You can watch Houston Life live at 1:00 p.m. Monday through Friday. If you miss today's episode, you can catch it at 8:00 p.m. or the next morning at 8:00 a.m. on the KPRC 2+ livestream. You'll find KPRC 2+ on your streaming device, on Click2Houston.com and on Click2Houston app.

HOUSTON – Cases go cold when investigators exhaust all available leads. Due to a lack of evidence, hostile or nonexistent witnesses or some other limitation, clearing these cases isn’t easy. Many remain a mystery.

But some cold cases are cracked. Big breaks, death-row confessions, advances in forensic technology happen. Sometimes, killers who’ve evaded justice for decades are eventually held accountable for their crimes, a measure of justice served, some semblance of closure achieved.

Here, we recall some of the high-profile, unsolved Houston-area homicides that were ultimately resolved. Whether it took years or decades to solve these crimes, we can finally say “case closed.”

On Dec. 14, 1969, a young single mother named Diane Maxwell Jackson arrived for her shift as a Southwestern Bell telephone operator in Houston. After parking her car in the company lot, she was forced into a nearby shack by an unknown individual and raped, strangled, and stabbed to death, the Federal Bureau of Investigation said.

After an investigation by the Houston Police Department identified no suspects, the prints lifted from Diane’s car were filed away. With no new leads, the case went cold.

Fast forward two decades and in 1989, Diane’s brother David Maxwell, a Texas Ranger, began reviewing the file on his sister’s death. He asked the Houston Police to review the original evidence and witness reports. The fingerprints lifted from the scene were searched against the Houston PD’s local fingerprint database and the Texas Department of Public Safety’s Automated Fingerprint Identification System. Neither searched yielded a positive ID. In 2003, the prints were run through the FBI’s fingerprint identification and criminal history system, IAFIS. Within five hours, the system found 20 potential matches, and a latent print technician identified a prime candidate—James Ray Davis, the Federal Bureau of Investigation reported.

Investigators learned Davis had a lengthy criminal record and had just completed a prison term nine days before Diane’s murder. Houston police located Davis living along the Texas-Arkansas border. After they presented Davis with these forensic evidence and photographs of the crime scene, he admitted to the rape and murder of Diane Maxwell Jackson, the Federal Bureau of Investigation detailed in a report.

He pleaded guilty in court, and on Nov. 24, 2003, 34 years after the homicide, Davis was sentenced to life in prison. 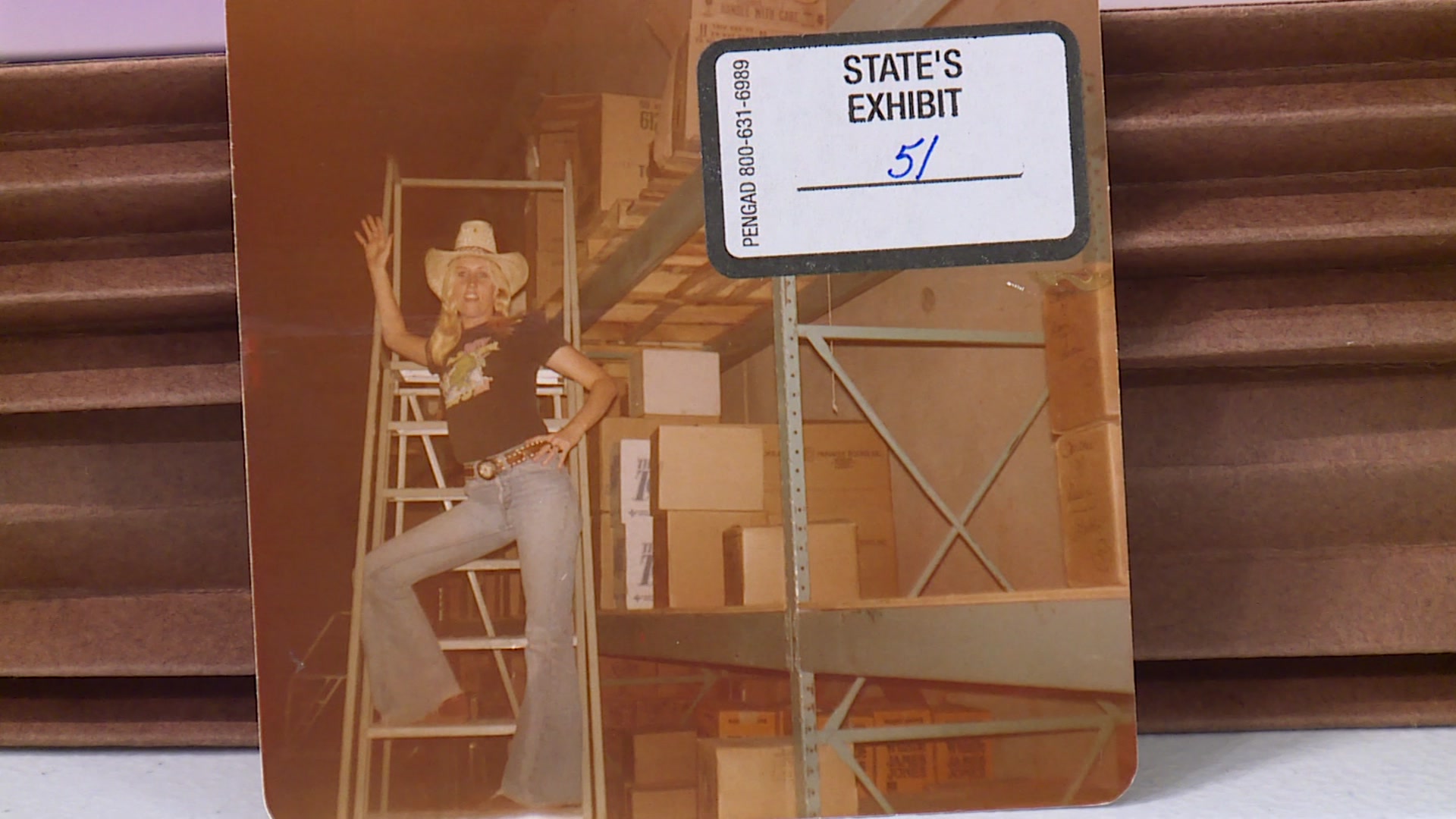 The man known as the “ice pick killer,” accused of four killings and at least nine rapes, was put to death by lethal injection in Huntsville, Texas, in June 2018.

Bible was sentenced to die in 2003 for raping and murdering Inez Deaton, a 20-year-old wife and mother of a toddler, in Houston in 1979. She was a friend of Bible’s cousin.

Bible raped Deaton, stabbed her several times with an ice pick and dumped her body by a bayou, court records show.

The case went unsolved for two decades, during which Bible “left a trail of carnage in his wake.” He committed numerous violent crimes, including killing his sister-in-law, her infant son, and his sister-in-law’s roommate, the Associated Press reported.

In 1998, while in custody for a rape in Louisiana, Bible confessed to Deaton’s killing, the Harris County District Attorney’s Office said.

For that crime, he was put to death.

“Some criminals’ actions are so heinous, they earn the label ‘worst of the worst,’” Harris County District Attorney Kim Ogg said in a statement.

In September 1979, an oilfield worker in Montgomery County found a girl’s body in a wooded area. She had been strangled and abandoned next to a pipeline along Exxon Road.

Authorities identified the girl as 12-year-old Lesia Michell Jackson, who had been reported missing from her Conroe neighborhood after an afternoon spent swimming with her friends. An autopsy revealed she had been sexually assaulted.

The identity of Lesia’s killer would remain unknown for 43 years.

In 2022, with information from “M-Vac,” a DNA collection technique originally developed to identify food contamination, authorities identified the killer as Gerald Dwight Casey, who was executed in 2002 for an unrelated capital murder case.

A statement released by Montgomery County Sheriff’s Office read, in part, “The tenacity and diligence in solving this case by a dedicated team is a reminder to our public and to those who commit crimes in our communities that we will never cease our efforts to solve the hardest of cases and bring closure to traumatized families. The Montgomery County Sheriff’s Office will continue to explore future advances in technology that can assist us in solving other cases currently under investigation.”

View Montgomery County’s unsolved cold cases here. Anyone with information in these cases is urged to contact the MCSO’s Cold Case Squad at (936) 760-5820.

In January 1981, in a rural area in eastern Harris County, a dog discovered a decomposed arm and brought it home, prompting a police search that located the remains of an unidentified couple.

The couple remained unidentified until October 2021, when genetic genealogists determined that the remains were those of Tina Gail Linn Clouse and Harold Dean Clouse Jr. After the discovery, their family members wondered what had happened to the couple’s infant, Holly, who had gone missing with them.

In June 2022, the Texas Attorney General’s Office announced that Holly, now 42 and a married mother of five, had been found living in Oklahoma. She was adopted after two members of a nomadic religious group left her at a church in Arizona. It was not known how they came into possession of the infant.

Holly’s adoptive parents are not suspected of any wrongdoing, investigators said.

“Thank you to all of the investigators for working so hard to find Holly,” said Donna Casasanta, Holly’s grandmother. “I prayed for them day after day and that they would find Holly and she would be all right.”

Though “Baby Holly” was found and reunited with her extended biological family, many questions remain, including who killed her parents and why. An investigation into their deaths is ongoing.

Anyone with information in the case is urged to contact the Texas Attorney General’s Cold Case and Missing Persons Unit at coldcaseunit@oag.texas.gov or at (512) 936-0742.

According to investigators, Lillie, who had been shot in the back of the head, died quickly while Yleen suffered terribly at the hands of the killer. An autopsy report revealed Yleen had not only been shot, but was also stabbed, bludgeoned and raped.

A neighbor told investigators he observed a man leaving the home, a duffel bag in tow. Suspecting the individual might be a burglar, the neighbor had confronted the man, who claimed his wife had kicked him out of the house. Believing the story, the neighbor permitted the man to walk away.

An extensive investigation was conducted, but no suspects were identified. With little to go on, detectives ran out of leads and the case went dormant for decades.

The Kennedy sisters were buried in a cemetery in Halletsville. Distraught by his daughters’ slayings, Jack had the word “murdered” etched on their tombstones.

Investigators reviewed the case in 2009 and used samples from Yleen’s sexual-assault examination to develop a DNA profile, which was then run through the Combined DNA Index System (CODIS), a national database containing DNA profiles of missing persons and convicted offenders, among others. The effort didn’t yield any matches and the investigation slowed to a standstill until late 2014, when a man facing charges in an unrelated crime offered to share information about the murders, Reuters reported. The man identified Edmond Degan as a suspect in the case.

Investigators discovered Degan still lived in the Houston area. Forensic evidence obtained from him was entered into CODIS, which determined his DNA was a high probability match to the evidence in the case.

Degan was ultimately convicted of Yleen’s murder. Though he received a 15-year sentence, he was released in December 2021, according to a local report.

MORE: Arrest made in Houston cold case: Man, 57, charged in 1984 killing in The Heights

View the Houston Police Department’s featured cold cases here. Anyone with information in these unsolved crimes is urged to contact the HPD’s Cold Case Squad at (713) 308-3618.

In June 2022, convicted killer William Lewis Reece pleaded guilty to murder in the deaths of a girl and two young women whose disappearances in Texas went unsolved for decades.

He pleaded guilty in the 1997 killings of 12-year-old Laura Smither of Friendswood, 17-year-old Jessica Cain of Tiki Island and 20-year-old Kelli Cox of Denton. He was sentenced to life in prison in each case.

“Twenty-five years is an awfully long time to be waiting for justice and there were number of years in there where we truly didn’t think we’d ever see this day,” said Laura’s mother, Gay Smither.

“I am just relieved that now the official record will show he was found guilty and convicted of taking my daughter away from us,” said Kelli’s mother, Jan Bynum.

Reece was serving a 60-year prison sentence for the 1998 Webster abduction of Sandra Sapaugh when in 2016 he broke nearly two decades of silence, accepted responsibility for the killings and began cooperating with investigators.

Following his trials in Texas, authorities returned Reece to Oklahoma where he faces the death penalty for the 1997 killing of 19-year-old Tiffany Johnson of Oklahoma City.

MORE: From Oklahoma to Texas, the work to bring serial killer William Reece to justice

DNA connected a Freeport woman to the 2005 double homicide of a couple who was found dead in their Liberty County home.

In July 2022, Texas Rangers and detectives from the Cleveland Police Department arrested Shelley Susan Thompson-Lemoine, 41, at a parole office in Angleton. She was charged with capital murder in the deaths of Antonio and Luz Rodriguez.

Investigators said, on April 14, 2005, the couple’s daughter found them dead in the home they shared on West Waco Street in Cleveland, Texas. Cleveland PD and the Texas Rangers investigated the crime until it ultimately went cold.

Sometime after their deaths, Thompson-Lemoine was convicted of another crime and was sent to the Texas Department of Criminal Justice facility. Upon entry into the jail, her DNA was collected, submitted to the DPS crime laboratory and later entered into the Combined DNA Index System, also known as CODIS.

In early March 2021, Cleveland PD detectives were notified of a hit from CODIS and they requested the assistance of the Texas Ranger Unsolved Crimes Investigation Program.

In 2022, the DPS lab confirmed the DNA match. In early July, investigators conferred with Liberty County District Attorney Jennifer Bergman-Harkness and, with sufficient evidence, an arrest warrant was issued for Thompson-Lemoine.

While an arrest has been made, the investigation was still active as of July 2022, officials said. Anyone with information is asked to contact the Texas Rangers or the Cleveland Police Department.

Briana Zamora-Nipper joined the KPRC 2 digital team in 2019. When she’s not hard at work in the KPRC 2 newsroom, you can find Bri drinking away her hard earned wages at JuiceLand, running around Hermann Park, listening to crime podcasts or ransacking the magazine stand at Barnes & Noble.