‘Soccer is an expression of who we are:’ Dobie boys enter playoffs district champs for 8th straight year

Pasadena Dobie senior Isaac Cortez often travels two hours, round trip, daily during the offseason to play club soccer in Aldine. It’s not the most decorated of teams, but it’s what he can afford.

During the season, after Longhorn practices, Cortez hurries to Home Depot to work the evening shift, making money to help pay to play club. He’s not alone. Almost every one of his teammates holds a job.

“It’s this mentality of knowing we’ve gone through struggles that not a lot of players from other regions and area codes (of Houston) have gone through,” Cortez said. “Waking up extra early just to catch a bus to a game. Going to buy socks right before a game to complete a uniform. It’s a different experience.

“We can do so much for this game that we all love, and we can make it the best experience.”

The byproduct of the commitment of Longhorns players is winning. Lots and lots of winning.

Dobie, of District 22-6A, has won eight straight district championships. Since 2015, the Longhorns hold an overall record of 92-6-14.

They enter Friday’s bi-district playoff game against Atascocita in Deer Park on an eight-game winning streak.

“We’re not just playing a game. We’re trying to do what’s right. We’re trying to teach the younger guys how to compete, how to act, how to stay out of trouble, how to improve every day. So, a victory for us on the soccer field just means more. Soccer is an expression of who we are.”

Manrique said winning district titles has become the expectation. A yearly goal. He demands the best out of his kids during practices so that they can give their all on game nights.

Manrique has implemented discipline, structure, and culture. But all of that means nothing without buy-in from the kids.

“South Belt is a soccer-rich community,” Manrique said. “It’s tradition. El Franco Lee Park has been here a long time. It’s not like Meyer Park or Bear Creek or Katy parks, or a club like Albion or Texans. You won’t find the Dynamo here. It’s pure South Belt. It’s independent, daddy-coached teams, but the kids get a base. They start at the park.”

‘REMEMBER WHERE WE CAME FROM’

It was at El Franco Lee Park in the late 1970s and early 1980s that a soccer league for various age groups was played. A team, South Belt Hotspur, was formed. It played other teams from Clear Lake and anyone anywhere else who wanted a game.

Because of soccer bonding generations of locals, Dobie players have pride in where they come from. They might show up to games in tattered, old uniforms, but they know once they take the field, looks don’t matter.

“In soccer, on the field, everything cancels out,” Manrique said. “We’re going to work harder, because we’ve had to work harder all our lives.”

To be able to play club soccer at a high level outside of school, at a reasonable cost, Dobie players must travel. They have to find a way to play competitively in the offseason. They know their competition is.

“The kids have to hustle,” Manrique said. “They’ve faced challenges like that all their lives, and they like to use it as a chip on their shoulder.”

Only a handful of Dobie players play club soccer. The rest don’t, simply because they don’t have the means. So Manrique tailors in-season practices to be intense and “as hardcore as possible.”

“The group of guys we have has a lot of heart,” Cortez said. “We’re really talented, but we’re passionate. We come from a community that’s not that wealthy, and every time we play, we remember everything we’ve been through, and we remember where we come from.”

Manrique’s practices are more competition-based than drill-based. Game situations are simulated consistently. Manrique likes to have players make their own decisions on the field. He awards freedom and trust for them to be creative.

He wants an attacking team, which means winning the ball back immediately, hustling hard, and running more and harder than the opponent.

Heart and effort is in the DNA of Dobie futbol.

“The kids see it’s game realistic and they’re getting something out of it, so they tend to give their all in practices,” Manrique said. “The intensity in practices is good because it complements what they can get outside of school. As long as they’re good on the ball, we’re going to work with them and try and polish the rest of it.” 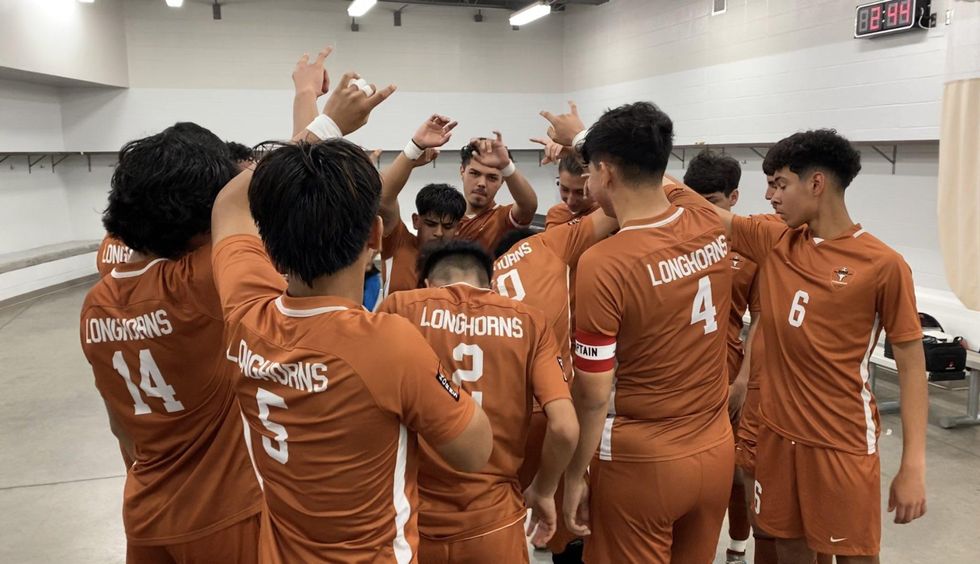 Schematically, the Longhorns are more of an amoeba, able to adapt and counter everything and anything thrown their way.

Assistant coach Nicolas Condon, who enjoys martial arts, describes what Dobie does as “soccer Jiu-Jitsu” because of how far Manrique will go to control a game.

Take Cortez, for instance. A four-year varsity starter, arguably the team’s best player, and one of its team captains. Last season, Cortez played exclusively in the center forward. This season, Manrique moved him up top on the left side, giving him more of an attacking responsibility. Cortez started his Longhorns career playing on both the left and right sides.

The Longhorns are constantly changing formations, player positioning, and tactics in practices. It’s a variable style of play.

“It’s his experience and his love for the game,” Cortez said of Manrique. “With that experience, we’re learning all the time.”

Dobie even went through drastic restructuring prior to this season, coming off a 16-4-1 2021 campaign in which the Longhorns won district, but fell to Kingwood in the first round of the playoffs.

Because of an abbreviated, stunted offseason in the summer and fall of 2020 due to COVID-19 restrictions, Manrique said the team’s ways were lost the following season. Bad habits were developed. Attention to details and rules were loose. Discipline was nonexistent. Structure was flimsy.

“A big part of our success is the constant day-to-day teaching,” Manrique said. “We struggled through the whole year, won district, but the playoffs showed we weren’t as good as we could have been.”

The day after the team was eliminated by Kingwood, Manrique told his players things were going to change. The 2021 season was not acceptable.

It was a frustrating year for a coach who harps that the “little things become the big things.”

“We pushed the standard higher on discipline, attitude and grades,” Manrique said. “We lost quite a few players because of all of that. This year, we had a full offseason, full training and a six-month window to really reinvent it.”

Now things are back on track. The Longhorns are optimistic they have what it takes to make a run to the state tournament like they did in 2017, when they fell in the semifinal.

“Ever since I got here to Dobie, it’s always been a great environment,” Cortez said. “It’s a good thing to play for Dobie, and it’s a great accomplishment to win eight straight district championships. It’s never really been a standard as much as it is a tradition. It was never about we had to win it. It’s a product of our passion and talent, to where we all just believed.”