(VYPE) – Life can be about measurables.

In baseball, it's amazing what the number 90-mph can mean.

Lake Creek's Ty Sexton is his from an athletic family. His uncle Andy Sexton was the head football coach at Magnolia before becoming the AD at Bastrop ISD. His other uncle Mike is also in coaching.

Ty has always been immersed in basketball, football or baseball growing up.

The 6-foot-7 dual-sport athlete recently committed to Texas A&M for baseball, but his journey has showed what he's made of when facing adversity.

"When I was a little kid, I was freakishly tall," he laughed. "I started out with basketball. In third grade, all my buddies on the basketball team where basically the same kids on the football team. That's how I got into football."

The Sextons moved to Montgomery when Ty was in the fifth grade and sports gave him his in. Basketball fell by the wayside in the eighth-grade as he began to really focus on baseball and football. He starred for the 12 Baseball Club.

"I never really thought the recruiting process in baseball was going to happen so early, but it did," he said. "I was calling major DI schools before high school. It was really hot until my sophomore season."

Sexton played at Montgomery High as a freshman but with the opening of new school Lake Creek, he was thrust to the forefront of the Lions' program as a sophomore.

"It's hard to explain," he said of opening a new school. "It was tough. We had to work twice as hard. We had new coaches and had to learn a whole new playbook… It was difficult but is was a good experience. That first varsity game? You talk about crazy butterflies. After the we got going in that first game, you were just in it."

He was the starting QB under new coach Pat Kennedy in the fall and hit 91-mph on the mound during the spring. Things were rolling on the field and in recruiting. 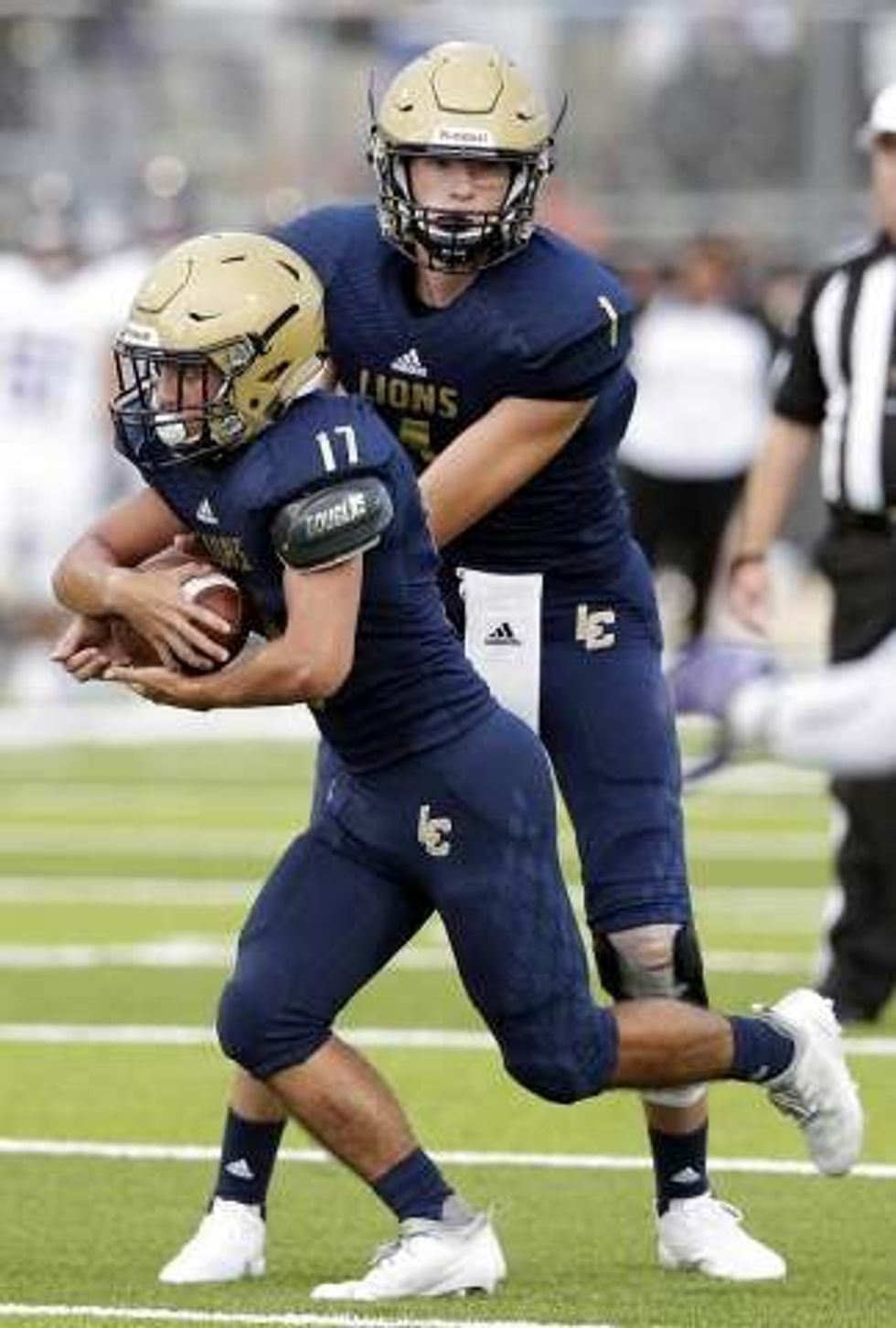 When working out with a teammate after his sophomore season, his shoulder popped out while doing the bench press.

"During the football season my shoulder was hurting but I just treated it and played the rest of the year," he said. "I would catch it dislocating sometimes but I just thought I was double-jointed or something. After it popped out working out, I had to have surgery pretty quickly."

When it rains it pours, right?

Sexton missed his junior season of football and rehabbed for eight months after his labrum surgery.

"I was able to see the game of football from an entirely different perspective," he said. "I saw it from up in the booth, which was really eye-opening. Now, I feel like I have a better idea of what defenses really look like and are trying to do."

After football, he started getting back on the mound. Slowly and surely his arm began to recover.

"I was invited to the Texas A&M camp in February," he said. "It was really one of my first times back after surgery and being sick and I was just sitting at 85-mph. The Aggie coaches stuck with me through all of this, but they didn't offer me officially at their camp.

"I just came back home and worked harder than ever. I knew I could my velocity back where it was as a sophomore."

In an intra-squad game that was on live steam, he hit that mark – 91-mph, consistency.

"I think several coaches were watching and my phone blew up," he said. "It was so strange that when I hit that number, that's all it took."

"Because of my frame, coaches and scouts love my 'launch angle'," he said. "My fastball comes at a downward arc instead of flat. They look for that and say you just can't teach height."

The Aggies offered and the rest is history. He will wear the maroon and white in 2021.

For now, Sexton has hopes for sports to start and enjoy his senior season. Being a dual-sport athlete will make for a busy 2020-21, but it also has its privileges.

“Most baseball kids don’t play football,” he said. “It helps me because it keeps my arm in condition all year. They have to work on it all year too but I do it playing a sport. It’s a different motion but football definitely helps my baseball.”