2 wind advisories in effect for 4 regions in the area

2 wind advisories in effect for 4 regions in the area

Power outages, no water, mold and pests are just a few complaints from residents at Cabo San Lucas apartment complex in SE Houston

SUGAR LAND—For a little more than 33 minutes of Saturday’s rivalry clash against Hightower, Ridge Point kept having flashbacks to the worst of its play that had plagued the early part of its season.

Inefficient offense. A defense that stayed on the field way too long, struggling on second and third downs. Penalties, many of the silly variety.

And, then, as quick as a Mason Dossett 100-yard kick return, the Panthers were back in it. Awake. Revived.

Dossett’s return got it going and senior defensive back Ryan Ramey’s block of a 27-yard field goal attempt led to a Taylor Davis go-ahead 75-yard touchdown return that finished it. Ridge Point outscored Hightower 25-0 down the stretch in rallying for a 25-17 win at Mercer Stadium in a game that will likely have considerable District 20-6A championship implications.

It’s the second straight win for Ridge Point, which started 0-2 against Austin Westlake and Dickinson. Hightower fell to 2-2 overall, 1-1 in district. Ridge Point is 4-1 all-time against Hightower in “The Battle of the Fort Bend Tollway.”

“Anytime you win is good, and anytime you beat your rival is extra good,” Ridge Point coach Rick LaFavers said. “I’m proud of them.”

Hightower had its way most of the game.

The Hurricanes led 17-0 on sophomore running back Austin Bowen’s 34-yard run with 3:38 left in the third quarter. Until then, Ridge Point’s offense was intercepted, turned it over on downs and punted twice. Hightower methodically chewed up clock and yardage with Bowen (28 carries, 153 yards, TD) and opportunistic explosive plays by junior receiver Zion Kearney (four catches, 71 yards, TD), all while star junior running back Jeremy Payne still awaits his season debut as he remains sidelined due to injury.

"There was still time on the clock, you know?” Ramey said.

Thirteen seconds after Bowen’s score, Dossett was trotting into the end zone after splicing up the middle and bursting to the right side.

The Panthers felt it coming. Early in the first half, Dossett missed a hole that could have led to a big-time return.

“Started by trying to find a hole at first, and I was struggling,” Dossett said. “But on that play, it was all the great blocking, seeing the hole and just hitting it. Great job by the blockers. Awesome play. We were bound for one. Each game, we kept getting closer and closer, and this game it finally happened.”

On the ensuing Ridge Point kickoff, a Hurricane muffed the return and it was recovered by Panthers senior receiver Antoine Thomas in Hightower territory. On the next play from scrimmage, senior back Ezell Jolly (16 carries, 104 yards, TD) sprinted around right end and scored on a 33-yard spree to cut Ridge Point’s deficit to 17-12.

Hightower chewed off almost seven minutes of clock to set up a 27-yard field goal attempt by Hudson Dumphy, who had drilled a 32-yard attempt in the first quarter. But Ramey came around the edge, blocked the kick and it bounced into the hands of Davis, who sprinted 75 yards to the end zone and Ridge Point’s first lead of the game with 8:36 left in the fourth quarter.

“Special teams is a big factor. It’s a big part of the game,” Ramey said. “We work a lot in practice on special teams and blocking field goals, and that’s all it was. Our coaches always tell us to keep pushing through. Even when you’re tired, even when it hurts. We pushed through.” 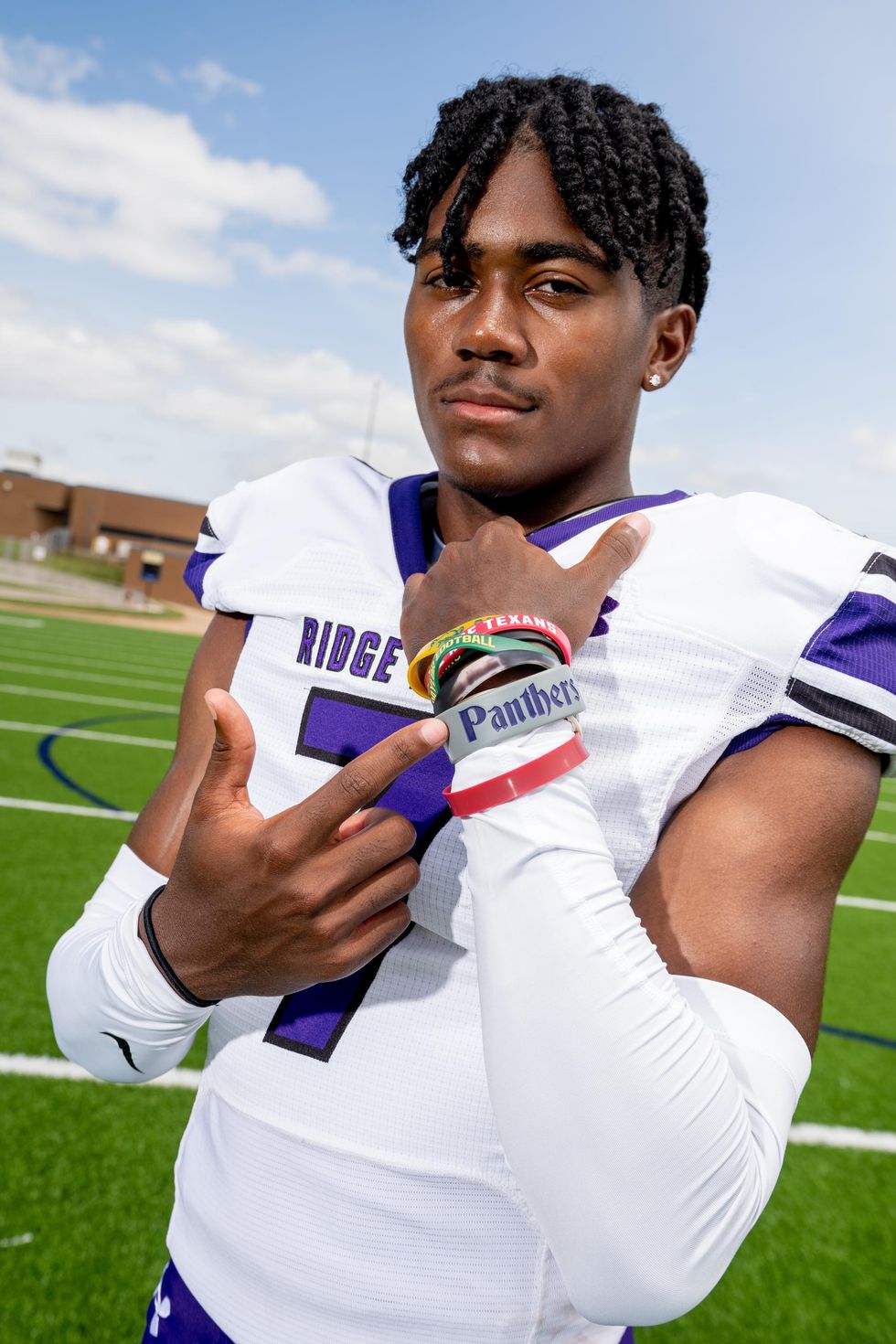 Hightower punted on its next drive. The Panthers added breathing room on an 18-yard keeper by sophomore backup quarterback Austin Carlisle, brought into the game for his running ability on the final drive.

“All night, first half, we just couldn’t get a break, whether it was a penalty, or a fumble on the ground we didn’t get, or a third-and-six and they get seven,” LaFavers said. “We couldn’t get there, and needed something, and that kick return really gave us something.”

“Don’t flinch. Just keep playing,” LaFavers said. “That’s what ‘TPW’ is about—tough people win. Thank God, it played out. We build our program on keep fighting and good things will happen, and that’s a good example.”

It’s a different Ridge Point team that started 0-2. Players and coaches attest that it starts from within.

“It’s really the chemistry,” Dossett said. “The first two games, we were just trying to gel as a team. Now we’ve got that chemistry, and that’s huge for our team.”