Even though the previous two seasons produced records of 0-10 and 1-7, respectively, the third-year Cougars coach knew things were going in the right direction during the spring and summer. Players felt it, too.

Cinco Ranch got it in their 35-14 Week 1 win over defending District 13-6A champion College Park. And it was confirmed in, oddly enough, a loss, though a competitive and eye-opening one in a 32-28 setback to then-No. 7 state-ranked Tompkins in Week 5.

So, while Friday's 44-0 Class 6A-Division II bi-district playoff rout of Fort Bend Bush at Rhodes Stadium may have shocked some—many?—it was of no surprise to the Cougars.

"That College Park game was huge from a belief standpoint," Dudley said. "As a coaching staff, until you see it happen, you still have a bit of hesitancy on if we were really ready to bounce back from 0-10 and 1-7. The program has come a long way through these last three years. It means so much to these seniors who saw us through it. They came through, never wavered, stayed with the process on and off the field, and to see them celebrate a playoff victory … it's a real special night."

It was the first playoff win as a head coach for Dudley, whom Dycus said "has been the light in the tunnel for us."

"It's a combination of the culture we have off the field," Dudley said. "The family atmosphere, and the core values of accountability, commitment, being tough and being disciplined. On the field, we've got experienced guys who've gotten better each year, more stability as far as the offensive and defensive systems, and it's really shown this year. It's good to have our program back in games like this. We just want to keep this thing going."

Typically a prolific pass-first offense, Cinco Ranch came out against a stout Bush defense running the ball, early and often. Even without starting junior running back Sam McKnight, who was unavailable to play.

Junior Eric Eckstrom, who converted from safety to running back during the summer, stepped in and played heroically in McKnight's place, rushing for a game-high 105 yards and three touchdowns on 27 carries. He also caught two passes for 45 yards. 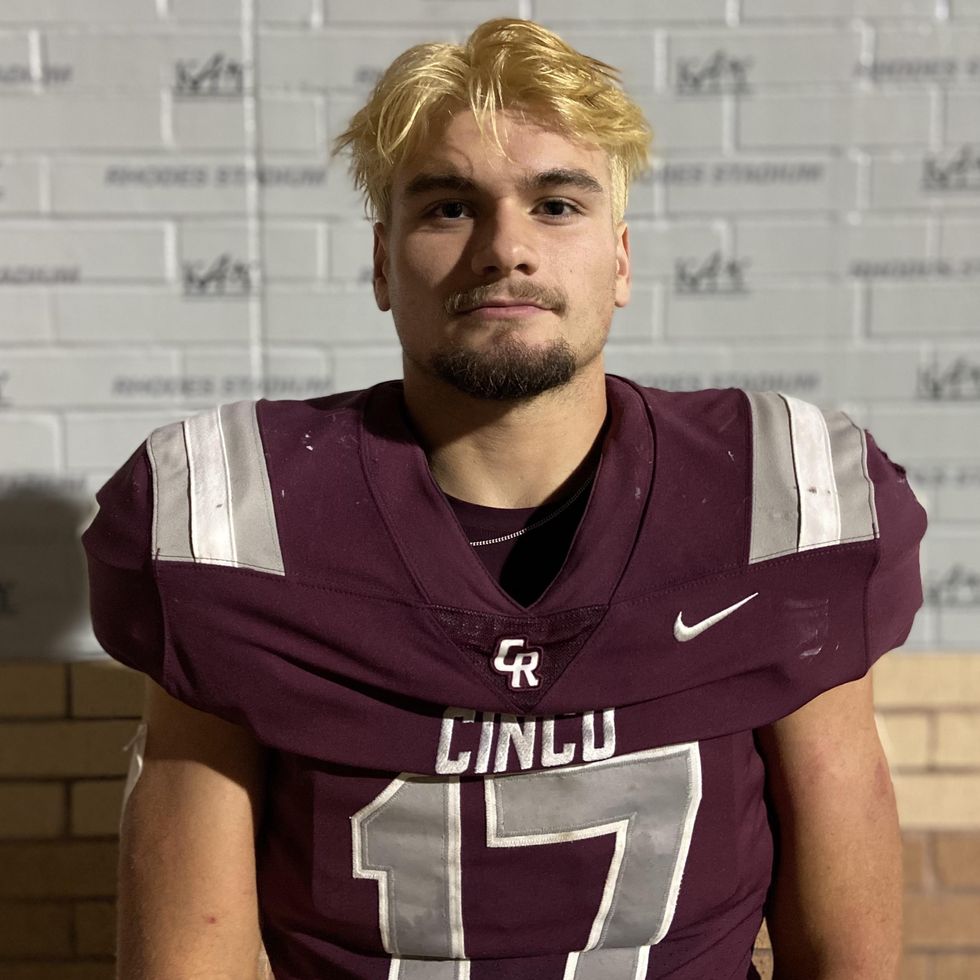 By the time Cinco Ranch attempted its first pass, Eckstrom, who entered the night with 211 yards and no touchdowns on 50 carries in 10 games, had scored two touchdowns. On the Cougars' opening drive of the game, which he finished off with a six-yard scoring run, Eckstrom had 61 rushing yards.

"I'm blessed that I was able to have this opportunity," Eckstrom said. 'Working north and south, you have to pick up yards where you can get them. When you see green field, head that way. Shoutout to the O-line. The coaching, they got us prepared. The receivers put in work on their blocks. It was a whole team effort."

Dudley said he was proud of Eckstrom running the ball so well against a Bush defense that allowed an average of 101.3 rushing yards per game during the regular season.

"He's a gamer," Dudley said. "We wanted more toughness this year at the running back spot, so we moved Sam over and Eric over (from defense). He's a tough, hard-nosed kid. He's not afraid to lower his shoulder and fall forward. He's got good patience back there and lets things develop in front of him."

Junior RB Eric Eckstrom gets @cincofb on the board. 7-0, 3:50, 1Q. Big drive for the converted linebacker. Had 61 yards on eight carries that drive. #txhsfb @CincoAthletics pic.twitter.com/cSx57iS4Rc

Instead of the dynamic passing game setting up the run game, it was vice versa for the Cougars. Cinco Ranch junior quarterback Gavin Rutherford, two games removed from setting the program's all-time single-game records in passing yards and passing touchdowns, only attempted three passes in the first half for 40 yards and a touchdown but completed seven of nine passes in the second half for 143 yards and a touchdown.

Rushing yards accounted for only 30.3 percent of Cinco Ranch's total offensive yards in the regular season. In building a 21-0 first-half lead, the ground game accounted for 60 percent of the offense.

"They're a physical defense and do a lot of press man coverage on the edge," Dudley said. "You've got to make them pay for that and run the ball if they're going to press up. A lot of ours was tough yards inside too, not just the edge. Our offensive line did a great job of moving people up front."

Defensively, Cinco Ranch was all over Bush's running game. Senior running back Adrian Cormier, a Weber State commit and District 20-6A's second-best rusher, was held to four yards on five carries, all in the first half.

BIG stop by @cincofb as @OderaN12 picks off Tyler Hilder in the end zone. That’ll cap the first half as the Cougars lead 21-0 at the break. Dominant first half for Cinco Ranch. #txhsfb @KatyISDAthletic @CincoAthletics @CougarnationJ pic.twitter.com/yUk2Rtob1T

Cinco Ranch, even without star linebacker Kasey Murry, who was out with a concussion, surrendered just 107 total yards. The run-oriented Broncos, who finished their season 5-6, had 15 carries to 24 pass attempts.

"We wanted to strangle them," Dycus said. "We wanted to suffocate them. We wanted to make them uncomfortable and do what they didn't want to do. We were lighting them up every time. Our mindset this week was something I've never seen before as a three-year letterman. That was heart, that was wanting execution on everything. This game was everything for us."

And as far as what's next?

“Pick up the pen and write the next chapter,” Dycus said. “We’re not done here.”