As a junior at Katy Morton Ranch High School, Tamyra Mensah-Stock often declared her ambitions to anyone who cared to listen.

"I have a heart of gold!" Mensah-Stock professed, whether it was to her best friend Nicole Benton, Morton Ranch head wrestling coach Mark Balser, or college coaches recruiting her. "I'm going to make it to the Olympics."

That she had barely been wrestling for a year was irrelevant. The considerable weight of her dream was merely a pesky deterrent.

"But the process of getting there was unbeknownst to me," the 28-year-old Mensah-Stock, Morton Ranch Class of 2011, says now. "But I knew it's what I wanted. I was going to do it any way I could."

Eleven years later, she did.

Mensah-Stock, a Chicago native who grew up in Katy, Texas, is an Olympian, mission accomplished, after repeating as the 68-kilogram (150 pounds) gold medalist at the U.S. Olympic Trials in April to qualify for the 2020 Summer Olympics later this month, July 23-August 8 in Tokyo.

Mensah-Stock is one of the best in a sport she once considered "disgusting" and "dirty." A track and field sprinter and jumper since middle school, Mensah-Stock scoffed when her twin sister, Tarkyia, older by 55 minutes, suggested she join the wrestling team during their sophomore year.

"They said they need some athletic girls to join," Tarkyia pleaded.

So, Mensah-Stock tried it. And hated it. Immediately.

"In track and field, when I run, I'm in makeup, I have my earrings, my hair is permed, I feel pretty," Mensah-Stock said. "Wrestling is the complete opposite. They were messing up my hair. I couldn't wear eyeliner or earrings. Within a week, I wanted to quit."

But, through Tarkyia's tireless persistence, Mensah-Stock kept with it. To this day, she gives a lot of credit to her sister for pushing her to stick with the sport and not let her get dismayed with its raw vulnerability and barbaric nature.

And eventually, sooner than later, Mensah-Stock started winning. A lot.

"In my first dual meet, I beat a state qualifier a weight class above me," Mensah-Stock recalled. "I took her down and pinned her, and I was like, 'Ooooh, I like this. That was nice. I could get used to that.'"

Mensah-Stock found her purpose on the mat. Not only did she have the skills and desire to be a great wrestler, she felt wanted.

Wrestling offered a sense of belonging for someone who felt like she hadn't belonged.

"I was bullied in track and field," Mensah-Stock said. "They would demean me and make fun of me, whereas in wrestling, they were loving and supporting. Even though it was the raunchiest sport ever in my mind, they were the sweetest people. They were amazingly positive. That captivated me the most."

Mensah-Stock admitted she could be a pushover at times. She has a timid personality, so she was an easy target to be picked on.

She vividly remembers one of her track teammates trying to get her to quit wrestling by shoving her against a wall of lockers.

"It was bad," Mensah-Stock said.

But Mensah-Stock found acceptance and positive reinforcement in wrestling, so much so that she eventually gave up track and field her senior year, despite being the only senior and running all three relays.

Through her teammates, bonded by hellacious practices and the physically and mentally exhausting measures of cutting weight, Mensah-Stock reached heights she never before considered. Through Balser, her confidence blossomed. He held her accountable.

When Mensah-Stock performed a certain move during a match, one of the easier ones to execute, Balser would get furious.

Where she oftentimes resorted to relying on her natural athleticism and quickness to win, Balser forced Mensah-Stock to lean on technique and skill.

Balser is not one for the easy road. Winning is earned. But what wins over his athletes, especially Mensah-Stock, is he knows how to balance his no-nonsense demands with empathy and compassion.

When Mensah-Stock's father passed away during her sophomore year, she was in shambles. More than anything at that time, she just wanted to quit wrestling. Her dad was her biggest fan.

"He died leaving one of my tournaments, a car accident where he fell asleep at the wheel," Mensah-Stock said. "It was heartbreaking."

Balser and his beloved late wife, Kelly Balser, went to be by Mensah-Stock's side. They offered a shoulder to cry on and gave her and Tarkyia a blanket.

"I dropped out of a few AP classes, but I was not leaving that family," Mensah-Stock said. "Coach Balser is the sweetest, aggressive, stone-cold man that I had ever met. He's just so understanding and willing to work with troubled kids, be it with family issues or grades or whatever. He just wants to see the best in people."

Mensah-Stock went to the state finals her sophomore year in 2009, the first year she wrestled. She won state championships in the 138-pound and 148-pound classes, respectively, the next two years, earning an opportunity to wrestle at Wayland Baptist University, where she was a two-time national champion (2014, 2017).

A scholarship is now endowed in Mensah-Stock's name at Wayland Baptist.

"I even told her, 'Hey, you're going to be an Olympian someday if you want to be,'" Balser said. "She had such athleticism and a hard-working determination. She's worked hard, chased her dream and put herself in the right opportunities with the right people to help get her there." 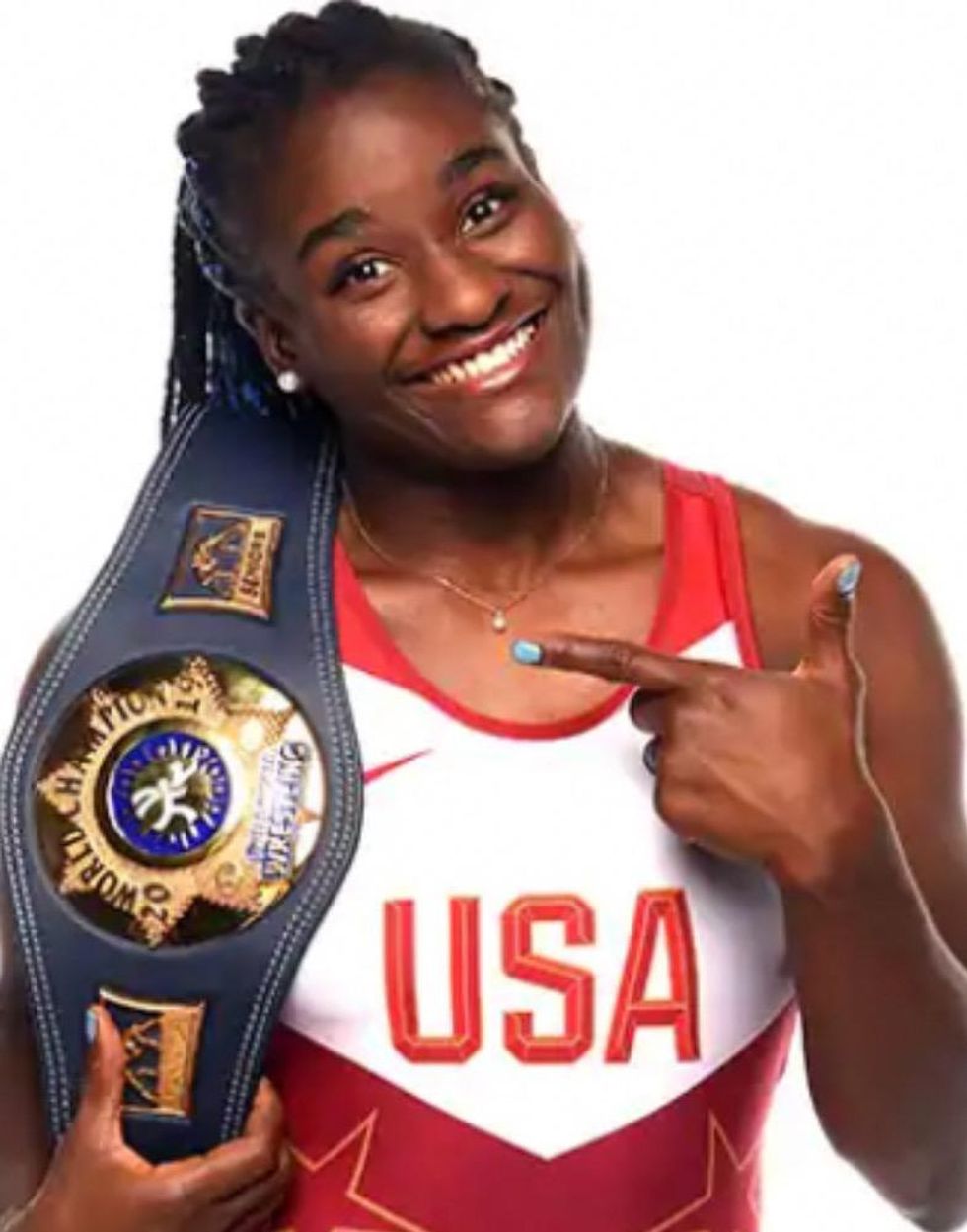 In 2016, Mensah-Stock won the Olympic Trials, but did not qualify for the Rio Olympics in Brazil because she still had to finish in the top two of a last-chance qualifying tournament. She finished third.

"On the men's side, top three go," Mensah-Stock said. "For women, it's top two. It was so weird. To this day, I haven't gotten an explanation why. Because at (April's) Olympic Trials, they had true seconds and true thirds. The women I lost to (in 2016) won the tournament, and the people that took second, I didn't get a chance to wrestle. So, I didn't get a chance at a true second. It was devastating."

When the opportunity arrived to compete for a spot again at the Olympic Trials in early April in Fort Worth, knowing a win would solidify her spot in the Olympics, Mensah-Stock's mindset was different. Her attitude was defiant.

"I wasn't going to let anybody take this from me," Mensah-Stock said. "Anyone. No matter how I was feeling, no matter what, I was like, 'Tamyra, you're making this Olympic team.' Last Olympic Trials, I was, 'Let's go see what happens.' This time, I was, 'No, this is mine!'"

Mensah-Stock showed off her entire repertoire. She has a lot more in her arsenal now than two years ago. She is a better wrestler, more in tune with her body. She is stronger, faster. More of a sound mind.

"The only thing that holds her back is herself," said Balser, who was in attendance in Fort Worth. "Wrestling is such a mental sport, and I can see when she gets in her head and is tentative and isn't as aggressive. I saw some of that at the Olympic Trials, but she worked through it. That's a key to her growth. She recognizes her biggest opponent is probably herself."

But she's bummed there will be no closing ceremonies due to COVID-19 protocols; she loves seeing dances. She's disappointed foreigners won't be able to celebrate and cheer in the stands.

As far as what lies ahead for her after the Olympics, Mensah-Stock is unsure. She and her husband, Jakob, a former Morton Ranch wrestler himself, have talked about starting a family. She has considered coaching wrestling as the next chapter of her career.

Balser, for one, thinks Mensah-Stock, an "outstanding ambassador for the sport," would make a great coach. Ultimately, time will tell for what's next after her time on the world's greatest stage.

"The growth of girls wrestling since she started has been astronomical nationwide, and she's been part of that," Balser said. "She's done the right things. To see kids achieve their goals is an amazing thing."