3 warnings in effect for 4 counties in the area

3 warnings in effect for 4 counties in the area

Suspect who allegedly killed ex-wife, man in Spring Branch turns himself in to authorities after horrific shooting, HPD says

When Janet and Morne Stramrood moved from Johannesburg, South Africa in 2001, it was supposed to be just for a couple of years. In the midst of what was set to be a short stint in the United States, their first daughter Lorelai arrived.

At that time, little did Janet know 19 years later they would be sitting in the stands on a Friday night watching their daughter send away kickoffs and be the full-time extra-point and field-goal kicker for the Tomball Memorial Wildcats football team.

"We know nothing about football, we grew up with rugby and cricket," Janet said with a chuckle. "I never learned about football because I have two daughters. I didn't even think I would have to learn the game. Of course, she would throw a curveball at me.

"I'm now learning the game sitting in the stands with all the parents around me educating me on what she's doing and all of that. It's been interesting."

Lorelai, a senior at Tomball Memorial, has always been interested in kicking.

The interest has spurred out of her soccer career, which has been a successful one, earning her a scholarship to Baylor University. Lorelai is slated to early enroll at Baylor in January to start her collegiate career.

"Since freshman year, it has been a thought in my mind as I have always had long range goals in soccer," Lorelai said. "It just hasn't been able to become a reality as I had always done volleyball, but this year I decided to leave the TMHS volleyball program."

In the summer, when Lorelai heard that a kicker for the team had been hurt and was out, she saw that as an opportunity to approach the football coaches about her wanting to try and kick for the team. One day after a football workout, Lorelai headed out to the field where she normally would be trying to ping a ball into the back of a goal. Instead, this time she was trying to boot a football through the uprights and down the field. 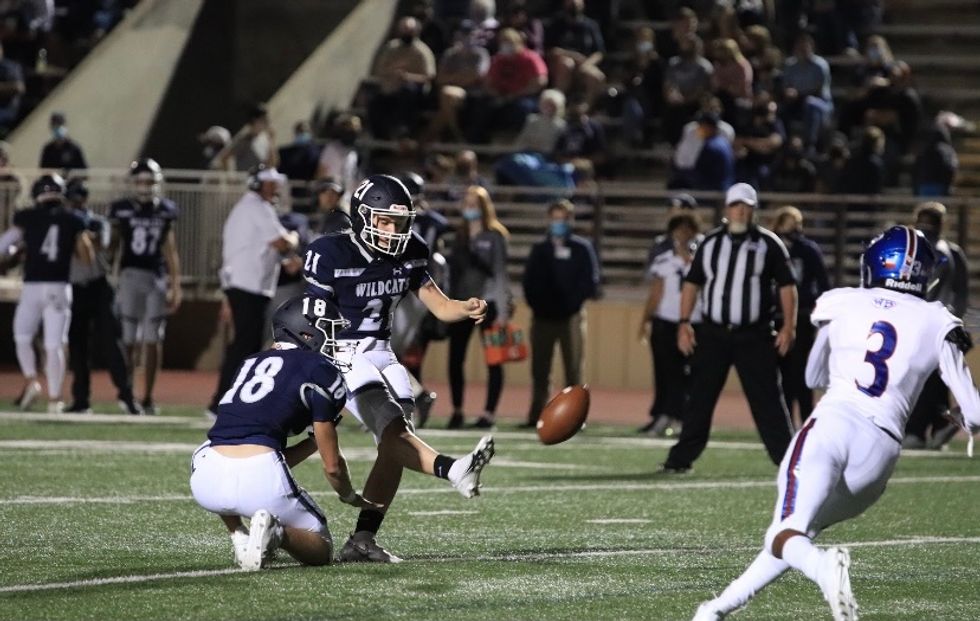 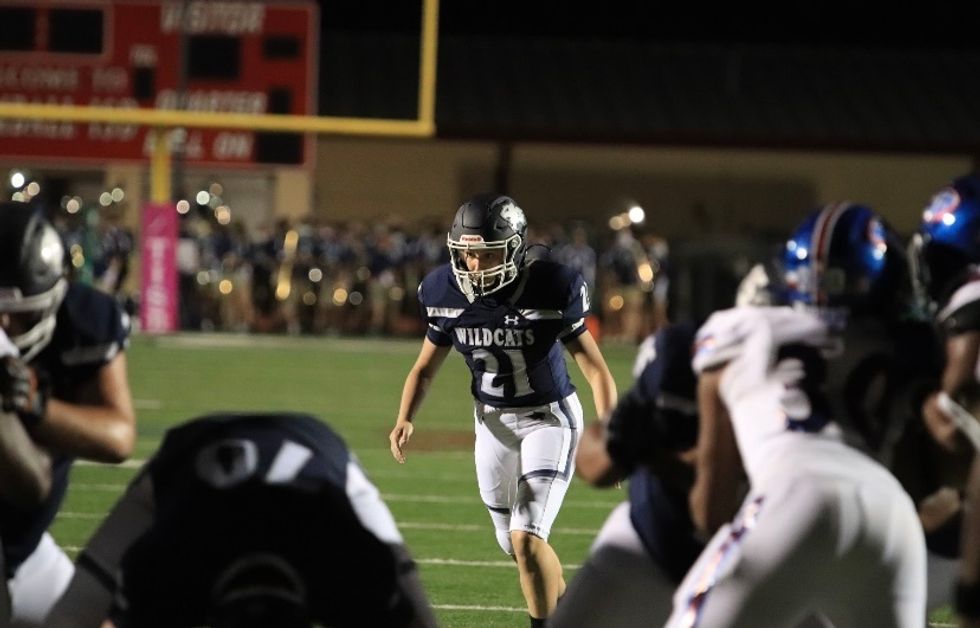 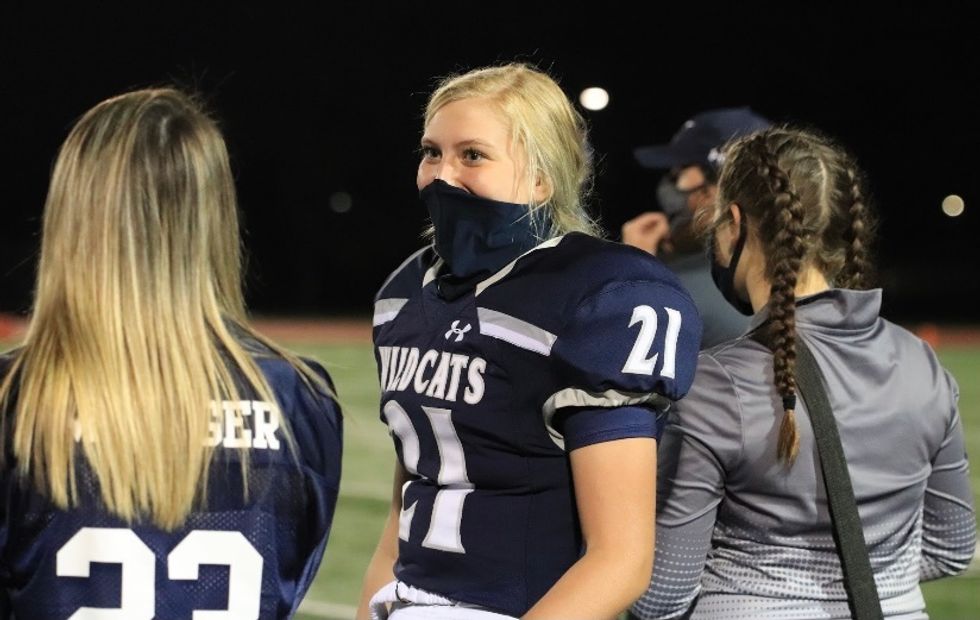 "We knew who Lorelai was," Tomball Memorial head football coach Sam Parker said. "Then we saw her kick, and it was like 'wow, she's really good'.

"So, when it all first happened it was just SAC camp, just working out, not sure how serious she was. So, I asked 'Are you in?' She said. 'Coach I'm in'."

During the summer, there were many Saturdays Parker said he would arrive and Lorelai would be there with a bag of footballs practicing. Putting in the work to earn the job.

"There's other kickers we had, they tried out and we had practice. She was the best one," Parker said. "That's the reason she's playing. Her being a girl had zero to do with if she's kicking or not. It's just inspiring that she is a girl."

In Tomball Memorial's season-opener against Langham Creek on September 24, Lorelai – wearing No. 21 – made her football debut becoming the first girl in program history to play.

"The first game I was very stressed out and felt a lot of pressure on my shoulders being the first girl kicker," Lorelai, who's younger sister Natasha plays soccer at TMHS, said. "I typically handle pressure very well, so when I went on for my first kickoff I was talking to myself saying 'muscle memory. You know what to do and how to do it. Confidence!'"

The first two games have gone well, including hitting all three extra-point attempts against Beaumont West Brook, the last one sealing a 66-63 victory for the Wildcats and a 2-0 start this past week.

"Being a Division I soccer player going to play at Baylor, she naturally has a strong leg and has worked her tail off to become a great soccer player," Parker said. "We are reaping the benefits of that in football."

Seeing Lorelai have success on the field is nothing new for Tomball Memorial girls' soccer coach Elizabeth Cavazos. She saw Lorelai rake in the District 17-6A MVP award for soccer a year ago.

"Watching Lorelai kick is so fun,"' Cavazos said. "The kickoffs are my favorite because it looks like she's leading the team into battle! It doesn't surprise me that she is doing it, and honestly, the precision and distance she is getting doesn't surprise me either.

"She's an athlete and this is just taking one small portion of her stellar soccer game and highlighting it. On the soccer field, her presence in the air is her trademark."

Lorelai's soccer portion of her high school career is over. Due to her early enrolling at Baylor in January, she will miss out on her senior season.

Knowing that, Janet is enjoying the fact that Lorelai is getting to experience the portion of honors that come with being a senior - such as senior night - through being on the football team.

"For her, I think this has been nice because she was going to miss out on some things like Senior Night with soccer," she said. "It's nice that she's had the opportunity to enjoy those moments of being a senior because she's cutting her year short. And she's been having a blast. She is loving it.

"Not taking away from soccer, because soccer is her passion."

After playing football on Fridays, Lorelai was then playing on a soccer field in Austin scoring a pair of goals on Sunday. What Lorelai didn't expect from this was the inspiration that she is giving to young girls in the Tomball community.

"What's been great is she's been such a role model," Janet said. "You see all the little girls just are excited. I don't think she expected it. I think she was quite shocked at how everyone is excited. It's been quite the experience for her."

The inspiration has even trickled down to Parker's nine-year-old daughter Elly – who thinks Lorelai is the "biggest hero in the world".

"I love that my daughter is inspired and excited, but I would just be as inspired if she had picked one of the boys," Parker said. "I love that there is a girl that she can look up to. I want her to see whatever she wants to do she can accomplish. I think the biggest thing out of this is you can accomplish whatever you want whether you're male, female, black, white. You go do it.

"I'm excited my daughter loves it. I'm excited that it inspires her but I also want her to understand what it's taken Lorelai to get here. That's more of what I'm teaching my daughter is look what she's had to do to get stronger, a strong leg and kick."

Cavazos added: "She's paving the way for more girls to find their place in athletics -- whether it's on the football field or in other sports ventures that aren't as widely known. She's a fantastic role model and I know young girls in the Tomball area and in Houston, will be looking up to her and remember her when they make decisions in the future."

"Being on the football team is like no other sport I've ever been in and I want other girls to feel the same energy and love it like I do," she said. "I wasn't expecting to have the impact that I've already been having. My advice would be to go and just do it. It really is an experience like no other. Just remember that it is a lot of pressure and will take a lot of fine tuning to get everything down, but you won't regret all the time and effort because it will pay off and be 100-percent worth it.

"And I've truly been blessed that our high school coaches have been so accommodating to me and have been so encouraging to me in giving me this amazing opportunity."