BROWNSVILLE — U.S. Rep. Vicente Gonzalez has a message for South Texas: Democrats are here to stay.

The Democratic congressman vanquished the short-term incumbent Rep. Mayra Flores, R-Los Indios, on Tuesday in this hotly contested race to represent the 34th Congressional District, which Republicans had targeted as pivotal to their efforts to sway more Latino voters to their camp. Decision Desk HQ called the races for Gonzalez shortly after midnight.

The race was a high-drama, multi-month affair of desperate pleas, dashed hopes and political gamesmanship that highlighted the stakes of when national forces come into play in a hyperlocal race.

“They spent over $7 million against us, spewing lies and hate and disinformation,” Gonzalez, D-McAllen, said at his election night party here. “Even with these large investments, we showed the Republican party that South Texas is not their home.”

Gonzalez went into the race after redistricting caused him to move from the neighboring 15th Congressional District, with a massive war chest and years of experience under his belt working in the region as a lawyer. Despite a rapidly narrowing lead as Election Day approached, Gonzalez expressed confidence that he would be able to take the seat back for his party.

Winning the 34th district would have been a crowning achievement for Republicans. It was the most favorable district for Democrats among the three competitive South Texas races this cycle, and Republican operatives admitted early in the race that they faced major headwinds.

Republicans’ efforts for a takeover have been simmering in South Texas for years. During the 2020 cycle in the neighboring 15th district, Monica De La Cruz, an outspoken critic of Democrats’ long-standing control in South Texas, came only 3 percentage points of winning in her contest against Gonzalez. That was despite the incumbent Democrat spending well over twice as much money in the race. De La Cruz ended up victorious Tuesday in her race against progressive newcomer Michelle Vallejo in the most competitive congressional race in Texas — an outcome Gonzalez called “tragic” in a brief interview Tuesday night.

De La Cruz asserted her message of family values and support for border security forces would resonate better with the majority-Hispanic population of South Texas than the modern Democratic Party. Flores, who was inspired by De La Cruz’s run, took on much of the same message in her campaign, tapping into her past as a Mexican immigrant raised to vote Democratic who grew to be a Republican.

The near-success story in 2020 had national Republicans sold. When the 34th seat opened up this year for the special election because former U.S. Rep. Filemon Vela vacated his seat early, Flores and her allies spent over $1 million in TV ads and ended up securing the seat. 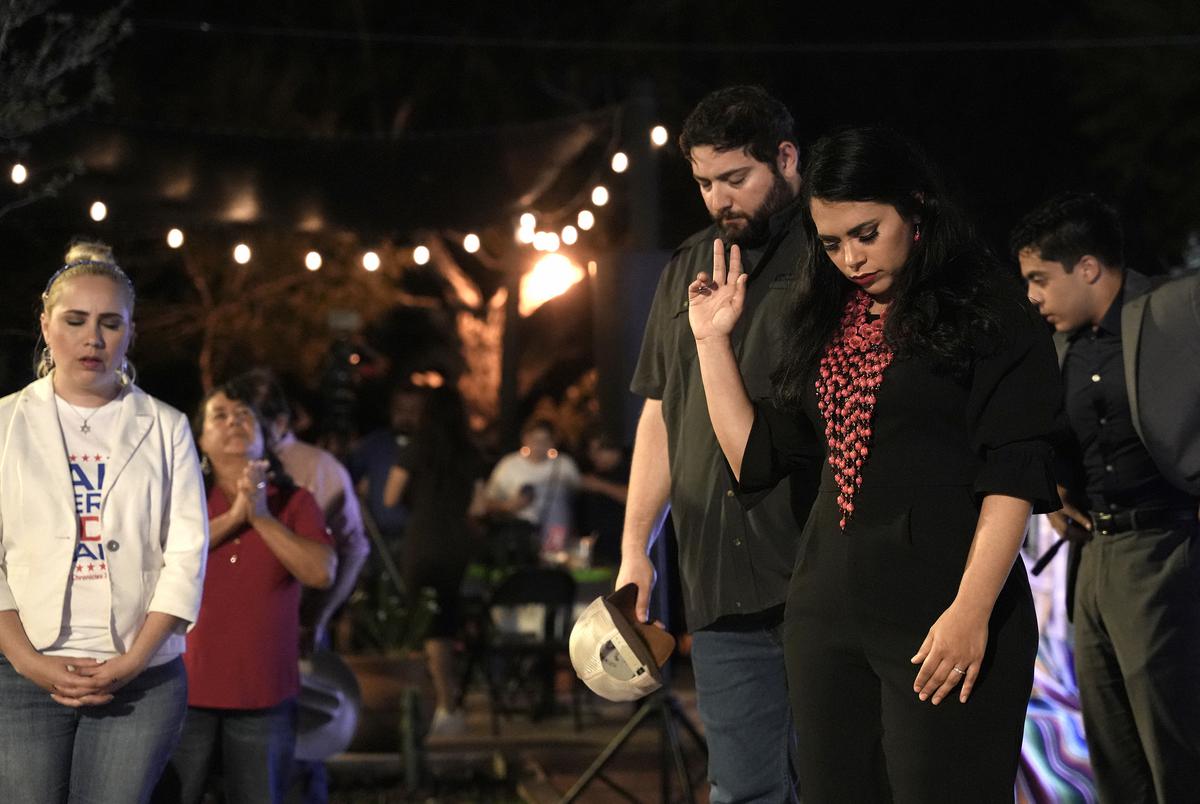 Mayra Flores at her election night event in Weslaco on Nov. 8, 2022. Credit: Brenda Bazan for The Texas Tribune

National Democrats, meanwhile, didn’t bother matching for a seat that would be up for election only five months later with new district lines that would be far more favorable to them. Redistricting turned the district from one that voted for Biden with a 4-point margin to one that, had the current lines been in place in 2020, would have voted for him by over 15 percentage points. Democrats also had to look at a national terrain and allocate scarce resources in a cycle when their rank-and-file members were expected to take a serious beating.

But in Texas, Democrats warned neglecting the 34th district was a serious mistake that paved the way for a stiffer challenge in the general election.

And as Election Day drew nearer, Democrats had growing reason to worry. National forecasters pushed their needles toward Republicans roughly a month before Election Day, with assessments going from leaning Democratic to a tossup race. The generous pro-Biden voter margin also couldn’t be relied on for a guaranteed win, with districts across the country with similar margins for the Democrats becoming increasingly competitive.

As Gonzalez ramped up his operation to respond, Republican operatives said it was a further sign that the three-time congressman had arrogantly assumed he’d had this race in the bag and was scrambling to respond.

“He had no idea he was gonna have to be running against an incumbent. He just didn’t see this coming,” Flores said in a September interview.

But Gonzalez’s allies firmly rebuffed any notion that he was panicking. The congressman has long sounded the alarm over the growing influence of far-right conservatism among Latino voters in border communities, said U.S. Rep. Veronica Escobar, D-El Paso. And members met with Democratic Congressional Campaign Committee Chair Sean Patrick Maloney and other members of House Democratic leadership earlier in the year to discuss how competitive these races would be, according to a source familiar with the meeting.

The organization’s investment in South Texas surpassed $7 million for this cycle, including over $1.2 million on TV and radio ads and $250,000 on paid canvassing in the 34th district.

Gonzalez acknowledged early this fall that this would be his most competitive race since his first run for office in the crowded 2016 Democratic primary in the 15th district, and he has adjusted his strategy to match. He spent well over $3 million this cycle and saturated the district with ads. He sat for more TV interviews and called out Flores for not agreeing to a televised debate using the slogan “Where is Mayra?” (The congresswoman’s team said she could not partake due to a scheduling conflict) Only two years ago, De La Cruz criticized Gonzalez for the exact same thing, using the slogan “Where is Vicente?”

“Everything from social media to YouTube is nothing but ads, ads, ads,” said Krys Palomino, a voter at the Weslaco Business Visitor and Event Center polling location on Tuesday. Palomino said she voted for Gonzalez.

Gonzalez also adopted a more bellicose tone. The congressman used particularly dismissive language toward Flores, saying she was essentially a seat warmer and a pawn of a larger Republican ploy to “buy” the district.

“Vicente has always been an aggressive campaigner,” said Jose Borjon, Gonzalez’s former chief of staff who still advises his campaign. “He believes in knocking on doors. He believes in contact with people. He is extremely methodical and extremely into the data.”

Flores, meanwhile, led a robust ground operation to match, posting numerous updates of her block-walking operation and predicting that her face-to-face contact would be the key to breaking off a multi-generational tradition of voting Democratic in the area. She likewise spent over $3 million in this cycle to get out her message and has introduced a flurry of legislation in the weeks before Election Day to make up for her lack of a legislative record in Congress.

Flores joined Congress during an awkward period when party leadership was focused on major packages in the works for months and as rank-and-file members broke to start campaigning. The bills she has introduced focus on conservative and regional priorities, from redirecting $11 billion from the IRS to “harden” schools to compelling law enforcement to prioritize criminals who are in the country illegally. With Congress in recess, they have not had a chance to go anywhere yet.

Republicans also unleashed a flurry of attack ads against Gonzalez, portraying him as a corrupt career politician who is unfamiliar with the everyday needs of the new district.

They have accused him of defending a convicted human trafficker who transported undocumented immigrants across state lines (Gonzalez’s legal work was mostly defending customers from corporate malfeasance and he was assigned to work on the case by a federal judge), and text messages circulated in the district Monday that appeared to show Dan Sanchez, Flores’ opponent in the special election, endorsing the Republican (Sanchez said the texts were fake and Flores said she was not responsible for them).

“I intend to hold them responsible for that at the end of this election,” Gonzalez said during a brief interview Tuesday at a polling station in Elsa. “I wasn’t a criminal lawyer, so they’re going to find out what kind of lawyer I really was.” Sanchez also said Tuesday night that he was considering a civil suit against Flores.

The candidates also had their share of unforced errors. After Gonzalez paid for advertising with a Texas political blogger who used racist and sexist language against Flores, the congresswoman accused Gonzalez of hiring bigoted attacks against her. And after Flores’ district director, whose sister chairs the Hidalgo County Republican Party and is close to both Flores and De La Cruz, was accused of sexual assault, Democrats questioned Flores’ knowledge of the allegations before hiring him.

The Republican and Democratic concern for Texas border districts goes beyond the raw numbers of seats in Congress. Border security and immigration are increasingly major talking points in Washington after two years of Democratic leadership assiduously avoiding the topic to focus on the economy and climate change. Republicans have been accusing Democrats of being asleep at the wheel and are already indicating their desire to impeach Homeland Security Secretary Alejandro Mayorkas.

Latino Republicans from Texas hope to be a realistic voice on Republican border policy within their conference. While candidates like Flores and De La Cruz have been pushing for policies evocative of the Trump administration such as Migrant Protection Protocols (also known as “remain in Mexico”) and the border wall, they have also called for greater resources for legal immigration pathways including an increase in immigration judges.

But to Democrats, Flores and De La Cruz still represented a new generation of extreme, right-wing Republicans. Flores voted in lockstep with the conservative wing of her party during her brief time in office, including against the bipartisan gun safety bill spearheaded by U.S. Sen. John Cornyn, R-Texas, this summer. Both candidates also have hardline positions on abortion access, and Democrats fear that the growing presence of right-wing conservatives of the political school of former President Donald Trump will dilute the ability to get work done across the aisle.

Bobby Pulido, the Tejano music star, echoed that sentiment Tuesday while traveling around the district to campaign with Gonzalez. Self-identifying as a “middle of the road Democrat,” Pulido said Gonzalez was the candidate who best embodied the moderate and socially conservative values of the Valley. Gonzalez was the first congressional candidate Pulido has ever endorsed.