“The fight goes on”: Families of Uvalde shooting victims hoped for change that didn’t come

UVALDE — Veronica and Jerry Mata, whose daughter Tess was one of the 19 students killed in the deadliest school shooting in Texas history, arrived at a bustling local bar and grill for an Election Day watch party Tuesday evening feeling nervously excited.

They were there to support their friend Javier Cazares, a fellow parent of a Robb Elementary shooting victim and a write-in candidate for county commissioner. But their minds were on the governor’s race.

They’d hoped Democratic challenger Beto O’Rourke of El Paso, who supports raising the minimum age to purchase an AR-15-style rifle like the one used to murder their child, would deliver an upset and beat Gov. Greg Abbott. In their view, Abbott has ignored their pleas to change Texas gun laws to prevent another mass shooting.

Several victims’ families joined them at a table in the bar, eating chicken wings, chips and salsa and ordering Michelob Ultras. About an hour after the polls closed, Angel Garza, the stepfather of 10-year-old Amerie Jo Garza — one of the victims — read a news alert from his cellphone: “Breaking News: Texas Gov. Greg Abbott has won a third term, defeating Democratic challenger Beto O’Rourke.”

Veronica Mata didn’t believe it. She said it was too early for the race to be called. But as the night went on and other news outlets projected the same results, the families’ jovial mood turned into disappointment.

“Unfortunately, 21 people dead doesn’t change people’s minds,” said Jazmin Cazares, 17, whose 9-year-old sister, Jacklyn, was killed at Robb Elementary. She had joined her parents to watch the election results — her father lost his write-in bid for commissioner — and was doing her math homework on a tablet.

“Everybody has the right to vote for whoever they want, we just hoped that they would see where we were coming from and see what we wanted to change,” said Veronica Mata, a kindergarten teacher.

Since an 18-year-old gunman killed 19 students and two teachers with an assault-style rifle he bought shortly before the carnage, some of the victims’ families have become politically active, pushing Abbott and other elected officials to raise the minimum age to purchase such weapons from 18 to 21. They pleaded with Texas Republican U.S. Sen. Ted Cruz to support changing gun laws. They have traveled to Austin and Washington, D.C., to meet with other lawmakers to ask for their support and have held demonstrations in their hometown and in front of the state Capitol.

For the Matas, the Cazareses and others, this first major election since the shooting wasn’t like other elections. It was personal. They threw their support behind O’Rourke, who has now lost three elections in four years, hoping that he would be the catalyst to change gun laws in the state. 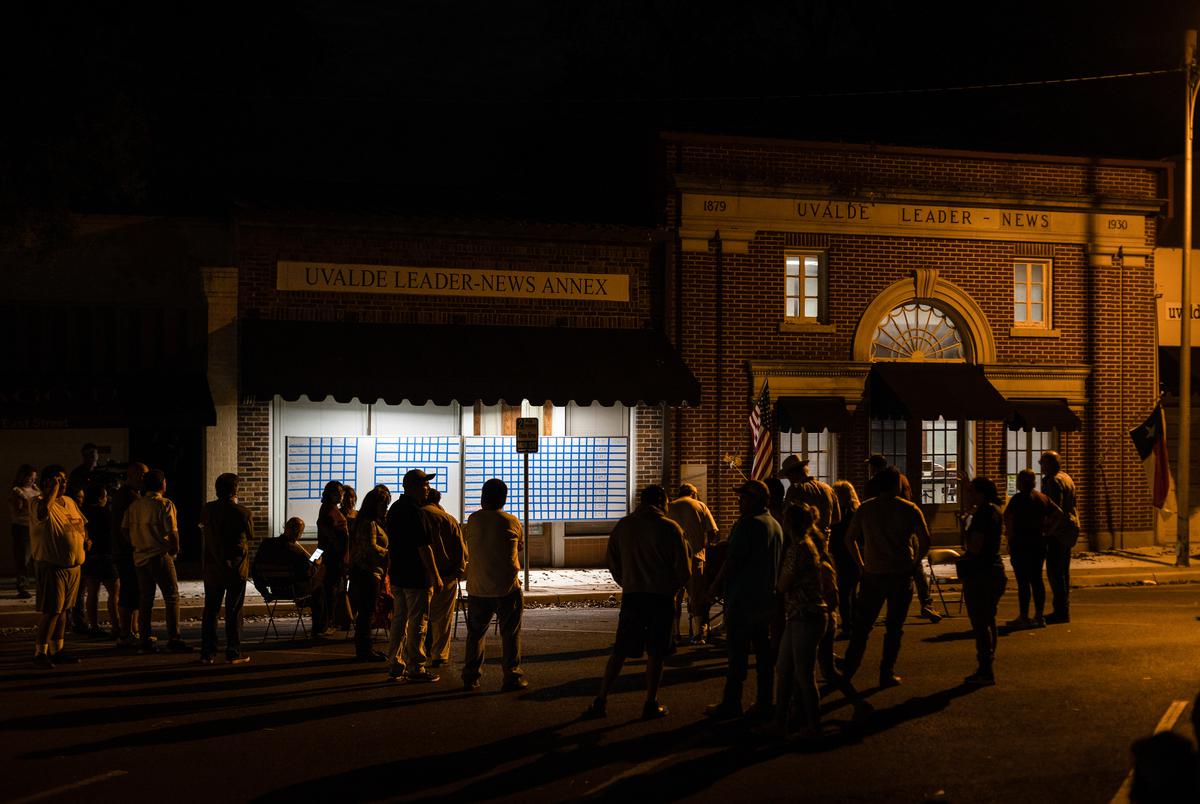 It's unclear whether any of the shooting victims' families supported Abbott's reelection. But the results shocked Berlinda Arreola, Amerie Jo’s grandmother.

She thought that issues like the state power grid crashing for days after a February 2021 winter storm, conservatives’ support of outlawing abortion in Texas and the botched law enforcement response to the Robb Elementary shooting — hundreds of officers waited more than an hour to confront and kill the gunman as students called 911 for help — would tip the election in favor of O’Rourke.

“There’s nothing I can do that’s going to make a difference,” Arreola said. “The only thing that is going to change people’s minds is when it happens to them.”

John Lira, the Democratic candidate challenging U.S. Rep. Tony Gonzales for a congressional seat that sprawls from San Antonio to El Paso, joined the families at the watch party and said that while Abbott’s victory was “crushing,” he was proud of the families for becoming politically engaged after experiencing a tragedy.

“It just means that the fight goes on,” said Lira, who also lost on Tuesday. “This community, these families, they fought their ass off for change, for a new vision, for somebody that will listen to them and be responsive to them and what happened to this community.”

The families ordered more drinks as the night wore on. Many said their fight to force change in Texas isn’t close to being done.

Jerry Mata’s phone rang. It was Faith, the couple’s oldest daughter, and she was crying because she was upset about the election results. Her parents and the other parents consoled her in a video call.

“Babe, we’re going to regroup and continue fighting,” Jerry Mata told his daughter. “Five years from now, the media may leave, everybody may leave, but we’re not going to leave. We’re going to continue the fight and get what we deserve for our kids.” 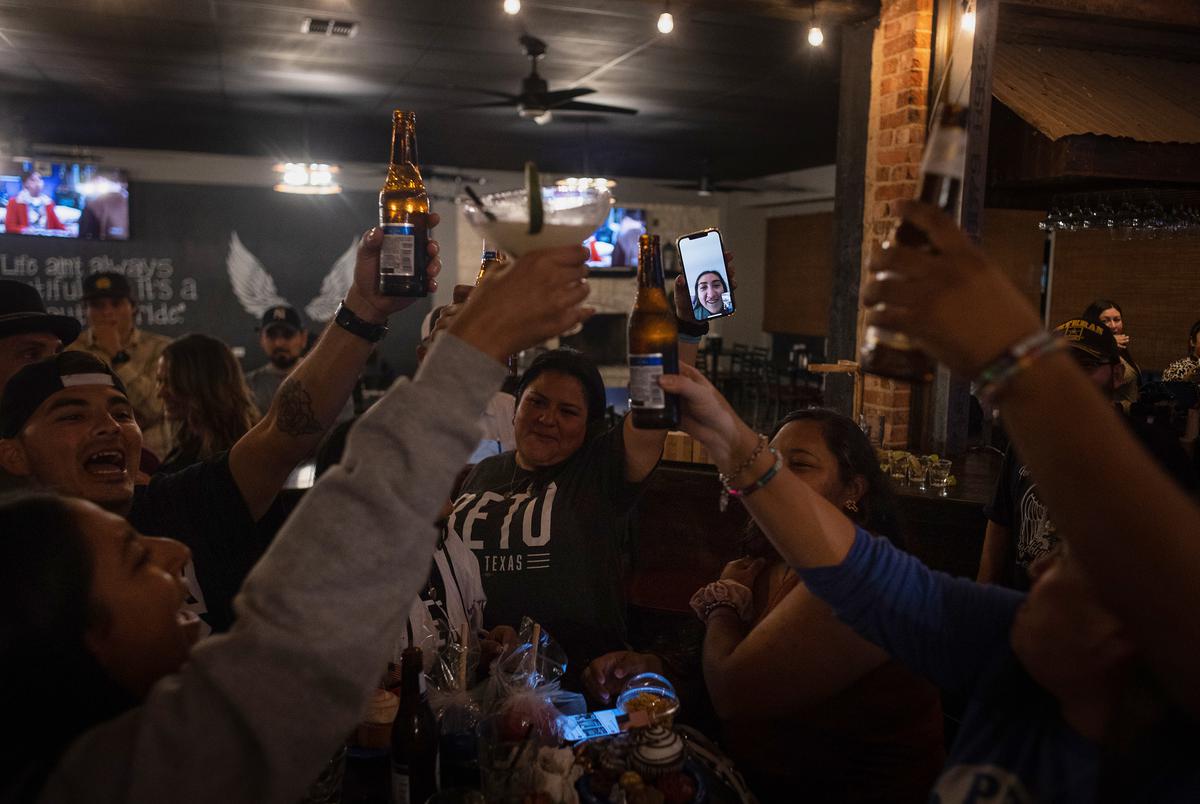 Families of the Robb Elementary shooting victims cheers each other at the election watch party after they each tried to cheer up Faith Mata, who called her parents from her dorm at Texas State in San Marcos, upset after seeing the news that Greg Abbott won reelection. Credit: Evan L'Roy/The Texas Tribune