Khambrel Marshall sits down with newsmakers in our community to discuss the issues having the greatest impact on our region, our state, our country, and our world.

When pollution is at its worst in Port Arthur, brownish-gray smog covers the sky and the smell of chemicals burns the noses and throats of residents. John Beard, an environmental advocate who grew up in the town and used to work in local refineries, is one of many residents who suffer from lung and respiratory issues he blames on the town’s poor air quality.

For the last few years, Beard has been battling the development of two multibillion-dollar liquefied natural gas plants in his predominantly Black and Hispanic coastal town. GoldenPass, funded by ExxonMobil, is already under construction. Port Arthur LNG, a subsidiary of a California energy company called Sempra, is still undergoing permitting and is expected to be built in Port Arthur in the next few years. Both plants will pipe in fracked gas from West Texas’ Permian Basin to process and export to countries across the globe — and they’ll increase the air pollution local residents breathe in daily.

“These companies, no matter what they say, are basically sacrificing communities of color in order to get wealthier, more affluent communities cheap fossil fuels,” Beard said. His organization, Port Arthur Community Action Network, has in recent years become the de facto face of the fight against these plants, representing Port Arthur residents who are tired of being on the receiving end of pollution.

To prevent at least some of that pollution, Beard requested and received a hearing with a state administrative law judge. In his hearing, he argued the Texas Commission on Environmental Quality should set lower pollution limits at Port Arthur LNG. Beard won his case in May, but his victory was ignored by TCEQ during a September meeting. The agency said that increasing pollution controls would be too expensive for Sempra.

Beard’s still ongoing fight, advocates and experts say, is a prime example of how difficult state law makes it for residents to fight new sources of pollution in Texas and how frequently the agency dismisses citizens’ concerns, ultimately discouraging citizens from even attempting to fight the ever-expanding fossil fuel industry in Texas.

TCEQ declined to comment for this story because Beard’s lawyers have filed an appeal and the legal challenge is ongoing.

TCEQ “puts this incredibly high burden on any community member trying to get access to the process,” said Erin Gaines, a lawyer with Earthjustice who has worked with residents in other cases against liquefied natural gas export terminals in Texas. In Brownsville, community members had filed nearly two dozen contested case hearing requests over the last six years against the export terminals that are slated for construction nearby. Only one of those requests for hearings in front of an administrative judge was granted.

“It has a chilling effect,” Gaines said. “If you know that the agency doesn’t grant affected person status for recreation — because they regularly walk or kayak near a place — then people aren’t even going to raise those interests anymore because they know TCEQ won’t grant a hearing.”

Beard first filed for a contested case hearing against Port Arthur LNG last year. Such hearings allow private citizens to make a case against permits issued by TCEQ that might have a direct impact on them.

During the hearing, Beard and his lawyers presented detailed evidence that Port Arthur LNG’s air quality permits, as they had been approved by TCEQ, could increase residents’ health risks — and that the company was using outdated emissions control technology, which they allege violated certain standards set in the federal Clean Air Act.

“Port Arthur LNG’s own modeling showed that the level of nitrogen oxides they were emitting at John’s house was above what TCEQ and EPA call a significant impact level,” said Colin Cox, an attorney with the Environmental Integrity Project who worked on the case. Beard and his community wanted the plant to install better controls and reduce its emissions of two compounds in particular — nitrogen oxides and carbon monoxide, which can increase risks of respiratory issues — by a few parts per million each.

But Port Arthur LNG argued achieving those limits would be financially infeasible at the facility. It also claimed the technologies on the market haven’t been tested in existing facilities. Beard’s lawyers disagreed — but TCEQ staff provided testimony during the case that mirrored Port Arthur LNG’s claims.

The state judge who heard the case ruled in favor of Beard and recommended that Port Arthur LNG’s permits be redrawn to require the new emissions control technologies.

However, in a public meeting in September to decide on the fate of the permit, Jon Neirmann, TCEQ’s executive director, said he disagreed with the judge’s decision and stood by the agency’s previous decision on what counted as the best available control technology. The agency’s commissioners approved the permit as originally written, disregarding the judge’s recommendation.

Federal standards require that companies use what’s known as “best available control technologies” to achieve the “maximum degree of reduction for each pollutant subject to regulation,” while considering energy, environmental and economic impacts.

While it is the Environmental Protection Agency’s job to oversee the standard, it is up to each state to determine, on a case-by-case basis, how to implement and enforce that standard.

TCEQ relies on a survey of technology used at facilities that are already operational — meaning that companies can use older, cheaper, and less effective technologies in their plants.

“It’s a really different process [than what the EPA uses], and it makes no sense to me that TCEQ can say they reached the same end [as the EPA], because they just don’t, in practice,” said Kelly Haragan, the director of the environmental law clinic at the University of Texas at Austin.

Cut out of the process

In other parts of Texas where similar LNG projects are being permitted, residents have been cut out of the public process altogether. Gaines, the lawyer from Earthjustice, represented residents who will have to drive past one plant every day on the only road in and out of their neighborhood; she also represented a group of shrimpers concerned their livelihoods would be affected by the plants’ proximity to crucial waterways.

The commission ruled none of these residents were eligible to challenge the plants’ permits. If they are denied a contested case, residents have fewer options to appeal directly to a state court, since contested case hearings are usually the first step in a bigger legal challenge, Gaines said. 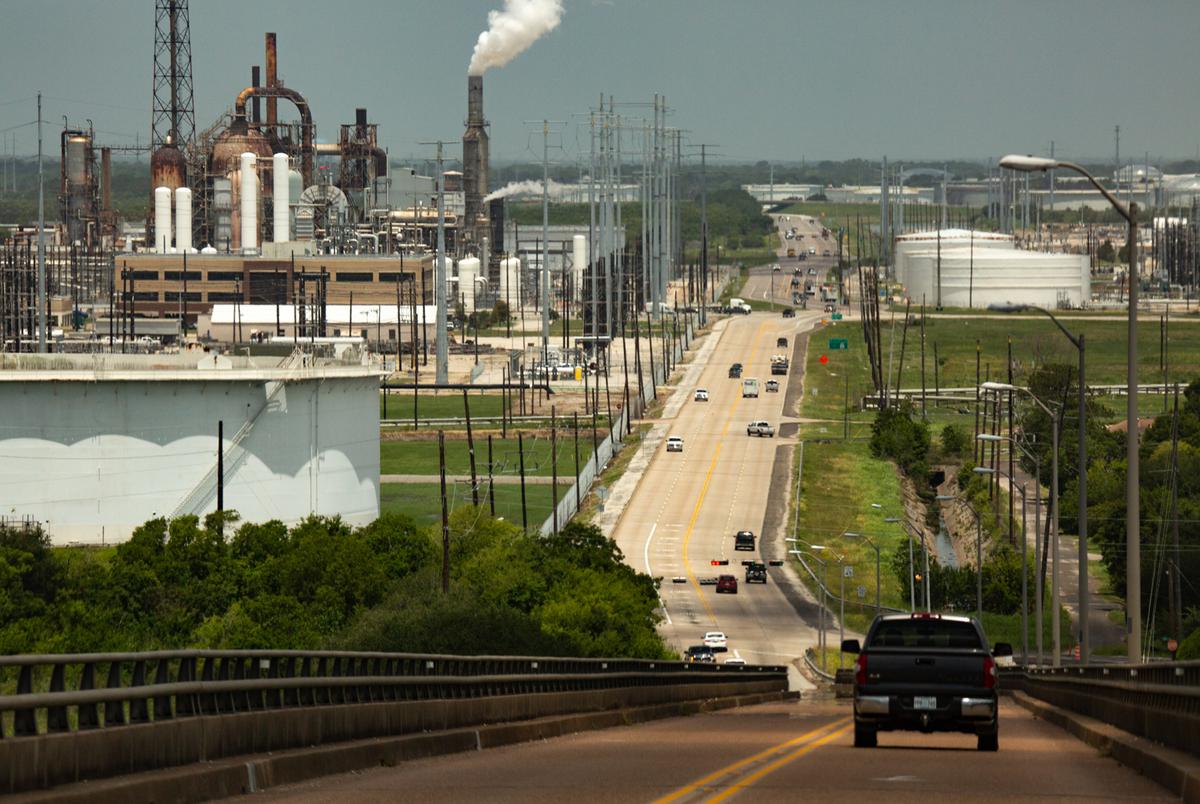 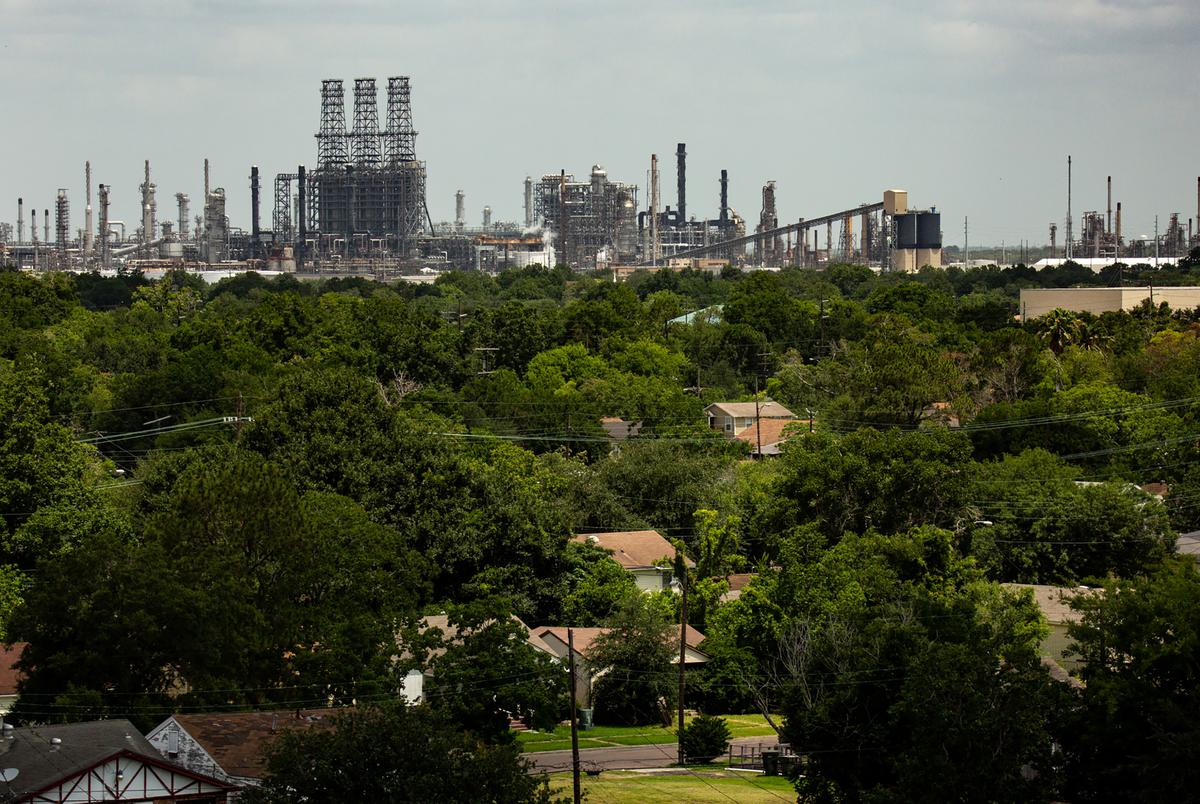 Port Arthur industrial facilities with a nearby neighborhood in the foreground on July 2, 2018. Credit: Pu Ying Huang for The Texas Tribune

Even in Beard’s case, Port Arthur LNG initially attempted to get the case thrown out on grounds that Beard wasn’t an “affected party” and therefore didn’t have legal standing to challenge the permits, claiming that his concerns weren’t “distinguishable from those common to the general public.”

Beard, of course, disagrees. “This area is less than 1,000 feet from places where I recreate and fish, and it’s less than five miles from my home,” Beard said. “For them to say that there’s no effect when they are knowingly increasing the pollution in the air — that flies in the face of all reality.”

When the state judge allowed the case to move forward, granting Beard legal standing, it was over the protests of TCEQ and Port Arthur LNG. At the September public meeting, Niermann said he “would not look to this case as any sort of precedent” for establishing a person’s right to a contested case hearing in the future. In other words, he implied the fact Beard was even granted a hearing was a fluke.

Beard and his lawyers are still exploring avenues to continue litigating the case and reducing Port Arthur LNG’s permitted emissions. In October, they filed an appeal in federal court.

“We are going to continue pursuing justice,” Beard said. “What’s the difference between drinking a gallon of poison or breathing poisonous air one breath at a time?”

Disclosure: Exxon Mobil Corp. and the University of Texas at Austin have been financial supporters of The Texas Tribune, a nonprofit, nonpartisan news organization that is funded in part by donations from members, foundations and corporate sponsors. Financial supporters play no role in the Tribune’s journalism. Find a complete list of them here.