🔒Welcome to KPRC 2: These are anchors, reporters who joined Houston’s home for news in 2022

Odessa city officials are still investigating what caused a massive water line break that left the city without water for 48 hours last month. But they’ve shared one important detail: The water line was about 60 years old.

“Aging water systems are common throughout the country,” said Thomas Kerr, Odessa’s utilities director, during a press conference the day after the line broke. “It’s often difficult for municipalities to be able to afford to manage those systems as they age. That’s the situation we find ourselves in.”

The water outage in Odessa exposed the city to a reality that happens all over Texas and the nation — water supply systems have become increasingly more vulnerable to disasters.

In February, many Laredo residents had their water cut off due to a break in the 50-year-old pipes. In May, Bell County residents were asked to use 50% less water after a water leak. Last month, a water line break caused areas of College Station to flood, and officials said it was due to the dry conditions.

Last year, the American Society of Civil Engineers issued a report that gave a grade of C- to Texas’ drinking water infrastructure, describing it as “mediocre [and] requires attention.”

The report notes it's important for Texas to keep up with drinking water demand as its population continues to grow. According to the report, Texas’ population is projected to grow by more than 1,000 people per day during the next five decades — from 29.7 million in 2020 to approximately 51.5 million by 2070.

The report also states that many wastewater systems aren’t resilient enough to withstand extreme events. According to the report, the number of sanitary sewer overflows more than doubled from 2,500 to nearly 6,000 between 2016 and 2019, and they’re a threat to Texas’ lakes, rivers and beaches.

Ken Rainwater, a professor of civil, environmental and construction engineering at Texas Tech University, said a lot of factors can cause critical infrastructure to fail, and in the case of water pipes, it could be anything from how old they are to what material they’re made from. Other factors are the conditions surrounding the pipes, including the area’s climate and whether they’re buried near high-traffic areas. 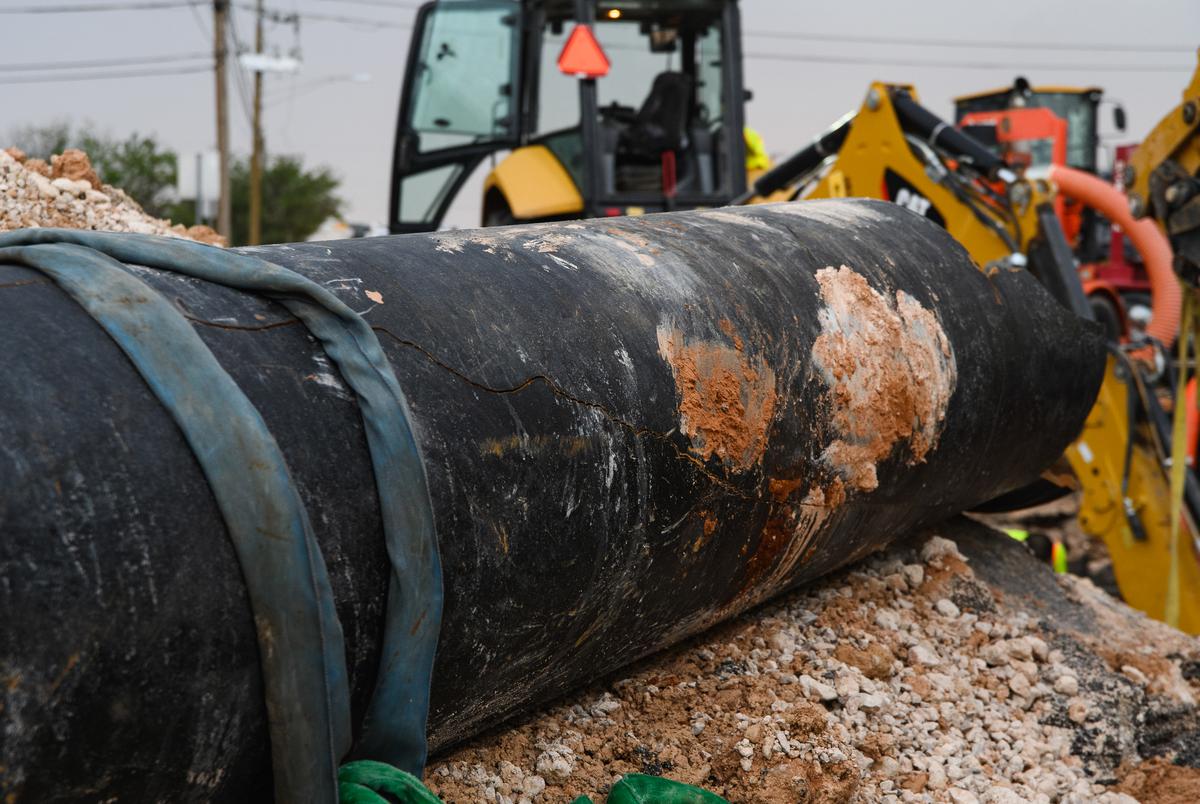 In an interview with the Odessa American, Kerr said 40% of the city’s pipes are made of cast iron and another 20% are made from iron-based materials. According to Rainwater, cast iron was widely available and used after World War II when a lot of cities were growing their infrastructure. Now, because of the way the material degrades as it ages, Rainwater said it’s not used when pipes are upgraded or repaired.

While it’s likely that Odessa has replaced some of its old pipes in the past, Rainwater said it’s to be expected that cities with older infrastructure will be surprised now and then with breaks and failures.

“We’ve learned that cast iron pipes have lives of about 50 years, so [Odessa] got past 60 years,” he said. “But it’s like you deciding, ‘How long am I going to wait to change the tires on my car?’”

Water boil notices are a good indicator of how troublesome a city’s water infrastructure is becoming. Rainwater said when a water system is shut down, it also takes time to start disinfecting and cleaning water again before it’s safe to use, which is typically why water boil notices are issued.

According to data from the Texas Commission on Environmental Quality, 2021 was the worst year for water boil notices in the last decade, with 3,866 reported. The high number of reports could be linked to the winter storm last year, when more than 14.6 million Texans’ water supply was disrupted by frozen or burst pipes. During that time, 1,655 water boil notices were issued.

On average in the last 10 years, East Texas has experienced more water boil notices than any other area per year. TCEQ said only 12 of Texas’ 254 counties had no listed notices in the last decade. The agency did not have additional information about why that is, noting that the information available is self-reported by each city’s public water officials.

Keeping the water healthy is an important function of a city’s infrastructure, and it’s a challenge in places like Idalou, a town of about 1,815 residents about 150 miles north of Odessa.

“Our main priority is funding for a water treatment plant,” said Idalou city administrator Suzette Williams. “Our best-producing well has a contaminant that exceeds the maximum level, and we’ve tried fixing it in the past but we couldn’t keep up with the level.”

The contamination issue has been ongoing for about five years, but Williams said it’s been difficult to find the funds to get the town’s treatment plant. According to Williams, it’s been 12 years since the city issued a bond to citizens, and even then, that was for water and sewer improvements.

“The funding opportunities are not as easily accessible as maybe other larger cities that can issue larger amounts of debt to do a large project,” said Williams. “It’s a 20-year note, so we look at the climate of the economy, too, because whenever we add debt to our portfolio, that debt is passed on to the citizens, and that’s when we’re looking at utility rate increases to cover that bond payment.”

In March, Williams presented seven requests to the Lubbock County Commissioner’s Court as part of funding applications through the American Rescue Plan Act, which is expected to dole out about $5.7 billion for COVID-19 recovery to Texas. Williams’ requests were mostly related to water system improvements.

“Regardless of if we get funded through the county’s ARPA funds, this project has to go on,” Williams said. “If we have to look at issuing debt, that will be our next step.”

Residents “want to raise their families here, they want to have safe drinking water,” she added. “And they understand that there’s going to be some costs associated with it.”

Raising money for these projects is a hurdle for small communities, but rate increases are a feasible option. According to the Texas Water Journal, raising rates is the only low-cost means cities and utility boards have to secure the funds for needed upgrades in a short period of time.

Financing upgrades and repairs has become all the more difficult because of supply shortages and price increases in raw materials as a result of the COVID-19 pandemic. Perry L. Fowler, executive director of the Texas Water Infrastructure Network, said contractors who specialize in water systems are having a harder time giving their clients a precise estimate for repair work because of those uncertainties.

“Getting pricing guaranteed on certain items is difficult until you’re submitting a purchase order that day. So there’s a lot of risk that’s out there. It really requires a lot more planning and communication in some cases, and more funding,” Fowler said. 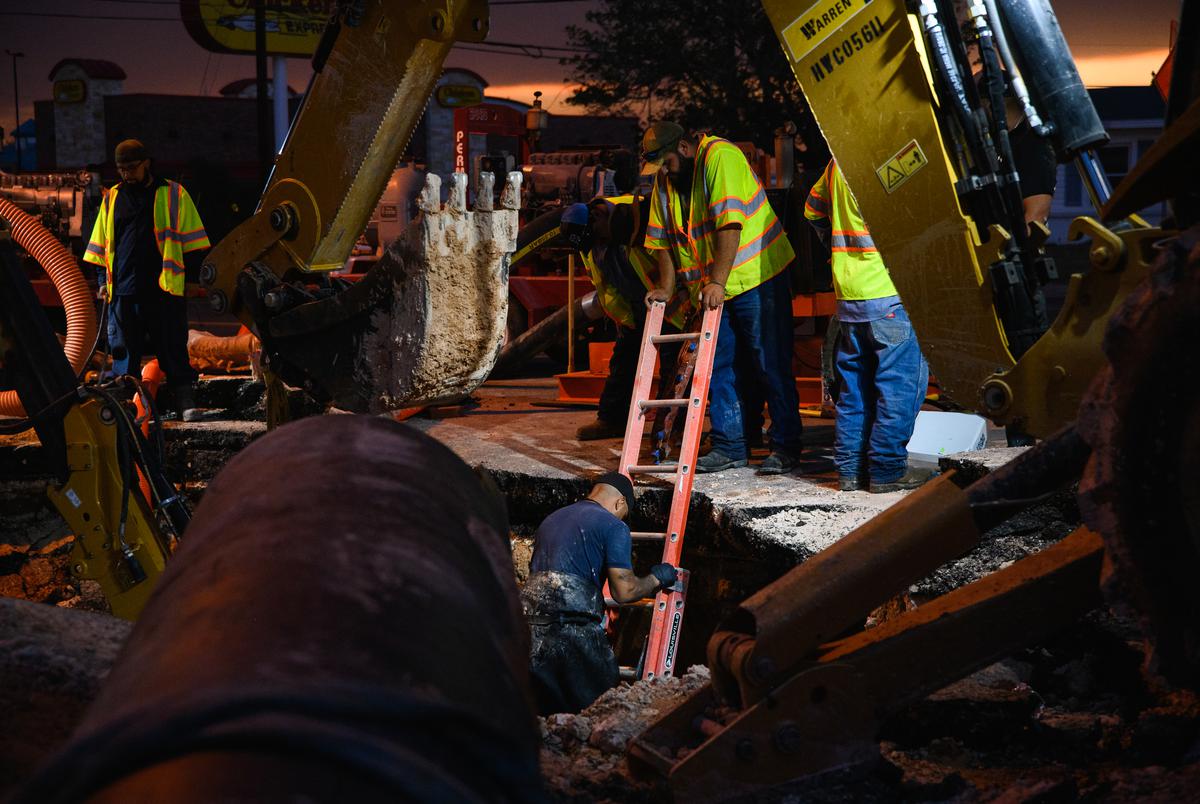 President Joe Biden’s Infrastructure Investment and Jobs Act, which passed in November, promises to bring some much-needed financial relief to Texas. According to the Texas Water Development Board, it has not received funds yet but is expecting to receive nearly $508 million this fiscal year.

Although the federal funds that will flow into the state are much-needed aid, some experts say it’s not enough.

“People talk about it like it’s going to be this infrastructure renaissance, and frankly, I just disagree with that,” Fowler said. “Anybody who’s really familiar with it knows that that’s not necessarily the case. It’s more money, certainly. It might go to some communities that really need it, but it is not the silver bullet for our water infrastructure needs by any means.”

Another issue facing Texas’ water infrastructure is the ongoing drought. Texas is experiencing the worst drought in the last decade. About 80% of Texas has been facing drought conditions most of the year, according to the U.S. Drought Monitor.

“​​When it gets dry, the soil expands and contracts, and when it does that, it impacts everything underground,” Fowler said. “So if pipes are in conditions where the soil is expanding and contracting, especially if they’re old and brittle, they’re more likely to have potential failures. Which is why typically we do see more pipes breaking in the summertime in Texas.”

Last year’s winter storm also caused pipes to freeze and burst all throughout the state.

“Any severe weather conditions are gonna potentially impact infrastructure, especially if the ground is shifting and things are moving around where you have facilities for water, wastewater systems. ... It exposes your vulnerabilities,” Fowler said.

In colder states, water infrastructure is typically placed further underground to prevent freezing — something that Texas might need to consider in the future. In the meantime, Fowler said, infrastructure upgrades need to happen sooner rather than later.

“These projects can’t wait, that’s the problem,” he said. “If you delay investments, or you have a project that’s ready to go on the shelf, it’s going to cost more money if you go further down the road.”

Disclosure: Texas Tech University has been a financial supporter of The Texas Tribune, a nonprofit, nonpartisan news organization that is funded in part by donations from members, foundations and corporate sponsors. Financial supporters play no role in the Tribune's journalism. Find a complete list of them here.

Join us at The Texas Tribune Festival, happening Sept. 22-24 in downtown Austin, and hear from 300+ speakers shaping the future of Texas including Joe Straus, Jen Psaki, Joaquin Castro, Mayra Flores and many others. See all speakers announced to date and buy tickets.

Correction, July 8, 2022: An earlier version of this story incorrectly stated that an American Society of Civil Engineers report gave a grade of C- to the quality of Texas’ drinking water. The grade was for the state’s drinking water infrastructure.