🔒Houston Toy Museum: These are 9 toys you can get all the feels from your childhood during a visit to this new Houston attraction

Ask 2: Why are the barriers still up on 90 in Rosenberg?

Gun ownership is ingrained in Uvalde’s culture. Some here are rethinking how it should be regulated.

UVALDE — For most of his life, Ricky Freitag has been a hunter. From shooting his first hog when he was 10 years old to now teaching his own 10-year-old how to handle a firearm, it’s a tradition etched into his family.

His father and grandfather, who was a state game warden, introduced him to the sport. His father-in-law is an avid hunter, and Freitag often tags along with him. Freitag’s grandparents lived on a ranch, which made it easy to go hunting and learn how to use a gun.

In this South Texas town, many young boys grow up dreaming of that perfect shot.

“That’s always been the culture here,” Freitag, 31, said. “When I shot my first animal, it was just a surreal experience.”

Longtime Uvalde residents say the city is a hunting mecca and the love for guns goes right along with it. For the last 40 years, the town has held its annual Hunters Roundup event, which brings thousands of hunters together to talk game, eat food and raffle guns.

Uvalde — a mostly Latino city of about 15,000 residents between San Antonio and the border with Mexico — is an attractive location for hunters. Ranches, lush with wildlife like white-tailed deer, surround the city. Celebrities like singer-songwriter Ted Nugent hunt around town. Freitag himself hunts on a ranch about 8 miles out.

But after a shooter used an AR-style rifle to kill 21 people at Uvalde’s Robb Elementary School last week in what has become the state’s deadliest school shooting, some residents are rethinking what gun ownership means. Many here still believe firmly in their right to bear arms, but they are now saying they would be supportive of raising the age limit to attain weapons like the AR-15 or banning the weapon altogether. Others question whether these measures would be effective in preventing similar tragedies — but said they would still support them.

Proposals after the shooting

It remains to be seen how lawmakers will act in the wake of last week’s tragedy, but for now, Republican state leaders are signaling they will reject stricter gun control measures once again and instead try to steer the conversation toward offering mental health resources and arming teachers.

Texas Democrats, on the other hand, have already called for a special session to pass sweeping gun reform, which would include raising the minimum age to purchase a gun from 18 to 21; requiring universal background checks for all firearm sales; implementing “red flag” laws to allow the temporary removal of firearms from those who pose imminent danger; requiring a waiting period after purchasing a gun; and regulating civilian ownership of high-capacity magazines.

Gov. Greg Abbott has said none of the laws passed in the last session, which greatly expanded gun access, allowed the shooter to attain his guns. Abbott has said looking at the mental health resources that the state offers and increasing them is a priority.

Beto O’Rourke, who is running against Abbott in November, is a big proponent of passing the type of legislation that the state’s Democrats have laid out.

In Uvalde, where guns are often used for home protection or hunting, opinions differ on what new gun laws would look like in the aftermath of the shooting. 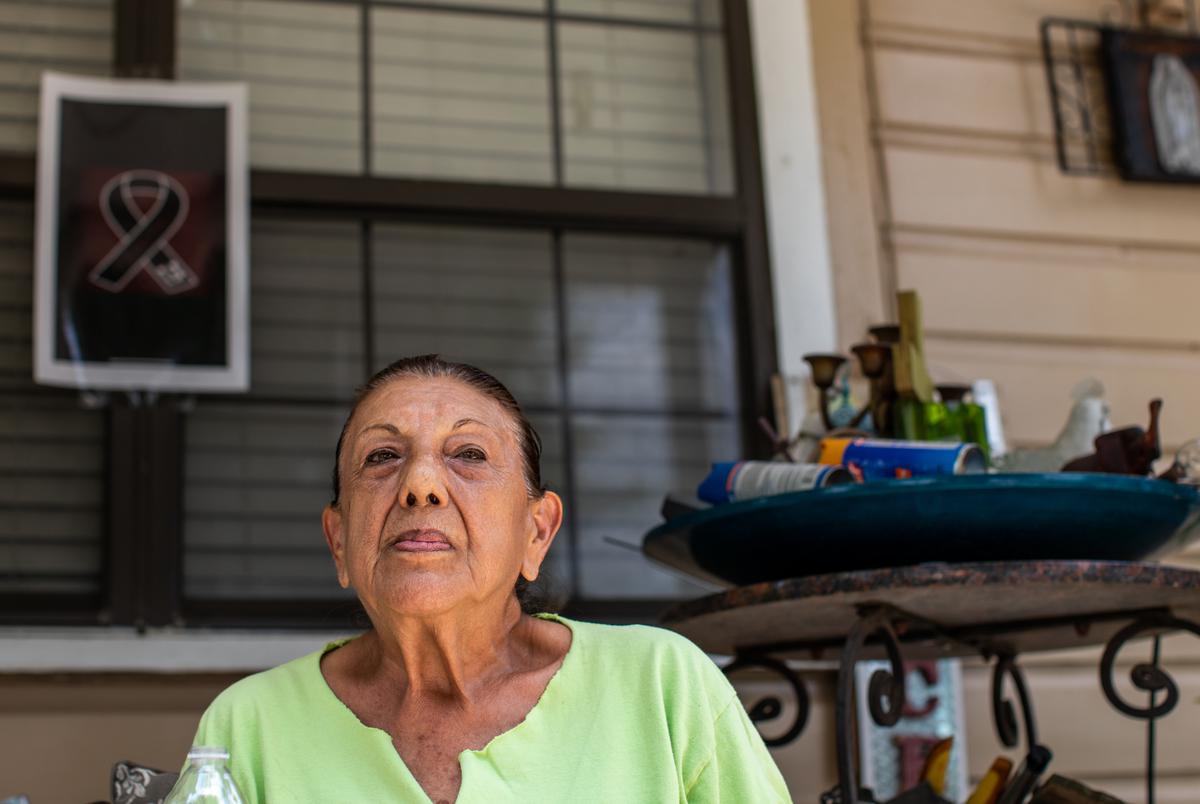 Dolores Contreras, 75, lives next door to her childhood home and a few houses down from Robb Elementary School, where she, her nine siblings, children and grandchildren all attended classes in Uvalde. Credit: Kaylee Greenlee Beal for The Texas Tribune

Dolores Contreras, 75, who lives a few houses down from Robb Elementary, doesn’t own any guns herself but said she understands the culture and the need to own them in a town like this one. Her nephews hunt and have taken part in that sport since they were little.

Before the shooting, most of her safety concerns had little to do with gun violence and more with drug and human smuggling, she said. The town is located roughly 75 miles from the U.S.-Mexico border and has recently seen an increase in police chases involving smugglers, local authorities have said.

But even then, there is no need for military-style assault rifles to be sold in Uvalde, she said.

“There’s no war here,” Contreras said. “Why even sell those guns? I don’t think that was right for [the gun store] to be selling those big, big guns.”

Appetite for a middle ground

Hunting and gun ownership holds a sentimental value in the Freitag family. Some of Freitag’s guns were passed down to him from his grandfather, he said.

From an early age Freitag was taught that guns aren’t a toy — they’re something you have to respect.

Freitag has obtained all the correct licenses and taken shooting classes. He has always followed all gun safety and etiquette rules, like keeping his barrel down, never pointing a weapon at people and even picking up the shells after shooting. Freitag hopes to instill that respect and knowledge to his son.

“Me growing up and actually having the opportunity to [hunt] — that’s something that I can maybe pass on to my kids,” he said.

Freitag owns about 50 guns, ranging from hunting rifles to AR-15s, the same military-style weapon the gunman used in last week’s shooting. He said it’s easier to hunt wild pigs with that weapon. 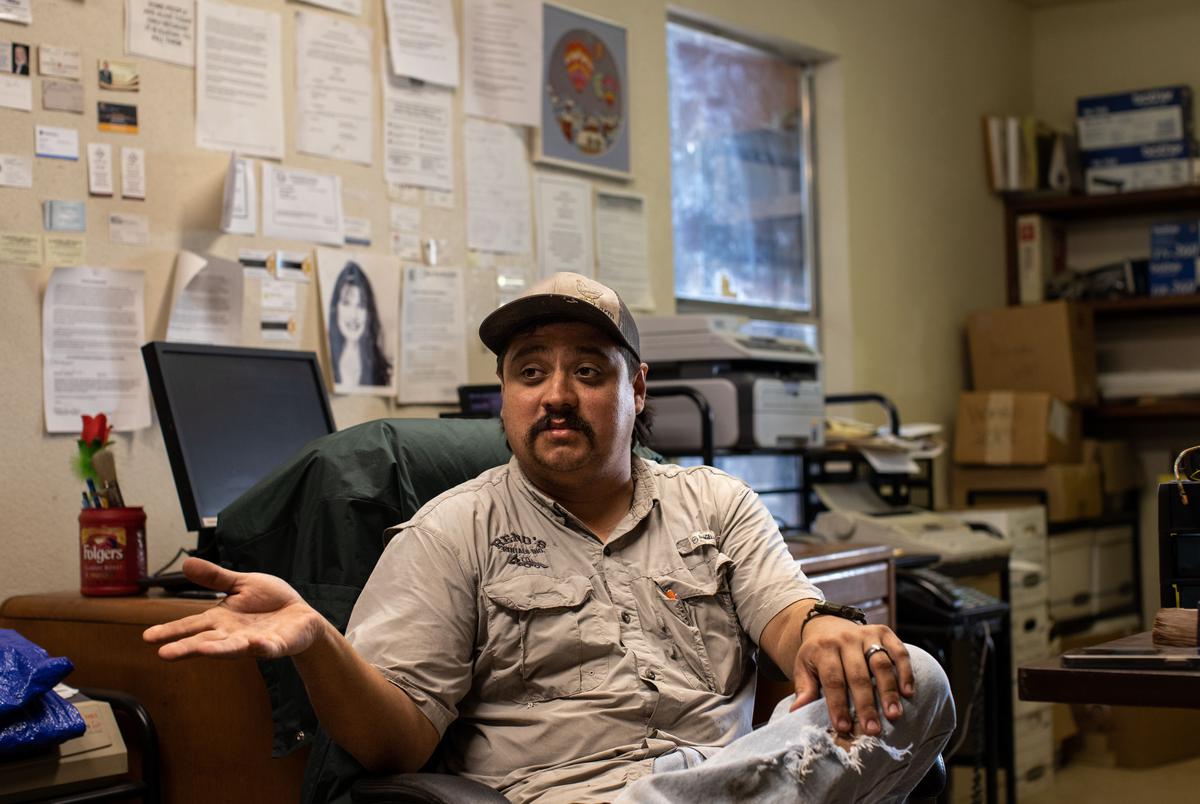 Ricky Freitag sits in his father-in-law’s office in Uvalde. He said of hunting for sport in the area: “That’s always been the culture here.” Credit: Kaylee Greenlee Beal for The Texas Tribune

While he understands why some people are calling to ban AR-15s, he and others would rather support legislation that raises the age when a person can buy one to 21.

“It’s fun and that’s what we use it for,” he said. “I know there’s the argument ‘Why do people need that gun?’ Nobody needs anything. That’s just our right to buy and do what we choose to do with them.”

Other than using guns for sport, Freitag usually carries a handgun as he goes about his day. His job in Uvalde is to tow cars and he says he needs the protection. Sometimes people get angry when he takes someone’s vehicle. Sometimes he’s working outside the city limits at 3 a.m. and he doesn’t know who or what he’ll come across when it’s pitch dark. While he’s out at those times, his wife also keeps a gun handy.

Alex Covarrubias, a resident of Uvalde for more than 25 years, also has his own gun at home for protection. But before last week’s shooting, he never had really thought about the kinds of weapons that are available to people once they turn 18. Now he’s also calling for a change in the age limit to buy high-powered rifles that can cause so much harm in a matter of seconds.

Authorities say the gunman in last week’s shooting picked up a rifle at a nearby gun store shortly after his 18th birthday. That should’ve been a warning sign, Covarrubias said.

“Taking out a rifle on the first buy — it should have been a red flag right there,” he said. “It’s too big of a gun for here.”

Authorities also say the shooter bought 375 rounds of 5.56-caliber ammunition about a week before the shooting, which should’ve been another warning, Covarrubias said.

On the day of the shooting, it was found that the gunman had brought over 1,600 rounds of ammunition with him.

Freitag said the last time he bought ammunition was a couple years ago; he only buys about 100 rounds whenever he needs a refill, he said. He agreed that the amount of ammo the shooter bought was unusual and should’ve been a red flag.

A longtime Uvalde resident, who asked The Texas Tribune not to use her name because she wants to teach in the local district and worried that her comments could risk her job search, said she doesn’t own a gun but has always lived in households that have them. She once dated someone who didn’t own a gun; she never felt quite safe when she was with him, she said.

But even though she is a strong believer in the right to bear arms, she said she doesn’t understand why guns can’t be further regulated. Instead, discussion about guns is black or white without any room for nuance. 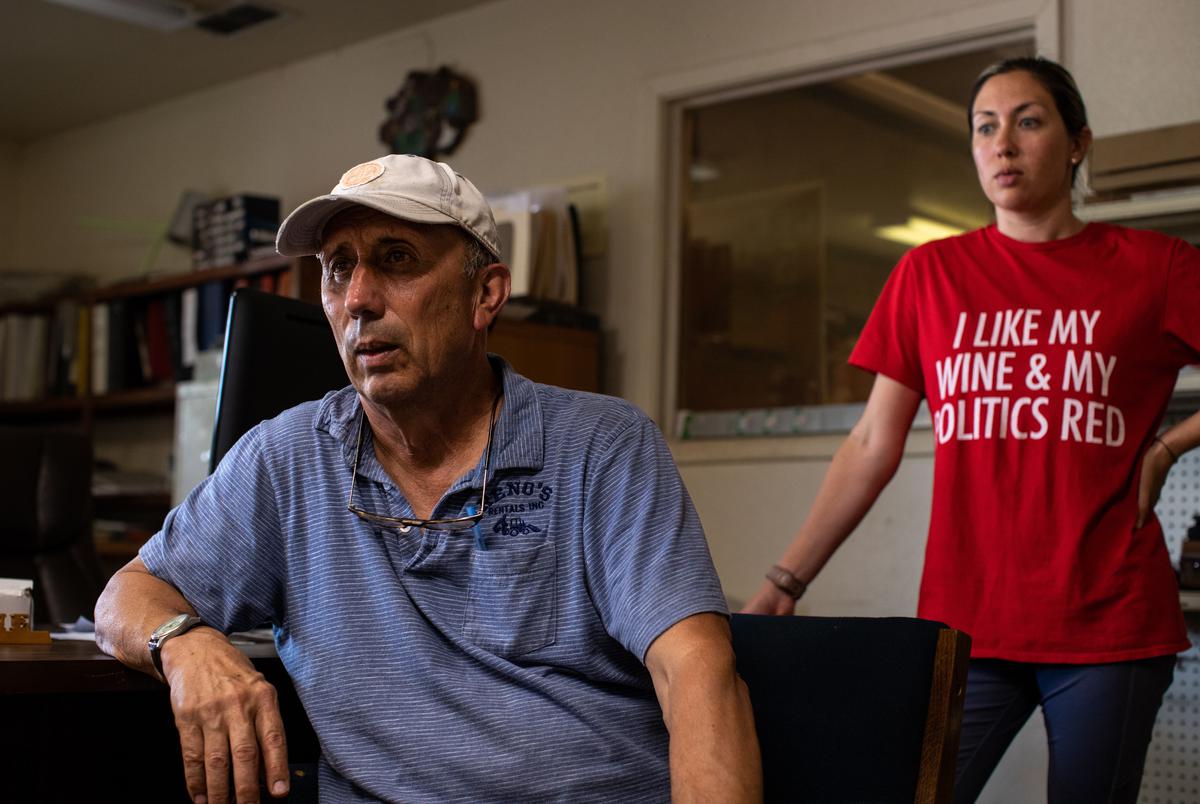 Rene Nolasco sits in his office at Reno’s Rentals in Uvalde on May 30, 2022. His daughter, Lauren Freitag, 31, stands behind him. Nolasco said explained the appeal of owning an assault rifle by equating it to owning a sports car: People don’t need sports cars to get around, but they like the way it feels to drive them. Credit: Kaylee Greenlee Beal for The Texas Tribune

“We sell drugs, we sell alcohol, we sell cigarettes and everybody has the right to them,” she said. “But they do harm people, they do cause death, so we have regulations. And the same should be for guns.”

Freitag’s father-in-law, Rene Nolasco, 68, said he doesn’t think banning military-style assault rifles is the answer. He has one of his own, which he uses to shoot targets in an isolated range. He would be OK with raising the age limit to buy an assault rifle but doesn’t believe it will stop anything. Nor will banning AR-15 style guns.

Despite laws and policies, bad people will find ways to do harm, said Nolasco, whose brother is the county sheriff.

Nolasco also equated owning an assault rifle to owning a sports car: People don’t need sports cars to get around, but they like the way it feels to drive them.

“It’s just fun,” Nolasco said about shooting an assault rifle. “I know what kind of power my AR-15 has and I know how to use it.”

Freitag believes part of the solution should be mandatory gun safety education, just like he received when he was growing up.

But while he agrees that some changes might be needed, he hopes they don’t hamper gun enthusiasts’ rights to bear weapons.

“I’d hate for it to jeopardize avid gun carriers like us who abide by the laws and mean no harm to anyone,” Freitag said.