Gov. Greg Abbott wants to build a border wall. South Texas landowners are divided over whether they want it.

What sold Gerardo Vargas on buying a ranch in Zapata County along the Rio Grande was the view from two 45-foot-tall cliffs that stood on 250-acre property, offering a view of both the river and the distant mountains around Monterrey more than 100 miles away.

From those cliffs, Vargas said he could hear fish splashing in the river and sometimes, someone on the Mexico side would be fishing and offer a friendly wave. Because the cliffs faced west, Vargas said, they offered a view of a “perfect sunset.”

But near the end of Donald Trump’s presidency, The U.S. Army Corps of Engineers began to pave a road as part of border wall construction on Vargas’ ranch and bulldozed one of the cliffs. The construction also uprooted many of the old, tall mesquite trees on his property.

When President Joe Biden took office, construction on Vargas’ land stopped before any part of the wall was erected and he was relieved that he still had one cliff left. Earlier this month, however, Gov. Greg Abbott announced that Texas intends to build its own border wall to stem what he called a “tidal wave of illegal immigrants coming across the border, wreaking havoc in communities and residents who live here in Texas.”

Abbott issued a disaster declaration on May 31 at a press conference in Fort Worth, then announced that the state will set aside $250 million in state funds to help build the wall; federal lawmakers have said building parts of the Texas border wall would cost at least $26.5 million per mile.

“President Biden’s reckless open border politics have led to a crisis along our southern border,” said Renae Eze, a spokeswoman for Abbott, adding that the governor’s action was justified because of a 20-year record high of migrants crossing the border.

But the plan has reignited opposition from many South Texas landowners like Vargas who don’t want a wall cutting through their properties. Now, the fight is with their state authorities rather than the federal government, and like every wall, there are two sides to the argument.

In Zapata County and other border counties — areas that were once reliably Democratic strongholds — former President Donald Trump made significant gains in last year’s election, and the border wall has become a focal point of local tension between those who support wall construction and others who don’t see the need for it.

“We’ve been fighting the federal government, we’re not just going to roll over and give up now,” said Elsa Hull, who owns a 3-acre ranch in San Ygnacio, a Zapata County town of fewer than 700 residents. “But what kind of governor is that, you know? To take people’s homes and businesses and farms and ranches away from them. That is not a governor for the people by any means.”

Hull is one of six plaintiffs in a 2019 lawsuit against construction of Trump’s proposed U.S.-Mexico border wall. The suit has been put on hold since the Biden Administration took office and froze border wall construction funding; it was one of several lawsuits by South Texas landowners challenging Trump’s wall.

Hull has lived on her ranch next to the Rio Grande with her two daughters for a couple of decades now and doesn’t agree that the Texas side of the river is unsafe. As someone who monitors the river’s water quality for a living, she works along a 300-mile stretch of the Rio Grande from Del Rio to Zapata County and is often alone in remote areas.

“I have never once been in fear of my safety or the safety of my children,” Hull said. “People here do not bother us. They are not running rampant through the areas like in [the TV series] Breaking Bad. Nothing, nothing in 20 years.” 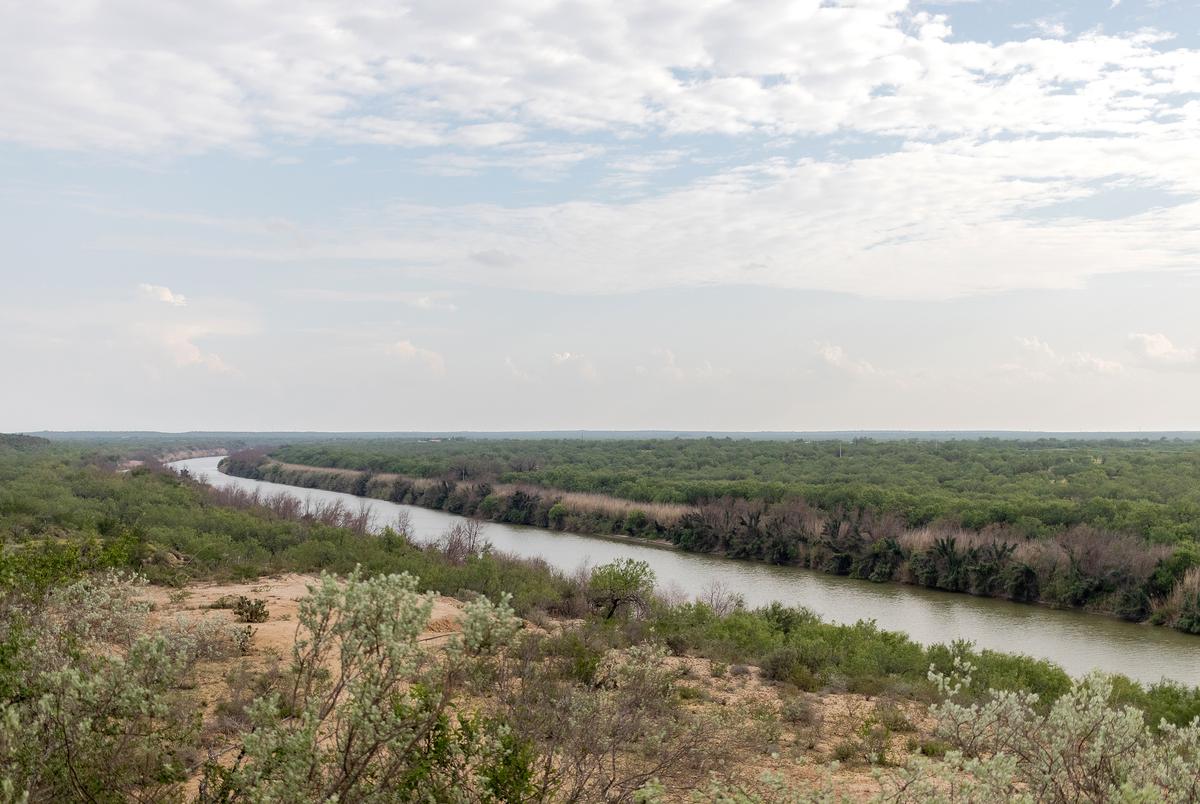 The view of the Rio Grande from Gerardo Vargas' property on Zapata County. Credit: Jessica Rodriguez for The Texas Tribune

Wall plan has support among some landowners

Other landowners, however, said they find comfort and relief in Abbott’s plan.

Allison Anderson moved to a 20-acre ranch in Del Rio about a year ago, hoping to find a safe place to raise her young daughters, ages 5, 3 and 1, but Anderson said, “within the last eight months or so, it has just gotten so bad here — since the [presidential] administrations changed.”

Anderson, 38, said she was outside with her daughters one April afternoon to feed their livestock when she saw a fleet of state trooper vehicles dash through her property. She said she scooped up her girls and ran to the house for cover while a helicopter circled above their home as her daughters peeked through the window. She later learned from her husband, who is a Border Patrol agent, that four immigrants had been hiding somewhere on their property; only one was apprehended that afternoon, she said.

It wasn’t the first time migrants have crossed their property, Anderson said.

“I’ve had several very close encounters where men were either acting aggressively toward me or actually rush at me out of the brush,” Anderson said. “It got to the point where I was not sleeping anymore and it was affecting me dramatically on a mental level, where I was terrified to leave the house to do anything because I was worried about my kids’ safety.”

Lanny Mecum, who is 77 and owns more than 10,000 acres of land along the river in Zapata, said she’s grateful Abbott has grabbed the baton to build a border wall.

Mecum’s ranch was passed down to her from her grandfather, and said she supports a border wall because she sees “all the fine Border Patrol river riders, government people that work down in that area are just overwhelmed trying to save lives.”

Abbott noted that in the first four months of this year, the Texas Department of Public Safety seized 137 grams of fentanyl, a highly addictive drug, compared to 52 grams in all of 2002. Apprehensions of migrants at the state’s southwest border are already nearly double that of last year’s record.

Mecum said she was “OK with losing a few acres to get [a border wall] completed … I’m older and I would be glad if before I leave here, I would love to see that project taken care of to help South Texas.”

Shifting political tides on the border

For example, Trump finished 23 points higher in Hidalgo County last year versus 2016, while neighboring Starr County gave Trump 55% more of its votes. Joe Biden still won both counties. But Trump flipped Zapata County in 2020, winning with 52% of the vote; in 2016, Hillary Clinton won the county by 33 percentage points. 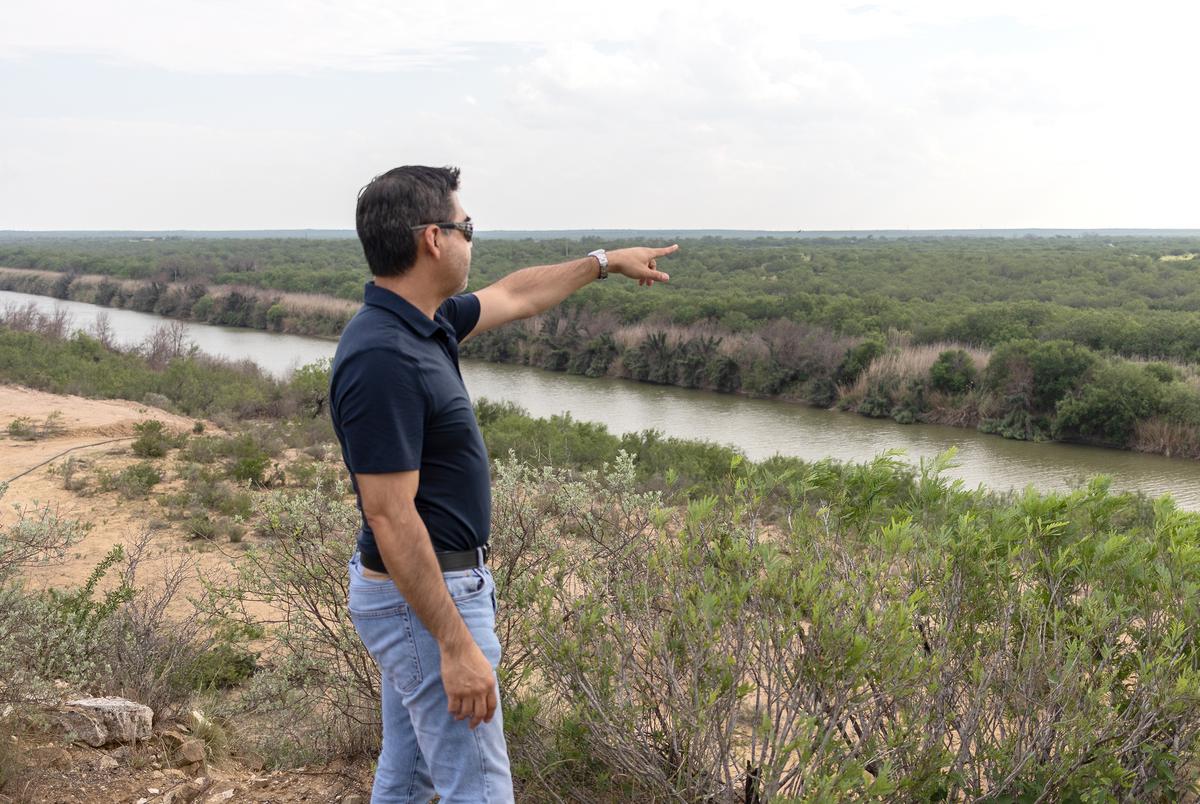 Gerardo Vargas points toward the Mexican side of the Rio Grande, where he often sees people fishing. Credit: Jessica Rodriguez for The Texas Tribune

Adrienne Pena-Garza, the Republican Party chair in Hidalgo County, applauds Abbott’s initiative to carry on wall construction, calling it a step toward “restoring law and order.”

Pena-Garza said more border security provides more safety not only for border residents and Border Patrol agents, but “for the families that are coming across. We need to be encouraging legal migration. I think that it’s wonderful that people want to come to America, but we need to do it safely and legally.”

Immigration advocates such as Laredo attorney Carlos Flores, however, say the path to citizenship is too complicated and cumbersome for those seeking refuge from countries struggling with civil war or ongoing drug cartel violence.

Flores said it can take years for an immigrant to receive a green card, or permanent residency, and that “there is just no time when you are put in these kinds of dangerous situations these people are facing.”

Abbott hasn’t released detailed plans or a timetable for the proposed border wall yet, but any wall construction that isn’t on government-owned land will require seizing private land through eminent domain, which is the power of governments to seize private property without the owner’s consent.

“It would be the greatest land grab in modern American history,” said Flores, who sued Trump and the acting heads of the U.S Department of Homeland Security and the U.S. Customs and Border Patrol last year, claiming that Trump’s motive to build the border wall was grounded in racism and politics, making it an unconstitutional use of eminent domain.

Flores filed suit on behalf of Melissa Cigarroa, who owns a 175-acre ranch in Zapata County and Christopher Rincon, the executive director of the San Ygnacio-based River Pierce Foundation, an organization that strives to preserve the colonial character of the town.

The lawsuit was put on hold after Trump’s loss last year, and Flores said he’s waiting for more details from Abbott before deciding whether to file a new lawsuit over the proposed Texas wall.

“We’re an area that is very proud of our culture, and our culture is largely tied to being part of the Mexican-American identity and the river and the border,” Flores said. “And so what Greg Abbott has done is he has betrayed the people of South Texas with this announcement. It is no question a slap in the face to our communities.”

Trump’s wall would have taken some of the land near three of the Pierce Foundation’s buildings along the river: the Ricke’s house, the Uribe Chico House, and the Trevino-Uribe Rancho — which was built in 1830, making it the oldest surviving building form the period of Spanish settlement on the north bank of the Rio Grande. The buildings contributed to San Ygnacio’s designation as a National Registered District in 1973. 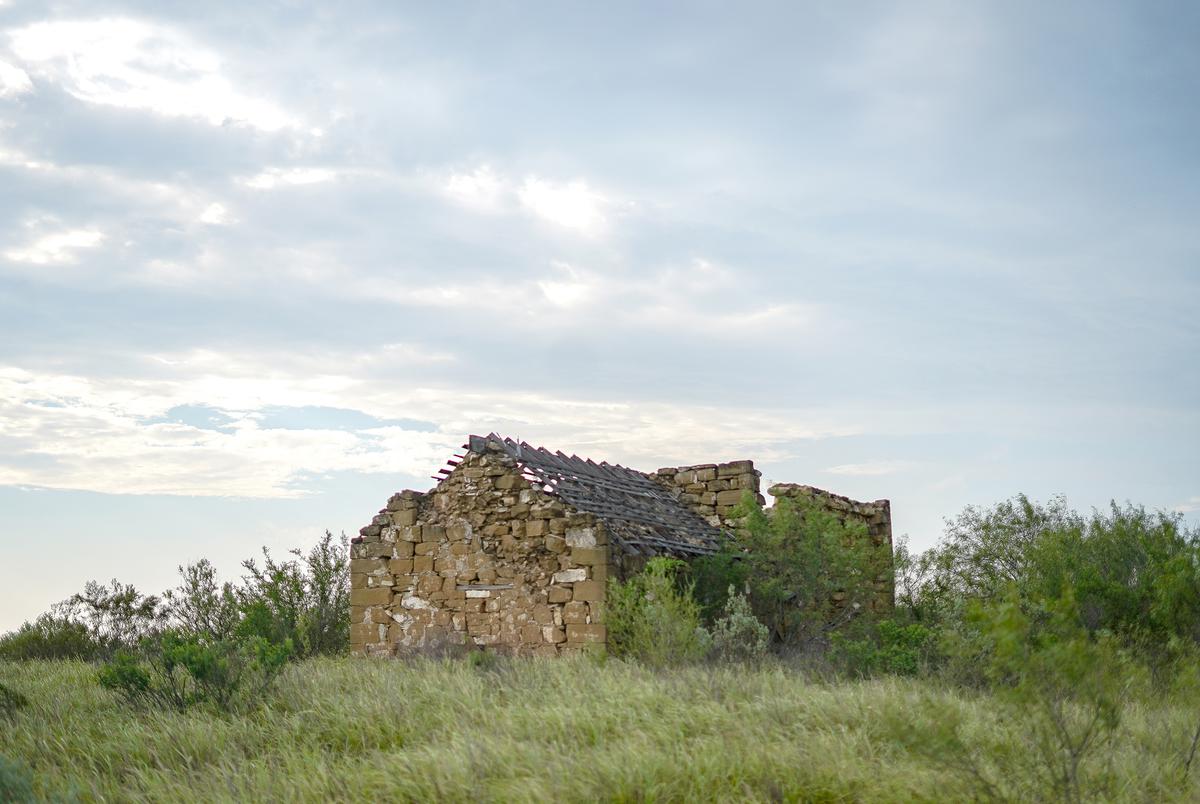 Ruins of a settlement called Rancho Dolores, which dates to 1757, sit on Gerardo Vargas' property near the Rio Grande in Zapata County. Credit: Jessica Rodriguez for The Texas Tribune

Cigarro is the board president of the Rio Grande International Study Center, and said she is concerned about how wall construction would impact wildlife and water quality of the Rio Grande. Cutting new roads near the river would cause runoff and dump silt into the river, she said.

Trump’s proposed border wall would have been built 200 feet north of the river and cut a swath through Cigarro’s land, she said. For her, the thought of being cut off from the river is “soul crushing” because she bought the land with the vision of her five children — who are currently in college — raising their own families in “a place that’s so full and vibrant and rich and respectful of this international border… and the only way that could happen is if we’re not considered a prison colony with a stupid barrier along our border.”

Hull said she’s also concerned about how a wall will impact the wildlife that depends on access to the river. She said around dusk one day a couple weeks ago, she was sitting in her backyard, looking at the Rio Grande, when a curious bobcat came within 3 feet of where she was sitting. It watched her for a while before disappearing to the brush.

“It’s just heartbreaking to imagine this being destroyed for something just so useless and is just part of a political game,” she said. “It’s just so heartbreaking and frustrating and infuriating.”