The autopsy for Nicholas was conducted Jan. 29, while Tuttle's was completed Jan. 30.

Records show the cause of death for both Nicholas and Tuttle was multiple gunshot wounds.

The report for Nicholas shows the 58-year-old suffered two gunshot wounds, with one shot to the chest and one to the thigh. Additional wounds on her right thigh and right leg were noted as the result of possible bullet fragments.

Dennis Tuttle was shot up to nine times. Tuttle suffered wounds to the head, neck, buttocks, wrist and hand.

The release of these autopsies has been a point of contention for both families. The attorneys for Nicholas told Channel 2 Investigates they received a copy of the report Thursday. They are still awaiting Tuttle's report.

Both autopsies were reviewed by the deputy chief medical examiner for Harris County, Dr. Dwayne Wolf.

Channel 2 Investigates is reviewing both reports for additional details and reaching out to family members for reaction.

Houston Police Chief Art Acevedo said the internal investigation into the raid should be complete by the end of April.

The District Attorney's Office said it hasn't seen those findings yet.

KPRC2 asked HPD when it expects the internal investigation to be completed, we have not yet received an answer.

Trauma from "minor blunt force injuries" was also found on his left ear, lacerations around his neck -- a pattern consistent with a necklace, abrasions on his left, upper abdomen and injuries to his extremities.

Under the heading "additional firearm finding," the report states a gray-black residue was found on Tuttle’s left index finger that "may represent soot deposition" that is "not clearly associated with any specific gunshot wound." 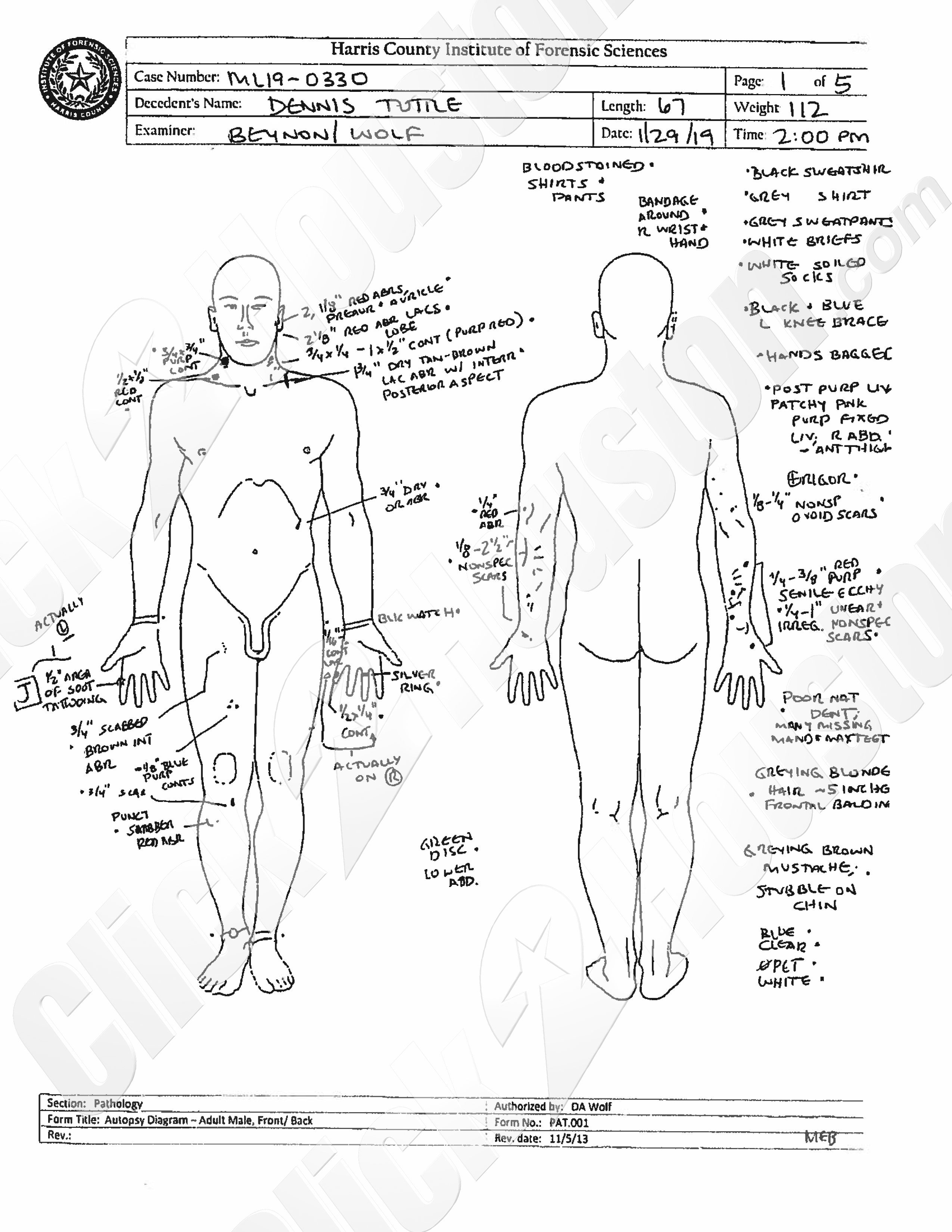 She also suffered "minor blunt force injuries" to the bridge of her nose, the right, lower side of her abdomen and right arm and left leg. 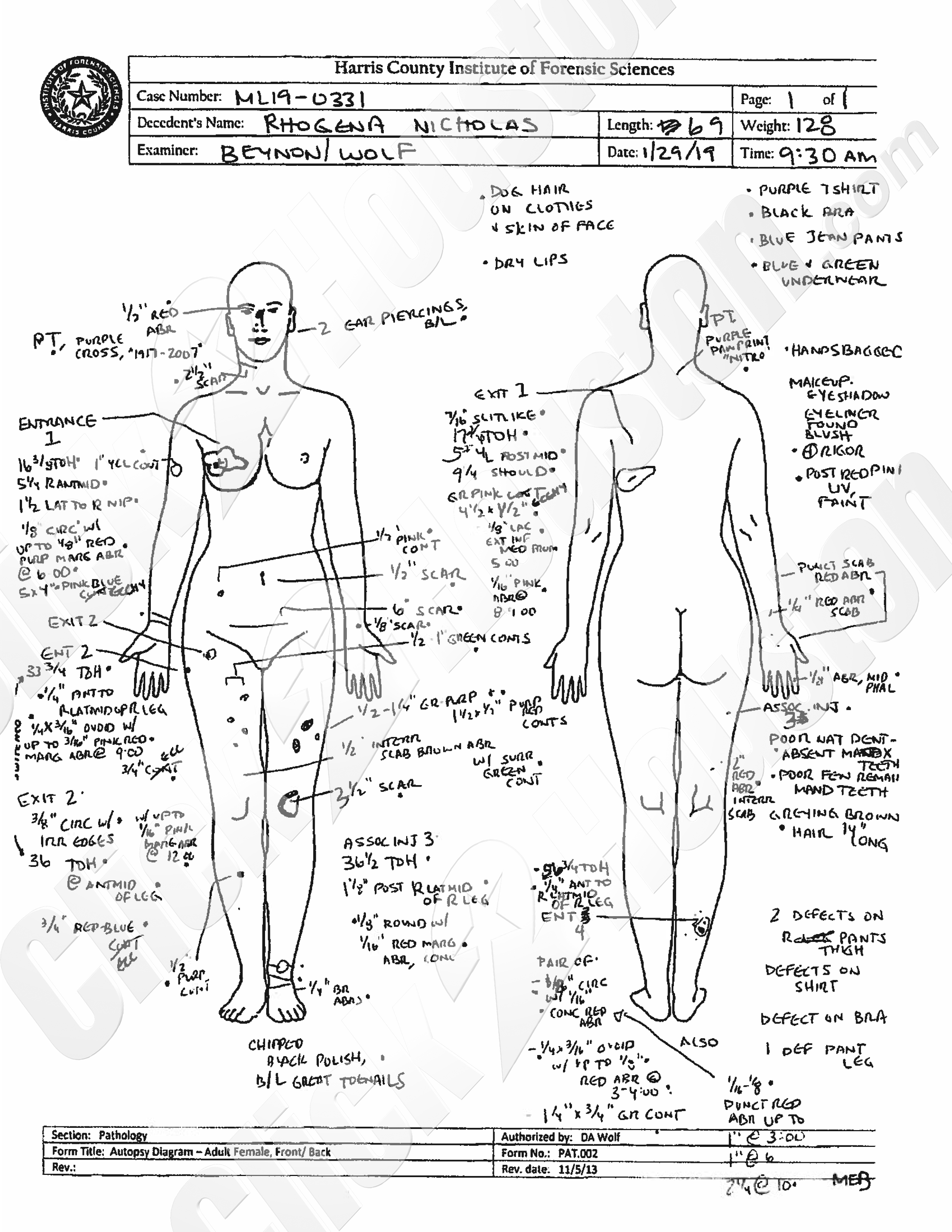 Attorneys for Nicholas' family released a statement saying in part:

“The autopsy report confirms a growing list of troubling questions about the conduct and claims of HPD before, during, and after the out-of-control and unjustified attack.

“The Nicholas family’s search for the truth of what happened to Rhogena that terrible day on Harding Street will continue. This week, we formally invited the Texas Rangers to attend our ongoing investigation at the home with nationally recognized crime scene experts. The state agency, which both attended the incident scene and assisted in a canvass for some time after to collect evidence, including videos, declined the invitation.

“No matter what is learned going forward, it’s clear Rhogena did not deserve to be executed in her own home. Through their independent investigation, the Nicholas family is committed to helping protect the community and other families from continuing to face terrible ordeals like this one. Until then, the family thanks to their Houston neighbors, family, and friends around the nation for the condolences and support extended to them in the aftermath of Rhogena’s unjustifiable death.”

Eric Davis, the felony trial at the Harris County Public Defender’s Office, has been an attorney for 25 years and has seen his share of autopsy reports.

He looked at the 51-page report of the couple killed during the January raid.

”Looks like he was shot a lot more than she was, and his autopsy is much more extensive, it’s very extensive autopsy report,” Davis said.

"They did a full workup on him and in the sense of having anthropology report, it did a couple consults about microscopic injuries as well. It’s a very thorough autopsy report, in regards to his ( Tuttle),” Davis said. “When you have an autopsy where you have somebody who has a lot of injuries you’ll see that.”

In the report, the medical examiner consulted with others in the field.

“So it’s not unusual, you don’t see it in every case, most autopsies are not this involved, but this body had sustained a lot of damage,” Davis said.

Based on the new information, he believes the next step is for the district attorney to review the information.