WATCH: Around the Table with Animal Advocates

Highway 6 in Santa Fe shut down in both directions due to water main break, TxDOT says

Bush died Tuesday at her Houston home. She was 92.

The casket of the matriarch of the Bush dynasty arrived at St. Martin’s Episcopal Church off Woodway Drive about 5 a.m. She was in repose there from noon until midnight.

The patriarch Bush arrived at the church just before 1 p.m. and, for about a half-hour, he shook the hands of people filing past the casket of the former first lady.

People attending the viewing lined up Friday morning at Second Baptist Church, about 3 miles away, to undergo a security screening and board METRO shuttle buses that took them to St. Martin's.

One of them was Sandra Johnson, who never met Bush personally, but always admired her.

“She represents so much dignity, elegance, family values -- so much that’s been lost currently, I feel like, for America. So it’s just really nice to honor her in that way,” Johnson said.

Othes had met Bush over the years, coming to know her not only as national icon, but also as a neighbor.

Diane Anderson remembered meeting her at the Bush Library.

Bush and the president were Karen Long’s customers over the years at the Galleria store where she works.

“They’re just beautiful people and I really, really admire them and respect them,” Long said.

Carlos Ramon was a volunteer for George H.W. Bush's presidential campaign in 1992. He remembers Mrs. Bush treating him to a hamburger lunch.

"She always would tell me, 'Love your wife, and do good,'" Ramon said.

The line flowed smoothly as mourners lined up to go through a security check and then boarded shuttle buses for the trip to St. Martin’s.

For a time today, as the line wound through the chapel, George H.W. Bush was on hand to greet them and thank them for coming. 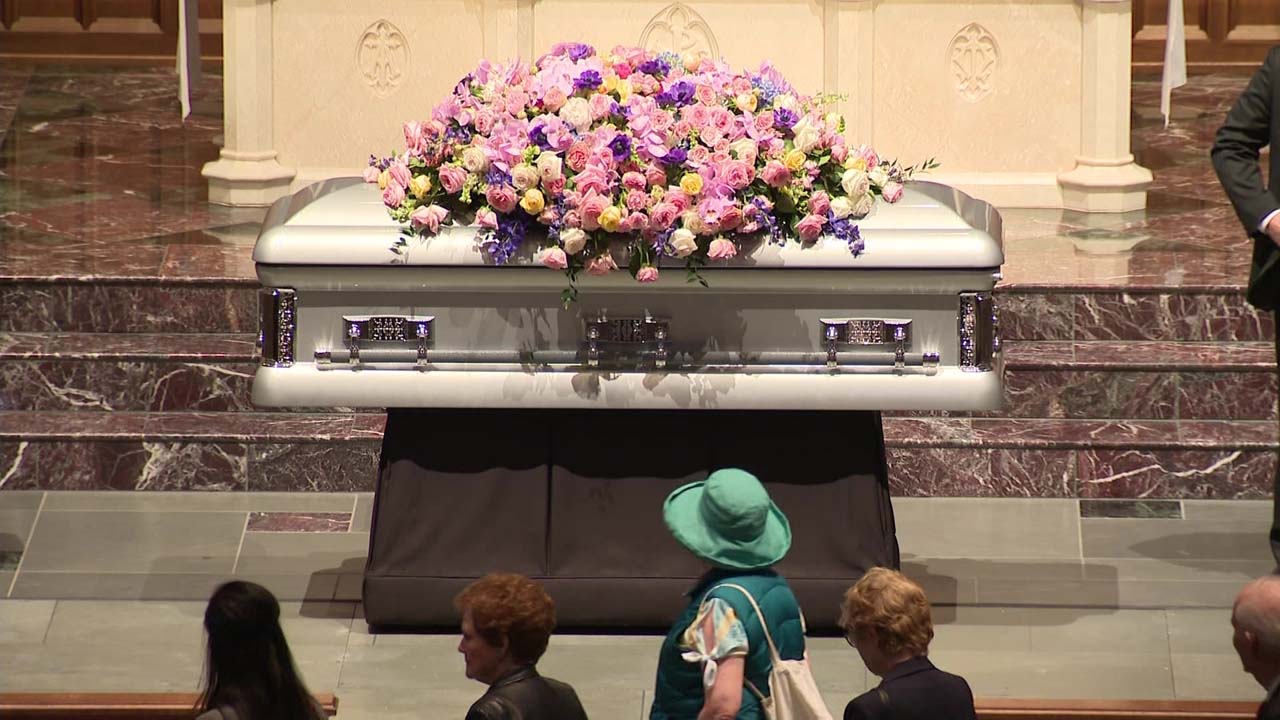 It was a special moment for Sheena Shaghaghi, who met the first lady as a child when she came to her school -- Barbara Bush Elementary School.

"It was a really memorable moment. I want to go and pay my respects to her once she passed away. Seeing the president there, you could see he was heartbroken and I was happy I got to pay my respects to him as well. They made a big impact on my life," Shaghaghi said.

"It's worth it," said Dorothy Henson, who woke up at 3:30 a.m. to make sure she was the first person in line. "She's a wonderful role model and we have a lot in common. I love baseball, and I love pearls."

"Weston, Florida," said Lucy Orlando, who was also one of the first 10 people in line. "I came in from Florida since yesterday to be here today."

Only people aboard the buses were allowed to enter the church, authorities said. No foot traffic was permitted.

Fifty people at a time loaded each shuttle. Some of the thousands who used the shuttles described the process as smooth as they said their goodbyes to Bush.

“I said, 'Lord, I’m giving this day just to respect her and who she was,'” said Charlotte Kaufin. “She was such a wonderful, wonderful loving lady and I will always remember that.”

Casey Redd, her husband and her three daughters also went to pay their respects to the former first lady. Redd worked in the White House under former president George W. Bush and recalled her interactions with Mrs. Bush.

“The four years I was there in D.C., Barbara would come to the West Wing and check on all of us young Texans and staffers that were there to make sure her son was doing a good job and treating us well,” Redd recalled.

Redd said she remembers Bush as sweet but witty.

“At the end of the day she had the biggest heart and so I just feel it’s very important for my three daughters to go and pay our respects for America’s queen,” she said.

As the buses loaded up at Second Baptist Church, they also returned carrying gracious and heavy hearts.

“It made me want to cry,” said Karen Smith of Houston. “I kneeled seeing her in state, lying in state. It’s just hard to express. She just takes my breath away.”

“She was the embodiment of what it was like to live a full and joyous and happy life,” Miller said. “And if I had my life to do over again I would pattern it after her.”

Authorities said no backpacks, large bags or weapons were allowed, and photography was prohibited.

"Treat this as if you're going to a sporting event or to an airport," Houston Police Chief Art Acevedo said.

Woodway Drive from Chimney Rock Road to South Post Oak Lane was closed to most traffic for a portion of the day.

Even stricter traffic closures are in place Saturday for Bush's memorial service, which begins at 11 a.m.

Follow KPRC2 social media coverage of the viewing throughout the day in the box below.