If you've followed Texas high school sports coverage over the past decade, you're probably familiar with eight-year journalism vet Brady Keane. But, he's made even more noise as a Texas high school coach since the start of the 2019-2020 school year. It may seem like an unusual career move, but he's satisfied with his decision so far.

"It was definitely something that I always flirted with doing at some point in my life, but I wasn't necessarily sure when I wanted to get into it," said Keane. "The more I was around coaches and kids reporting on sports and stuff, I found myself wanting to get into a profession where I had an opportunity to impact kids on a daily basis and make more of an impact. And so, it was an easy decision for me to make once I was looking for something like that to transition into pursuing education, teaching and coaching."

"I definitely do not have any doubts about the move I made," Keane added. "I love every day waking up and having the opportunity to teach and coach. it's a unique opportunity to be in a situation where you can make an impact on a kid's life every hour of the day just by what you say. That's what I was looking for when I made the move and it's lived up to every bit of that."

Keane kicked off the new stage of his life with multiple responsibilities at Winters High School for the 2019-2020 school year. He landed as the football team's wide receiver and defensive backs coach and basketball and baseball assistant coach because he contacted the school's athletic director, Matt McCarty, who served as his position coach when he played football for Bandera High School.

"I was really excited to have the opportunity to work for [Coach McCarty] last year and he's one of my biggest mentors and someone I feel like I learned a lot from," said Keane. "Coach McCarty taught me a whole lot about managing a program and helping build kids up and getting them to where they need to be."

"Coach [Kelvrett] Mattox was our head basketball coach and he really took me under his wing," he continued. "The best thing that he did for me on the basketball side was give me a ton of responsibility. I was hungry for opportunities and he was quick to give me opportunities to grow and give me responsibility on the basketball court, so that I would be able to take over my own program one day. So, I [also] owe a lot to him." 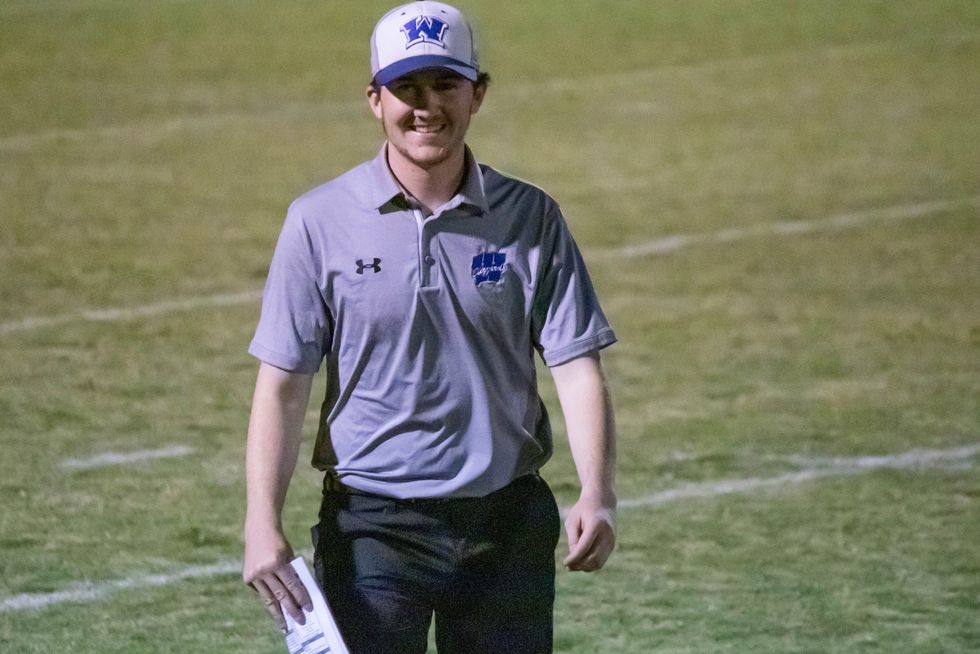 Keane definitely left a mark during his first year of coaching. He was named a 2020 Texas Association of Basketball Coaches assistant coach of the year finalist and experienced the other side of an interview for the first time when KTXS' Evan Nemec interviewed him for a story.

"It was a unique experience being on the other side of it," said Keane. "I feel like I'm in a good position to handle the interviews because I can analyze it from both sides."

Because of Keane's journalism background, he understands the importance of media relations and can use the communication skills he developed through his former industry to communicate with both his athletes and media members.

"If you ask any of the media outlets that cover Winters High School, I think that they can vouch for the fact that I love working with the media and I took that upon myself when I was there last year to make sure that our kids got as much recognition as they could possibly get," said Keane. "I know what reporters are looking for and what they need to be successful."

"It was kinda information overload for them," he admitted. "But, I try to get them as much info as I could because I didn't want there to be any reason for our kids not to get recognized for the good things they were doing. I felt like you could really see a difference in how much recognition our kids got for what they were doing in Winters last year and it's something I will carry with me to Bandera. Making sure I'm doing everything in my power as a coach to take care of the media and getting my kids' information to them, so that they can be recognized when they're working hard and producing results on and off the court."

Then, he was offered his dream job at his alma mater this summer.

"It was a situation where I was really happy in Winters and really didn't plan on leaving," said Keane. "Once I saw that the head basketball job in Bandera was open, it was one of those when I got into coaching that was the job I set a goal for myself to get to. That's where I wanted to be. I wanted to be back in Bandera at some point. So, I applied because that was my ultimate goal. And once the offer was made, it was really a surreal moment."

"It's such a great feeling to be back," added Keane, a former Bandera basketball, football, baseball, soccer and track athlete. "Be a part of the community that I grew up in and have an opportunity to make an impact on the kids. I had a lot of great coaches and teachers in Bandera so, to follow in their footsteps, it's definitely an honor and I can't thank Dr. [Jerry] Hollingsworth, our superintendent, and Dr. [Ken] Vogel, our principal, enough for giving me that opportunity. They're obviously taking a chance on a guy who has one year of coaching experience, but I'm going to give it all I have and there's nowhere else I'd rather be."

It's not just the fact that he attended Bandera ISD from the fourth grade to senior year of high school. The high school's boys basketball program played a major role in his life. He was a member of its varsity team as a junior and senior during the 2013-2014 and 2014-2015 seasons and was heavily influenced by the head coach at the time.

"My biggest mentor in education is Coach Bob Shearhart," said Keane. "He was my head basketball coach in Bandera when I was in school and he's since passed away now, but he had a huge impact on me. The way he approached things as an educator first. He was just as passionate about teaching English IV in the classroom as he was coaching basketball or football or baseball, and I think that's the way you have to be to be successful in this business. So, I learned a lot from him. He was in Bandera for a long time, so it's really an honor to hold that position and I don't take it lightly." 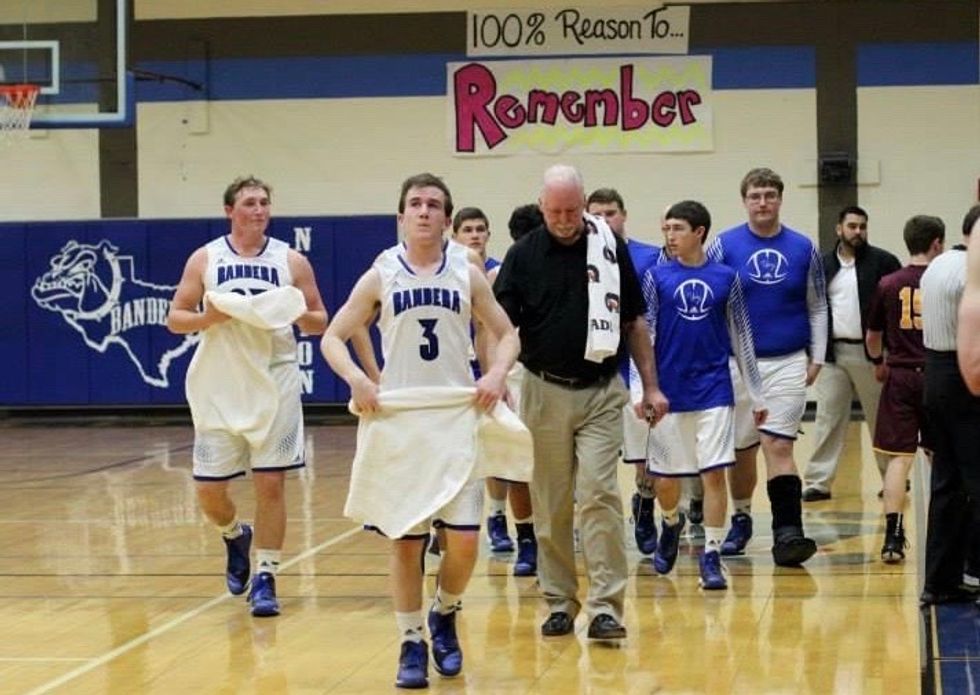 As important as his journalism career has been in his life, it's fitting that he returned to the school that launched that part of his life.

"I was always a pretty good writer when I was growing up and Bandera had a great journalism program at the high school, so I got pushed in that direction from an early age," said Keane. "Really from the time I was a freshman in high school, I was writing for the newspaper in town and getting paid for it and doing a few different things for outlets in San Antonio, so I had a lot of opportunities early on and got to build a lot of experience. I grew in the field over the four years that I was in high school here and North Texas had a great journalism program, so that's what drew me up there and then it kept going from there."

"I was fortunate to work with a lot of big time publications," he continued. "I wrote for Dave Campbell's Texas Football for almost three years and the Denton Record-Chronicle and other things mixed in. I traced it back to Bandera and the opportunities I had to get real world experience and being able to build on that over the course of eight years doing journalism."

Keane is entering a position that's seen a lot of turnover in recent seasons, but Bulldog fans can expect a different trend with him at the helm.

"One of the big things that I hope to bring to the Bandera basketball program is stability," said Keane. "Since I graduated in 2015, we've had five different basketball coaches. I'm excited to be here and I'm not looking to go anywhere and I can't wait to build the program from the ground up. I feel like we have a really good foundation coming back. Coach [Carl] Lee, who was here last year, did an outstanding job with these kids and got them working to where they got back to playoffs last season for the first time since 2016.

His parents, who have remained in Bandera since he left for college, are also excited to see his hard work pay off.

"My parents are definitely my biggest fans," said Keane. "This past year when I was in Winters, they would come to as many games as they could, but it's about a three hour drive and so that was kinda hard on them sometimes. But, they were thrilled too to have that opportunity to have me back in town and be able to come out to games. They treat it like it's still one of their kids playing. They'll be up in the stands cheering and be at just about every game I'd imagine."