Spring-like warmth through the weekend!

PHOTOS: Houston-area sunrises, sunsets are the stuff of Creamsicle rainbows this week

Texas A&M senior Seth Small is used to big-time moments. He had more than a few kicking for the Katy Tigers in high school.

Saturday's kick, however, is one Small will never forget. Small's 28-yard field goal as time expired earned the unranked Aggies a shocking 41-38 upset over No. 1 Alabama at Kyle Field.

"It was probably the third best moment of my life, right after I accepted Jesus into my heart as my true Lord and savior and after getting married to my wife this summer," Small said. "I rank this three."

Small graduated in 2018 from Katy, where he was a three-star prospect rated as the top kicker in the country by 247sports.com. He made 12 field goals and was 68-for-70 on extra points as a senior. He had a career-long field goal make of 50 yards as a junior.

In the season-opener of the 2017 season, Small drilled a 39-yard field goal as time expired to beat The Woodlands, 24-21, at Legacy Stadium. 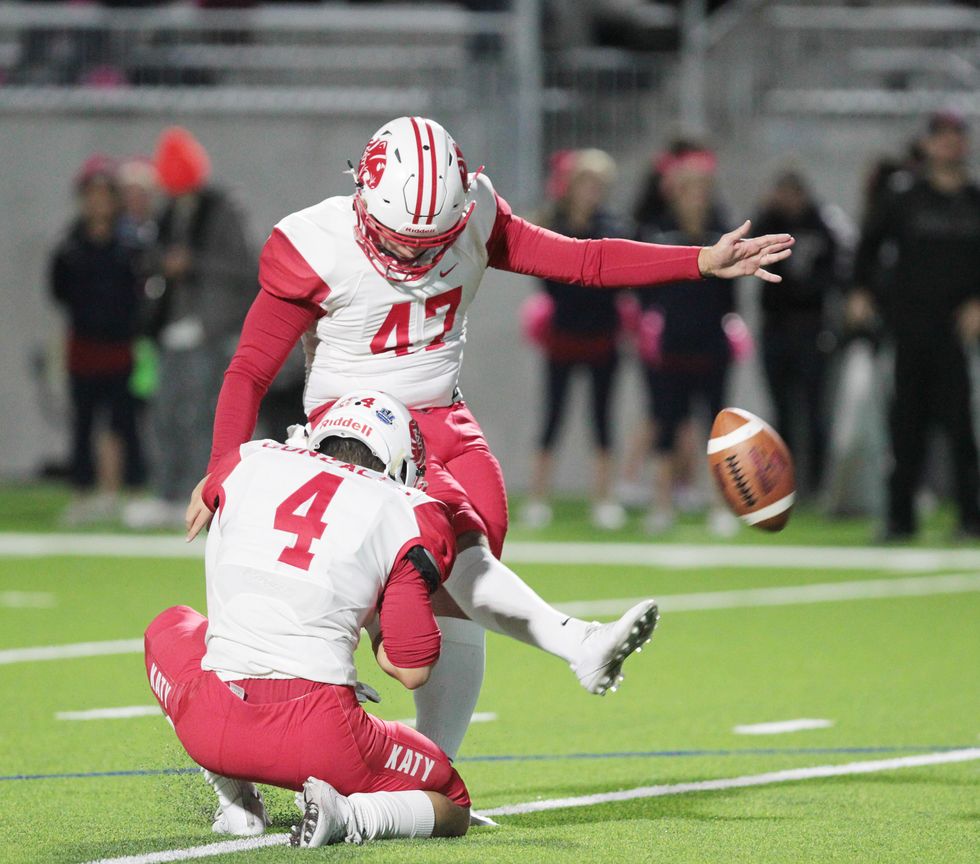 With two seconds left against Alabama, Small, who had connected on a 38-yard field goal earlier in the game, took a quick drink from a water bottle, trotted up to the 18-yard line, lined up his sights accordingly, stepped backward to the left, and booted a shot that looked like it was heading far left before drifting back in toward the inside of the left upright and sailing off into the night.

"It was not just me," Small said. "It was the defense getting a stop, the offense moving the ball down the field. Connor Choate snapping the ball. Nik Constantinou, my holder. All the guys blocking on the line. It's not just me. I just get to do a little fraction of it."

That fraction set off frenzied glee within Kyle Field, as the second-largest crowd to ever watch an Aggies football game flooded the field.

"It felt like 100,000 were on the field with us the whole night," Small said. "The 12th man, the stands, those students … they don't sit down. It was packed the whole entire game. Nobody left. We have the best fans in the nation, and that's what makes it so special to play at Kyle Field."

Seth Small. Could not have happened for a better man. One of @FootballKaty’s finest. Still remember fondly when he drilled one to beat The Woodlands. So ecstatic for him. @KatyISDAthletic pic.twitter.com/RjucZ3dxpl

Not surprisingly, considering how admired and respected he was at Katy, Small has emerged as a leader for the Aggies.

He lockers next to starting quarterback Zach Calzada. The last two games, Small said he has prayed with Calzada before taking the field.

Small was like a proud big brother when discussing the standout performance of the much-maligned Calzada, who completed 21 of 31 passes for 285 yards and three touchdowns to one interception, showing grit and heart while fighting through a leg injury late in the game.

"Zach's first day on campus looks much different than how he looks now," Small said. "To see how he's matured as a person, as a football player, as a leader on this team has been incredible. I hope he says that I played a role in that, as an older guy trying to influence him a little bit, but that's all Zach. He's worked his tail off. He showed what he was capable of tonight."

Small is the kicker on returns during practices each week. Every time this week, when Achane would finish a return run, Small would tell Achane, "They're soft on kickoff. If you want to break one loose, it's going to happen."

"I'm glad he took my advice," Small said. "Alabama had just scored, (and) we took the momentum right back. It was a shift in momentum to give us that spark."

Small also praised the coaches for putting players in position to make plays. As a team, he said, "it clicked this week." He has been amazed by Fisher's ability to gauge where the team is at and deliver the appropriate message necessary.

Small's message all throughout the Alabama game? Psalm 23:1. "The Lord is my shepherd, I shall not be in want."

"That's a moment I live for," Small said of his kick heard 'round college football, "so I can deliver on my part like they've been delivering on their part all night long."