HOUSTON - It was another wild night of Texas high school football in Houston.

One of the biggest games of the night had to be out at Tomball ISD's new stadium as district rivals Tomball and Tomball Memorial locked horns in the annual Tomball Bowl.

It was "big brother" Tomball that came out with the 48-35 victory, capped by a wild play by Army-commit Cale Hellums where he did his best Johnny Manziel impersonation by running wildly before throwing a crazy touchdown pass with just four seconds left.

WHAT IN THE NAME OF @JManziel2!!! What a finish to the @FootballTomball win over Tomball Memorial!! @calehellums10 ran like 50 yards to make that throw!! #txhsfb @KPRC2RandyMc @MaxPreps @texashsfootball pic.twitter.com/ULrPWWPTey

The win moved Tomball to a perfect 5-0 on the year and they have now outscored opponents 220-100 on the season.

Another impressive win came from Klein Cain. Since that season-opening loss to Bridgeland on ESPNU, the Hurricanes have been a force. Now winners of four-straight contests including blowing out Klein, 42-14, on Friday. Klein Cain improves to 4-1 on the season.

Other teams that kept the good times rolling were Grand Oaks as they move to 5-0 with a 50-6 win over Chavez; Magnolia West also moves to 5-0 and 3-0 in district after beating Caney Creek 42-6 on Friday. College Station also remained unbeaten in that district with a 35-6 win over New Caney.

It seems that College Station and Magnolia West are on a collision course for November 5, the regular season finale, being for the District Championship.

Looking towards next week already, there's a juicy showdown in District 14-6A as undefeated Spring and Westfield are set to collide. Last season, Spring won that game on a Hail Mary from Bishop Davenport to TJ Sims to win it at the end. What happens for the encore?

Check out a full scoreboard from Friday's action below. 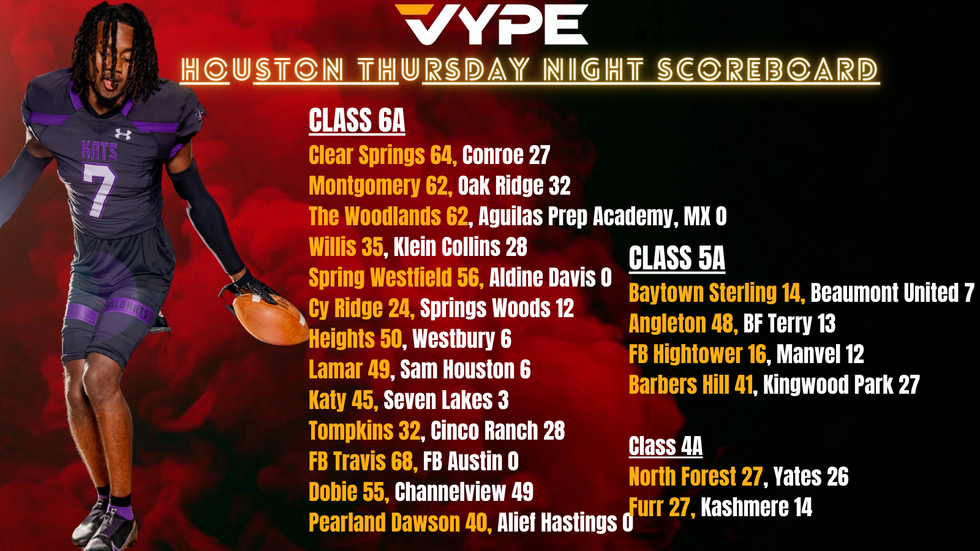