Driver dead after street racing on I-10 in Chambers County, deputies say

At 6-foot-5, 330 pounds, Bryce Foster is a physical wonder. A larger-than-life human being born to play sports. The former Katy Taylor star dominated on the football field and the throwing ring in 2020-21, earning a scholarship to compete in both sports at Texas A&M.

The latest honor for Foster—the No. 65 overall prospect in football for the class of 2021, per 247Sports and a nationally-ranked thrower—came Thursday, when he was recognized as the 2020-21 Gatorade Texas Boys Track and Field Player of the Year. Foster won the Class 6A shot put state championship in May with a throw of 71-feet, 1-inch, the longest of any high school athlete in the country. He also won bronze in the discus at state, and his mark of 210-feet, 10-inches at the district meet on April 6 was the longest high school throw in the country this year.

"It's childhood dreams coming true," Foster said. "Whenever I was younger, I would see things like the Gatorade Player of the Year, and it'd be these big names winning. I'd think, 'Man, imagine if I could do that. That'd be really cool.' I used to look up to those winners as a kid, and now maybe there's young kids out there looking up to me. It's a great thing for me to be a role model for those kids."

What advice would he give those kiddos idolizing him?

"A big thing is stay consistent," Foster said. "You're going to have days where you just don't want to do it anymore and you want to quit. But everyone has those bad days. You want to look for the good ones and have fun. For me, at the state meet, when I was throwing the shot, I was having a really bad meet and trying to figure out what was going on. I just went back to whatever my dad told me, which is whatever happens, you have to forget it. The most important throw is the next one, and as soon as I remembered that, I flipped a switch and turned it on. Just continue to do what you're good at and don't listen to too many people, because you'll confuse yourself."

I just…. I don’t know what to say. Thank you @Gatorade! I always had a dream of achieving this and I finally did it! pic.twitter.com/NWavwQs5RF

But more than the vast athletic prowess that belies his physicality, or his affinity for throwing small objects very, very far, it's Foster's humanity that is perhaps most impressive. He is a role model away from sports as well.

When people speak about Foster, they talk mostly about his empathy and care for others. During his sophomore year, Foster's chemistry teacher, Julie Wells, who also helped lead the PALS program, noticed the same and recommended he interview for the program.

"Bryce is one of the hardest-working, most respectful and genuine young men that I have run across in 34 years of coaching," Taylor head football coach Chad Simmons said.

After an intensive interview process that dove deep into who he was as a person and his character and make-up, Foster was one of 40 kids selected for the program out of his entire class. He mostly worked with one kid from each school, but oftentimes worked with more than one at a time. Teachers learned to pair other kids up with Foster because of his sincere interest in their well-being.

"It was a lot of fun seeing the improvement from those kids, whether it was a troubled kid who bullied who's now one of the most-liked kids, to someone who was getting bullied and is now comfortable expressing himself around peers," Foster said.

In particular, Foster identified closely with kids who were bullied.

"Whenever I was a kid, I was never a fighter, outside of football," he said. "So, people saw me as being big and thought I looked weird. I was made fun of and everything like that. So, whenever there are kids that look different or have something maybe wrong with them, I'm able to relate in a sort of way. I can help them get through it and help them express themselves." 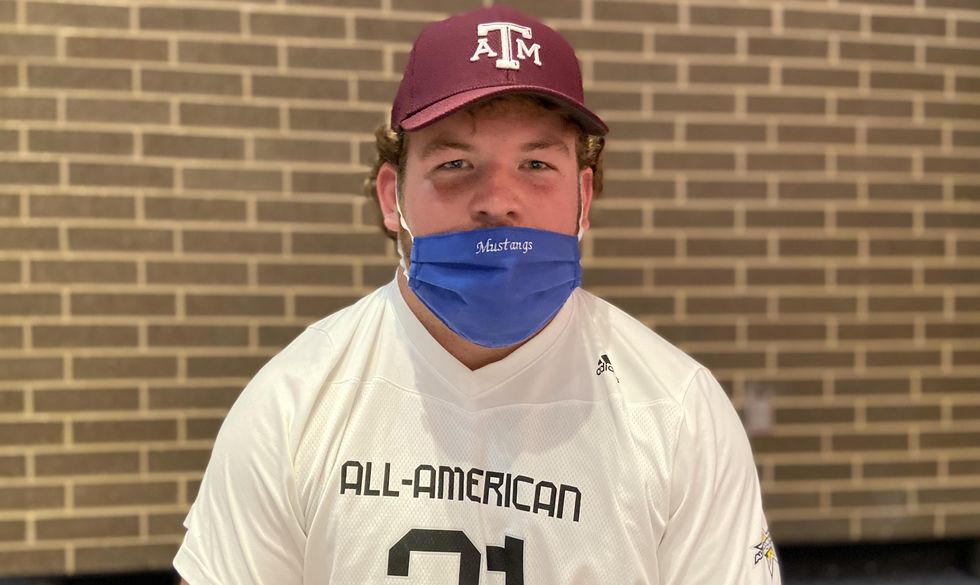 Foster grew up around parents, Eric and Heidi, who stressed the 'golden rule' of treating others how you want to be treated. He took that to heart. Foster is a people-pleaser, which is why the recruiting process was one of the most stressful and difficult things of his young life. As much as he loved pledging to Texas A&M, he was aware that he had disappointed so many other schools. That dampened his spirits.

When other people smile, Foster said, his days are better.

"No matter who you are, I'm going to treat you with the utmost respect," Foster said, "and I feel like I deserve to be treated the same way back."