Boil water notice issued for the entire City of Houston after water pressure dropped due to power outage, officials announce

ARLINGTON - Last week, Katy just completely ran away with things in the first half over Buda Hays, using a dominating defense and a strong ground-and-pound offense with timely passes sprinkled in.

Once again, Katy, which has looked like vintage Katy this year, made things miserable on both sides of the ball for Cedar Hill on the way to an emphatic 51-14 win - Katy's ninth state championship and the first since 2015.

The game unfolded exactly as Katy would have liked: slow; low-scoring. But once the dam broke on Cedar Hill's defense, Katy just poured it on.

No matter what Cedar Hill tried to throw at Katy in the first half, nothing worked, and nearly everything worked for Katy on the way to a 24-0 halftime lead.

Isaiah Smith takes off on the right side of the field for six to give Katy another score before the end of the half. The Tigers lead Cedar Hill 24-0 with :36 seconds left in the second quarter.@tommy_yarrish | @VYPEDFW | #UILState pic.twitter.com/5DZ3xrAHJw

Cedar Hill finally found some life after a fake punt brought the ball all the way down to the Katy 4. Cedar Hill scored a few plays later but it was too little, too late.

Seth Davis took home the offensive MVP with 124 yards and a touchdown with his brother netting 104 yards on the ground with a score of his own.

As was thought to be the case before the game, Katy’s rushing attack and tough defense was just way too much for Cedar Hill to handle, with Kaidon Salter unable to do much. 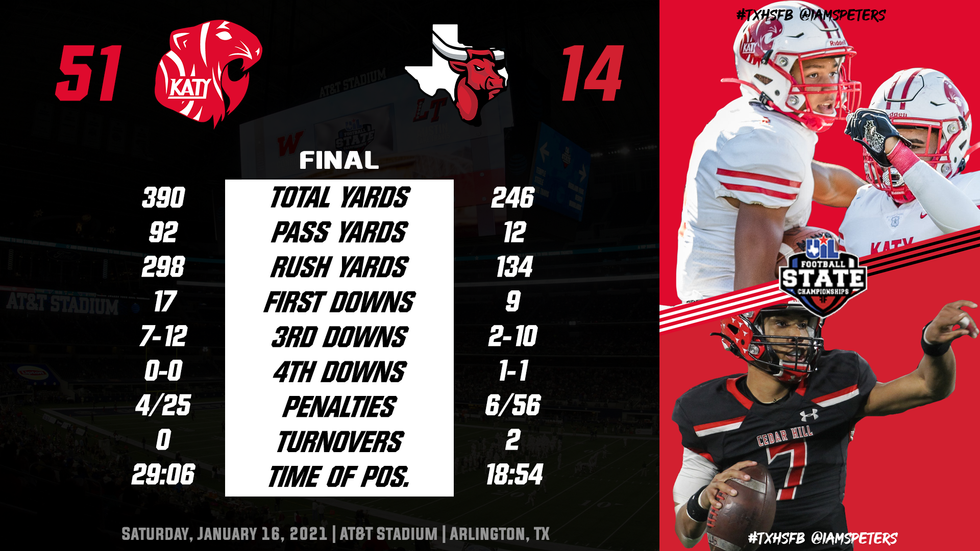