TRIVIA: It’s Clyde Drexler’s birthday! How well do you know this NBA legend?

Have you seen this man? Houston police say he sexually abused a child for a year

THERE IS SOMETHING ABOUT TEENAGERS THAT IS… WELL… UNPREDICTABLE.

Cy Creek's Rori Harmon has been a national basketball recruit since she was in middle school. The spotlight has been white hot as she has exceeded everyone's expectations as a 5-foot-6 point-guard.

Last year, the Cougars rolled through the regular season all the way to the state finals against super-power Duncanville.

Harmon was sent home before the state championship game for violating team rules – a tough pill to swallow for coach, player and team.

"It was very upsetting and it was a big deal for me. I've learned a lot from that situation," Harmon said. "I just had to move on and not let it define me as a person and I've followed through with that."

Harmon is a magnetic force on and off the court. She's a great student. She's a leader. She comes from a great family. She's a good teammate. But she's a teenager, too.

"My teammates know it's a different mindset and a different approach I'm taking this year," she said. "I think my teammates still trust me after what happened. I come to practice and work 110-percent. We are on the same page and I'm always going to be there for them.

"Coach (Jennifer) Alexander has taught me how to be a better leader ever since I've been here as a freshman. She wants me to take care of my teammates, not just on the court. I really care about them and I want to know how their emotional state is, not just what they do on the basketball court." 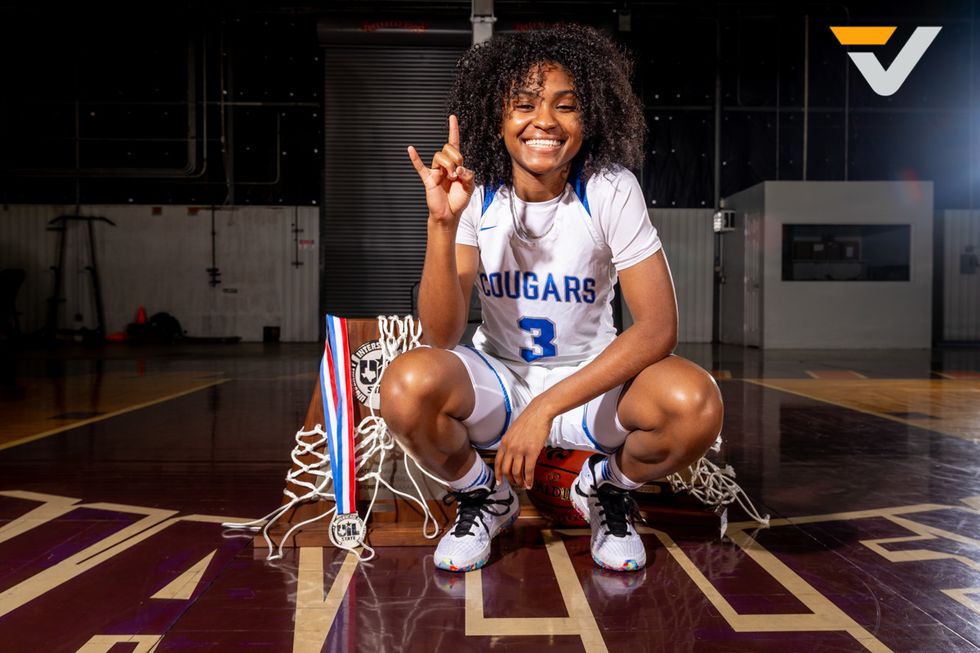 Harmon's journey started back before high school. She got her first offers in the eighth grade and her legendary status was already in place when she entered Cy Creek.

"My parents told me if you want to do something in life, go do it," she said. "I've always had that competitive side, but they know how to motivate me to keep me going. When I got that first offer, it really gave me confidence that this was my future."

As a freshman, she and her running-mate Kyndall Hunter led the Cougars to the State Tournament. Two freshmen led a school which opened in 1977 to its first state tournament in its nearly 40-year history. Something special was happening.

"When I got here, I thought that you just won district and that was it," she laughed. "I didn't really think about the playoffs or going to state. We were excited to get there when we figured it out."

As sophomores, Harmon and Hunter led the Cougars to the Regional Finals but fell to Summer Creek. However, their star-power was on X-Game mode for their summer showcase performances.

The pair would crack the ESPN Girls High School Rankings. The offers began pouring in along with the state and national accolades. To date, Harmon is No. 10 in the country and Hunter is the nation's No. 25 player.

On April 24, Harmon would make it official and commit to the University of Texas. On October 4, Hunter would also commit to the Longhorns. On November 11, Hunter and Harmon both signed with Texas.

"I just knew that the coaches and program were going to take care of me as a player and person," she said. "They are doing everything they can to help me lead them to a National Championship and that's all I can ask for. I want to take over right away."

Harmon has that big, perfect smile of a killer on the basketball court. She has bright eyes that see things developing three steps before you do. But she's still 5-foot-6 … maybe.

"I don't think about being small on the court," she laughed. "Most people say I play bigger than I am. Getting rebounds is a little harder but I'm pretty good at it. I just work on my speed to create space. I can't have people blocking my shot."

It's no wonder her favorite players are Allen Iverson and Kyrie Irving, both under-sized but play with a huge chip on their shoulders.

"Yeah, I get everyone's best game all the time," she said coyly. "Sometimes, I've got to remind them who they are guarding."

With all the pressure of recruiting and the spotlight of leading Cy Creek to state again, is she still having fun?

"It's probably more fun now, than ever," she said. "That feeling of winning…the adrenaline of playing basketball is just really good. There's nothing like it."

ORDER your very own copy of the 2020 VYPE Houston Basketball Magazine for $4.99 and have it delivered to your mailbox! - CLICK HERE TO ORDER

Also CLICK HERE to view and order any photo taken at the 2020 VYPE Houston Basketball Photoshoot powered by Whataburger.