‘Kidfluencers’ are targeting your children with junk food ads

Galveston man charged after man found dead along I-10 in Wallisville, officials say

Despite no spectators being allowed, a four-team round-robin classic was anything but boring this past Saturday at San Antonio Christian School. The annual September Showdown that typically hosts 16 private and public schools had to be cancelled this year due to the UIL restrictions on tournaments and the various precautions taken due to COVID-19. Knowing the value of tournament play and all that you can learn about a team's strengths and weaknesses, four TAPPS schools wanted to still make it happen. All four teams were represented at the TAPPS final four in 2019. 3A state champion New Braunfels Christian Academy, 3A runner-up Round Rock Christian Academy, 5A runner-up San Antonio Christian, and 5A semifinalist Holy Cross of San Antonio were all back in action and made for a competitive day on the courts.

Host school, San Antonio Christian, walked away 3-0 on the day, but many sets came down to the wire. Leading attackers for the Lions were junior Lauren Crismore's 38 kills and junior Sadie Nelson's 37 kills. Setter Rebekah Wilks helped secure those kills with 61 assists on the day. The Lions, who have now moved up to TAPPS 6A, are coached by San Antonio's second all-time winningest coach Robin Gerlich. Gerlich is starting her fourth season at SACS and each year has earned a berth to the TAPPS final four. With a strong team returning, the Lions set their sights on returning to the big stage in November, regardless of moving up a division. 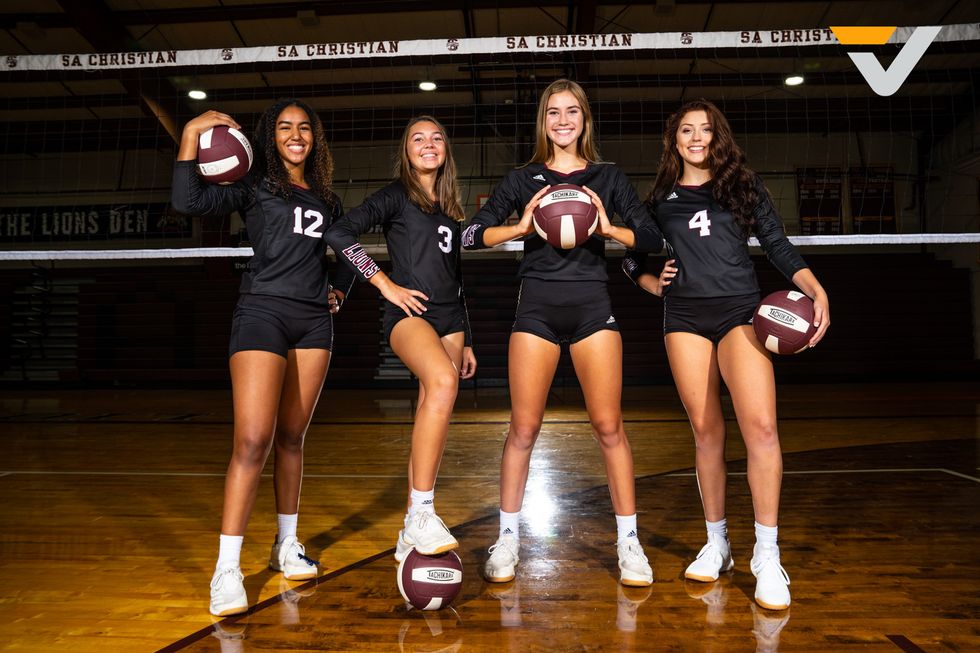 Traveling in from North Austin, Round Rock Christian returns this season focused, tall, and aggressive. Staying in TAPPS 3A for this alignment, the Crusaders looked ready to earn their way back to the Final Four. After losing to New Braunfels Christian in the state final last year, they came out this weekend and were hungry to come out on top. The Crusaders ultimately beat the Wildcats in two. With their leading attackers being sophomores Kelli Northup and Savannah Johnson on the day, the season seems promising. Ryan Holley, another Crusader sophomore, led all tournament teams' players with 11 aces. This young, but talented squad finished the day 2-1 and will be a fun team to follow this season.

New Braunfels Christian's Wildcats are the defending TAPPS 3A state champion and look to make that run again. They proved to be competitive and ready to defend the title. Although they only came out on top against Holy Cross, the Wildcats took SACS to three sets and only lost by two. The Wildcats have a dynamic offense matched with a steady defense. Lefty outside hitter and TCU sand commit Hailey Hamlett was consistent throughout the day on both front row and back row. The Wildcats have a dual-threat, as Hamlett's opposite is Stanford beach commit Camdyn Doucet. Both players led the team well and should be expected to be back at the final four this year.

The Holy Cross of San Antonio Knights have been to the TAPPS final four in four out of the last five years. Moving down to 4A for the new alignment, the team looked as though they are ready to work hard to make it back this year. Although they came out of the day 0-3 against some of the top private school teams in the city, they still know how to fight and put the ball away. Leading scorer Faye Wilbricht, who has committed to Texas A&M, continued to show her talents in the front and back row all day. Although the wins didn't come, the talent and drive are still there. The Knights' libero Alyssa Barrera was found covering all areas of the court and was a key component for the team. Barrera, now a junior, has been a varsity starter since her freshman year and continues to help the Knights succeed.

Even though the games and tournaments look different this year, the game is still the game. The rules are still the same, and you still play one point at a time. This season for these TAPPS schools is sure to be successful and fun to watch. We look forward to hopefully once again seeing these four teams back at the state tournament in their respective divisions.