Verlander, who turns 37 Thursday, hopes to remain among elite

No. 12 Texas A&M will travel to face No. 1 Clemson on Saturday afternoon in a rematch of one of the best games from the 2018 season.

The Tigers snuck past the Aggies at Kyle Field by two points, in what would be the eventual national champion's closest game of the season.

Here are 10 takeaways from the Aggies' media availability on Monday afternoon:

It was surprising to hear this from one of Fisher's players. The junior offensive lineman said that he is confident in his own and his teammates' abilities, and he probably should have left it at that. Instead, he added a little extra.

"There will be an upset," Hocker said.

"For sure," Ausbon said. "I've never thought about losing a game this season. I can honestly say it's the first time I've ever done that before."

Inevitably, word about Hocker's comments got back to Fisher. The head coach was short with his response.

Hocker had also better hope that Clemson's defensive lineman do not get wind of his comments, although they probably already have. 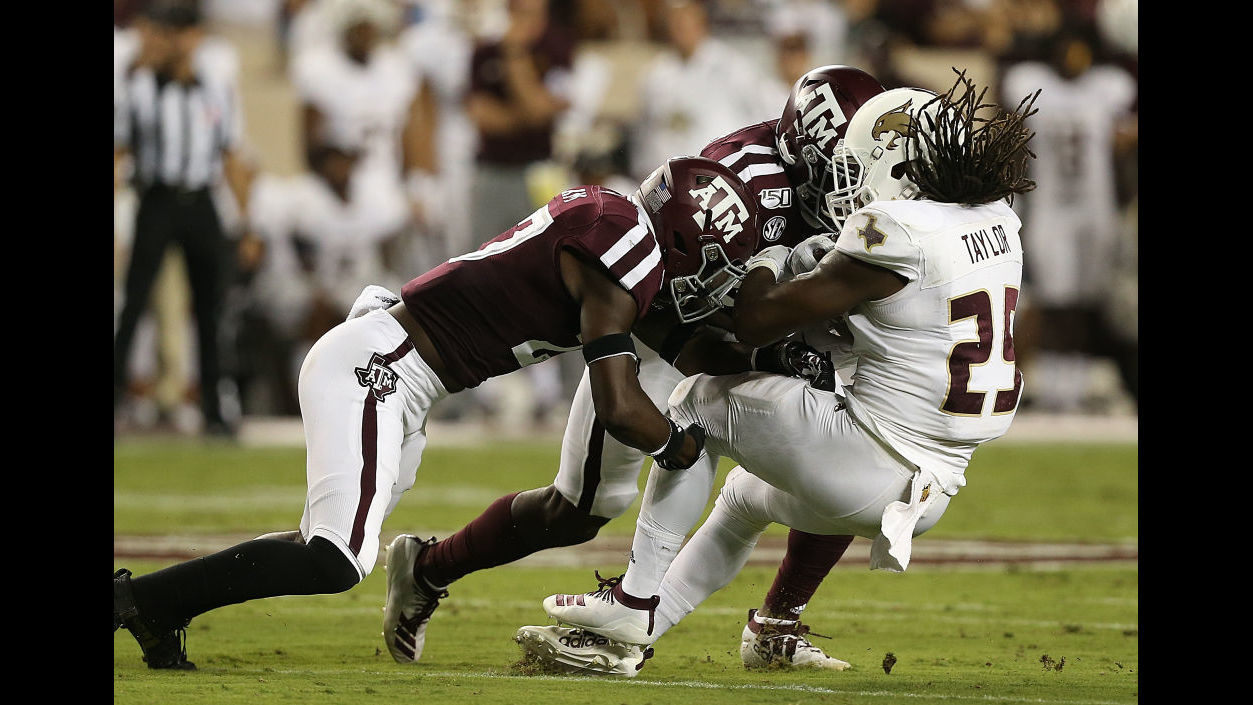 2. Fisher is sticking to his ‘faceless opponent' theory

Aggie fans know by now that Fisher is a man of principals. Whether they are playing Texas State or the defending national champions, he tells his team to approach every game the same way.

"You know who your opponent is," Fisher said. "But you have to control yourself. All the great opponents don't look for external motivation. You've got to have it within yourself. You are who you are in what you do each day. If you're only getting motivated to play certain people, you're never going to win a championship."

Fisher admitted that it is a learned behavior, and it can be hard to grasp. For the most part, his players have bought in.

"[Coach Fisher] says it every week, that the opponent is faceless," sophomore defensive tackle Bobby Brown said. "You've got to work the same, work hard and stay in your book. He says it the same way every week."

3. Texas A&M players are more confident heading into this year's match up

The Aggies came up just short of beating Clemson at Kyle Field last season. However, the competitiveness of the game was a surprise to many, including some of A&M's own players.

"Last year a lot of us weren't really confident, and we didn't really understand what type of team we were at the time," said quarterback Kellen Mond. "We have full confidence going into the game [this year.]"

Ausbon agreed with his quarterback, adding that the team beat themselves a year ago. Some of it came from a lack of preparation, but he said they know how to fix that now. After last year's National Championship game, Ausbon said he, Mond and the wide receivers made a group text and agreed on one thing.

"We texted each other, ‘we're going to be here next year. We're not going to be sitting here watching this,'" Ausbon said. "I can't see myself not doing that." 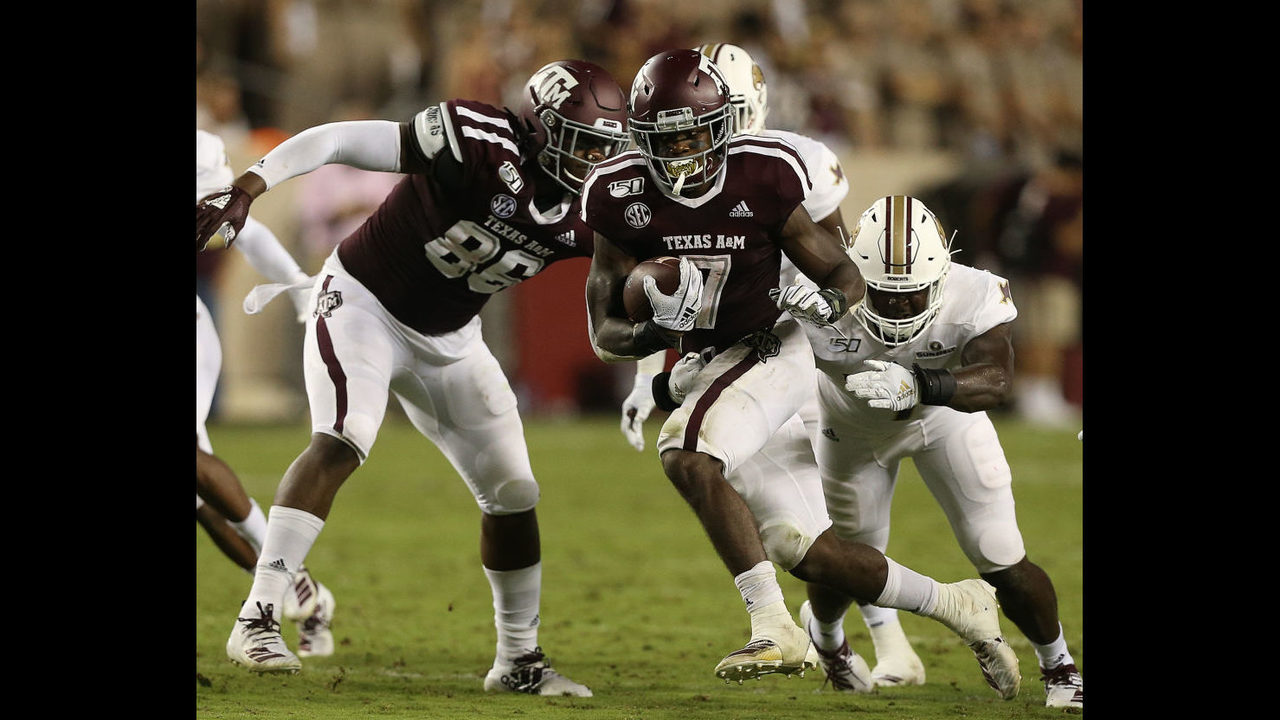 In 2018, the Aggie defense forced only seven interceptions and recorded just four fumble recoveries. A&M ranked well outside of the top-100 in the nation in both categories.

Bobby Brown said that one of Elko's focuses this season is creating more turnovers. It showed in the Aggies' opening game, as their defense snagged four interceptions against Texas State.

"What we're focused on this season is making more plays on the ball," said senior cornerback Roney Elam, who had a one-handed interception against Texas State. "Last year wasn't very good with creating turnovers."

Elko is not just focusing on the secondary, as plenty of turnover opportunities can come from forcing fumbles up front.

"We do a lot more turnover circuits trying to get the ball out," sophomore defensive lineman Tyree Johnson said. "[We] practice techniques tackling while punching the ball out from ball carriers. It's been a hard working season from that aspect."

5. The Aggie defense will have its hands full against a deep Clemson offense

It is no secret what the defending national champions have on offense. A young, talented quarterback in Trevor Lawrence who guided them to a rout over Alabama in the championship game last season, and an experienced, strong running back in Travis Etienne who is coming off a 205-yard, three touchdown opening game. Fisher knows that it does not end there, though.

"They're so challenging because most teams will have one dominant wide out where he's just so explosive," Fisher said. "They've got three, four, and five of those guys. The backs are the same way. It's an extremely tough challenge."

Fisher said his defense will try and create different looks and disguise things against Clemson, but he acknowledged that can leave you out of position at times. He also understands that Lawrence is more than just a pocket passer.

"The thing about Trevor that I think people lose sight of is that he's very athletic," Fisher said. "This guy can run. He can create plays with his legs. They're an extremely dangerous team, and it will be a huge challenge for us no doubt." 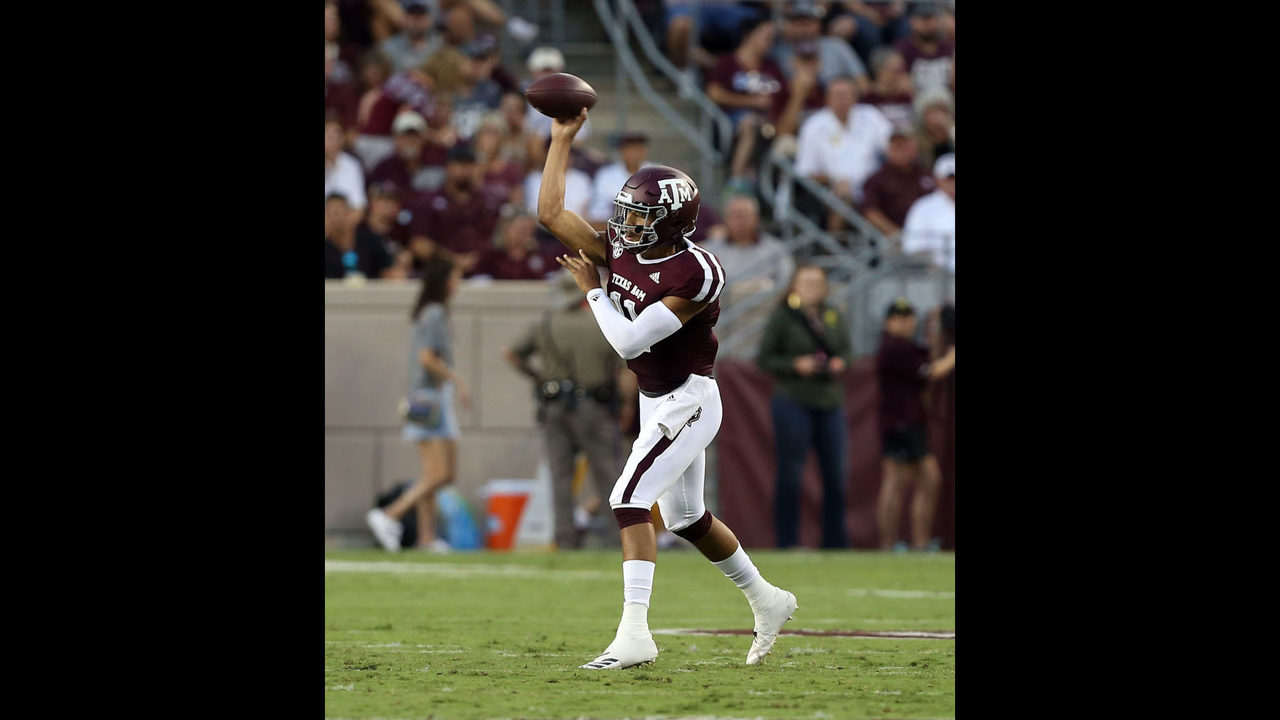 6. Fisher is not putting too much focus on last season's game.

The Aggies' head coach said that there are some things you can take from previous match ups but made the point that teams change and progress every year in college football.

7. Kendrick Rogers is back to full health

The 6-foot-4 wide receiver has been nursing a lower leg injury throughout camp but did manage to get on the field against Texas State, catching one pass for 12 yards. The junior said he is feeling a lot better now.

Aggie fans will remember Rogers' breakout game against Clemson last season when he hauled in seven catches for 120 yards and two touchdowns. Rogers said his goal is to do the same thing this weekend. Keep an eye on No. 13.

8. Cornerback Debione Renfro will miss his second consecutive game due to suspension

Fisher announced last week that Renfro, who started 11 games in each of the last two seasons for the Aggies, was suspended for the season opener due to a violation of team rules. That suspension has extended into this weekend's match up against Clemson. Myles Jones started in his place last week and recorded two interceptions against Texas State. This will be a great opportunity for Jones to show coaches that he can produce versus a tougher Clemson offense in Death Valley. 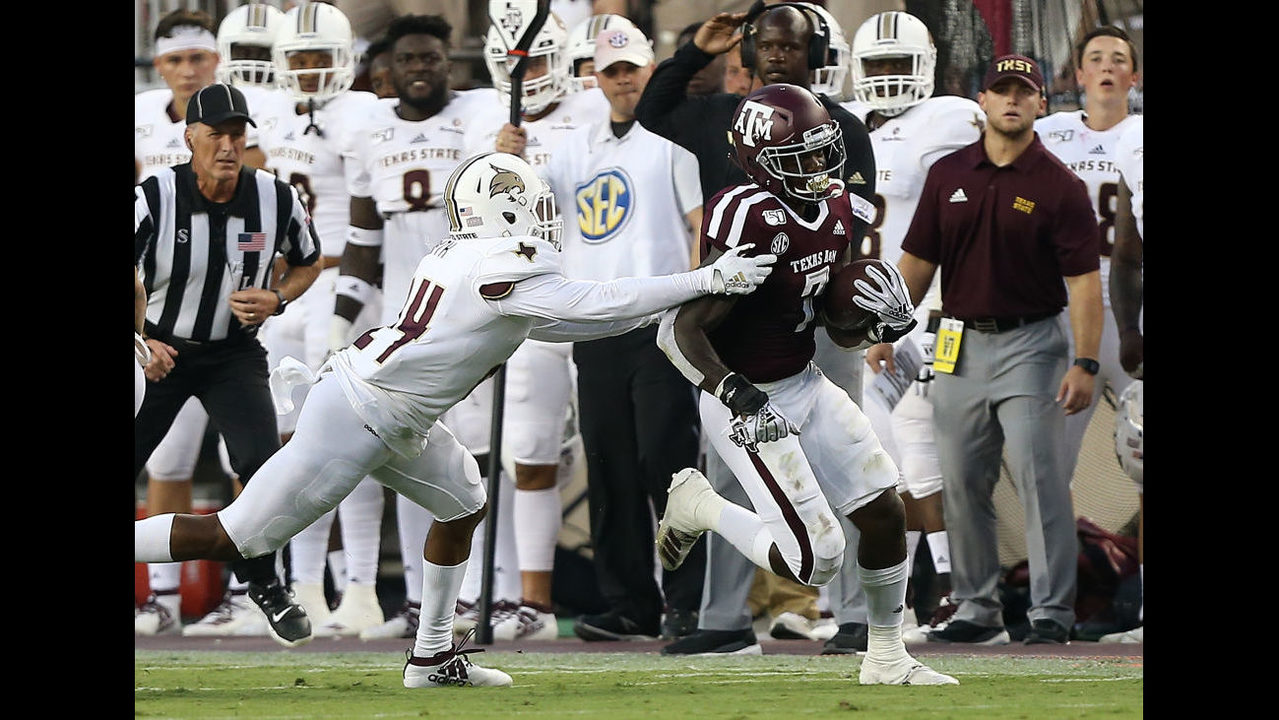 Under Fisher, the Aggies usually travel two days before an away game. Fisher said that is still the plan for now, but they will have an alternative plan if need be.

"When I was in Florida, I did run into a few hurricanes, so I've made some plans around those things before," he added.

Forecasts for Dorian are uncertain, but most tracks show the storm moving up the east coast over the course of the week. The hurricane should have moved on from South Carolina by game day, but it is likely Thursday's travel plans will be impacted.

The Aggie offense threw a wrinkle into the game on Thursday against Texas State, as the 325-pounder entered the game at fullback. One play resulted in a touchdown run for sophomore Jashaun Corbin when Brown attracted the defense on a slant one way, leaving a clear path to the endzone.

Fisher said he was pleased with what he saw and left the door open on using him again.

"I don't believe in hiding anything," Fisher said. "I believe in doing what you do, doing it well and being able to execute it under pressure … He did a very good job, and we have some other guys we can put in there also."

That other guy is rumored to be fellow 300-pound defensive tackle Justin Madubuike.