Craving Girl Scout cookies? 🍪 Here’s how to purchase them in the Houston area

Less than two years after Texas Democrats staged a dramatic showdown to forestall sweeping changes to voting laws, the Legislature is poised to once again revisit how Texas runs elections.

Entering the 2023 legislative session in January, more than 75 bills related to elections or voting had already been prefiled. Both major political parties have drafted bills. Democrats aim to expand voting access. Republicans are focused on enhancing election security.

Because Texas Republicans successfully pushed through a number of their election priorities in the last session, voting-related legislation is unlikely to garner as much attention this year as it did in 2021.

That year’s debate over Texas elections gripped the country as state Republicans pushed an omnibus election bill into law during a special legislative session in 2021. Democratic lawmakers fled the state Capitol and headed to Washington, D.C., in hopes of drawing more national attention to their opposition to the legislation, forcing a nearly six-week shutdown of the Legislature to try to prevent the lower chamber from having enough members to pass bills. 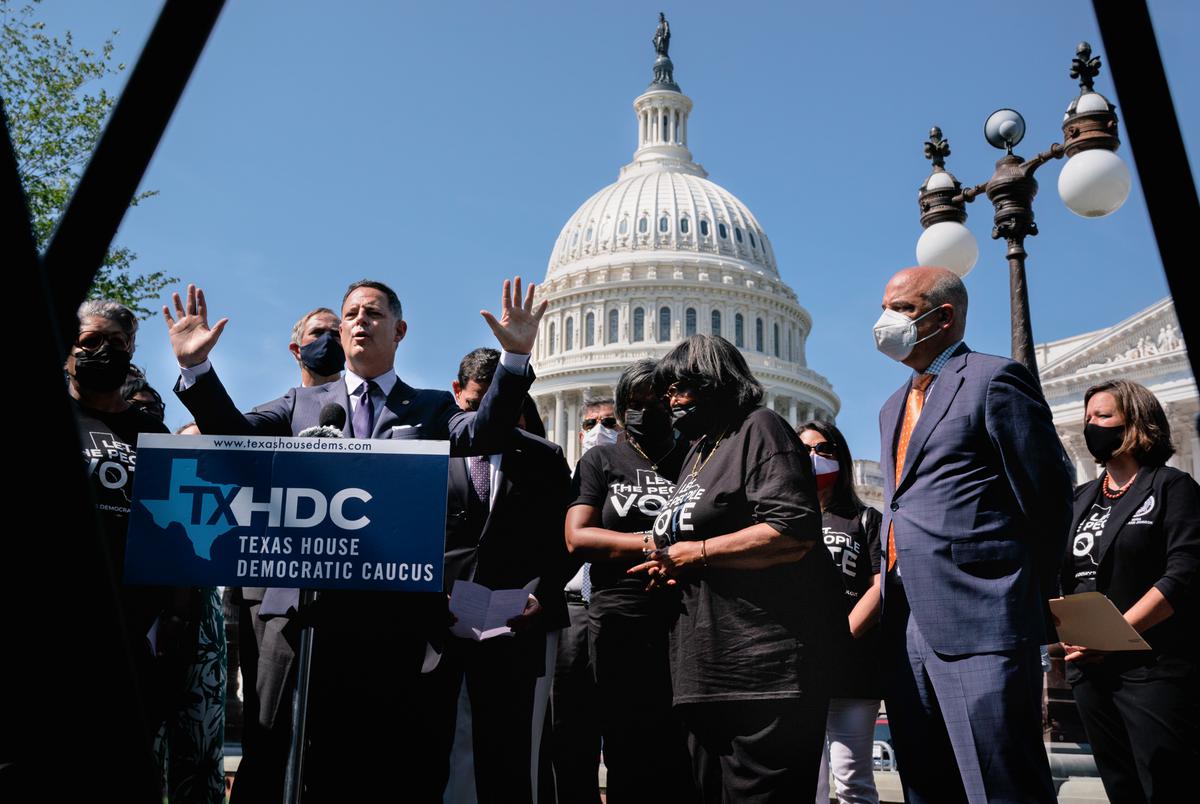 They were ultimately unsuccessful, and the law Gov. Greg Abbott signed contained a slew of voting restrictions and a tightening of election security, including a prohibition on drive-thru and 24-hour voting, plus an expanded role for poll watchers.

Still, Lt. Gov. Dan Patrick has said that tightening election laws is on his list of legislative priorities for this session. Among his goals is changing the penalty for illegal voting from a misdemeanor to a felony after it was downgraded in 2021.

Another Republican proposal would allow the secretary of state to appoint election marshals to investigate violations of election law.

“We need to have election results that we can rely on,” said Rep. David Spiller, R-Jacksboro, who has introduced a bill to enhance the criminal penalty for election crimes. “These laws will ensure that we have safe and secure elections.”

Since 2020, Republicans nationwide — fueled by former President Donald Trump’s unfounded claims about election fraud — have sought to increase barriers to voting. More than 3,600 election-related bills were introduced nationwide following the 2020 election, and 368 of them were enacted, according to the Voting Rights Lab, which tracks such legislation.

Fischer was a key player during the quorum break in 2021 and is known for using his vast knowledge of the legislative process to kill Republican bills.

“House Democrats intend to use every rule in the rulebook, every sentence, every comma, every semicolon of the Texas Constitution to defend the right to vote,” Fischer said.

One bill that has already prompted criticism is a proposal for election marshals filed by state Sen. Paul Bettencourt, R-Houston. The bill appears similar to a law passed in Florida that created an elections crime unit, a move that has been widely criticized by voting rights advocates as ineffective and unnecessarily aggressive.

Police body camera footage published by The Guardian in January showed armed Florida police officers arresting a Miami resident at gunpoint in August after the individual had allegedly voted illegally. He is among at least 19 Floridians who have been arrested for voter fraud since the state created the office to investigate and prosecute election fraud.

At least some of those charged have indicated that they thought they were eligible to vote.

“Despite a huge outlay of resources, that law is not rendering any results,” said Daniel Griffith, senior director of policy for Secure Democracy USA, a nonpartisan organization based in Washington, D.C., that seeks to improve voter access. “There is not pervasive voter fraud, so it’s difficult to understand the need for these law enforcement units.”

In Texas, Bettencourt said election marshals are necessary because of “voter irregularities” in places like Harris County, where some polling locations opened late and reportedly ran out of paper on Election Day in November. In a post-election assessment, Harris County Elections Administrator Clifford Tatum said the investigation into what happened was “inconclusive.” 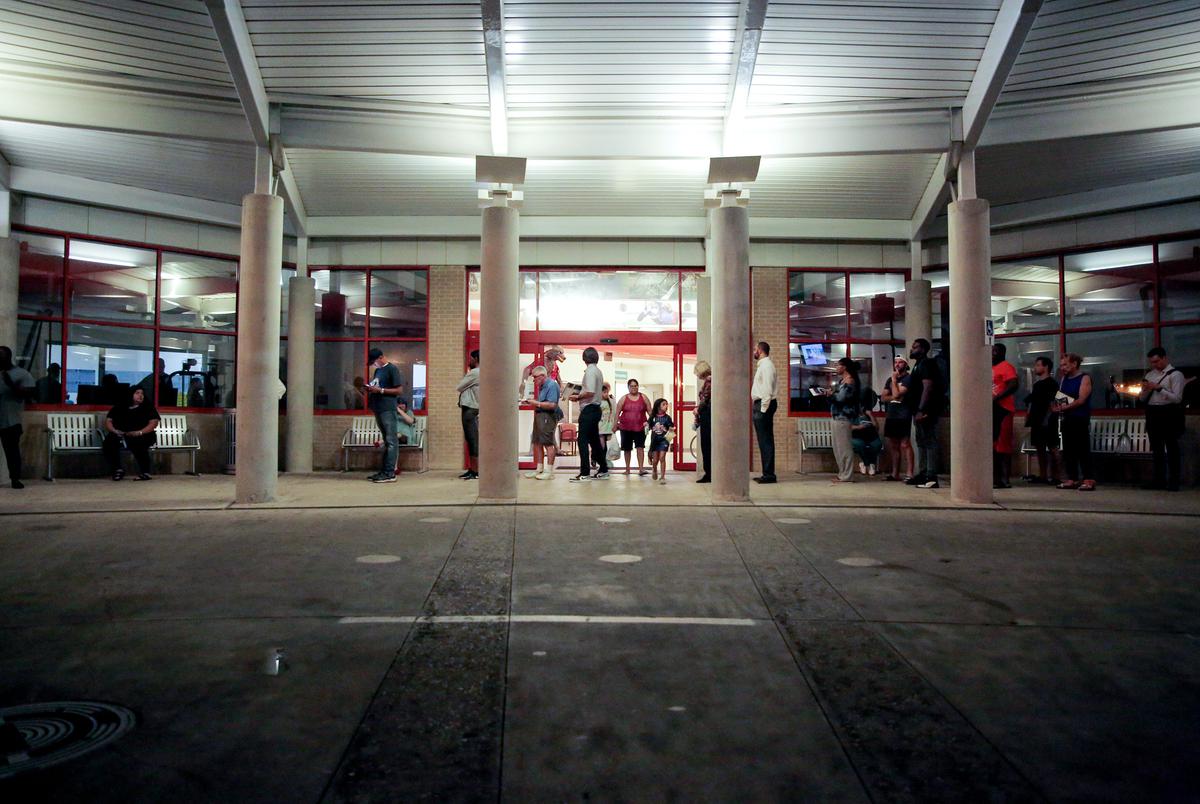 Voters wait in line after 7 p.m. at the Metropolitan Multi-Service Center in Houston on Nov. 8, 2022. Credit: Briana Vargas for the Texas Tribune

Bettencourt called the issues in Harris County “preposterous” and said the bill he filed would provide resources to investigate and immediately rectify administrative problems like paper ballot shortages. He said the bill had nothing to do with Republican claims of voter fraud following Trump’s false claims about the 2020 election.

“This is not about election denying; it’s about voter irregularities,” Bettencourt said. “If the county election administrators aren’t going to follow the law, we need someone whose duty it is to go in and say ‘follow the law.’”

Bettencourt introduced a similar bill during the 2021 legislative session, but it stalled in the House. 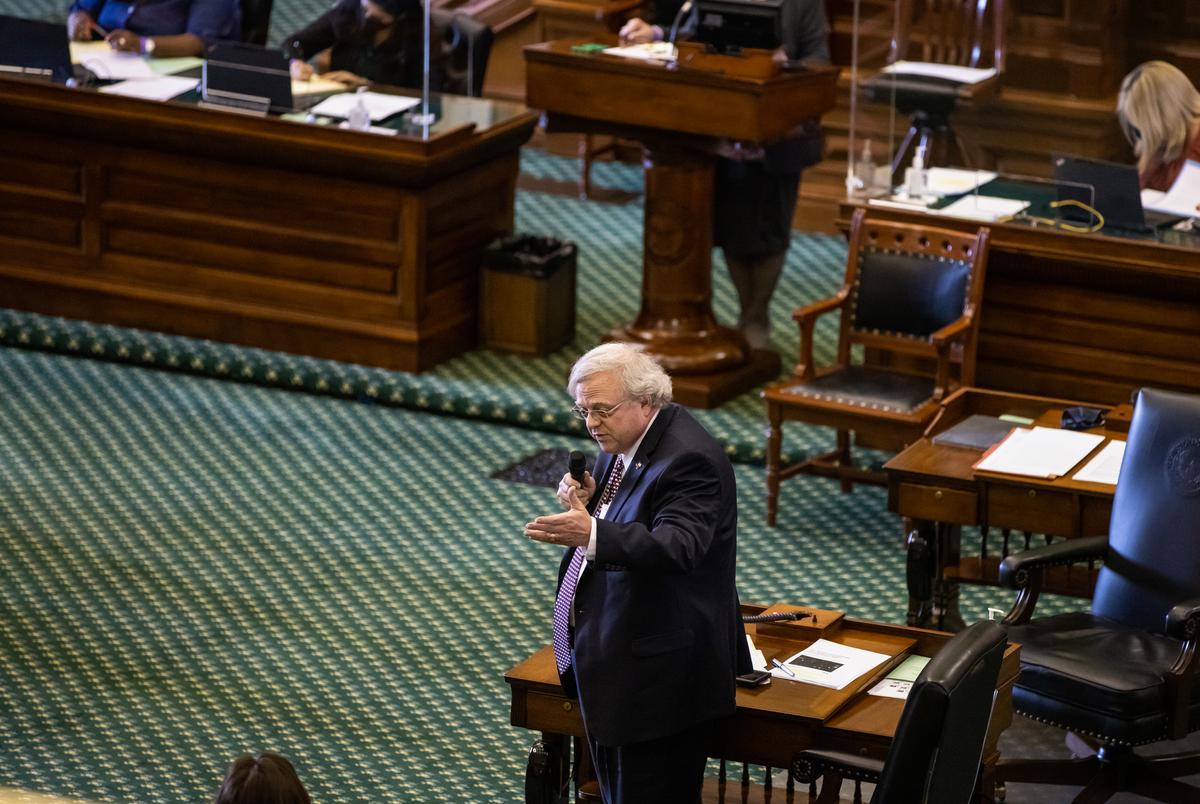 Other bills that have been introduced relate to the punishment for illegally voting. In 2021, lawmakers reduced the charge for illegally voting from a second degree felony to a Class A misdemeanor. A pair of bills from Spiller and state Sen. Bryan Hughes would reinstate the felony charge.

“It’s so that we can have safe and secure elections,” Spiller said. “And it’s nothing new — this has been in place for years and years.”

In one controversial case in 2016, a woman who cast a provisional ballot while on supervised release for a federal conviction was given a five-year prison sentence. At the time, illegal voting was a second-degree state felony. A Texas Court of Criminal Appeals asked a lower appeals court to reconsider the case because the voter, Crystal Mason, did not know she was ineligible to vote. That case is still moving through the court system.

“Looking back over the past few legislative sessions, there have been repeated attempts to find creative ways to prosecute people for what really looks like an honest mistake,” said Anthony Gutierrez, executive director of Common Cause Texas, a nonpartisan organization that advocates for policies such as online voting registration and ending gerrymandering. “There’s no infrastructure to tell people what the process is for when you can vote again [after release from prison] or how you can vote again.”

Another two bills filed in the Texas House of Representatives would expand Texas Attorney General Ken Paxton’s power to prosecute election crimes, something he has prioritized since he took office in 2015. One bill would allow the office to appoint special prosecutors on the cases and the other would penalize local prosecutors who “limit election law enforcement.”

On the opposite side of the aisle, Democrats are advancing bills to support their own priority: expanding voting access. One bill filed in the House would allow Texans to complete their voter registration application online, something the majority of states in the U.S. already permit.

“We all want safe and secure elections, and we have that in Texas,” said Rep. John Bucy III, D-Austin, who filed a bill relating to electronic voter registration. “We just need to figure out how to make them more accessible to Texans.”

Bucy also proposed legislation to improve access to a tracker he helped introduce during the last session for applications for vote by mail. Overall, Bucy said he is hopeful that bills clamping down on election security won’t take center stage during this session.

“These are distraction bills to appease Donald Trump and his faction,” Bucy said. “I don’t think the people of the House will stand for it.”

The deadline to file a bill is March 11, the 60th day of the legislative session.

Disclosure: Common Cause and Secure Democracy have been financial supporters of The Texas Tribune, a nonprofit, nonpartisan news organization that is funded in part by donations from members, foundations and corporate sponsors. Financial supporters play no role in the Tribune's journalism. Find a complete list of them here.