Thursday marks 1,000 days that Texans have been living under Gov. Greg Abbott’s public health disaster proclamation — an era of unprecedented gubernatorial authority for the state’s chief executive, triggered by the March 2020 scramble to contain the COVID-19 pandemic that continues to kill Texans every day.

The entire nation remains under a federal public health emergency at least through the winter season, which experts say could bring another wave of infections as families gather indoors for the holidays, immunity dips or virus variants sidestep older vaccines.

But after more than 92,000 deaths and 8 million COVID-19 cases in Texas in the 32 months since the declaration was made, the state remains one of less than a dozen still under a statewide declared disaster or public health emergency.

The proclamations give executive branches more power to quickly respond to disaster situations that are too urgent to wait for the usual bureaucratic wheels to grind into action.

Using them, he has the ability to suspend any regulatory statute or state agency rule without legislative approval, transfer money between agencies without legislative oversight, commandeer private property and use state and local government resources, evacuate populations and restrict the movement of the people, among other things.

In most states where the proclamations are still active, including Texas, Colorado, Illinois and Delaware, they are set to expire in December unless state leaders renew them.

That’s the decision faced by Abbott on Dec. 18, when his current 30-day order expires and he must either let it lapse or renew it until mid-January — a week after the start of the Legislature, for which at least one bill has already been filed to weaken the governor’s powers during disasters. 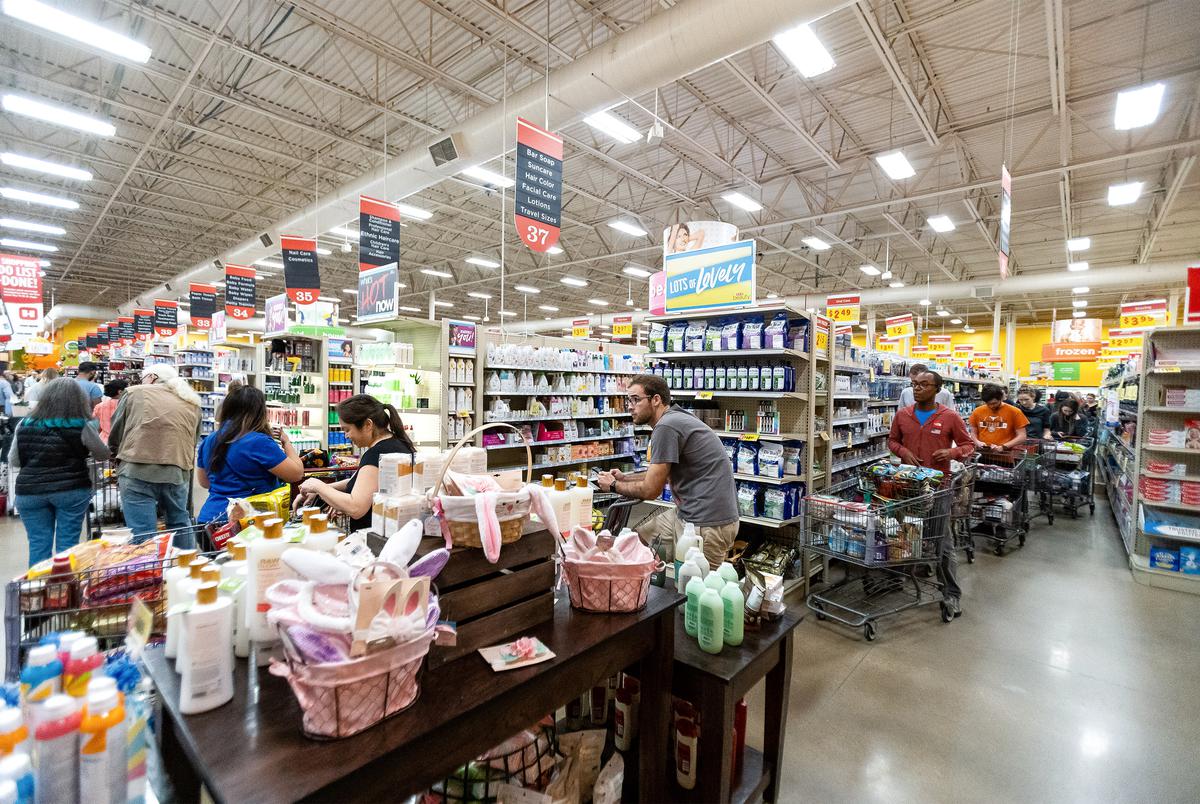 A long line forms at an H-E-B grocery store in Austin on March 13, 2020. Credit: Jordan Vonderhaar for the Texas Tribune 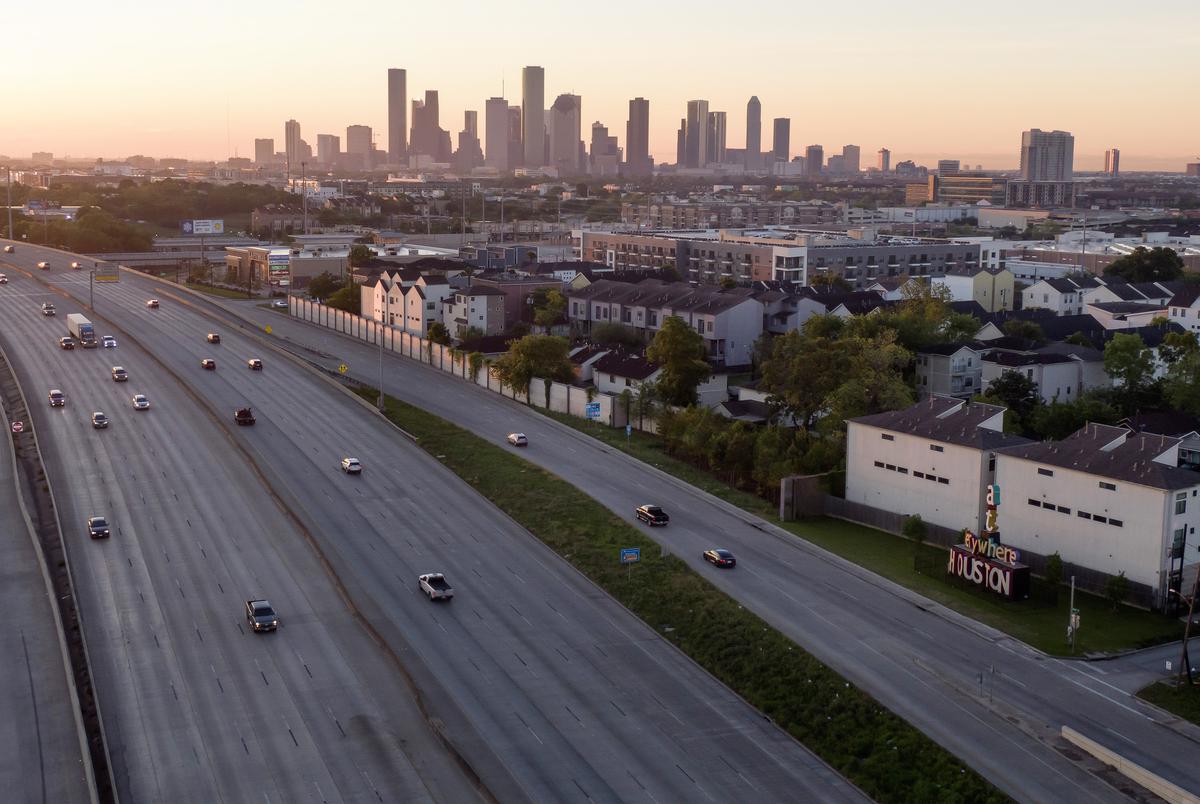 An almost empty freeway in Houston on April 1, 2020. Credit: Michael Stravato for The Texas Tribune

First: A long line forms at an H-E-B grocery store in Austin on March 13, 2020. Last: An almost empty freeway in Houston on April 1, 2020. Credit: Jordan Vonderhaar and Michael Stravato for The Texas Tribune

“Declaring a state of disaster will facilitate and expedite the use and deployment of resources to enhance preparedness and response,” the proclamation read.

At the time, 80 Texans had confirmed or suspected cases of COVID-19. No deaths had been reported yet.

Under the public health disaster order, Abbott has made several unilateral decisions in response to the pandemic.

He extended the length of early voting in 2020 to help thin out Election Day crowds. He enacted mask mandates; directed state agencies to offer work-from-home options to employees; closed bars, gyms, nail salons and other businesses during one of the early surges; banned elective surgeries; limited long-term care visits; and capped venue occupancy until later removing those limits and banning cities from enacting them. 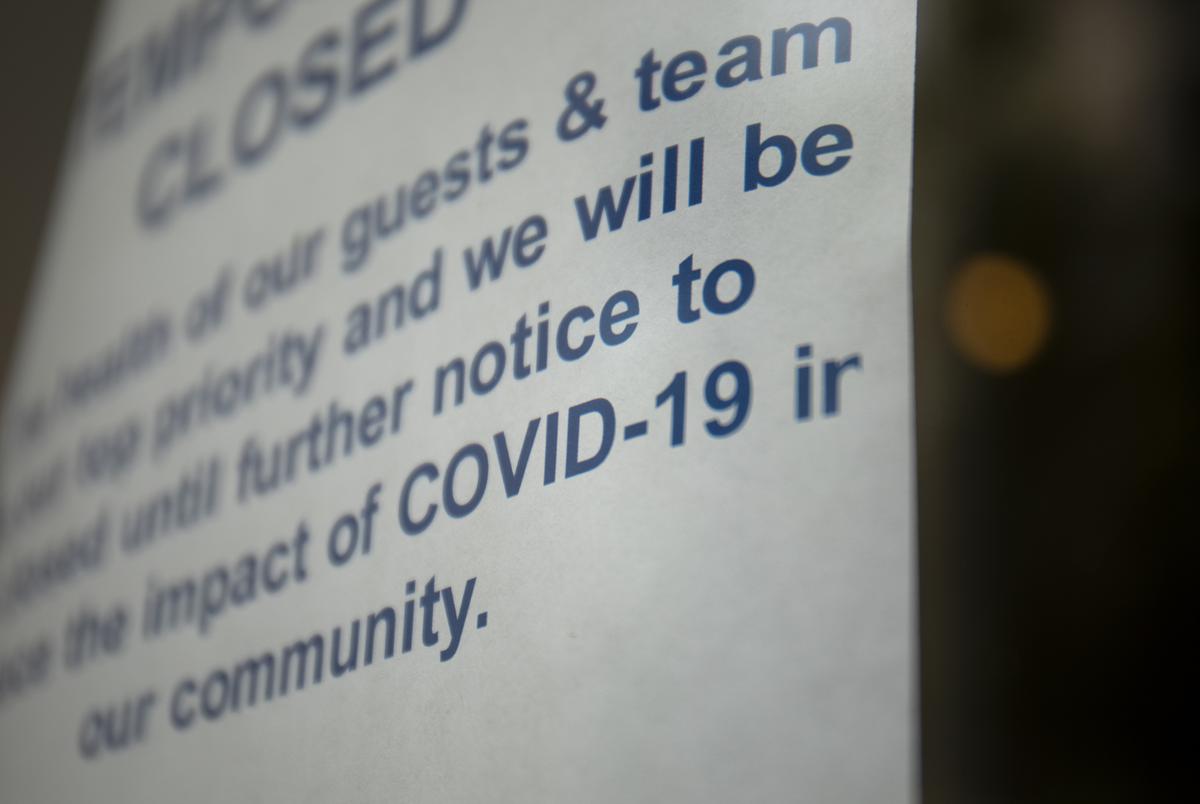 In his entire tenure as governor, Abbott has issued 42 executive orders. Most of them — 35 so far — are COVID-related and carry the weight of law. Only seven of them, none of which were binding, came in the four years before the pandemic hit.

The landslide of executive orders was indeed a show of power, but it was also reflective of the knowledge void surrounding the pandemic as authorities tried to match policy to the ebb and flow of the virus — its spread, what was known about it, and the ever-changing economic and social landscape that emerged because of it, said Randall Erben, a law professor at the University of Texas at Austin and a former assistant secretary of state who served as legislative director for Abbott during his first year as governor. 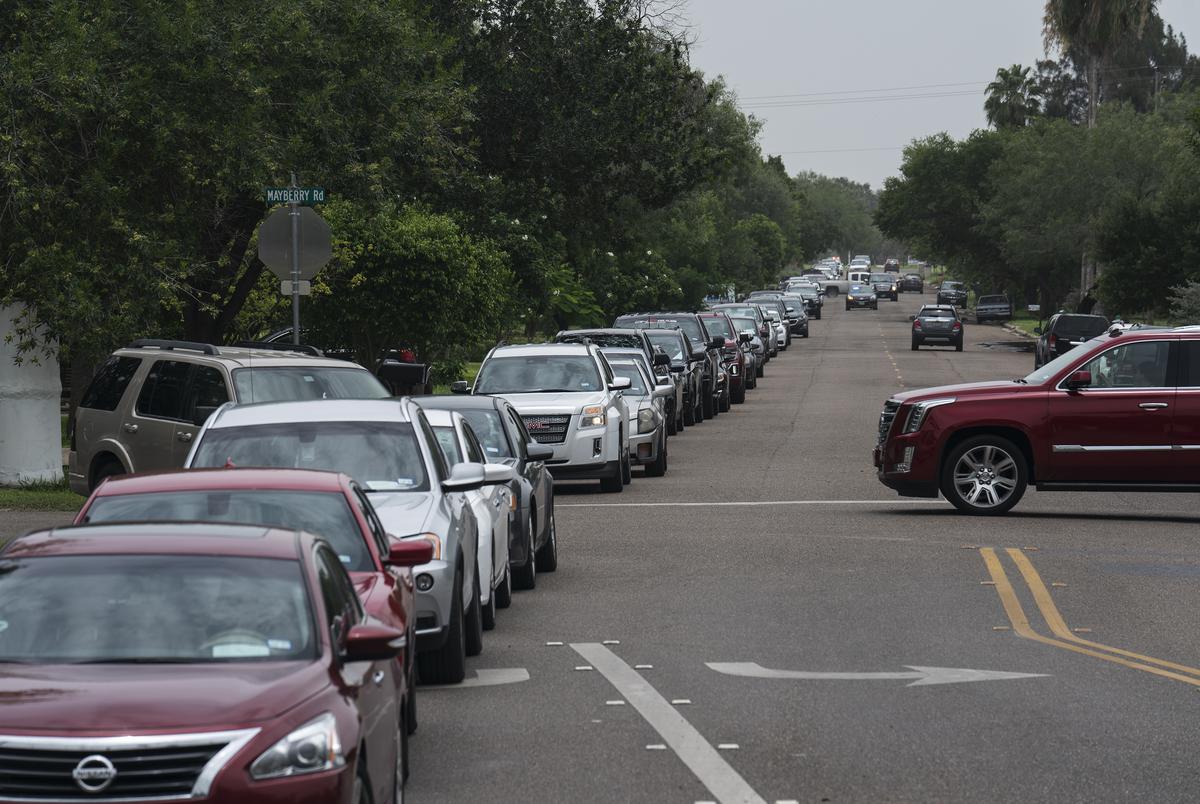 People wait in their vehicles to get tested for COVID-19 at a temporary testing site in Mission on June 26, 2020. Credit: Verónica G. Cárdenas for The T

“We have a playbook for hurricanes,” Erben said. “With COVID, there was no playbook. … And as the surges came and went, and the public health threat increased and waned, those orders kind of reflected that.”

“Gov. Abbott will not let any government trample Texans’ right to choose for themselves or their children whether they will wear masks, open their businesses or get vaccinated,” she said.

Erben said he doesn’t see how Abbott’s ability to govern or to respond to the pandemic would benefit from ending the proclamation — and lawmakers don’t seem particularly motivated to fight with Abbott over it.

Texas is under five disaster declarations: the COVID-19 disaster, as well as declarations triggered by the drought, the school shooting in Uvalde, the situation at the Texas-Mexico border and wildfires.

If the Texas Legislature had a problem with disaster declarations and Abbott’s behavior under them, it could have rebuked him with legislation in 2021 that would have curtailed his powers in disasters, or it could have required legislative action to declare a disaster or even ended the proclamation.

No such bills made it to his desk.

In the Texas Disaster Act of 1975, passed by a Democratic majority in the House and Senate and signed by a Democratic governor, the disaster declaration was designed so that the chief executive could take action “more expeditiously, efficiently and effectively on a unilateral basis than the Legislature could even if it were in session,” Erben said.

“Will the Legislature come back in and try to limit the powers of the governor during a disaster, or will they try to terminate the disaster? I doubt it,” Erben said. “It’s a Republican Legislature, they generally agree with most of the things the governor has done during this, at least the current state of the orders [banning mask and vaccine mandates]. And even if they did, what I think would happen is that Abbott would just veto the legislation, reissue the proclamation.”

Some Abbott critics say the time has come, however, for the declaration to die, that the pandemic no longer is considered an emergency given that rates have dropped and stayed low in recent months — and that Abbott is simply hanging on to his outsized executive authority for as long as he can.

Michael Quinn Sullivan, a conservative and frequent critic of Abbott’s use of the disaster declaration, called the reasons given behind the continuance of the declaration “nonsensical” and chided “defenders of the status quo” in a Twitter thread on Wednesday.

“He [Abbott] doesn’t explain why he has continued in 30-day increments to declare an emergency no one sees here, or in 39 other states, or what would trigger an ‘end’ to the emergency he perceives,” wrote Sullivan, who publishes the conservative Texas Scorecard.

Several states have governors endowed with more executive authority than in Texas, some of them on par with what Abbott is allowed to do only under a disaster declaration.

While Abbott is limited, for example, in what he can do with Texas money without legislative oversight under normal circumstances, he can shift billions of dollars without public hearings under a disaster order. Meanwhile, the governor of West Virginia has broad constitutional budgeting authority, and the governor of Illinois can add amendments into budget bills.

In Texas, Abbott doesn’t have the constitutional authority to tell agencies what to do when there’s no disaster declaration — although their governing boards are filled with his appointments, so he does have strong influence. But the New Jersey governor holds that state’s only statewide elected office and so has enormous power over the funding, policies and leadership of state agencies such as the attorney general and the state comptroller.

A winter COVID-19 wave, as scientists predict could be on the way, might necessitate — or at least make a strong case for — extending the disaster to allow Abbott to continue making quick decisions as needed if the crisis elevates like it did last winter, said Mark P. Jones, a political science fellow at Rice University in Houston.

Confirmed cases and hospitalizations in Texas for COVID-19 are climbing again after a lull over the summer, increasing statewide from about 1,000 Texans hospitalized with COVID-19 one month ago to about 1,600 on Wednesday, according to the Texas Department of State Health Services.

If the numbers continue to climb, continuing the disaster declaration would likely be an even easier sell, offering some cover from those who say Abbott is using it only to bolster the historically weak powers of the governor’s office, Jones said.

But it’s not all about politics, either. The declaration has also had some social benefits, allowing the governor and the Texas Health and Human Services Commission to extend emergency food assistance for needy families without additional oversight, among other actions, advocates say.

Those payments, administered through the Supplemental Nutrition Assistance Program, were bolstered during the pandemic under action made possible by the disaster declaration, “and we are very grateful for it,” said Rachel Cooper, director of health and food justice at Every Texan, a progressive think tank.

“If the state declaration ends, there would need to be some form of replacement declaration like a narrower public health emergency to keep the extra SNAP funds going to families,” Cooper said.

Disclosure: Every Texan, Rice University and the University of Texas at Austin have been financial supporters of The Texas Tribune, a nonprofit, nonpartisan news organization that is funded in part by donations from members, foundations and corporate sponsors. Financial supporters play no role in the Tribune’s journalism. Find a complete list of them here.

Clarification, Dec. 9, 2022: An earlier version of this story refers to 8 million confirmed COVID-19 cases in Texas based on data from the New York Times. That number includes 6.4 million confirmed and 1.6 million probable cases, according to the Texas Department of State Health Services.