The Houston Police Department holds a news conference to update their investigation into the deadly shooting of Migos rapper, Takeoff

What to expect this December

TRAFFIC ALERT: Westbound lanes on I-610 at Wayside shut down due to overturned 18-wheeler

U.S. House Minority Leader Kevin McCarthy called on Homeland Security Secretary Alejandro Mayorkas on Tuesday to resign over the administration’s border policy, promising to launch investigations next year that could culminate in impeachment.

“We will use the power of the purse and the power of subpoena. Let me be clear: Those responsible for this disaster will be held accountable,” McCarthy said at a news conference in El Paso. “If Secretary Mayorkas does not resign, House Republicans will investigate every order, every action and every failure to determine whether we can begin impeachment inquiries.”

Republicans have made border security one of their leading attack points on Democrats and the Biden administration — which will only increase next year with Republicans set to take control of the House. U.S. Border Patrol recorded its highest ever number of migrant arrests on the southwestern border last month, with nearly 2.4 million encounters for the fiscal year.

Speaking after he toured the border with members of the Texas Republican delegation, McCarthy also said he would have congressional hearings on border security on the border next year if he becomes House speaker. Republicans nominated McCarthy for the speakership last week, but the final vote isn’t until January.

In a statement Tuesday, the Department of Homeland Security said Mayorkas does not intend to resign and is proud to advance the department’s mission.

“The Department will continue our work to enforce our laws and secure our border, while building a safe, orderly, and humane immigration system,” the statement said. “Members of Congress can do better than point the finger at someone else; they should come to the table and work on solutions for our broken system and outdated laws, which have not been overhauled in over 40 years.”

Having congressional hearings outside of Washington isn’t without precedent. Members occasionally schedule field hearings during “state work periods” when members are in their home districts, and Democrats have scheduled field hearings this year to highlight environmental and infrastructure issues. But the use of field hearings for border issues increases the visibility of Republicans’ needling of Democrats on a problem that even many Democrats feel their own party has not adequately confronted.

McCarthy’s speakership bid has also taken a challenge from the Republican conference’s right flank, further incentivizing him to intensify his message. McCarthy said Tuesday that “we never do impeachment for political purposes” and that any impeachment would be subject to a thorough investigation. 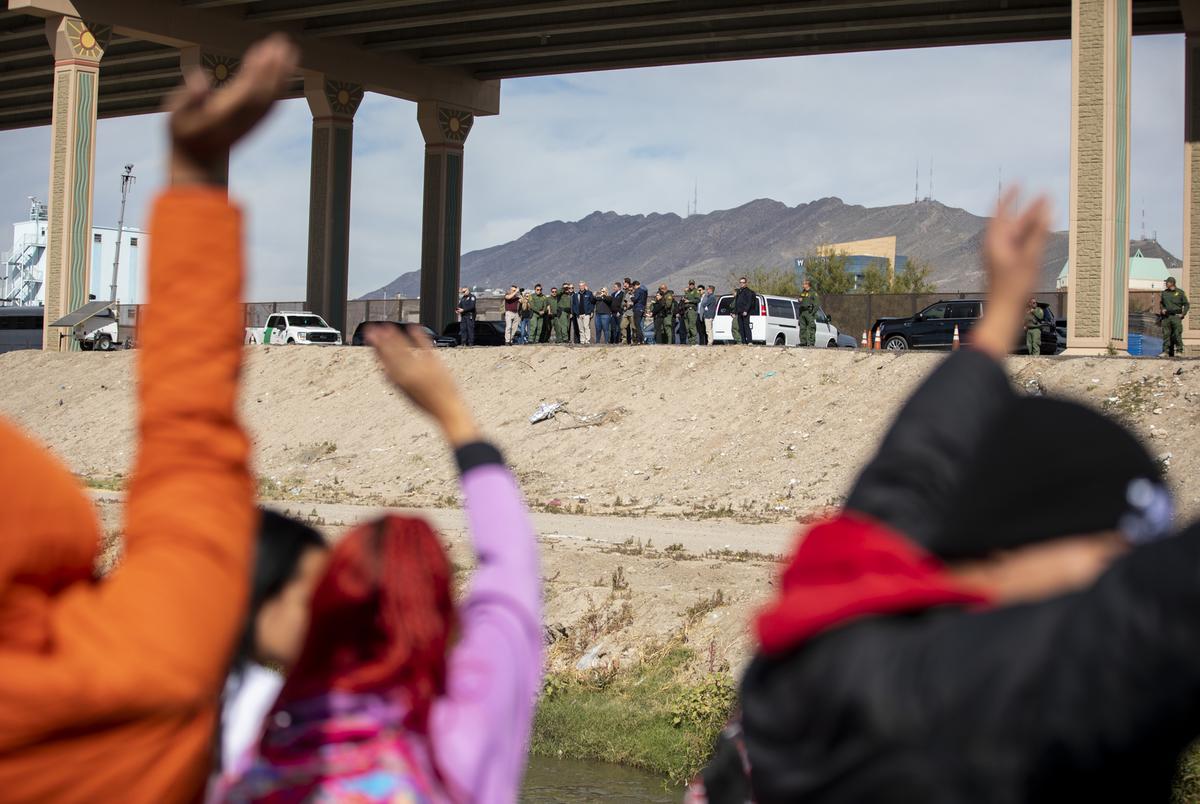 A group of migrants, many staying in tents right along the river in Ciudad Juárez, waved their arms at McCarthy, some shouting, “let us in,” or “we want to work.” Credit: Ivan Pierre Aguirre for The Texas Tribune 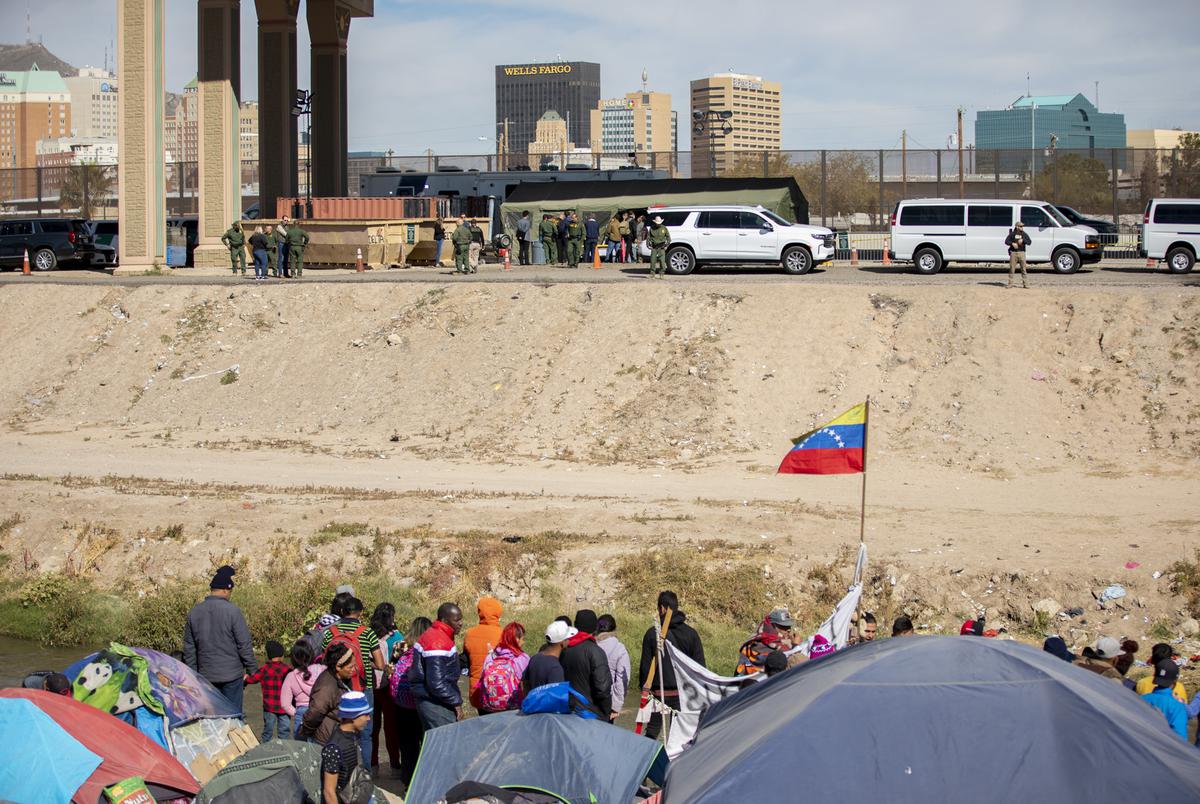 Migrants standing near the Rio Grande in Juárez, Mexico look on as Kevin McCarthy, minority leader of the U.S. House, tours the makeshift migrant processing center near the Rio Grande on Tuesday, Nov. 22, 2022, in El Paso. Credit: Ivan Pierre Aguirre for The Texas Tribune

A group of migrants, many staying in tents right along the river in Ciudad Juárez, waved their arms at McCarthy, some shouting, “let us in,” or “we want to work.” Credit: Ivan Pierre Aguirre for The Texas Tribune

Most of the visit was closed to the media. But at one point early in the afternoon, McCarthy could be seen from across the border under a highway overpass looking across the Rio Grande. He was accompanied by Border Patrol agents and people snapping pictures on their cellphones. On the other side of the river, a group of migrants, many staying in tents along the river, waved their arms at him. Some shouted, “Let us in” or “We want to work.”

One migrant present, Abelardo Chacón, had spent the past month and a half in Ciudad Juárez . He said he crossed over into Texas in hopes of traveling to Miami but that they “threw me out.” He said he didn’t know what to think of McCarthy’s visit because “I honestly don’t know who he is.”

“But if he came, God willing he came for a good reason,” Chacón said. “To look for a solution — to at least let enter those who truly want to work and want to do things right.”

Texas border Republicans have been calling for increased resources for Border Patrol agents, who they say are overworked and suffering from low morale. Crenshaw is making a bid to be the chair of the House Homeland Security Committee next year, which would have oversight on border security issues.

Senate Republicans made a similar visit to the border in March, with Sens. John Thune and John Barrasso, the second- and third-ranking Republicans, joining Cruz and several other members. The senators wrote to President Joe Biden afterward imploring him to advance policies to secure the border.

Republicans are calling on the administration to reimplement a controversial policy under President Donald Trump that forced asylum-seekers to wait out their cases in Mexico. Asylum-seekers currently can enter the United States to wait for their court hearings, which can be years after their first entry. Several Republican attorneys general also pushed a federal judge Monday to maintain Title 42, a Trump-era measure that lets the government expel migrants in order to contain the spread of COVID-19. A court order is on track to lift Title 42 later next month.

“Now that Title 42 may end, we’re bracing for a tsunami,” McCarthy said Tuesday.

Texas Democrats dismissed Tuesday’s border tour as fear-mongering and xenophobia, with little in the way of effective policy proposals.

“It’s a broken record,” U.S. Rep. Sylvia Garcia, D-Houston, said in an interview Tuesday. “They go down to the border. They dress in their camouflage suits. They take pictures with some of the Guardsmen that [Gov. Greg] Abbott has there. It’s all photo ops. The time has passed for photo ops and visits. The time to act is now.”

Garcia emphasized the need to reform immigration policy to allow more legal pathways for immigration and to streamline asylum case hearings so applicants don’t wait in legal limbo for years. Both are goals that a handful of border Republicans have said they would be willing to work across the aisle on. Gonzales, the San Antonio Republican, said Tuesday he has called on the Biden administration to find bipartisan border policy and invited Biden to visit the border.

Garcia also pushed for comprehensive reform to allow recipients of Deferred Action for Childhood Arrivals to remain in the country. In March 2021, the U.S. House passed the Dream and Promise Act, which would grant permanent resident status to many DACA recipients. The Senate has only a few legislative weeks left in the current congressional session to pass the bill, and members of the Congressional Hispanic Caucus are lobbying hard for the upper chamber to prioritize it.

Senate Democratic leadership expressed optimism about passing the bill, with Senate Majority Whip Dick Durbin, D-Illinois, telling reporters last week that at least four Republicans were likely to cross over and vote for the bill. Democrats need 10 Republicans to overcome the filibuster and vote to pass the bill.