You can watch Houston Life live at 1:00 p.m. Monday through Friday. If you miss today's episode, you can catch it at 8:00 p.m. or the next morning at 8:00 a.m. on the KPRC 2+ livestream. You'll find KPRC 2+ on your streaming device, on Click2Houston.com and on Click2Houston app.

MCALLEN — For the first time in its history, Texas’ 15th Congressional District will be represented by a Republican.

Monica De La Cruz won her bid to represent the district Tuesday in the traditionally Democratic stronghold of South Texas, according to Decision Desk HQ.

In the most competitive congressional race in the state, De La Cruz pushed ahead to victory, riding the momentum of a better-than-expected run in 2020 and a wave of outside funding from national Republicans eager to gain new ground in the region.

“I want it to be known that my victory is not just a win for Republicans,” De La Cruz said at her election party in McAllen. “It is a win for all of south Texas.”

De La Cruz defeated Democrat Michelle Vallejo, a political newcomer who ran on a platform of progressive social policy and close family ties to the region. Vallejo had run an aggressive ground operation and was able to rally handsome donations from across the state. But she faced a death knell after less-than-favorable forecasts led national Democrats to dedicate their resources to protecting incumbents and supporting more promising races.

From the get-go, the table had been set increasingly in Republicans’ favor. New district lines drawn after the 2020 census included more Republican-leaning areas in the northern part of the district, which stretches from the eastern exurbs of San Antonio down to McAllen’s border with Mexico. The district voted for President Joe Biden with a 1.9-percentage-point margin in 2020 but would have voted for former President Donald Trump with a 2.8-percentage-point margin under the new district barriers.

Republicans also flooded the region with cash, banking on gaining new ground in the Democratic stronghold. De La Cruz raked in over $4.3 million — the most ever spent by the party on the 15th District — as of mid-October, much of it coming from out-of-state donors eager to take control of the House. Vallejo, on the other hand, brought in just under half that much. 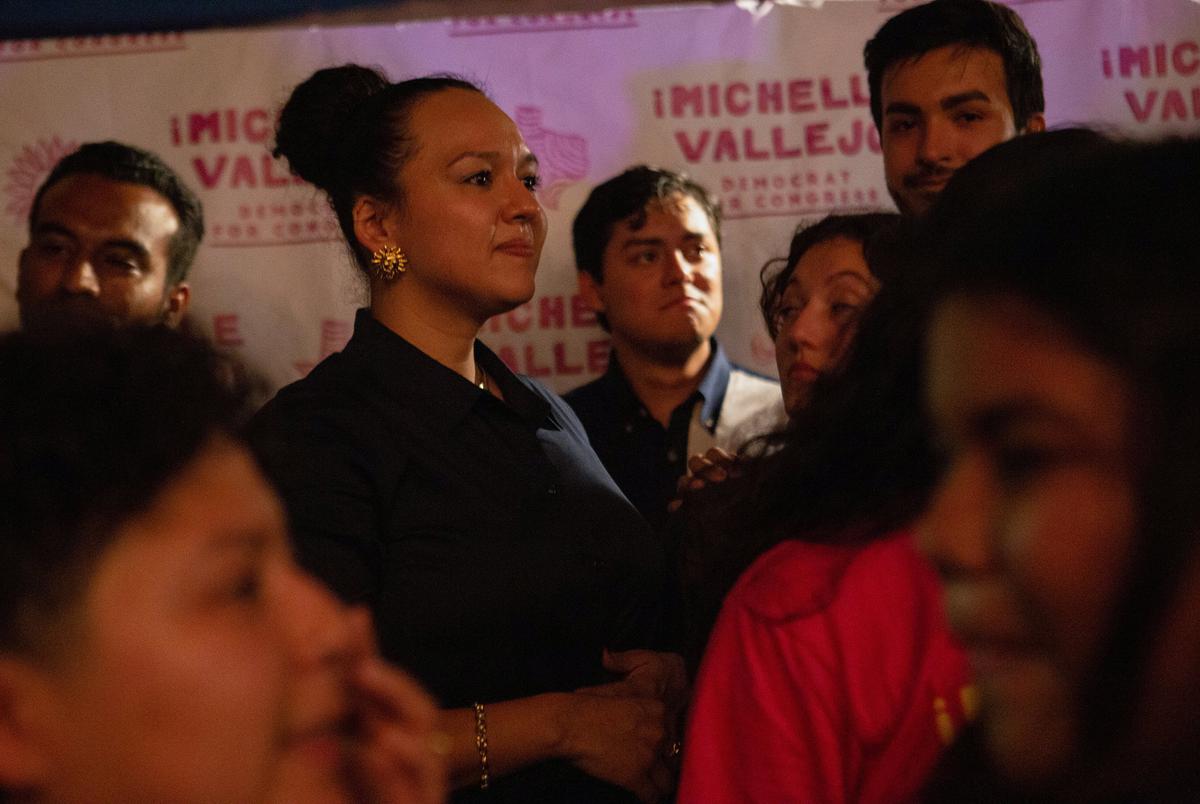 De La Cruz was in many ways a trendsetter in the Republican effort in South Texas. In 2020, the insurance-agent-turned-Republican lost to U.S. Rep. Vicente Gonzalez, D-McAllen, by less than 3 percentage points despite the Democrat spending well over twice as much money. Her run inspired fellow Republican Latina candidates Cassy Garcia and Mayra Flores to run in the neighboring 28th and 34th congressional districts this year, respectively, banding together as “the Triple Threat” and the “Trio Grande Valley.”

“I am blessed and humbled that the people in our community chose this change,” De La Cruz told The Texas Tribune after her election party. “You have to remember that I started this journey in 2020 and it’s been three years of hard work.”

All three races received precedent-setting cash infusions from out of state. That was not the case for the Democrats.

Biden’s party was long expected to lose its delicate control of the U.S. House as inflation, gas prices and erratic messaging drove down Democrats’ approval ratings. National Democrats were forced to prioritize their resources, focusing money on protecting incumbents in competitive races and leaving newcomers and candidates with modest potential to fend for themselves.

The 15th race was no exception. The Democratic Congressional Campaign Committee and the Speaker Nancy Pelosi-aligned House Majority PAC declined to spend money to air TV ads for Vallejo in the critical hours of the race. This was despite continued funding going toward Democratic races in the neighboring 28th District, where incumbent Rep. Henry Cuellar was fending off Garcia, and the 34th District, where Gonzalez moved to run against fellow incumbent Flores.

Texas Democrats were apoplectic over the lack of funding for Vallejo — a disciplined, promising candidate with deep family ties in the region who ran on a message of progressive policy while maintaining outreach to more moderate voters.

The DCCC rebuffed the notion that it neglected its responsibilities in the region. The group spent over $7 million in South Texas this cycle and set up shop in the area as early as last spring. Vallejo, for her part, said in an interview last week that a loss would be the consequence of the new district barriers creating a greater Republican advantage.

Fellow Democrats still came to Vallejo’s aid in the final stretch of the race, with progressive standard-bearer U.S. Sen. Bernie Sanders, I-Vermont, campaigning with Vallejo just over a week before Election Day. U.S. Reps. Veronica Escobar, D-El Paso, and Sylvia Garcia, D-Houston, also joined Vallejo to campaign in the valley two weeks before the election. Escobar and Garcia are the first two Latina congresswomen from Texas, and Vallejo has cited both as mentors and confidantes.

And there were numbers to give Democrats optimism in the final stretch. Vallejo managed to barely outraise De La Cruz in the first 20 days of October $374,000 to $342,000. Polls also showed the two neck and neck, despite the unequal pocket books. Despite Republicans saying their platform would better appeal to socially conservative Latino voters, Vallejo had a slight advantage among Latino voters in the weeks before Election Day, according to polling by Lake Research Partners.

Sitting Texas Democrats felt neglecting a promising candidate in a border district was also a serious policy miscalculation, particularly as Republicans increasingly use immigration and border security as a cudgel against Democrats. Republicans have signaled for weeks their intent to rake the Biden administration over the coals for its border policy, including calls to impeach Homeland Security Secretary Alejandro Mayorkas.

De La Cruz ran on a border platform echoing the rhetoric of the Trump administration, including the completion of a wall on the Mexican border and ending “catch and release.” She also called for migrants to have to wait in Mexico as they seek asylum in the United States.

“I want to make sure that we have as many Democratic members from the border as possible, because if we do not, then what we will have are members of Congress from the border. applauding some of the cruelest immigration policies of our lifetime,” Escobar said.

The 15th District is one steeped in generations of Democratic power. Its inaugural representative was Rep. John Nance Garner, commonly known as “Cactus Jack,” who went on to become speaker of the House and vice president under President Franklin Delano Roosevelt — one of only two people to have ever held both offices. Rep. Lloyd Bentsen, who represented the district from 1948-55, went on to become a four-term U.S. senator and U.S. Treasury secretary. Rep. Kika de la Garza held the seat for over three decades including 14 years chairing the House Agriculture Committee.

Regardless of the outcome Tuesday night, the winner would have made history by being the first woman elected to represent the district and the fourth-ever Latina congresswoman from Texas.