U.S. Sen. Bernie Sanders, I-Vt., toured Texas this weekend looking to energize progressive voters with days to go until the midterm election, including in a key congressional race in South Texas.

The two-time Democratic presidential candidate visited Central Texas on Saturday and then headed south Sunday to the Rio Grande Valley, where he held a rally with Michelle Vallejo, who is running for the 15th Congressional District. It is an open seat that Republicans are eager to flip — and one where national Democrats have declined to go all in, sparking frustration inside the party.

“The vote right here in this district could determine which party controls the U.S. House of Representatives, and I think the choice is clear,” Sanders said at the McAllen rally with Vallejo. “The choice is whether we give more tax breaks to billionaires and cut Social Security, Medicare, Medicaid, education and other needed programs — or whether we stand up for the working class of this country. Michelle Vallejo is on the right side.”

Republicans are targeting the 15th District and two others in South Texas, hoping to capitalize on President Joe Biden’s underperformance there in 2020 and make new inroads with Hispanic voters. Vallejo narrowly defeated a more moderate Democrat in the primary runoff and now faces Republican Monica De La Cruz, who ran a surprisingly close race in the 15th District in 2020, prior to redistricting.

Sanders’ visit to Texas came about halfway through the early-voting period — and it came eight days after former President Donald Trump made his own visit to South Texas, hoping to juice turnout for the congressional races. De La Cruz, who has Trump’s endorsement, did not attend the rally, instead addressing the crowd through a brief video message.

Some prominent in-state Democrats have been disappointed with national outside groups that have not done any serious TV spending in the 15th District, instead prioritizing the two other South Texas districts. That has left Vallejo to run as a decisive underdog in a district that Republicans already redrew to be more favorable to them.

“No matter what people outside of South Texas want to think or claim that we don’t have this win,” Vallejo said at the rally, “I know that we are on our path to victory, and we’re gonna win this race on Nov. 8.”

In her speech, Vallejo continued to embrace Sanders’ signature proposal — the single-payer health care model known as Medicare for All — saying she is “running to fight for Medicare for All because our families should not be forced to go to Mexico to get the medical care they deserve.” And Vallejo knocked De La Cruz as an “extremist,” who, among other things, wants to ban abortion without exceptions for rape or incest. De La Cruz has said she supports abortion “only to save the life of the mother.”

Before the Sanders rally, De La Cruz had said she welcomed him campaigning with Vallejo “because it clarifies the choice in this election.”

“Growing up, my abuelita always told me: ‘Dime con quién andas, y te diré quién eres,’” De La Cruz said in a statement after the rally. “By campaigning with the most extreme member of the Senate, my socialist opponent has told South Texans exactly who she is and why she is unfit to represent us in Washington.”

Vallejo was joined at the McAllen rally by two other Sanders allies: Greg Casar, a former Austin City Council member who is likely headed to Congress in January from a Central Texas district, and Jessica Cisneros, the former two-time primary challenger to U.S. Rep. Henry Cuellar, D-Laredo.

On Saturday, Sanders campaigned in San Marcos and Austin with Casar, whose November race is not competitive. After he took the stage in San Marcos, Sanders predicted Casar is “going to be one of the outstanding political leaders in this country.”

Sanders is on an eight-state tour to turn out progressive voters, recently telling The New York Times that he is “a little bit concerned that the energy level for young people, working-class people” is flagging. He held the San Marcos stop at Texas State University. 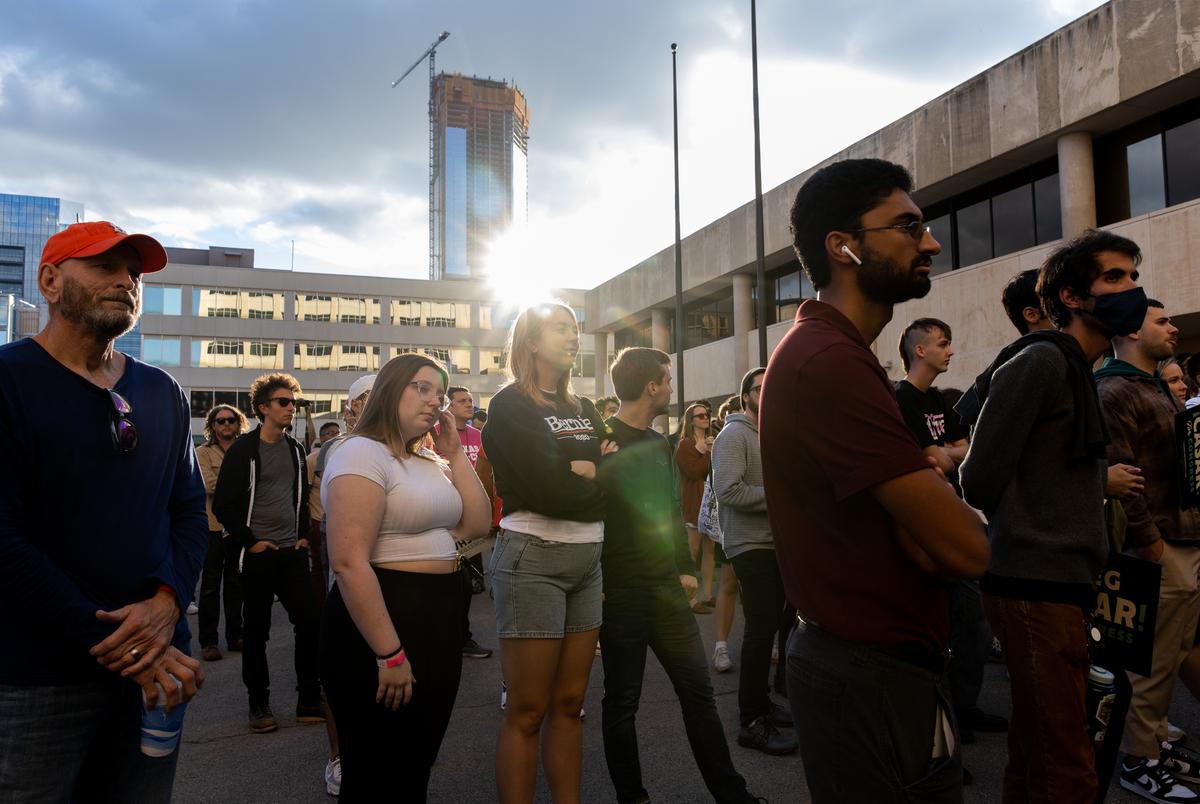 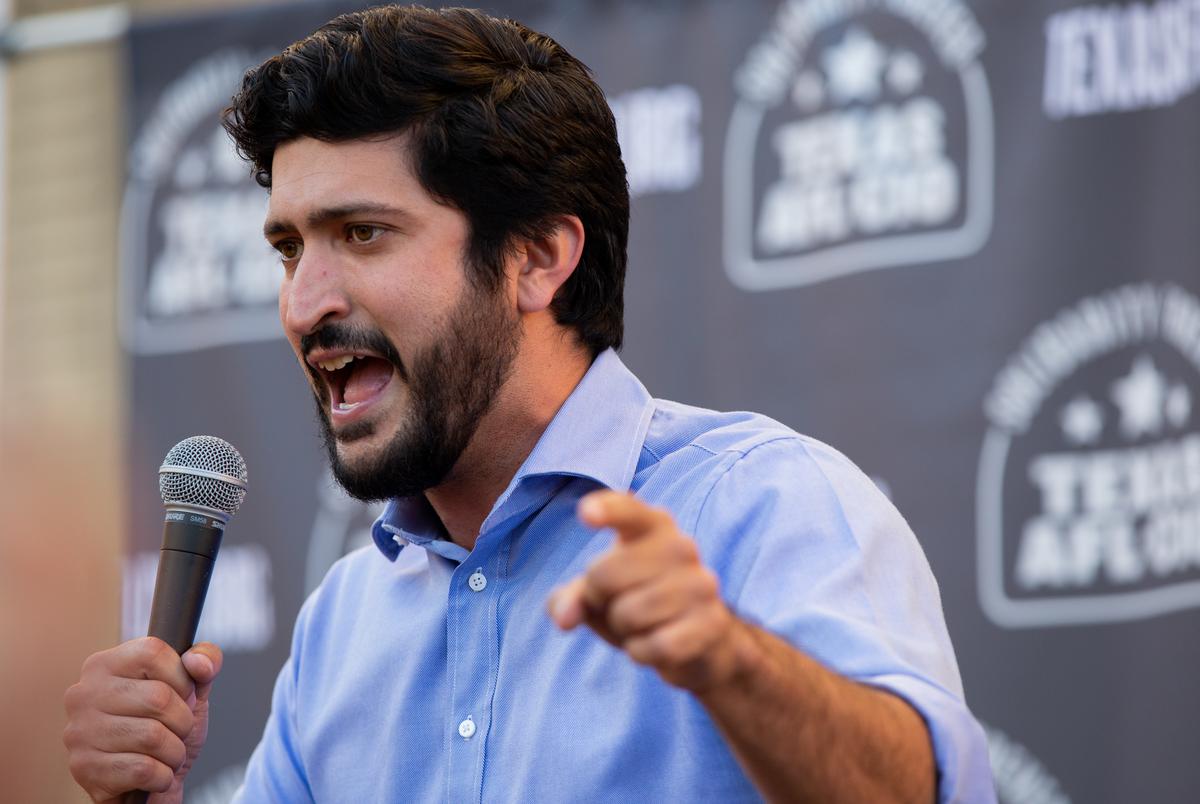 “The truth is that a midterm election is not as sexy as a presidential election,” Sanders said in San Marcos, telling attendees to tell their friends they are “dead wrong” if they do not think their vote matters right now.

In the evening, Sanders and Casar rallied with local labor leaders in the parking lot of the Texas AFL-CIO in Austin.

Sanders said the midterms were an election in which the country’s future was on the ballot, and he blamed right-wing extremists for the threats to democracy. He broadly endorsed Democratic leaders in Texas and encouraged people to vote, but he did not specifically endorse any statewide candidates.

Disclosure: The New York Times has been a financial supporter of The Texas Tribune, a nonprofit, nonpartisan news organization that is funded in part by donations from members, foundations and corporate sponsors. Financial supporters play no role in the Tribune’s journalism. Find a complete list of them here.