Man fatally shot in Spring after leaving restaurant told friends he was being followed: HCSO

ROBSTOWN — Former President Donald Trump swooped in to South Texas on Saturday to energize Republicans for the midterm elections in Texas, saying his supporters would fuel wide margins of victory.

“This Nov. 8, the MAGA movement is going to deliver another Texas-sized landslide,” Trump said during a rally outside Corpus Christi.

Speaking at the regional fairgrounds in Nueces County, Trump sought to leave his imprint on a host of competitive races, including Gov. Greg Abbott’s reelection bid and a trio of South Texas congressional races. And he unleashed attacks against a number of Democratic candidates, seeming to underscore how competitive some races have become.

Trump’s rally came two days before early voting starts for the November election in Texas. And it came a day after the U.S. House committee investigating the Jan. 6, 2021, riot at the U.S. Capitol subpoenaed Trump, demanding he testify about his efforts to overturn his 2020 reelection loss.

At the rally, Trump mentioned the subpoena and said lawmakers should instead investigate the “cooked, stolen election” — a claim that has been repeatedly debunked by audits, court rulings and members of his own administration. He urged supporters to fight back by delivering “a crushing rebuke to the radical-left maniacs” in the midterms and again teased a possible run in 2024. “I will probably have to do it again,” he said to the crowd.

Polls show that Republican statewide officials are in the lead in their races, sometimes by a comfortable margin, but they appear to be taking no chances.

Speaking before Trump, Patrick urged the crowd to vote straight-ticket Republican — and warned that O’Rourke could bring out voters who impact other statewide races. 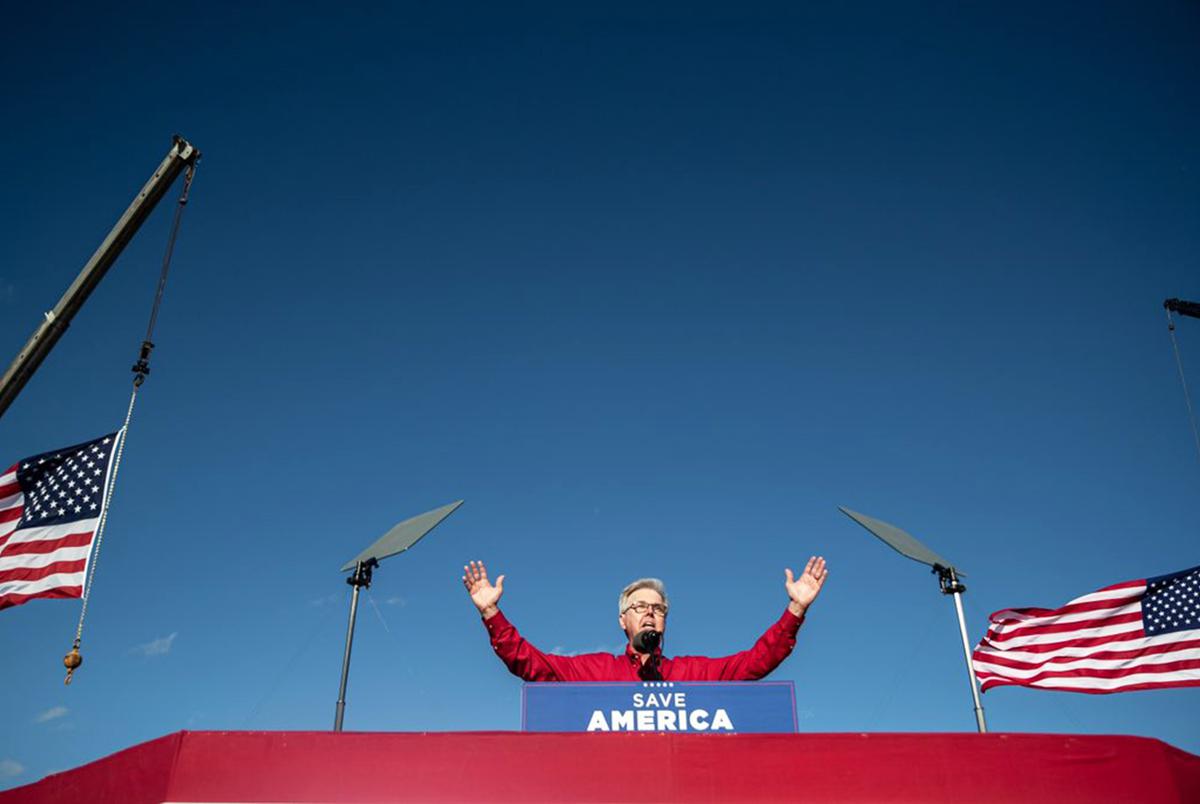 “People say to me, Dan, we don’t even know who you’re running against,’” said Patrick. “Now that’s a good thing, but here’s the truth: Whoever votes for Beto, they sure as hell aren’t crossing over and voting for me. We have nothing in common. So everyone who votes for Beto votes against me, votes against Ken Paxton and all the way down the ballot.”

Patrick was otherwise bullish about the election, predicting a Republican “tsunami.”

While Trump’s rally took place in South Texas, none of the three Hispanic women running for competitive congressional seats appeared at the event in person. Instead, two of them, U.S. Rep. Mayra Flores and Monica De La Cruz, recorded short video messages that were played to the crowd in between speakers onstage.

“I wish I could be with y’all, but I’m in McAllen tonight working hard to turn South Texas red,” said De La Cruz, who got Trump’s endorsement in her primary.

“Every Hispanic American in Texas … we welcome you to our party and our movement with open, open, beautiful and strong arms,” Trump said.

Flores’ Democratic opponent, U.S. Rep. Vicente Gonzalez of McAllen, has been working to tie her to Trump. He responded to the rally in a tweet, saying that Flores “stands with Donald Trump’s Republican Party, not with South Texas.”

The crowd did hear in person from Adam Hinojosa, the Republican nominee for a battleground state Senate seat in South Texas that includes part of Nueces County. Hinojosa, who faces Democrat Morgan LaMantia, likened himself to Trump, saying they are both businessmen who can run the government better than politicians.

Trump later endorsed Hinojosa from the stage, alluding to the influence Patrick wields with him when it comes to the Texas candidates he supports.

“Adam has my complete and total endorsement,” Trump said, “and it was approved by Dan Patrick, so how bad can that be, right?”

Abbott did not attend the rally. His campaign said earlier this week that he would miss it for a fundraising trip in Florida.

Trump nonetheless lavished praise on Abbott in multiple parts of his speech, saying he is “strong on borders, he supports our police and he’s turned Texas into a gigantic jobs magnet.” He bashed O’Rourke as “against God, guns and oil.”

O’Rourke was campaigning in Austin as the Robstown rally unfolded. He sent out multiple fundraising emails on Trump’s rally, including one Saturday that said the former president would be in Robstown to boost “extremist candidates” including Abbott.

“Texas Republicans think having our disgraced, twice-impeached former president in Robstown tonight is going to help them shore up support for their radical, far-right candidates in South Texas and statewide,” Texas Democratic Party Chair Gilberto Hinojosa said in a statement, dismissing the rally as a “joke.”

Besides Abbott, Trump promoted other statewide officials who are up for reelection, including Paxton, whom Trump repeatedly said he wished was his attorney general when he was in the White House.

“He would’ve figured out that voter fraud in two minutes,” Trump said.

Paxton sued four battleground states where Trump lost to President Joe Biden after the 2020 election, asking the U.S. Supreme Court to throw out the election results. The high court refused to consider the case.

Garza, Paxton’s opponent, fired back at Trump in a tweet on Sunday. She said Trump and Paxton are “scared” of her because her election would mean Paxton “will finally have to answer for his crimes.” Paxton was indicted on a securities fraud charge months after taking office in 2015; that case remains pending. More recently, he came under FBI investigation over claims from former top staffers that he abused his office to help a wealthy donor. He has denied wrongdoing in both cases.

Nearly two years after he lost reelection, Trump remains a polarizing figure in Texas. A University of Texas poll released Friday found that 44% of likely voters in the November election had a favorable opinion of him, while 47% had an unfavorable opinion. 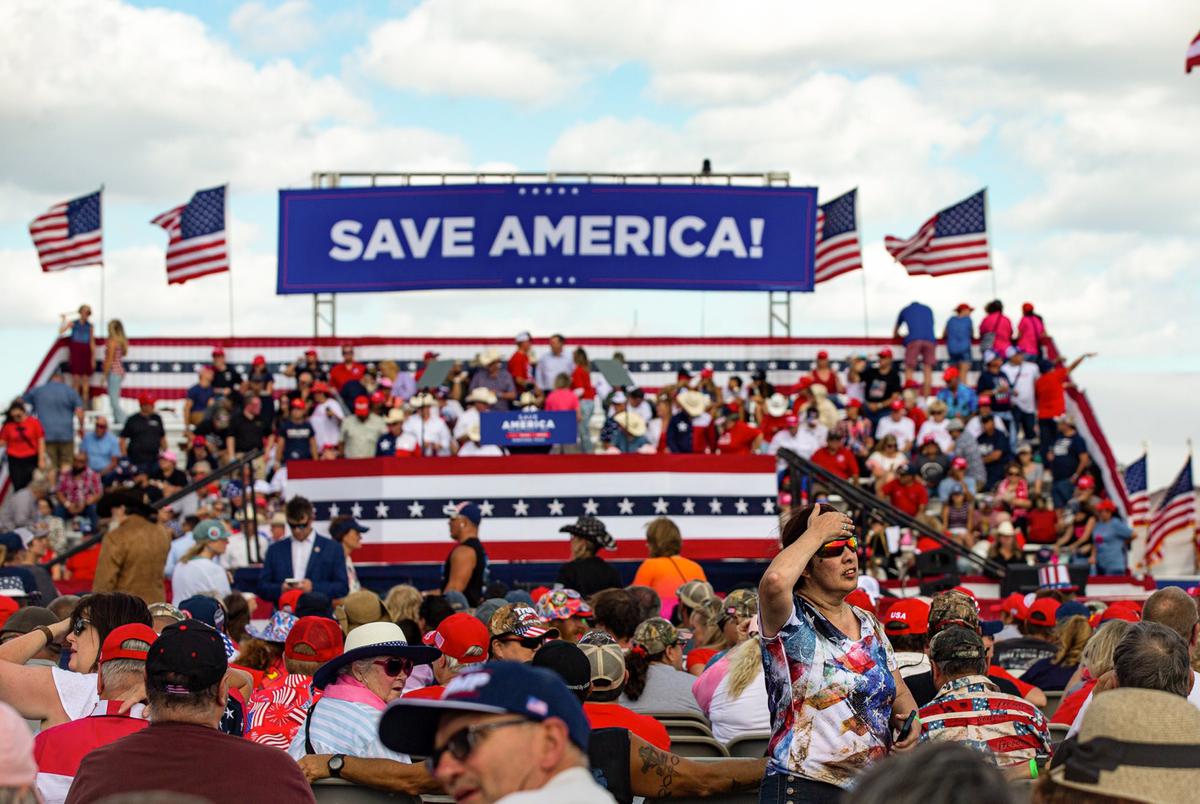 Yet he remains overwhelmingly popular with Republicans. In the same poll, 83% of likely GOP voters held a favorable opinion of Trump.

Thousands of people filled the fairgrounds on Saturday decked out in pro-Trump gear, including hats that said “Trump won” and others that promoted a Trump 2024 run. Large screens beside the stage displayed the message “Texas is Trump Country” as attendees streamed out afterward.

In interviews, rally attendees said they were basing their midterm votes on issues such as the economy and the border.

“It’s the economy, stupid,” said Kookii Crerar, a 63-year-old from Alamo. She added that her small hardware store is “suffering” and struggling to find employees because people are “getting money not to work” from the federal government.

Anthony Gillespey, a 50-year-old teacher from Corpus Christi, said he is concerned with maintaining Texas’ status as an exceptional state when it comes to both economic and social issues. His wife, Shannon, called the “sanctity of life” her top issue and said she was happy with the anti-abortion laws that Texas has in place following the end of Roe v. Wade.

“I’ve always said Texas is this shining light for the rest of the crazy country,” Anthony Gillespey said, pointing to the state’s economic recovery from COVID-19 as an example. “We came out the other end looking great.”

“I get scared Texas is going to become Austin,” he added, referring to the proudly liberal capital city.

Enthusiasm for Trump still ran high, especially when it came to the possibility of him running for president again.

None expressed concern about Abbott’s race. Turner said he liked how Abbott is “definitely interested in closing this border down.” Anthony Gillespey, who previously lived in El Paso, said he is “all for what Abbott is doing” on the border.

Trump’s potential comeback campaign was a regular topic among guest speakers. Wesley Hunt, the Republican nominee for a new congressional seat in the Houston area, referred to Trump as “our 47th future president.” U.S. Rep. Ronny Jackson, R-Amarillo, ended his speech by saying voters would put Trump “back in the White House where he belongs.” And Tom Homan, who was acting director of U.S. Immigration and Customs Enforcement, recalled a recent dinner with Trump at which 2024 came up.

“He comes back, I come back, we fix this shit,” Homan said.

Disclosure: The University of Texas at Austin has been a financial supporter of The Texas Tribune, a nonprofit, nonpartisan news organization that is funded in part by donations from members, foundations and corporate sponsors. Financial supporters play no role in the Tribune’s journalism. Find a complete list of them here.