But by mid-October, on the eve of the voter registration deadline, just a faithful few dozen gathered downtown for a Saturday evening rally. Lee Gaudreau, 49, said she was disappointed by the turnout.

Gaudreau has always voted Democrat, but after the Supreme Court decision she decided to get more involved. Already that Saturday in October, she’d helped organize a fundraiser, knocked on doors for Beto O’Rourke and sent postcards to voters on behalf of Mothers Against Greg Abbott.

But in the end, she said, she realizes she gets just one vote. She’s hoping Democrats, independents and moderate Republicans will come out in droves to register their displeasure with the state’s new abortion laws by voting not just for governor and attorney general, but for candidates all the way down the ballot. 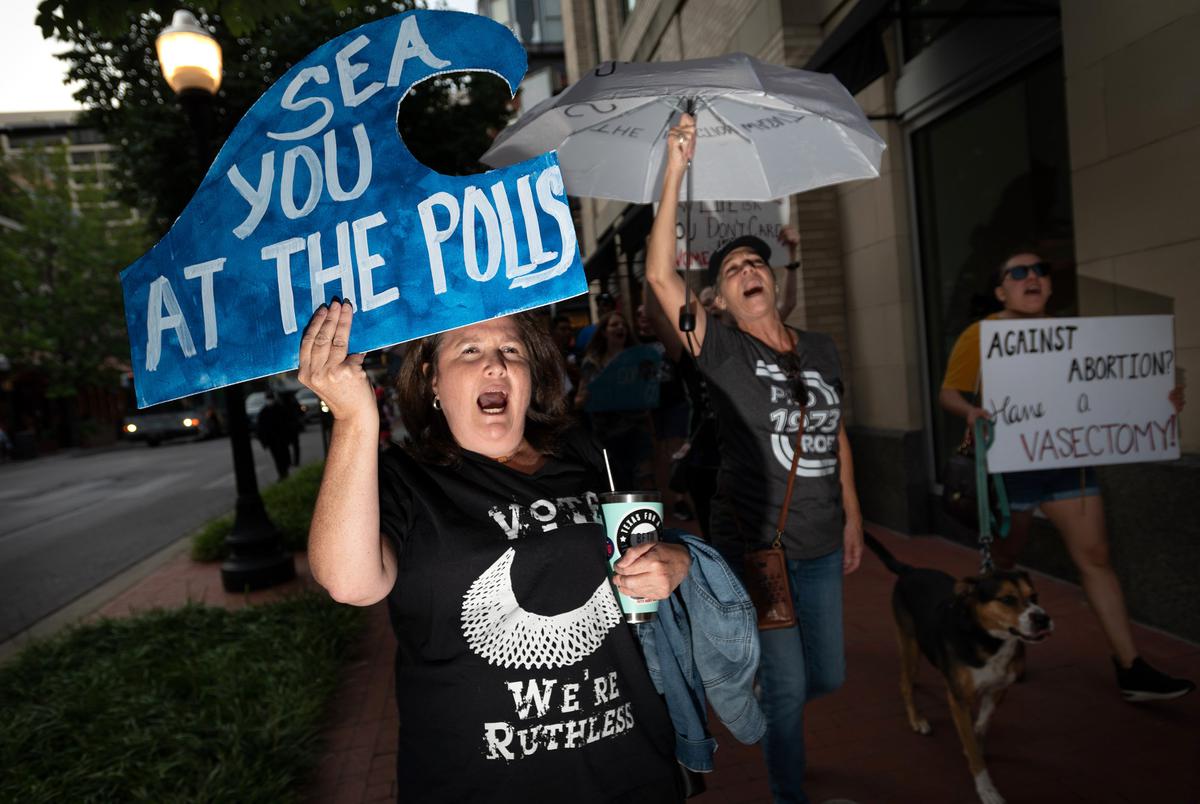 Lee Gaudreau at the Bans Off Our Bodies Fort Worth protest. Credit: Ben Torres for The Texas Tribune

Polling shows that a majority of voters in Texas oppose the state’s near-total ban on abortion, and after a landslide victory for abortion access in conservative Kansas in August, many Democrats hoped the issue might mobilize enough voters to tip the 2022 elections in their favor.

But Texas has not seen the same surge in voter registrations as other states, and as of late August, voters ranked abortion as only the ninth-most-important problem facing the country, after inflation, the environment, gun control and immigration.

In purple Tarrant County, where Democrats have recently won top-of-the-ticket races and Republicans dominate down-ballot, candidates, organizers and advocates are watching to see how the abortion issue shifts tight races — and what that means for the political salience of the issue going forward.

“This election is now a test of how important [abortion] truly is as a political issue, and Democrats’ ability to parlay what is pretty massive public support into electoral victories,” said Joanne Connor Green, a political science professor at Texas Christian University in Fort Worth.

No surge in new voter registrations

Until recently, Alexus Gelacio, 21, had never been particularly politically active. But she and some of her friends have been talking about the overturn of Roe v. Wade and what it means for young women like themselves. So when she heard about the Saturday evening rally in downtown Fort Worth, she went along with a friend.

While she was there, she decided it was finally time to register to vote, just a few days before the deadline.

“I just don’t like all the things going on, and women’s rights to make decisions for themselves getting taken away,” she said as she filled out the paperwork.

Gelacio represents the great hope of the Democratic Party, this anticipated wave of young people and women newly energized to get involved in local politics by the rollback of abortion rights. 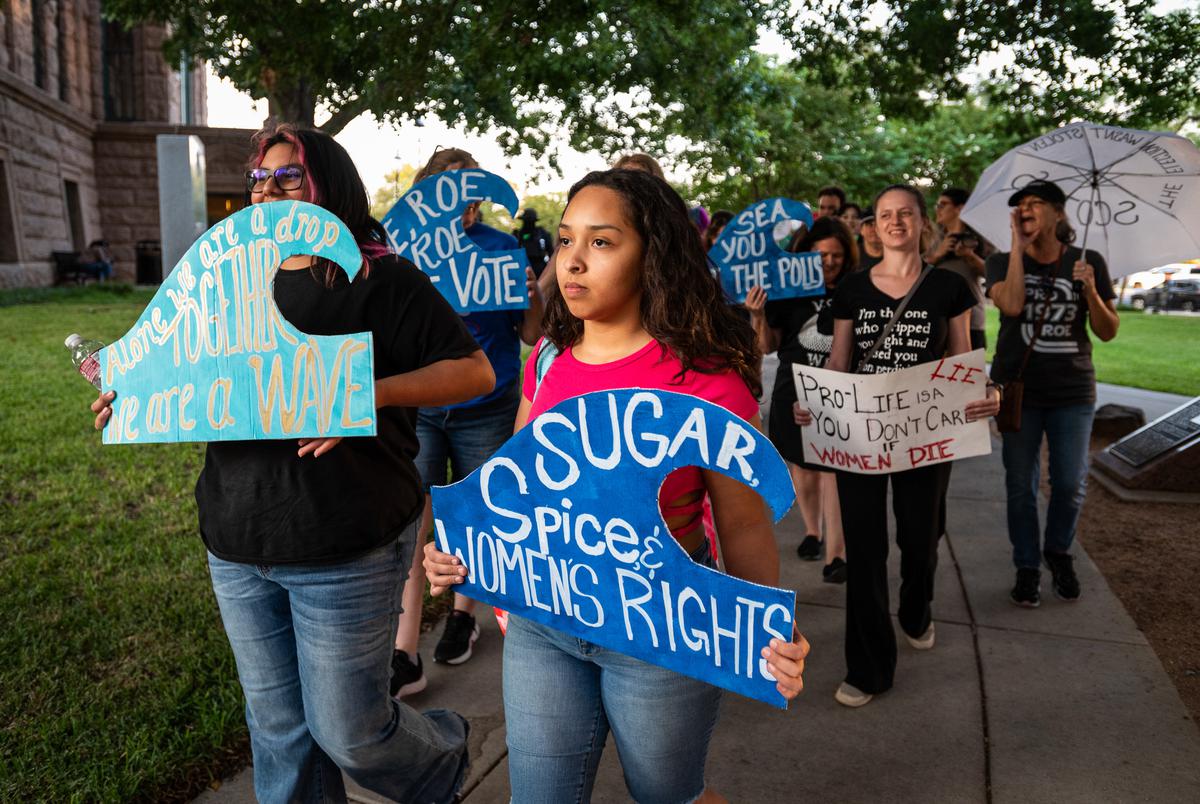 From left: Arianna Reyna, 17, and Alexus Gelacio, 21, march outside of the Tarrant County Courthouse. Gelacio said she wasn’t particularly politically active before the overturning of Roe v. Wade. At the Women’s Wave rally, she decided to register to vote, just a few days before the deadline. Credit: Ben Torres for The Texas Tribune

Texas did see a slight uptick in registered voters in the weeks after the overturn of Roe v. Wade, according to data provided by Derek Ryan, a Republican strategist and political data expert. About 40,000 more people were added to the rolls in the post-Roe period than during the same time frame in 2018.

But this is hardly the first time voters in Texas have been asked to mobilize to defend abortion access — and it’s possible the voter rolls reflect that reality, said Ryan.

“I have a feeling that people [for] who abortion was a top-level issue were probably largely voting to begin with,” Ryan said. “They were probably already engaged. … We’ve kind of already taken them into the equation, if you will.”

Without the surge in new voter registrations, the question is whether the new voters who have registered since the Dobbs decision are more motivated than in previous years. Only 61% of voters who registered between late June and early October 2018 actually turned out come November, Ryan found.

“It’s cliche and cheesy, but it’s an old saying for a reason — this election will come down to turnout,” Ryan said. “Whether these individuals show up to vote or not is going to be the determining factor.”

But in a state like Texas and a year like 2022, Democrats will need more than just a modest bump in turnout to flip the script. Republicans haven’t lost a statewide campaign in nearly three decades. They’ve controlled both chambers of the Legislature for nearly two decades, and redistricting last year allowed them to further entrench their majorities. 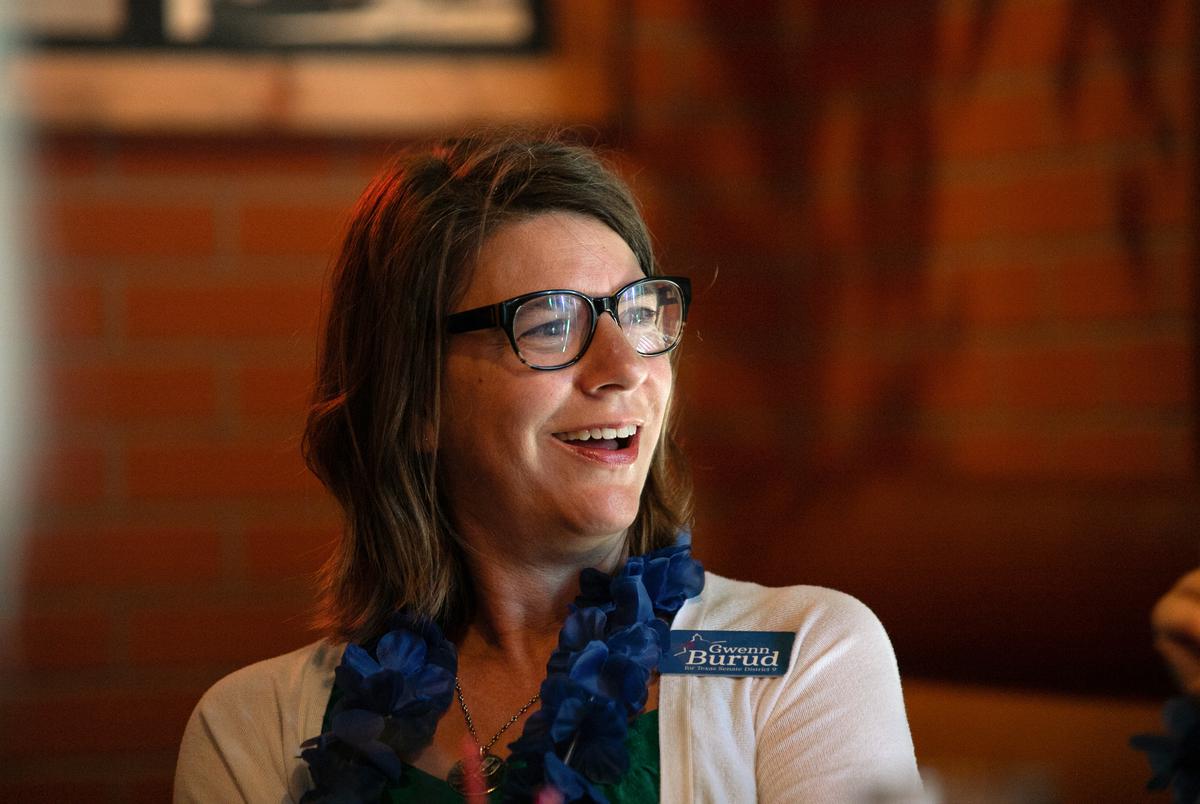 Democrat Gwenn Burud during her 2018 campaign for state Senate. Burud is again running in Tarrant County to unseat Republican incumbent Kelly Hancock. Support for “reproductive rights and individual liberty” is the first item on her platform these days, and she’s quick to discuss the issue with voters. Credit: Leslie Boorhem-Stephenson for The Texas Tribune

That’s part of why state Senate candidate Gwenn Burud is shaking the trees, hoping to turn out as many Democratic and undecided voters in her Tarrant County district as possible.

On a recent afternoon, Burud and her campaign manager knocked on doors in the quiet Fort Worth suburb of Haltom City, avoiding the house with the sign declaring “Jesus is my savior. Trump is my president.”

At one house, a man in his 70s answered the door. He said he always voted Democrat and planned to vote for Burud, who is running to unseat Republican incumbent Kelly Hancock.

“I’m really worried about what they’re doing to, you know, you guys,” he said, pointing at Burud. “You just don’t pass laws on … people.”

When Burud ran for Hancock’s seat in 2018, her campaign website alluded to her support for “women’s health.” When she declared a rematch for the 2022 election, her campaign literature simply said she wanted to see more women elected to office.

“The word abortion was taboo in Tarrant County,” Burud said. “Because of where I was running, there were a lot of moderates that you were trying to persuade, so I was told, ‘Don’t even go there.’”

Then came the overturn of Roe v. Wade in late June.

“We found out that a lot of women are more pro-choice than we thought,” Burud said. “Now, the messaging is like, run on abortion.”

Burud took the hint: Support for “reproductive rights and individual liberty” is the first item on her platform these days, and she’s quick to discuss the issue with voters.

Burud lost to Hancock in 2018 by 8 points, and she’s facing an even steeper climb this year with newly drawn district maps, a faltering economy and the usual disadvantage for the president’s party. Former President Donald Trump won Hancock’s old district by less than 2 percentage points in 2020. Under the newly drawn boundaries, he would have won by 13.

Burud’s campaign claims to have made more voter contacts than any other Legislative candidate in Tarrant County, and she said she’s heard, again and again, that the state’s near-total abortion ban goes too far. She said she has met many a “house divided,” where a husband and wife are voting differently from each other, and Republicans who say they are switching sides.

Green, at TCU, said while diehard Republicans are unlikely to be swayed based on the abortion issue, some more moderate and independent subgroups may still be up for grabs. Less educated white women are always a potential wild card, particularly when it comes to gender issues.

“Most people are really particularly looking at this demographic group, which should be voting Republican based on all other measures,” Green said. “But the question is, will their concern over reproductive issues be enough to motivate that group?”

Abortion advocacy groups like Planned Parenthood Texas Votes and Avow have been investing in voter outreach across party lines, hoping to capitalize on the disconnect between popular opinion and Texas’ abortion laws.

In Kansas, at least one-fifth of the people who voted to protect abortion access were registered Republicans. 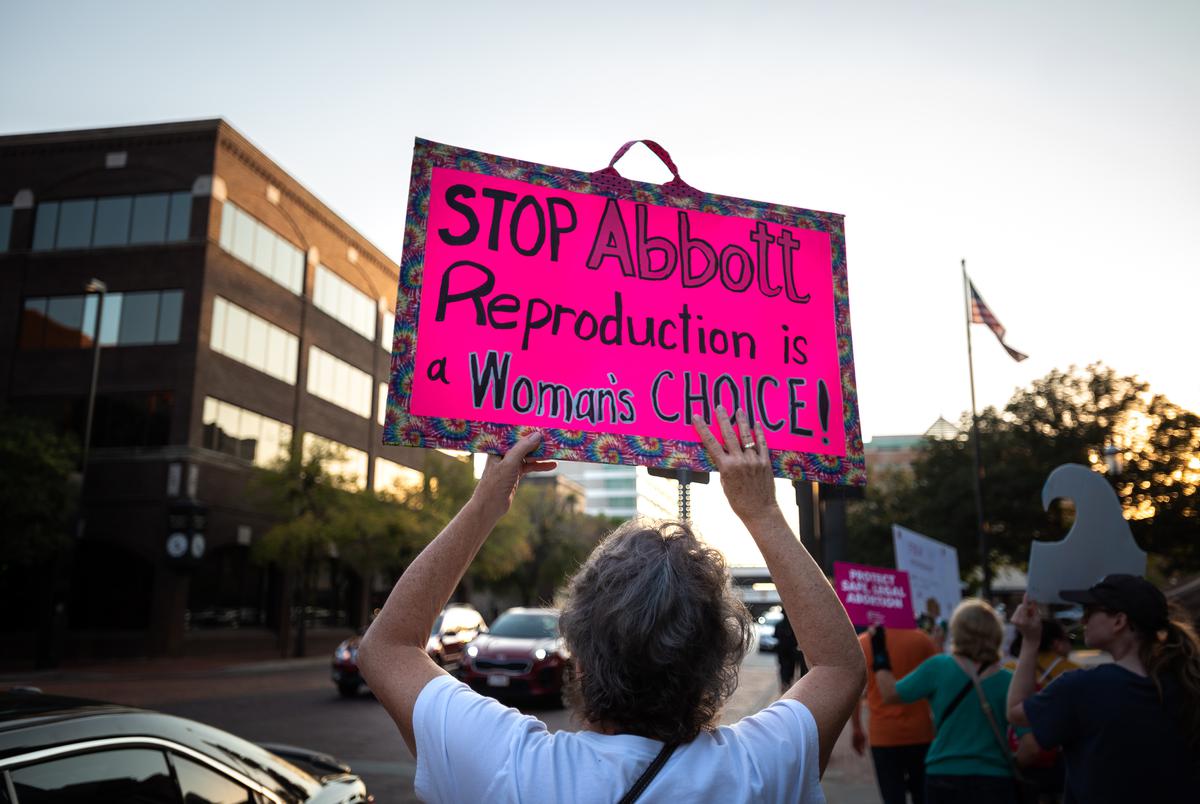 “But that was actually a referendum on abortion, and what we have in Texas is an election between three-dimensional, living, breathing human beings that have opinions on a wide variety of issues,” said James Riddlesperger, a professor of political science at Texas Christian University.

Convincing voters to see the connection between those three-dimensional candidates and their access to abortion is a tougher sell than a yes/no referendum. And while some people remain extremely motivated by abortion, other issues have taken the headlines — inflation, gun control, immigration, health care.

Rick Barnes, chair of the Tarrant County Republican Party, said while he’s heard more discussion about abortion this year than in past election cycles, he doesn’t believe it’s “a top topic” for voters.

“If you can’t buy gas and you can’t buy food … there’s bigger issues that are majorly affecting everybody right now,” Barnes said. “And those issues are top of the list of conversations with voters.”

The abortion issue has at least balanced out the “enthusiasm gap” between Republicans and Democrats going into the midterm elections, Riddlesperger said.

“Democrats seem to be about as excited about the election as Republicans are,” he said. “Now, does that mean that there are going to be enough Democratic votes to win elections in Texas? I think that remains to be seen.”

If abortion does prove to be the key component to help Democrats stave off the expected Republican rout this midterm season, the real challenge will be in maintaining that momentum for years — perhaps decades — to come.

“Even if we do shift the tides here in Texas this November, and we do have a wave of folks who come in and who are sexual reproductive health champions, that is just the beginning,” Tigner said. “One win does not mean that we’ve won, and so no matter what, it’s going to be a long fight.”

Disclosure: Planned Parenthood and Texas Christian University have been financial supporters of The Texas Tribune, a nonprofit, nonpartisan news organization that is funded in part by donations from members, foundations and corporate sponsors. Financial supporters play no role in the Tribune’s journalism. Find a complete list of them here.