HAVE YOU SEEN HIM? 59-year-old man accused of sexual activity with child back in 2020 wanted by Houston police

‘Thanks, and God bless you’: Asylum-seekers allowed to enter U.S. after ‘remain in Mexico’ ends

EL PASO — Willian woke up before dawn on a recent Tuesday, packed his legal documents into a blue folder and got in a van with other migrants to one of the international bridges that connect El Paso and Ciudad Juárez.

At the port of entry, the 46-year-old asylum-seeker from Ecuador was disenrolled from the Migrant Protection Protocols, or MPP. The U.S. Supreme Court recently ruled the Biden administration had the right to formally end the Trump-era policy. The program, also known as “remain in Mexico,” forced thousands of asylum-seekers to wait in Mexico as their cases made their way through U.S. courts.

Immigration officials transported Willian and at least eight other migrants to El Paso’s immigration court, where judges gave them all permission to stay in the U.S. They can continue their asylum cases in courts closest to wherever they settle.

After his hearing, Willian — who asked to be identified by his first name out of fear that criminals in Ecuador may target his family — walked out of the courthouse and felt a sense of relief wash over him. At a migrant shelter a few blocks away, he waited for his niece to pick him up before he caught a flight to New York City. He plans to stay with his sister-in-law there until his asylum case is decided.

It was his first time stepping on American soil as a free person after waiting a month in a Ciudad Juárez shelter.

“I think I’m finally going to be able to get a good night’s sleep. In Juárez, I couldn’t sleep very well,” Willian said as he stood outside Annunciation House, where a volunteer was administering rapid COVID-19 tests to migrants before they entered.

Willian is among the 7,112 who were enrolled in “remain in Mexico” and were returned to Mexico following initial enrollment under the Biden administration after Amarillo-based U.S. District Judge Matthew J. Kacsmaryk ordered it to restart the program in December. Immigrant rights advocates said the program had put vulnerable asylum-seekers in dangerous situations in Mexican border cities.

Not every migrant seeking asylum was enrolled in MPP. Immigration agents also have the discretion to let a migrant enter the country to make an asylum claim or send them back to Mexico under Title 42, the emergency health order that immigration officials have used 2.1 million times since March 2020 to quickly expel people seeking to enter the U.S.

During the Trump administration, 70,000 asylum-seekers were sent across the border under the program, which was launched in January 2019. The Biden administration canceled it in June 2021, sparking a lawsuit by Texas and Missouri that argued the decision violated administrative and immigration laws and forced the states to expend resources on migrants for necessities such as driver’s licenses, education for migrant children and hospital care. 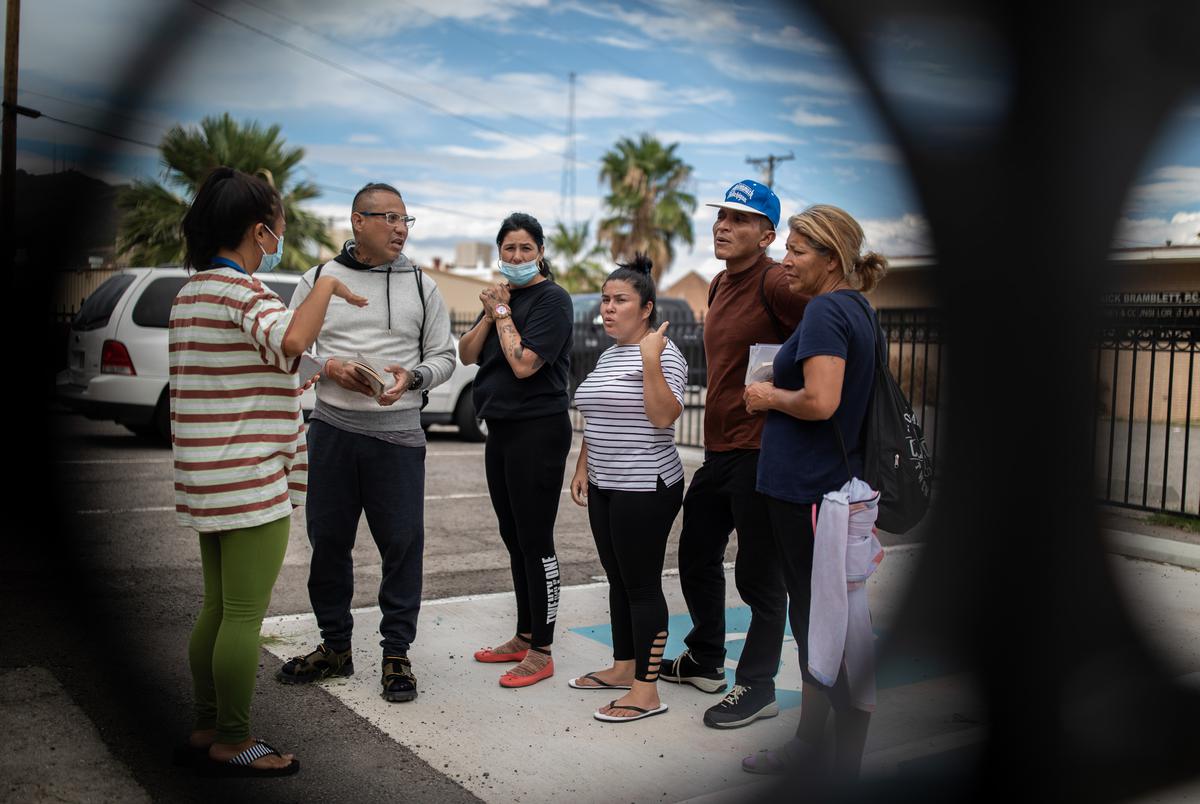 Migrants from Venezuela looking for a place to stay for the night on Tuesday spoke to a volunteer at Annunciation House, a local migrant shelter in El Paso. Credit: Ivan Pierre Aguirre for The Texas Tribune

In a rare win for the Biden administration on immigration policy, the U.S. Supreme Court in June ruled the administration had the legal right to end the program. Kacsmaryk, the federal judge, then rescinded his order.

Some immigrant rights advocates criticized President Joe Biden for not immediately ending the program after the Supreme Court ruling. On Aug. 8, five weeks later, the U.S. Department of Homeland Security said migrants placed in the program would be disenrolled at their next scheduled court date in the U.S.

“As Secretary [Alejandro] Mayorkas has said, MPP has endemic flaws, imposes unjustifiable human costs, and pulls resources and personnel away from other priority efforts to secure our border,” DHS said in a statement earlier this month.

Since that announcement, the actual ending of MPP has been bumpy.

Marysol Castro, a managing attorney with the Diocesan Migrant and Refugee Services in El Paso, which provides pro bono and low-cost legal representation to migrants, said in the first week after MPP ended that a judge denied her client’s request to continue their case in a different Texas court because it wasn’t clear whether migrants released from the program would be allowed to enter the U.S.

In another case, she said a couple and their son from Honduras who had been placed in MPP didn’t have a court date until 2023, which meant they would have to stay in Mexico for at least another year. She filed a motion to move up their court hearing, and last week they were disenrolled, released directly from the court and moved to Tyler.

Castro also said some people enrolled in MPP arrived at their court hearings in El Paso unaware that they were going to be immediately released into the U.S. — and not allowed to cross the border again — so some of them had to leave behind their personal belongings.

Being removed from MPP and allowed to enter the U.S. greatly increases migrants’ chances of being granted asylum, according to data compiled by the Transactional Records Access Clearinghouse at Syracuse University.

Only 2.4% of people placed in MPP under the Biden administration have been granted asylum. By comparison, 50% of asylum-seekers who have been allowed into the U.S. while their cases were pending have won the legal protection during the same period.

Castro said a government lawyer recently told her in court that her client was going to be deported now that MPP was over. She said she explained to the lawyer and judge that the end of MPP doesn’t mean asylum-seekers’ cases are over, but instead allows them to enter the U.S. until a decision is made in their cases.

On Tuesday, in Judge Nathan Herbert’s courtroom, three Venezuelan men and a Colombian man sat on wooden benches as Herbert explained their rights — including their right to continue their asylum requests in other U.S. cities.

“Señores, buena suerte y buen viaje” — good luck and have a good trip — Herbert told the men as they walked out of his courtroom at the end of the 45-minute court hearing. “Gracias y Dios le bendiga,” one of the men responded. Thanks, and God bless you. 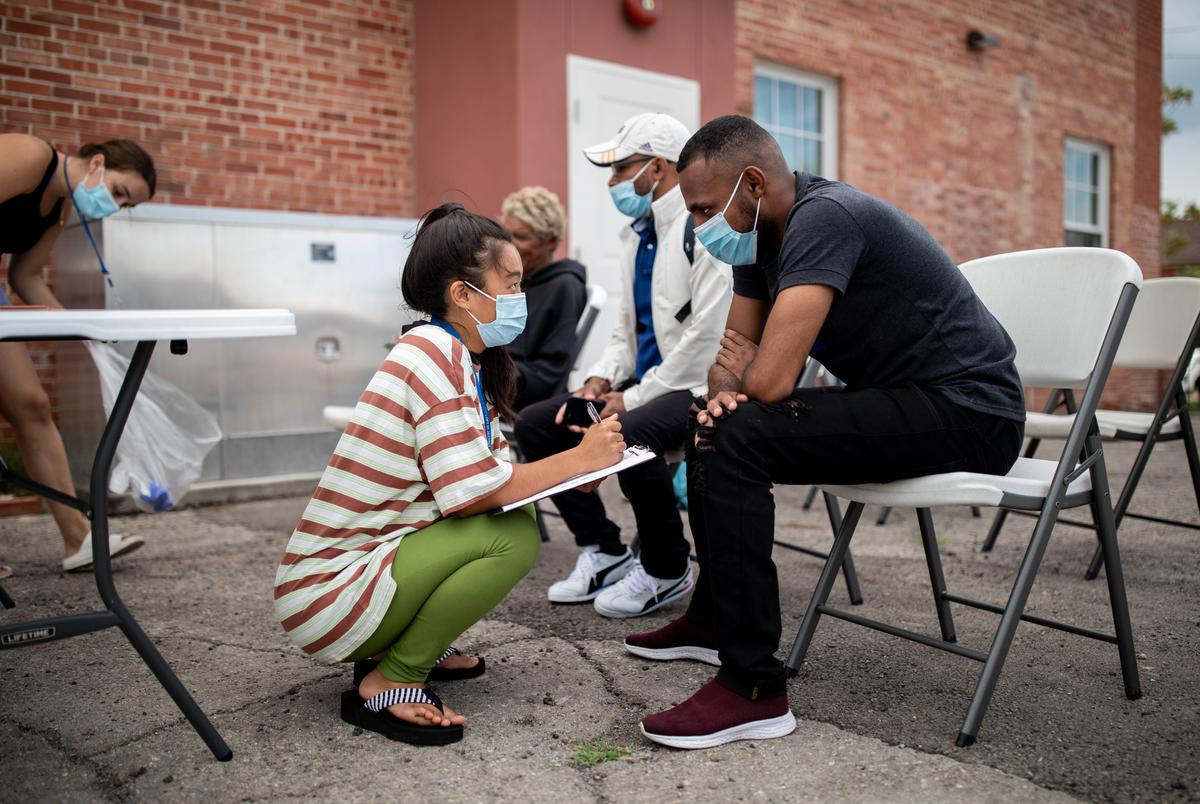 Annunciation House volunteer Kyung Ju Lee gives an orientation to 25-year-old asylum-seeker Arias of the Dominican Republic after arriving to the migrant shelter on Tuesday in El Paso. Credit: Ivan Pierre Aguirre for The Texas Tribune 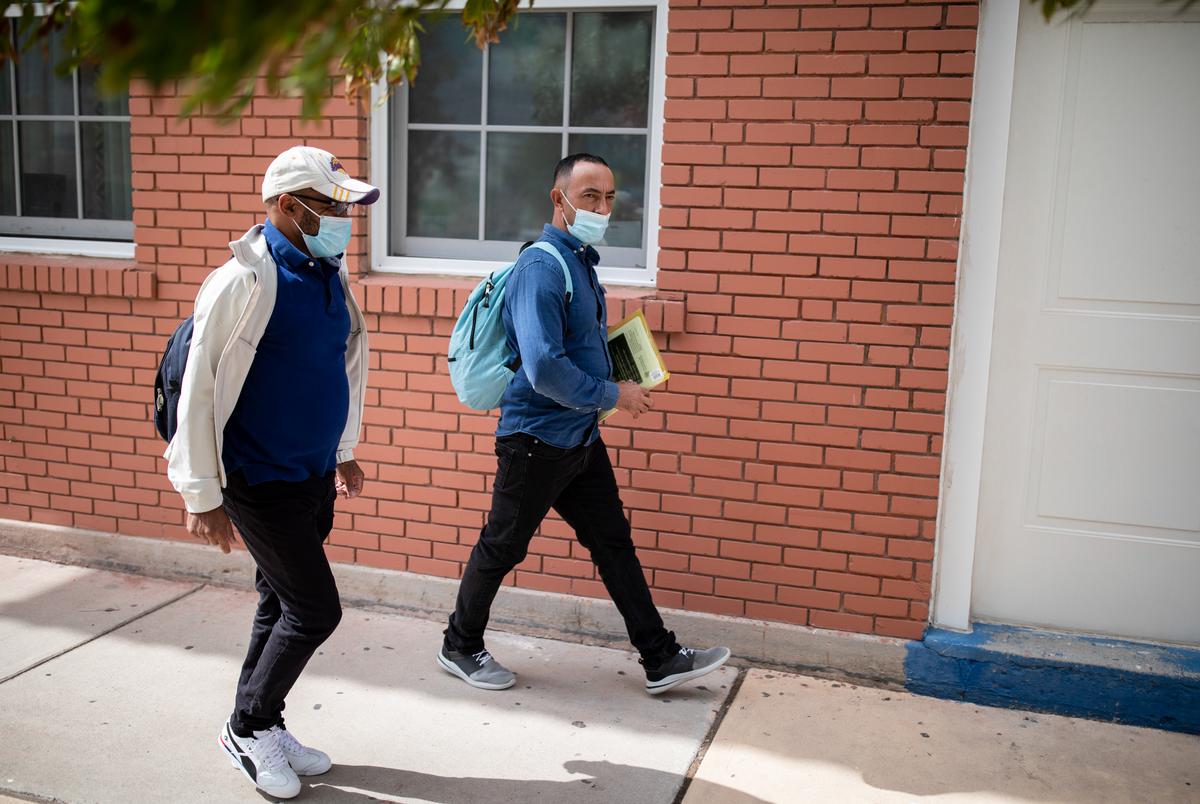 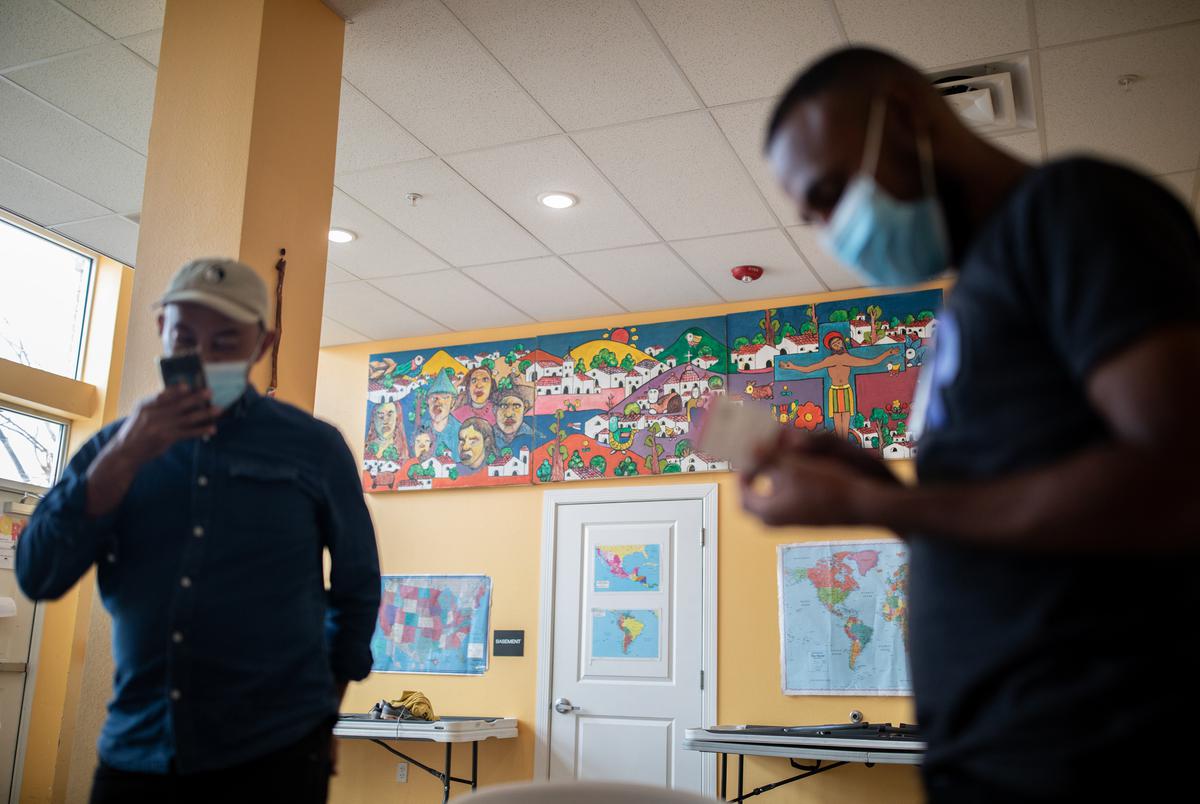 One of the Venezuelan men walked out of the federal building with a father and son from the Dominican Republic who had emerged from a different courtroom. He fist-bumped the Dominican father to celebrate their release from the program.

“I’m happy,” said the younger Dominican man, a 25-year-old who asked to be identified only by his last name, Arias. “I feel relieved.”

As they walked to Annunciation House, Willian joined them just outside the shelter.

Willian explained he left Ecuador because criminals attempted to extort him for $200 a month — one-third of his $600 monthly salary.

He said he was driving from his administrative job at the country’s health department to his home in September when a man on a motorcycle cut him off, approached his window and showed him a recent photo of his 18-year-old son and 11-year-old daughter at a park. The man, who was wearing a ski mask, told him the $200 monthly payment would guarantee the safety of his family, Willian said.

Two days later, two men in ski masks approached him again, demanding money. He said he tried to report the incident to the police, who told him that if he couldn’t identify or describe the men, they wouldn’t make a report.

“They were very discouraging,” he said.

Willian said the threats and demands for money continued until he resigned from his job in January and moved his family into his mother-in-law’s house, while he moved to a different city. But he said he couldn’t find a steady job and decided to leave Ecuador for the U.S. in June.

He arrived at the El Paso port of entry in July and requested asylum. He said he thought he was going to get deported to Ecuador. Instead, immigration agents enrolled him into MPP.

For the past month, he said he didn’t leave the Juárez shelter out of fear. Nearly two weeks ago, a wave of violence — sparked by the killings of two prison inmates by a rival gang — spilled out of the prison and into the city’s streets. One of the gangs killed 11 civilians in retaliation.

“When I heard the gunshots, I didn’t leave the shelter for anything,” Willian said, glancing at his phone to make sure he didn’t miss a call or a message from his niece.

He said he hopes he can win his asylum case, then bring his wife and two children legally to the U.S.

After the rest of the migrants received negative COVID-19 test results, they walked into the shelter. Willian sat alone on a bench outside the brown brick building until his ride showed up. He could now begin his journey to New York.

The full program is now LIVE for the 2022 Texas Tribune Festival, happening Sept. 22-24 in Austin. Explore the schedule of 100+ mind-expanding conversations coming to TribFest, including the inside track on the 2022 elections and the 2023 legislative session, the state of public and higher ed at this stage in the pandemic, why Texas suburbs are booming, why broadband access matters, the legacy of slavery, what really happened in Uvalde and so much more. See the program.