Houston Newsmakers: Memorial Park Land Bridge set to open to the public after years of construction

Paul Burka, a longtime Texas Monthly editor and leader of the magazine’s biennial list of the 10 best and 10 worst Texas legislators, could be as generous with his praise as he was unflinching with his criticism.

In a 1979 article, five years after he started what would turn into a four-decade career with Texas Monthly, he described former state Rep. Ronald Coleman’s virtues as “straight from a civics textbook: intelligence, industry, independence, fairness, vision, courage, and — a bonus that must have come as a surprise even to Coleman — influence.” In the same issue he wrote of former state Sen. Bob Price: “If the Senate were a horse race, nobody would bet on him. Slow out of the gate, weak down the stretch, a nice guy who, true to form, finished last.”

The list “completely defined the lens for nearly 50 years of how we hold elected officials in the Capitol accountable and how we think about and talk about success and failure,” said Texas Tribune CEO and former Texas Monthly editor Evan Smith. “That list was the most eagerly anticipated, hotly awaited piece of journalism every two years.”

Burka, a titan of Texas political journalism who was known by former Texas Monthly colleagues as “the soul” of their newsroom, died Monday. He was 80.

“He was relentless in his devotion to excellence,” said Bill Broyles, the first editor of the magazine. “He understood Texas and Texas politics better than anyone ever has. There won’t be anyone like him again because he was so even-handed and fair-thinking.”

Burka was born in Galveston on May 21, 1942. He graduated from Rice University with a bachelor’s degree in history before getting his law degree from the University of Texas at Austin School of Law.

Burka started at the magazine on Oct. 1, 1974, as an associate editor, over a year after the publication’s founding and after spending several years as a staffer in the Texas Senate. His first story was about Clark Field, the baseball field where the Texas Longhorns used to play, but soon enough he found himself back in the halls of the Capitol.

He penned expansive profiles of Texas political figures like former governors Ann Richards and John Connally. In 1985, he won a National Magazine Award for a two-part series about Clinton Manges, the controversial Texas oil tycoon. In 2006 he launched “BurkaBlog,” which became one of the magazine’s most popular digital features.

“There was a clarity to his writing and also a range,” said Stephen Harrigan, a longtime contributor to the magazine. “He had a historical context for everything he was writing. You had the sense that when you were reading a Paul Burka article, you were in the hands of somebody who really knew what he was talking about.” 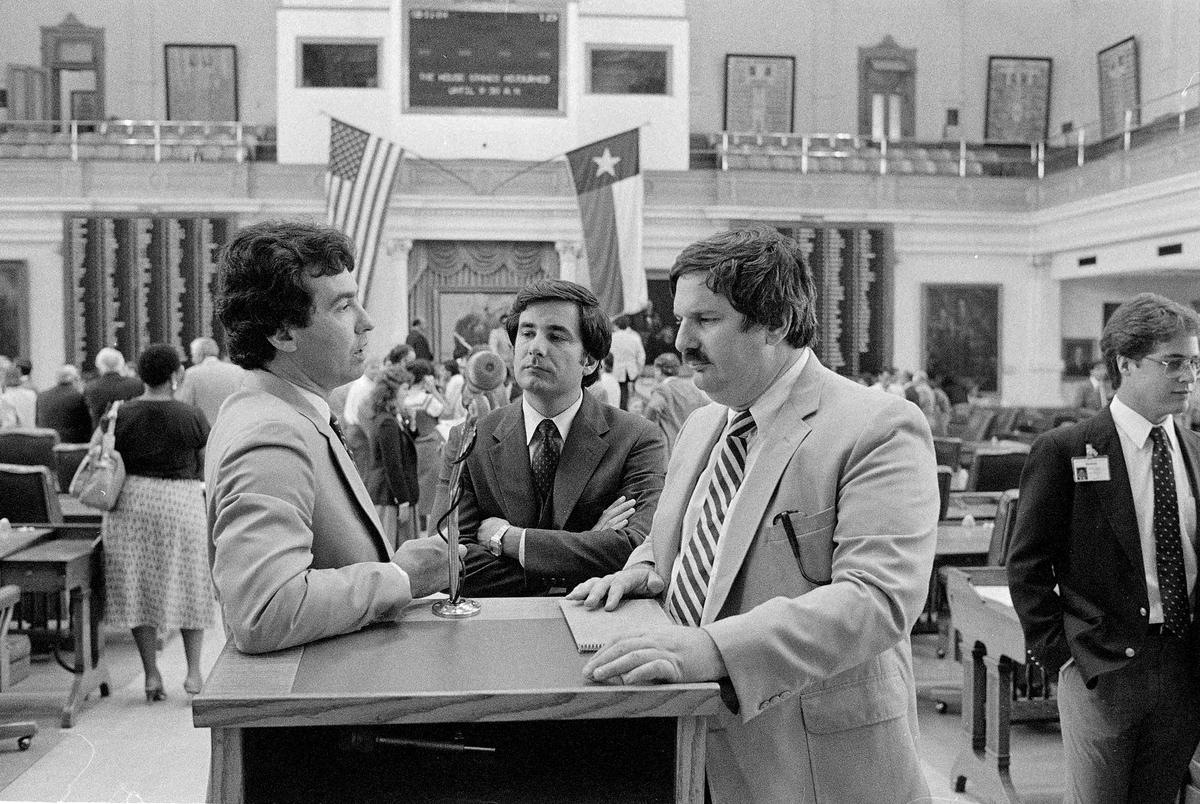 From left: Gordon Arnold, Mike Toomey and Paul Burka on the floor of the Texas House in an undated photo. Credit: Muliadi Soenaryo

He also wrote stories that weren’t about politics. One story involved Burka reflecting on learning to love his father, who died when Burka was 4.

“In death, he became a figure that was larger than life, a paragon of everything that was upstanding and decent,” Burka wrote. “[After learning about his history], I had finally begun to know him, not through his achievements, but through his mistakes.”

Burka would eventually become a senior executive editor at the magazine. In a farewell piece when Burka departed the magazine in 2015, he wrote: “Editing requires a different skill set: the skepticism of an attorney and the patience of a diplomat. I may not have always demonstrated those abilities, but it was fulfilling to help young writers.”

And he emphasized fairness in reporting. Former editor-in-chief Brian Sweany wrote in a 2015 Texas Monthly story that Burka would tell writers to look at the meanest line in a story about someone and ask if they thought it was fair. He would also tell writers to never judge a person by their worst day.

Greg Curtis, who wrote for Texas Monthly, was the magazine’s second editor and first met Burka when they were students at Rice, said he relied on Burka’s editing as a writer.

“He knew how politics worked better than any of us,” Curtis said. “He knew the right questions to ask, he knew where there were problems.”

Burka loved sports, food and good reporting — and had a knack for always being late. He was also unfailingly kind and smart, his former colleagues said.

“Paul had more wisdom and common sense than perhaps anybody else on the magazine,” said Texas Monthly founder Mike Levy. “As sweet and as nice as anybody on the face of the Earth is.”

As news broke of his death on Monday, tributes poured in. Former Texas House Speaker Joe Straus called Burka a “great reporter and writer” whose “work helped Texans better understand this state, its politics, its history, and its future.” Robert Draper, a former Texas Monthly staffer, said Burka was the “Best editor there ever was.”

Harrigan, the longtime magazine contributor, said “there was something human” to Burka’s professional and personal sides. He was a relentless reporter, but also someone who was selfless and funny.

Disclosure: Rice University, Texas Monthly and University of Texas at Austin have been financial supporters of The Texas Tribune, a nonprofit, nonpartisan news organization that is funded in part by donations from members, foundations and corporate sponsors. Financial supporters play no role in the Tribune's journalism. Find a complete list of them here.

The full program is now LIVE for the 2022 The Texas Tribune Festival, happening Sept. 22-24 in Austin. Explore the schedule of 100+ mind-expanding conversations coming to TribFest, including the inside track on the 2022 elections and the 2023 legislative session, the state of public and higher ed at this stage in the pandemic, why Texas suburbs are booming, why broadband access matters, the legacy of slavery, what really happened in Uvalde and so much more. See the program.