A 14-year-old went to Texas to help his family build a bigger house in Guatemala. Now his family is burying him.

Editor's note: This article was originally published in Plaza Pública, a publication based in Guatemala City. You can find the original Spanish language version here.

GUATEMALA CITY — If Juan Wilmer Tulul Tepaz hadn’t traveled to the U.S., he would have been celebrating his 15th birthday on Friday. But once he got the idea to go north, nobody could convince him to stay, not even his mother, Magdalena Tepaz, or his father, Manuel Tulul.

“We told him he was too young, that he should wait. But he had already made up his mind,” Tepaz said just hours before Juan Wilmer, the third of her four children, was buried.

Juan Wilmer, called “Apú” by everyone who knew him, dreamed of building a house for his family, especially for his mother. In the village of Tzucubal, within the municipality of Nahualá, which is about 96 miles west of Guatemala’s capital and mostly inhabited by indigenous K’iche’ Maya residents, many dream of building a big, beautiful house. Juan Wilmer lived with little more than life’s absolute necessities, in a two-bedroom cinderblock home with a tin roof. All his belongings fit easily into two bags.

Juan Wilmer wanted more from life. He was willing to try his luck and cross the border, as his older brother had done before him a year earlier.

He was one of the 53 migrants who died in San Antonio on June 27 after traveling in a baking-hot tractor-trailer — the largest death toll in smuggling incidents of this kind to date. Authorities from Mexico, Guatemala and Honduras have confirmed that citizens from their countries were among the victims.

According to a 2020 report from the Guatemalan president’s office, 84% of Nahualá’s inhabitants live in poverty and 13% live in conditions of extreme poverty.

Most families there do not live in crowded conditions, and 99.37% of the dwellings are detached homes, according to the country’s National Institute of Statistics.

Although the Tulul Tepaz family has their own home, they have had to make sacrifices to make ends meet. Juan Wilmer left school after sixth grade to work the fields with his father. Agricultural workers in Nahualá earn about $3 to $5 daily, if that. Feeding a family of six on those wages was a never-ending battle.

That’s why Juan Wilmer’s older brother Nicolás took off a year ago to look for work in the United States and send money back home to his family. He hasn’t been able to send much since he is still paying off his debt to the smuggler who helped him get to the U.S. People who try to enter the country this way commonly pay smugglers rates of over $12,000 to get them across the U.S.-Mexico border. 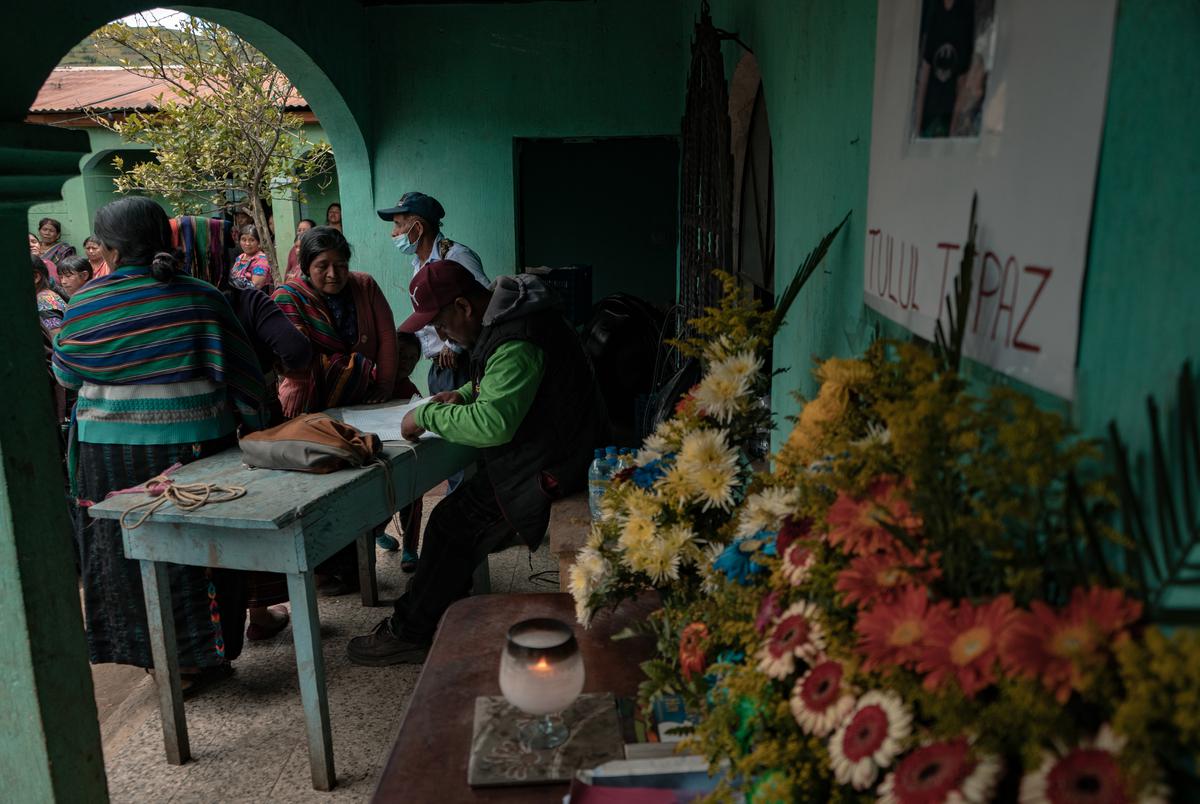 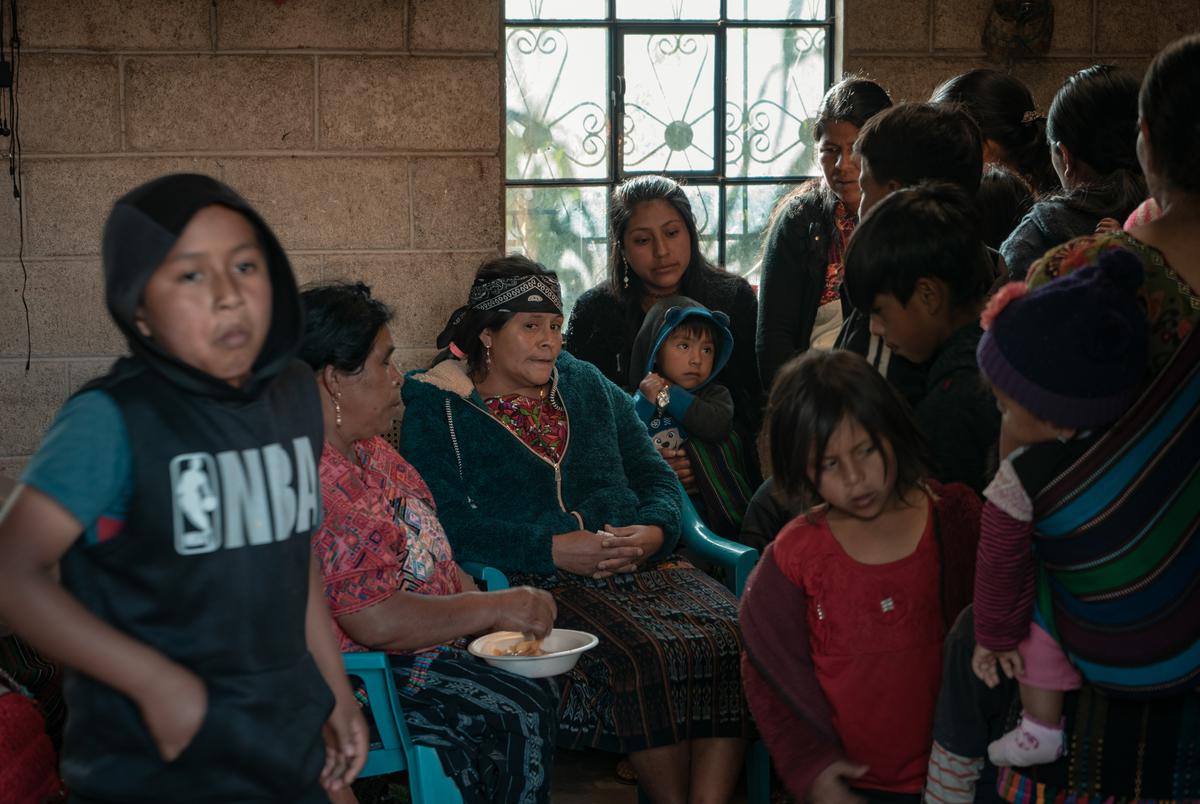 Magdalena in her home as neighbors and relatives arrive to offer their condolences. Credit: Eduardo Say/Plaza Pública

Juan Wilmer had a similar arrangement with his smuggler: He would begin paying off the debt when he’d arrived to the U.S. His family was willing to mortgage their home to help settle the debt. Since Wilmer never arrived at his destination, the deal was off.

With her gaze unfocused and her face disconsolate, Tepaz has been wearing the traditional sign of mourning — a red scarf on her head — since June 27, the day she learned that her son had died. She knew something was wrong when Juan Wilmer stopped communicating with the family.

The last time Juan Wilmer’s family heard from him was when he sent a voice recording that he was about to board the tractor-trailer. He also sent a photo to his family and asked them to pray for him. The audio recording and the photo exist now only in Tepaz’s memory — she couldn’t stand the pain of hearing her son’s voice over and over again, and she deleted them.

“It made her so sad,” said Cristina Tulul, Wilmer’s cousin, who translated from Magdalena’s native language, K’iche’.

Juan Wilmer’s father, Manuel, couldn’t hide his pain either. A stoic man of few words, he tried his best to maintain composure. But there were moments when he broke down, like when he had to travel to Guatemala City to identify the body of his son; and when Juan Wilmer’s body was brought back home; and when he clung to his son’s coffin, as if he could not bear to let it go, before beginning the long march toward the cemetery.

Juan Wilmer’s body was brought home to Tzucubal the night of July 16. His body was the second to be repatriated of the 21 Guatemalans who died in the San Antonio tragedy. During Juan Wilmer’s vigil, five minutes away in Tzucubal, Ixtahuacán, another group of mourners grieved for 17-year-old Johny Tiquin, who also died in Texas.

In the department of Sololá there are two Tzucubal villages due to a long-running territorial feud between the municipalities of Nahualá and Ixtahuacán. The village was finally divided, King Solomon-style, into two parts: Tzucubal, Ixtahuacán, and Tzucubal, Nahualá. The inhabitants of the region blame this perpetual conflict, coupled with the lack of employment opportunities, for the migration of their children and youth to the U.S.

Juan Wilmer lived in the village on the Nahualá side, but residents say misfortune has rained on both Tzucubal villages. A day earlier, the neighbors on the Ixtahuacán side received the body of 13-year-old resident Melvin Guachiac, who also died in the San Antonio trailer.

His body was the first to be repatriated after the tragedy. Melvin was memorialized in his home and was buried in the village, a few meters away from the space reserved for Juan Wilmer.

Juan Wilmer, Johny and Melvin were together when they boarded the trailer.

Friends and family adorned Juan Wilmer’s coffin with his soccer uniforms and two brand-new soccer balls. Everyone remembers him as the goal scorer for the Tzucubal team when it played games in other municipalities across Guatemala.

Juan Wilmer scored his last goal during the finals of a tournament held for the inauguration of a sewer system in the Xola neighborhood of Tzucubal. 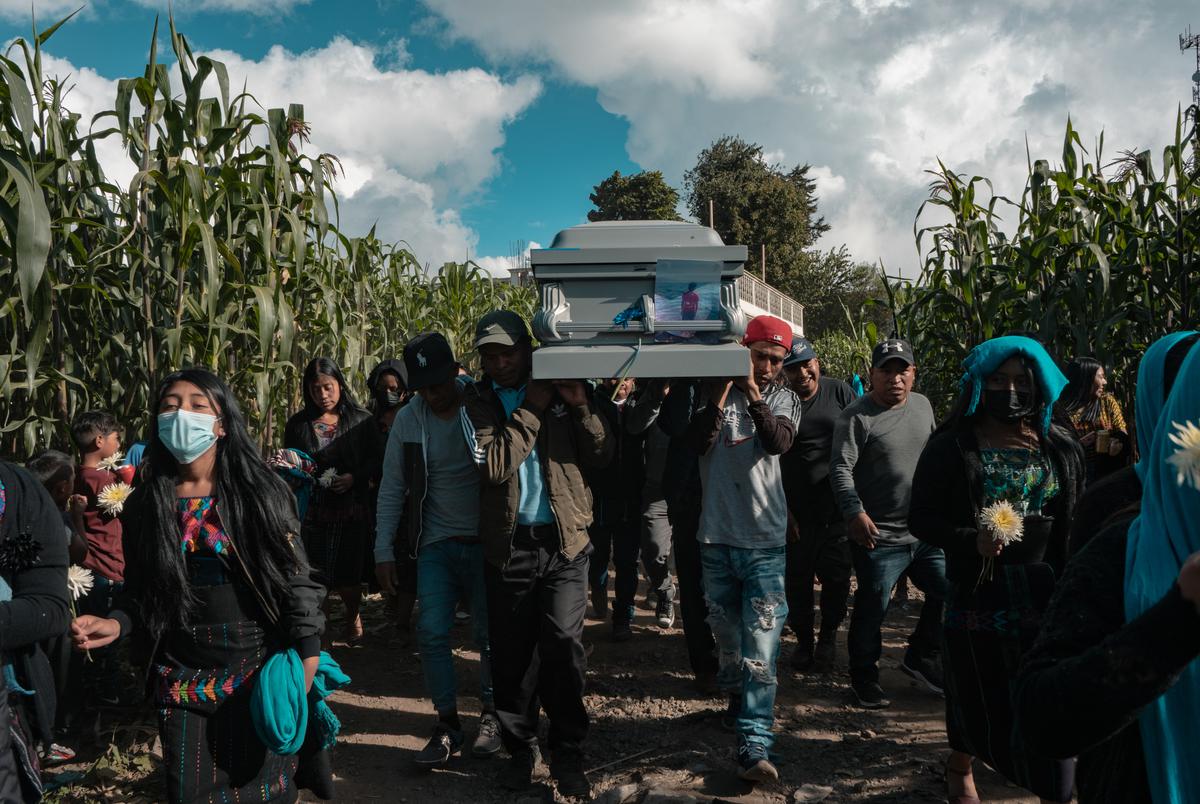 The tradition of the village is to bury the deceased with their belongings. Two sacks were more than enough to hold all of Juan Wilmer’s belongings, including his soccer uniforms, cleats, sneakers and clothing.

The morning of July 18, among a chorus of wailing and cries of pain, Juan Wilmer’s family and about 300 neighbors marched in procession to the local cemetery to say goodbye to him. A band played funeral marches as the villagers walked. One of the musical pieces recounted the story of a man who crossed the border and regretted leaving his father behind to work the fields alone.

The costs of the music, food, funeral and other expenses were covered by the family, with the assistance of neighbors and a sizable contribution from other Guatemalans living in Houston, Dallas and New York.

Tepaz said the only way she can endure her pain is by holding on to God, just as her son did when he boarded the truck and asked her to pray for him.

Remittance houses: the riches from elsewhere

In both Tzucubal villages, the difference between homes blessed with remittances from the U.S. and homes financed only by local field labor is extraordinary.

In less than a decade, residents say, the villages have made big strides in development; however, the progress has nothing to do with local or national government economic development programs. Progress has come thanks to the men, youths and children who went without a childhood and crossed the border to the “American Union,” as they refer to the U.S. in Tzucubal.

“Everything you see around you, it is not from here, it is from there,” said teacher Maria Tepaz, 30.

Two blocks from the Tulul Tepaz house where Juan Wilmer grew up with dreams of emigrating stands a white two-story house, with showy architecture, tinted windows, arches and gold-toned ornamentation. This same style is replicated in half the houses in Tzucubal. 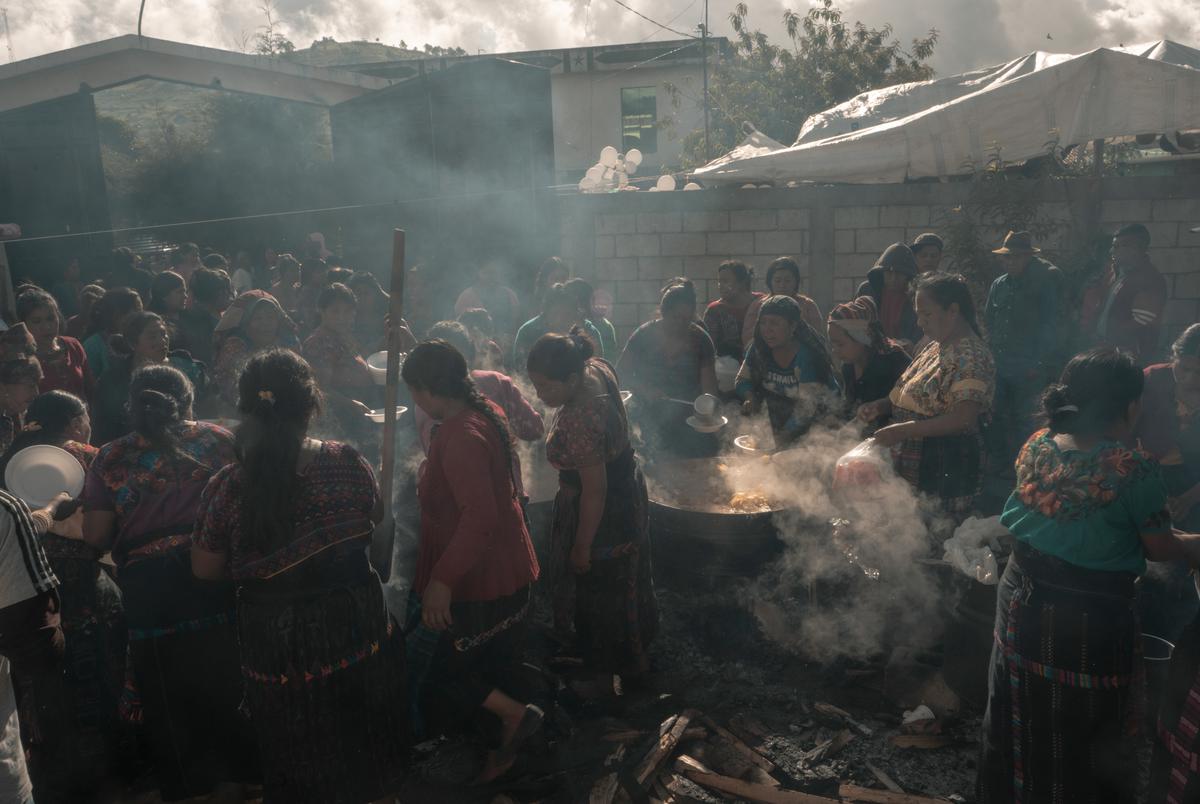 One of the neighbors explains: “The thing is, those are the families who have someone on the other side [in the U.S.]. The ones who live off the land, we’re another story.”

According to the International Organization for Migration, Nahualá is known for its high rate of emigration. Many of the Guatemalans who are deported from other countries each year are from this municipality.

There hasn’t been a campaign or migratory policy that has been able to persuade people not to risk their lives crossing the border. There is no message that can extinguish the desire to seek a better life.

Juan Wilmer’s cousin Cristina said that despite the intense grief and mourning surrounding them in Nahualá, another group of local youths began their own journey north last week.

Cristina is certain of one thing. Neither the tragic deaths of Juan Wilmer, Johny and Melvin, nor the recent drowning of Griselda and Carla Tambriz, two young sisters also from Nahualá who died as they tried to cross the U.S. border, can stop the flow of people leaving to the U.S.

In spite of the devastating deaths, Cristina predicts that children, teenagers and young adults will continue dreaming of a better future far from their village.

Juan Wilmer’s parents are now fearful for their youngest child, who is only 10 and told them that when he turns 15, he plans to follow the same path as his brothers.

This story was translated by June Griffin Garcia.

When you join us at The Texas Tribune Festival Sept. 22-24 in downtown Austin, you’ll hear from changemakers who are driving innovation, lawmakers who are taking charge with new policies, industry leaders who are pushing Texas forward and so many others. See the growing speaker list and buy tickets.