HAVE YOU SEEN HIM? 59-year-old man accused of sexual activity with child back in 2020 wanted by Houston police

In San Antonio, tears, prayers and rain at a vigil for migrants who died in a sweltering trailer

SAN ANTONIO — Dozens of people stood in a circle in Pearsall Park on Tuesday with their cellphone lights playing the role of candles.

Some gave speeches on a microphone that didn’t always pick up all of their words — which at times were drowned out by rain and thunder. Others listened while trying to hold back tears.

A day before and 5 miles from the park, authorities had found 46 people dead and others near death inside a scorching tractor-trailer near Lackland Air Force Base. Of the 16 who were taken out of the trailer alive, five died after arriving at area hospitals.

San Antonio officials at the site — now home to a makeshift memorial crowded with roses, prayer candles and despair — said the incident appeared to be the deadliest migrant-smuggling tragedy in memory.

But while politicians and others seemed fixated on arguing about immigration policies, the several dozen who arrived for the evening vigil said they didn’t want the people who died to be forgotten. 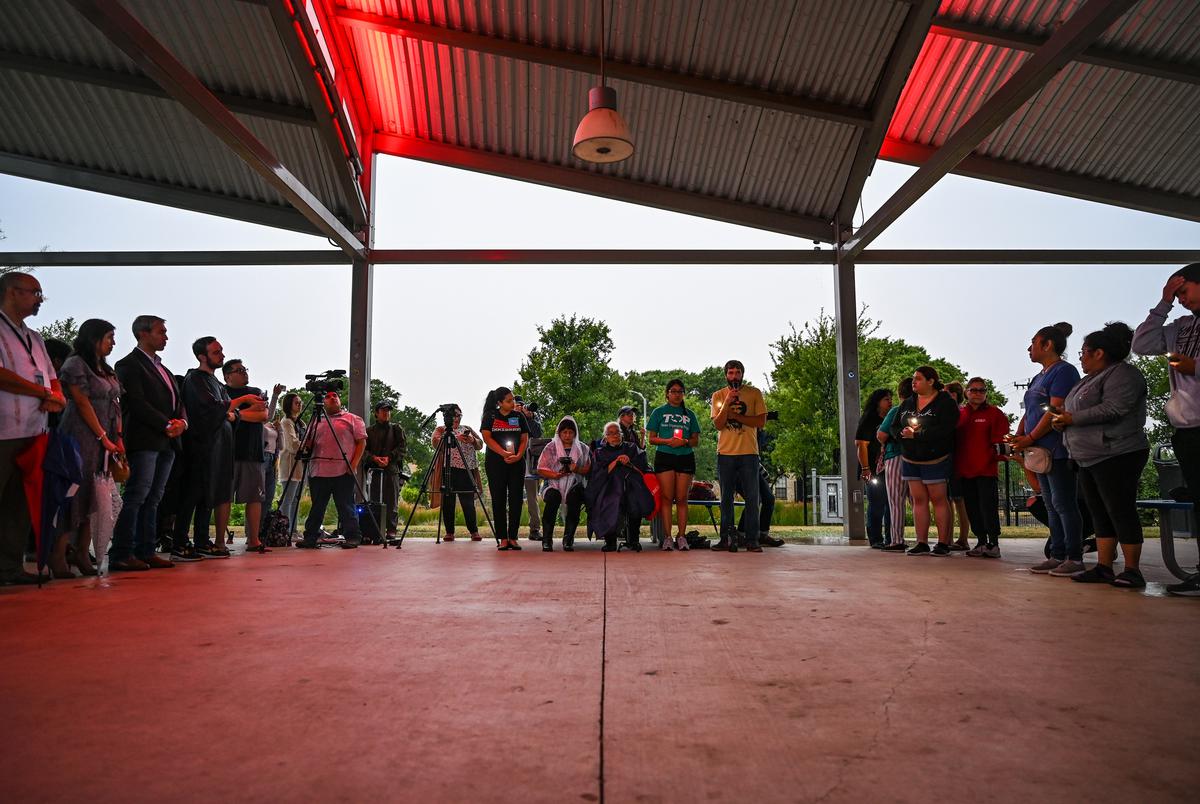 Attendees at a vigil for the 51 migrants who died gathered under a pavilion Tuesday in San Antonio’s Pearsall Park. Credit: Kylie Cooper/The Texas Tribune

“That just that hits really hard and, like, really hits close to home,” Andrea Rodriguez said while holding her puppy. “It’s sad because, you know, people just hear about it. And it goes out on the news, but we don’t see action or change.”

Paloma Arellano, whose family migrated from Mexico in 2004, was working in a food truck Monday when she heard the news. The 21-year-old said she felt a personal connection to the people who died.

“I think we’re all just kind of tired of things being so intense and being this difficult when they don’t have to be,” Arellano said. “We’ve seen how people are so damaged in their mental health because they had to go through that situation of crossing the border and go through so much trouble and the hardship” to come to the U.S.

Juany Torres was at home in San Antonio when she heard about the migrants in the trailer. She immediately took a photo of a news article and sent it to some of her loved ones.

“I am a daughter of immigrants,” said Torres, whose family is originally from Mexico. “We came together as a community and organized today because it’s so important to grieve in community and to recognize that the harm that continues to occur to people who are … our neighbors, our community, our city.”

On Monday, Gov. Greg Abbott blamed the deaths on President Joe Biden, saying that “they are a result of his deadly open border policies.”

“It’s incredibly sad to know that my state … has leadership that their first instinct is to blame and to politicize an issue of human rights,” she said. “In a way that is partisan and that further fuels vitriol against immigrants. It was just … incredibly painful to read that.” 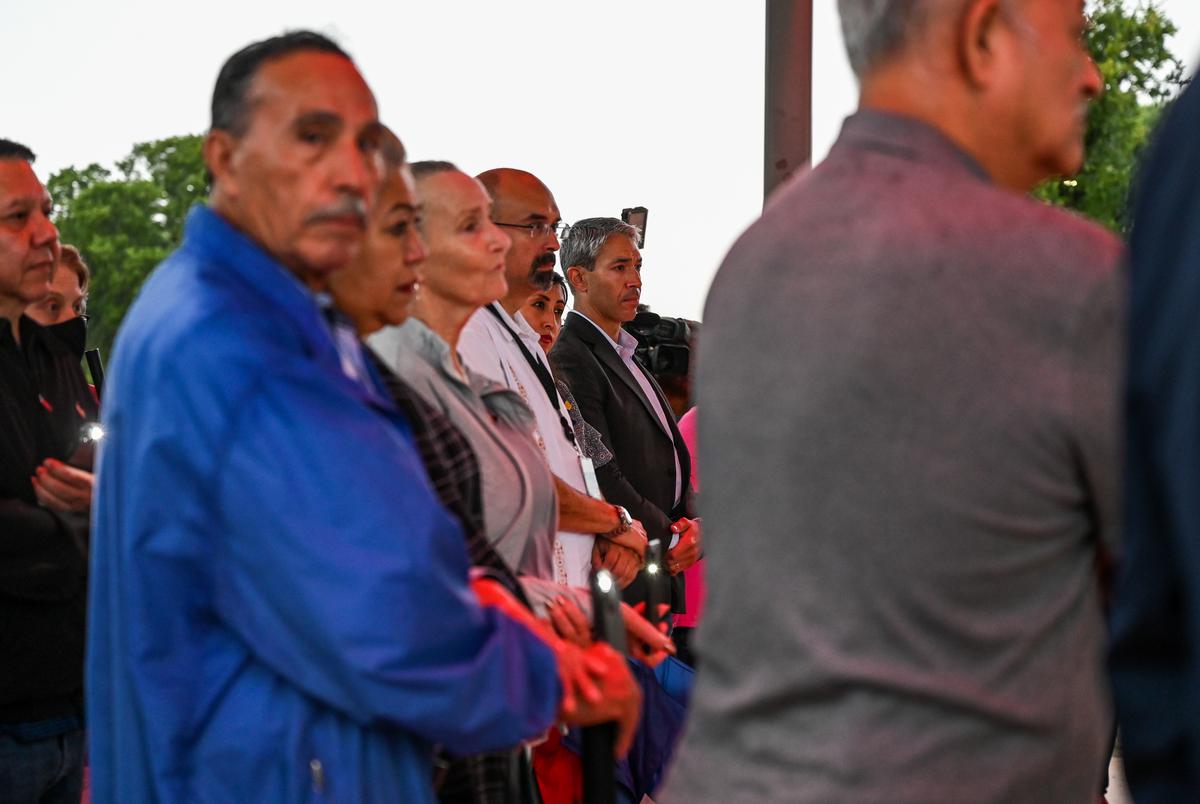 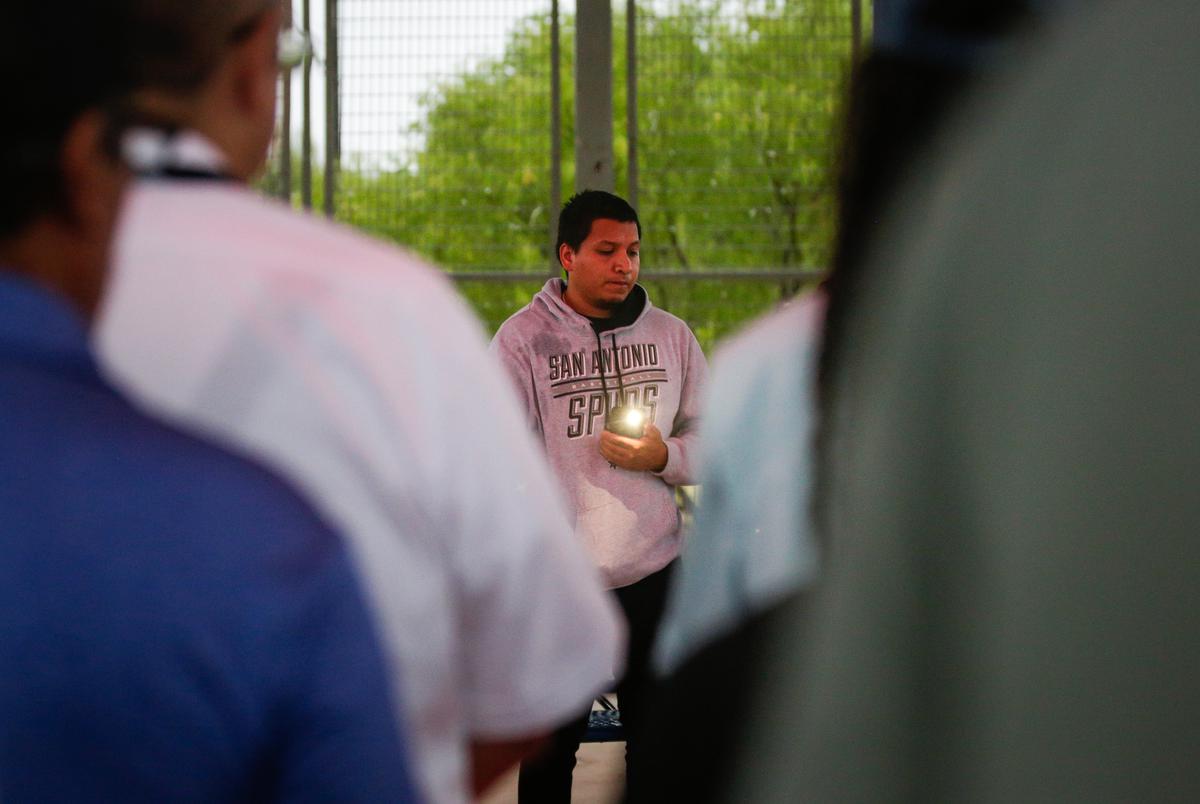 A mourner holds his phone flashlight at a vigil for the migrants found dead in an abandoned tractor-trailer in San Antonio on June 28, 2022. Credit: Kylie Cooper/The Texas Tribune

First: San Antonio Mayor Ron Nirenberg attended Tuesday’s vigil for the migrants found dead in an abandoned tractor-trailer. Last: A mourner holds his phone with the flashlight on at the vigil. Credit: Kylie Cooper/The Texas Tribune

Efrain Trevino, who is from San Antonio, said instead of pointing fingers, government officials should be working to help those who need it most.

“It’s just that they try to come over here for a better life or live better, escaping gang violence and poverty,” Trevino said. “And then they find death here in United States.”

Some in attendance said they wanted the people to be remembered as human beings with families. Others said people need to come together and advocate for change.

“I want people to honor these people’s lives by actually taking action and demanding for our elected officials to do more for the immigrant community, in their honor, in their names,” Naiyolis Palomo said. “I want people to remember their humanity.”

Join us at The Texas Tribune Festival, happening Sept. 22-24 in downtown Austin, and hear from 300+ speakers shaping the future of Texas including Joe Straus, Jen Psaki, Joaquin Castro, Mayra Flores and many others. See all speakers announced to date and buy tickets.