Graduation in Uvalde gives tragedy-stricken town a night of normality

UVALDE — Gabby Quirova asked for loose natural curls at the hair salon, which she knew could stand up to the heat and still look intact all throughout Friday’s graduation ceremony. She’d be off to college soon, at Texas A&M University-San Antonio, a place she was originally worried would be too big and confusing to navigate, but she had recently visited and loved all of the professors she met.

She fell in love with teaching during high school and her dream is to become a special education teacher.

Two other women were getting their hair done at 1 p.m. and a hairdresser sang along with a Celine Dion song. A “happy birthday” banner was strung across the mirror in anticipation of the hairdresser's birthday on Sunday.

It all felt so normal. And in Uvalde, there has been precious little normality since the shooting at Robb Elementary School exactly a month earlier that left 19 children and two teachers dead.

Graduation had originally been scheduled for May 27, three days after the shooting. Now the Uvalde High School class of 2022 was finally going to walk across the stage. Some of the 288 graduating seniors opted to forgo the ceremony and pick up their diplomas earlier, but Gabby wanted to be there. 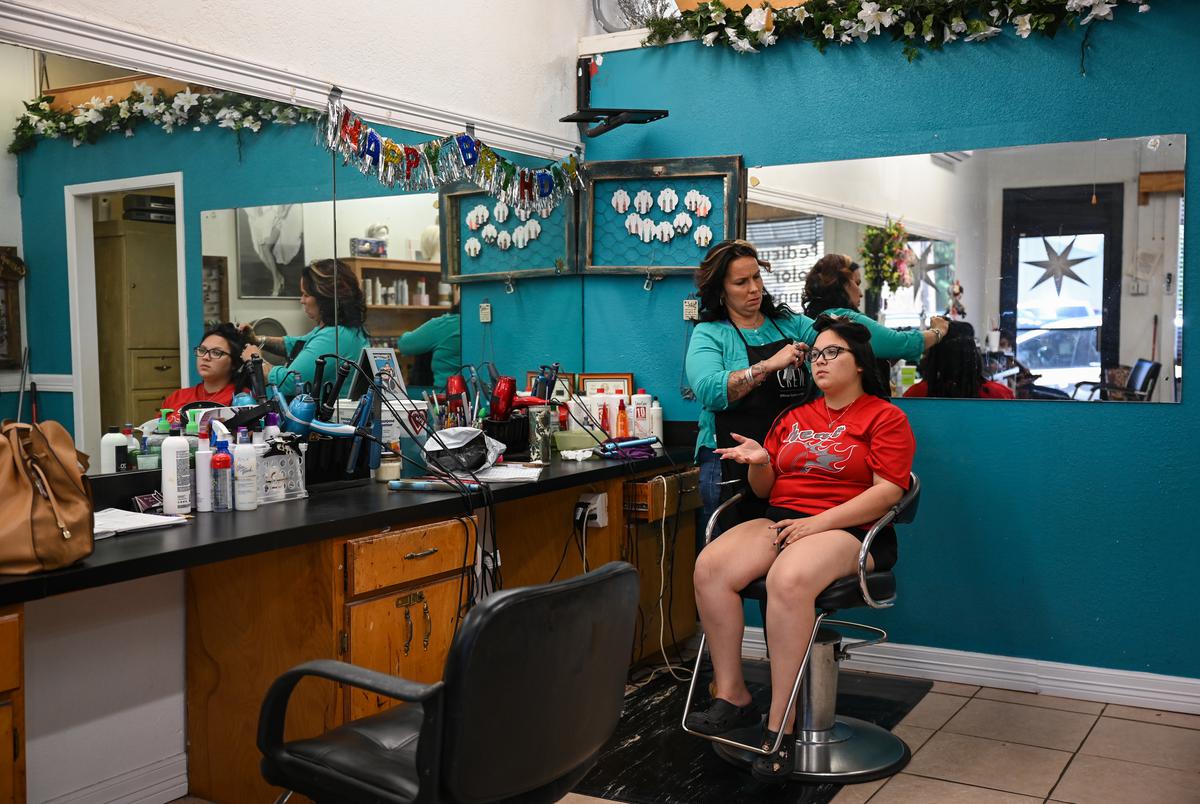 Gabby Quirova gets her hair done for graduation by Lisa Sanchez at Hair and Nail Studio in Uvalde on June 24, 2022. Credit: Kylie Cooper /The Texas Tribune 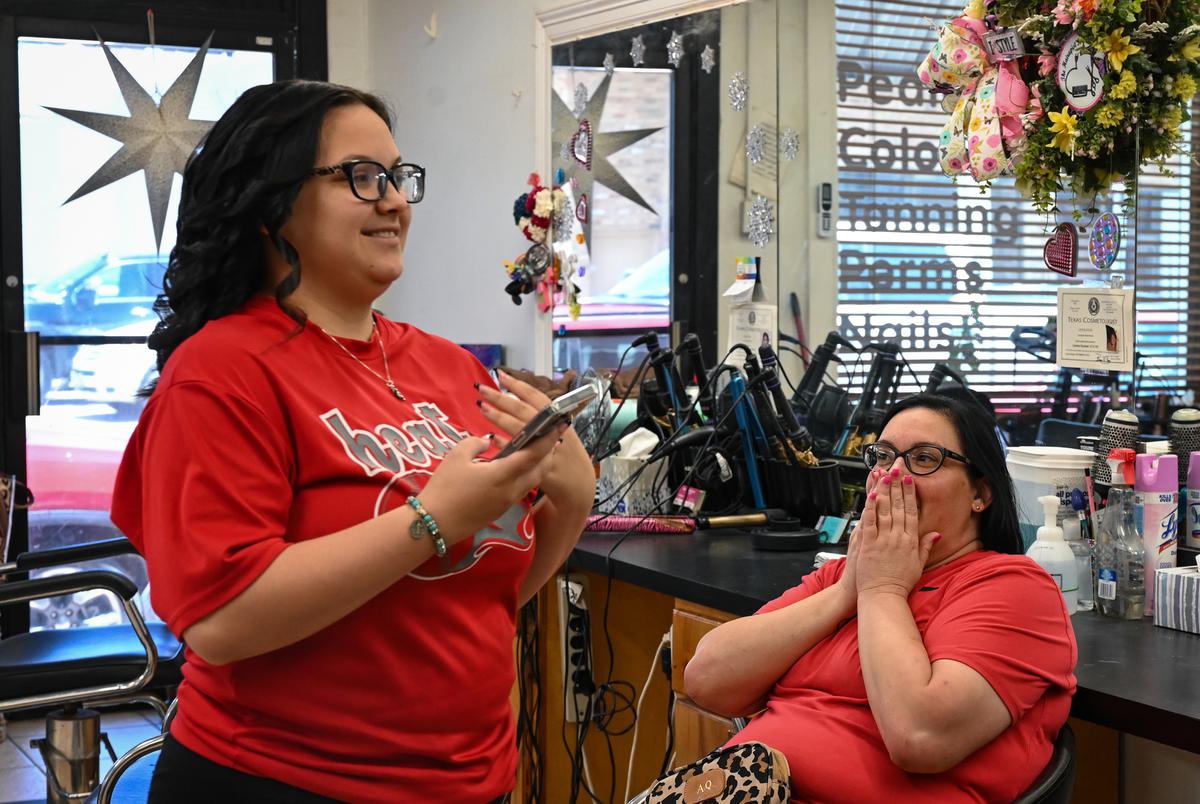 “You deserve to walk that stage,” Gabby’s mom, Ashley Quirova, told her daughter. She had arrived after Gabby to get a quick haircut. She was warm and upbeat, excited to give her daughter a day to celebrate. A day that’s not dominated by what happened on May 24.

These past few years have not been easy for the class of 2022. Many of the seniors remember an incident during their eighth grade year at ​​Morales Junior High School in 2018, when two students, inspired by the 1999 Columbine shooting in Colorado, were arrested for plotting to open fire at Uvalde High School in 2022, when they would be high school seniors.

High school has been a gauntlet of pandemic precautions and virtual school. The tragedy at Robb Elementary School has hit them all hard. Many of them had attended Robb. The 18-year-old gunman — who was killed by law enforcement to end the massacre — had been in their class before he dropped out.

The day before the shooting, Gabby joined other seniors in a local tradition: a graduation walk at Robb Elementary School. She wore the same cap and gown she would wear at graduation, as she and others high-fived the Robb students, who gave the seniors letters of support.

Gabby knew many Robb students personally — including three who died in the shooting. As part of a four-year education track at Uvalde High, she taught classes at Robb this past semester.

That hasn’t changed Gabby’s mind about her future. She wants to come back to Uvalde to teach after college. She is proud of her tight-knit community, and the shooting doesn’t change how she feels about her town.

“It’s a tragedy but not a label,” she said. “Uvalde is one heart. One whole heart. No matter what happens, we’re always going to come together.”

Samantha Quiroz, another Uvalde senior who taught at Robb, was also there for the senior walk.

“It was our last day at Robb and all of these students came up to me just like, ‘Miss Q, Miss Q!’ and it was so beautiful,” she said “I loved seeing their smiles. They were giving me so many letters.”

She has a letter from one of her former students who died in the shooting. The note said: “Miss Q., I can’t wait. I hope to see you in my classes in the future.”

“It made me cry so much but it inspired me,” Quiroz said. The shooting, she said, won’t stop her from reaching her goals and being a teacher. 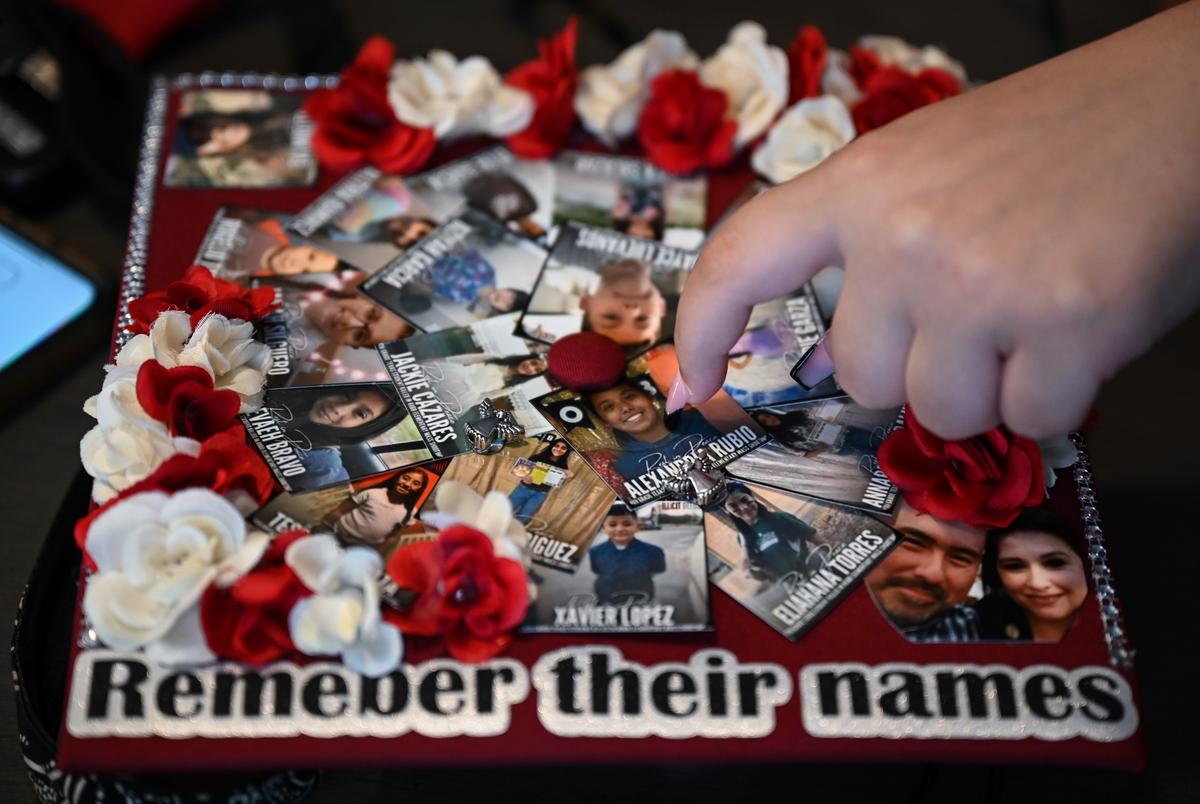 Gabby Quirova points to a photo on her graduation cap of Alexandria Rubio, one of the students she personally knew who was killed in the Uvalde mass shooting. Quirova designed her cap with photos of the victims so they could have their chance to walk across the stage, too. Credit: Kylie Cooper/The Texas Tribune

A few hours before graduation, Gabby sat at a high table in her living room while her aunt, Mary Kathleene Sprawls, did her makeup, picking pink lip gloss and sparkly gold eye shadow out of a bubblegum-colored Caboodles makeup box from the 1980s. Gabby’s favorite dog, Rosie, paced around the house while “Gilmore Girls” played on the TV with the audio turned off.

Gabby’s father, Guillermo Quirova Jr., stood watching her, still processing that his youngest child would soon be off to college. He is a retired police officer, a kind, soft-spoken man who is eager to brag on Gabby’s accomplishments in weightlifting and soccer. Every year, father and daughter help build the Uvalde High School haunted houses.

Despite the tragedy at Robb Elementary, Gabby says she is determined to become a teacher. She sometimes struggled as a student, she said, and some of her teachers took the time to help her. She wants to do the same for other children.

“What happened recently kind of gave me more of an incentive because I want to be able to protect these kids and allow them to grow up to become more teachers or maybe lawyers or principals or anything they want to be,” she said. 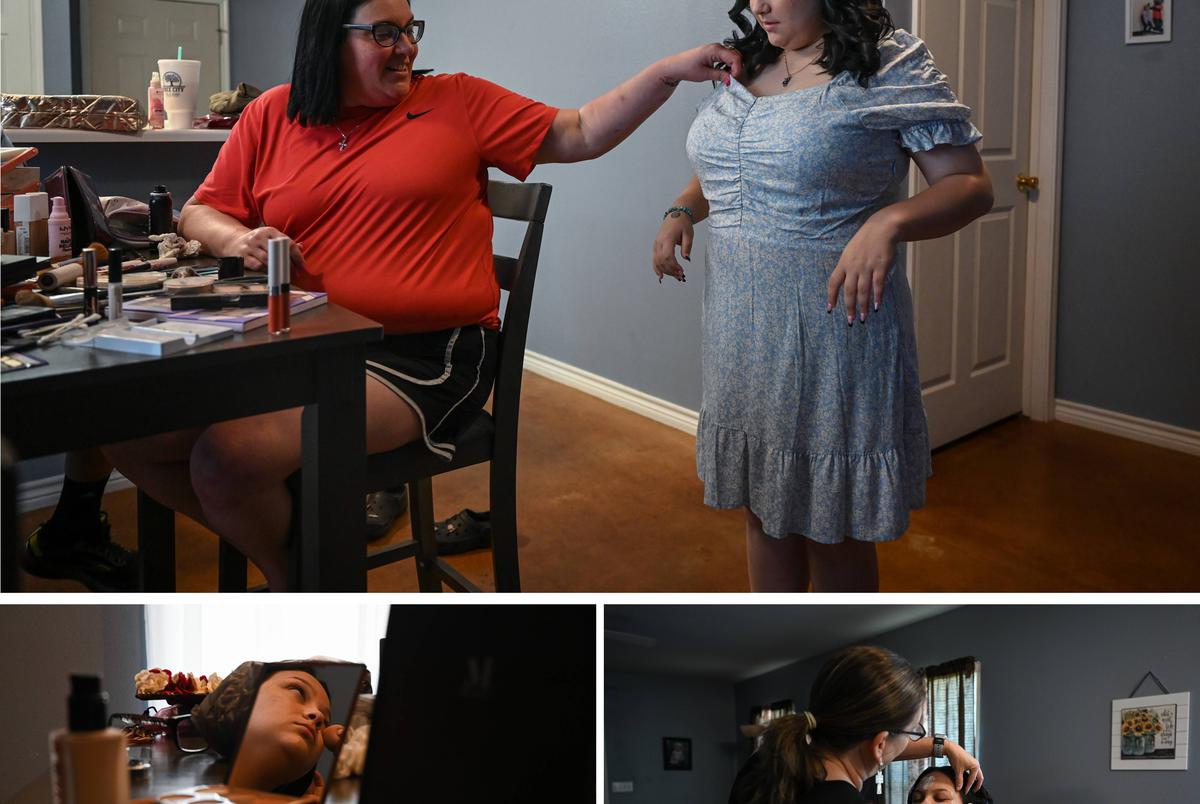 Her makeup done, Gabby put on a baby-blue spring dress with small white flowers, which she bought at Walmart for graduation day. Her mom, who works as a recruiter for two companies, was wearing a special T-shirt made by a woman in town, the front covered with pictures of Gabby. Her dad opted for a casual long-sleeve shirt.

They drove to the stadium early, arriving 45 minutes before the doors opened at 5:30 p.m. to give themselves time to navigate the extra security. The seniors were each given 10 tickets for friends and family, and no one without a ticket would be allowed in. Parents wouldn’t be able to take pictures with the graduates on the football field as they have in past years.

The graduates were prohibited from having cellphones during the ceremony, but Gabby planned to carry hers so she could reach her family quickly if needed. She also carried an AirTag tracking device that her aunt bought at Walmart so they could know where Gabby was at all times.

At Honey Bowl Stadium, two lines formed at the main entrance and wrapped around the block as state troopers and unmarked police vehicles patrolled nearby streets. People stood quietly in line with water bottles and umbrellas to shield them from the intense June sun that had pushed the temperature to 101 degrees. Some held balloons and customized fans with the photos and names of seniors; others wore maroon shirts with the words “Uvalde Strong.” After everyone was scanned with metal detectors and the ceremony began, the sun began to set, and the bleachers were enveloped in shade. 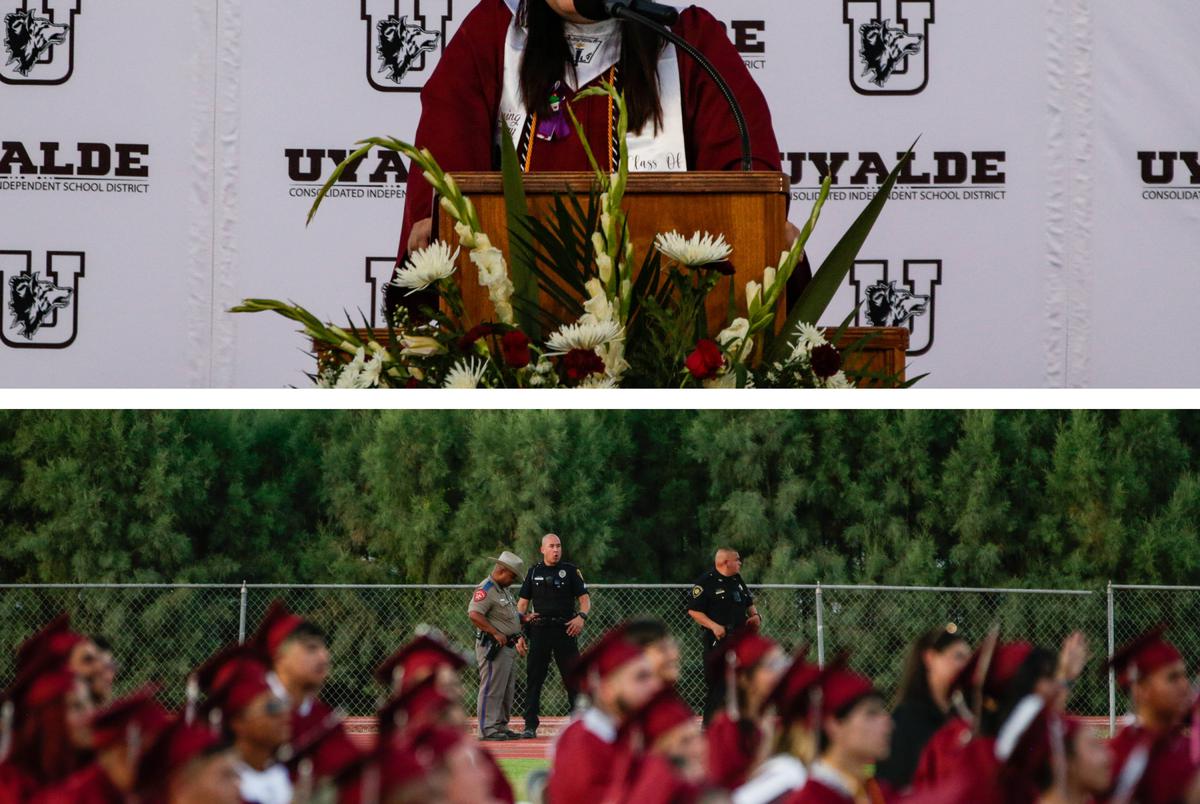 The class valedictorian, Abigail M. Kone, quoted Corinthians: “We often suffer but we are never crushed,” she said, then read the names of the children who died at Robb Elementary one by one. They now belong to the kingdom of heaven, she said.

“I would like to include these children from Robb Elementary as honorary members of the class of 2022 family,” she said.

The crowd stood and applauded, and many wiped tears from their eyes. 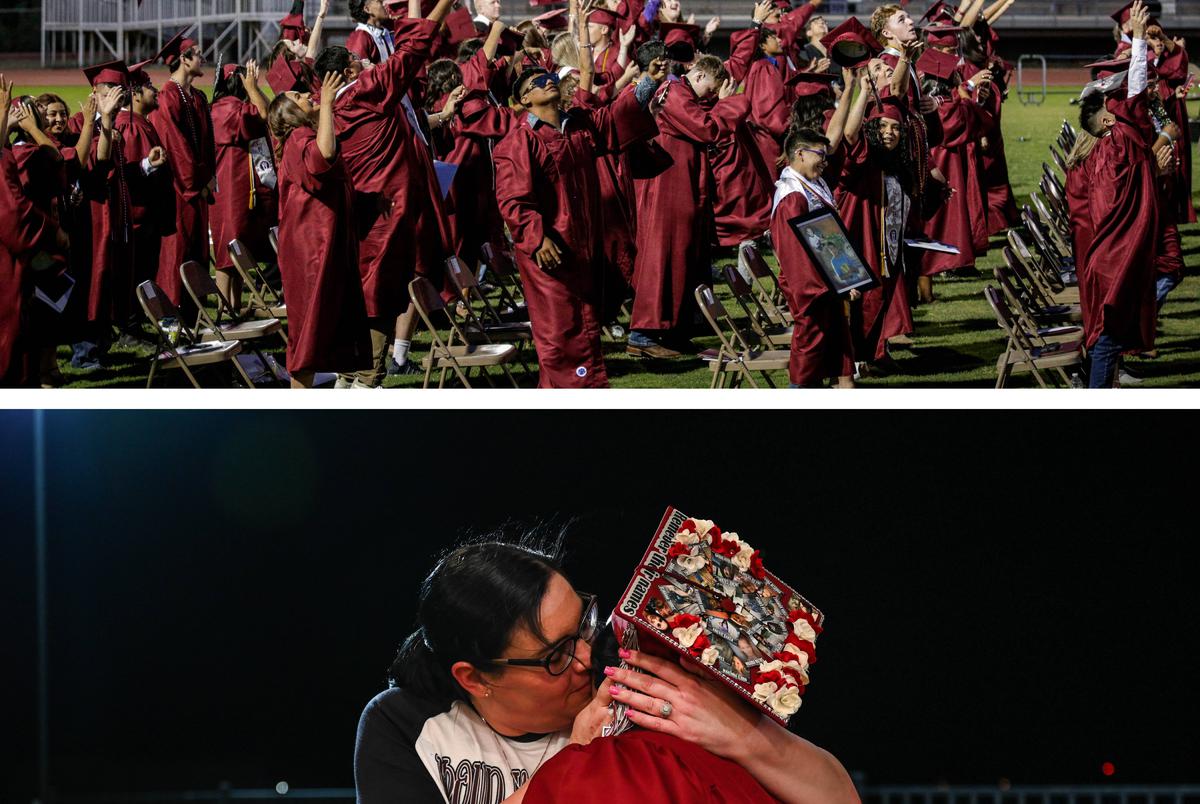 “I know these kids aren’t going to be able to walk the stage on their own, so I wanted to be able to give them that,” Gabby said.

As the sun set and the lights clicked on to illuminate the football field, each senior’s name boomed over the loudspeakers. They filed onto the stage one by one to receive their diplomas. The ceremony closed with the farewell address by senior Lynd Danielle C. Diongzon, who began crying in the middle of her speech and continued to weep through the rest of it — a moment of release.

“We came in fall of 2018, as young freshmen, scared we would walk into the wrong class,” she started as she choked up. “We will never forget those who should be with us today. ... The class of 2022 sends our love, thoughts and prayers to everyone who may have been affected by the incident that happened exactly one month ago today. Our class also asks for change, change that would prevent any other tragedy whether it is at a school, grocery store or concert.”

Afterward, Gabby’s family and friends gathered at Hangar 6 Air Cafe for dinner. It’s housed in an old World War II airplane hangar that’s still operating and offers $10 off any burger with the purchase of $100 of jet fuel. They had rented the whole outdoor patio, lit up with overhead lamps. A dozen family members and friends sat at a long table with baskets of fried pickles and iced teas and sodas.

Gabby and her cousin, Andrea Serna, cried as they posed for photos with their diplomas, sad to be leaving each other soon.

Then they showed off the matching tattoos they got on their ankles two days after the shooting at Robb Elementary — an outline of the state of Texas with a small red heart right over Uvalde.

Disclosure: Texas A&M University has been a financial supporter of The Texas Tribune, a nonprofit, nonpartisan news organization that is funded in part by donations from members, foundations and corporate sponsors. Financial supporters play no role in the Tribune's journalism. Find a complete list of them here. 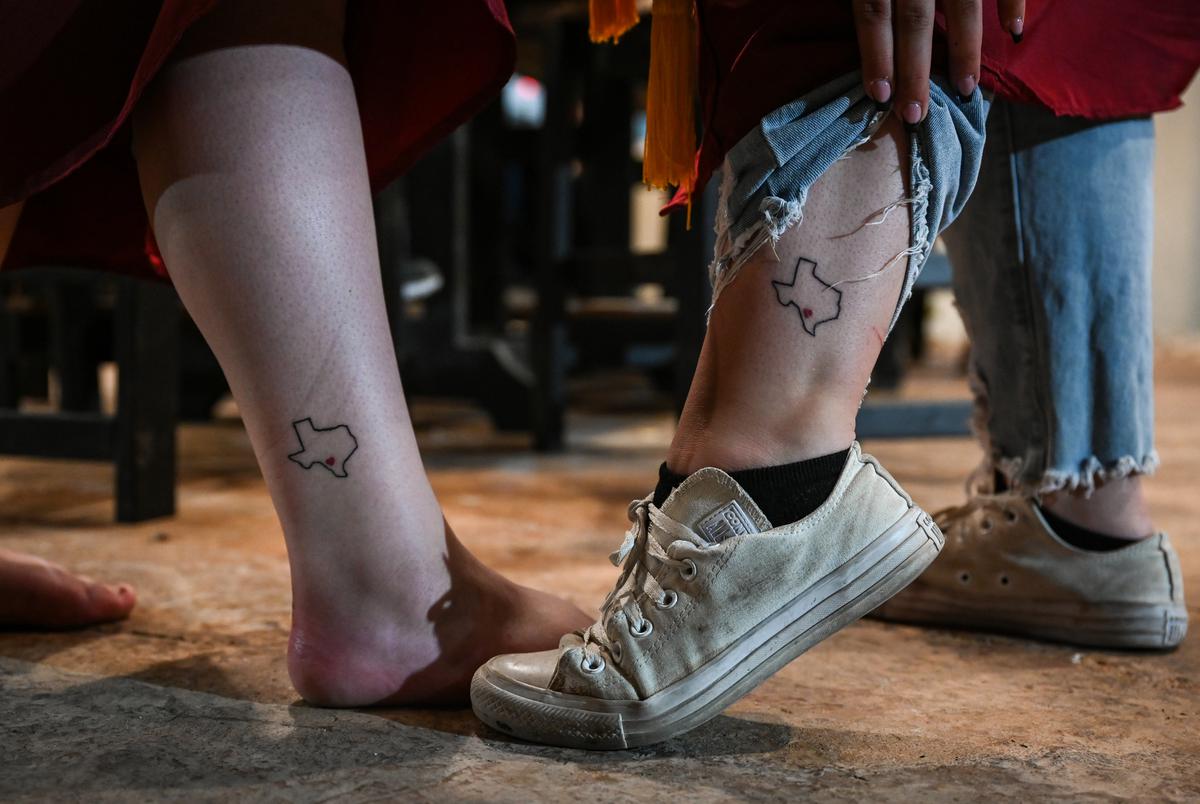 Gabby Quirova and her cousin Andrea Serna showed off their matching tattoos of Texas with a heart where Uvalde is located. Credit: Kylie Cooper/The Texas Tribune