She survived the Santa Fe shooting, then visited Uvalde to comfort the newest members of a growing circle linked by tragedy

This year, she and her husband, Scot, packed up their RV south of Houston and drove west to hike and camp in the West Texas mountains, where cell phone service can be spotty.

Being able to hike is a thrill for Rice, who on May 18, 2018, was shot in her legs six times when a gunman opened fire inside Sante Fe High School, where she worked as a substitute teacher.

“Every step I take is for the people we lost that day,” Rice said.

During this year’s anniversary trip in Big Bend National Park when the Rices regained cell reception, they saw the news from Uvalde, which was on their route home. They decided to make a stop.

Flo Rice still can’t be in crowds or around loud noises and she knew she couldn’t visit Robb Elementary School, where an 18-year-old gunman killed 19 students and two teachers on May 24. Four years later, she still avoids driving by Santa Fe High School, which is minutes from her home.

They attended a vigil in Uvalde and lingered in town, talking to some of the locals.

“I went into various shops and just told them who I was and that I was sorry,” said Rice, 59. “I just wanted them to know someone who had been there, been through it, understood what they were going through. Because they were just in shock.”

The Uvalde community is now forever linked to people like Rice and to places like Santa Fe, Parkland, Newtown, Columbine and many other small places in America that are part of a growing catalog of carnage. 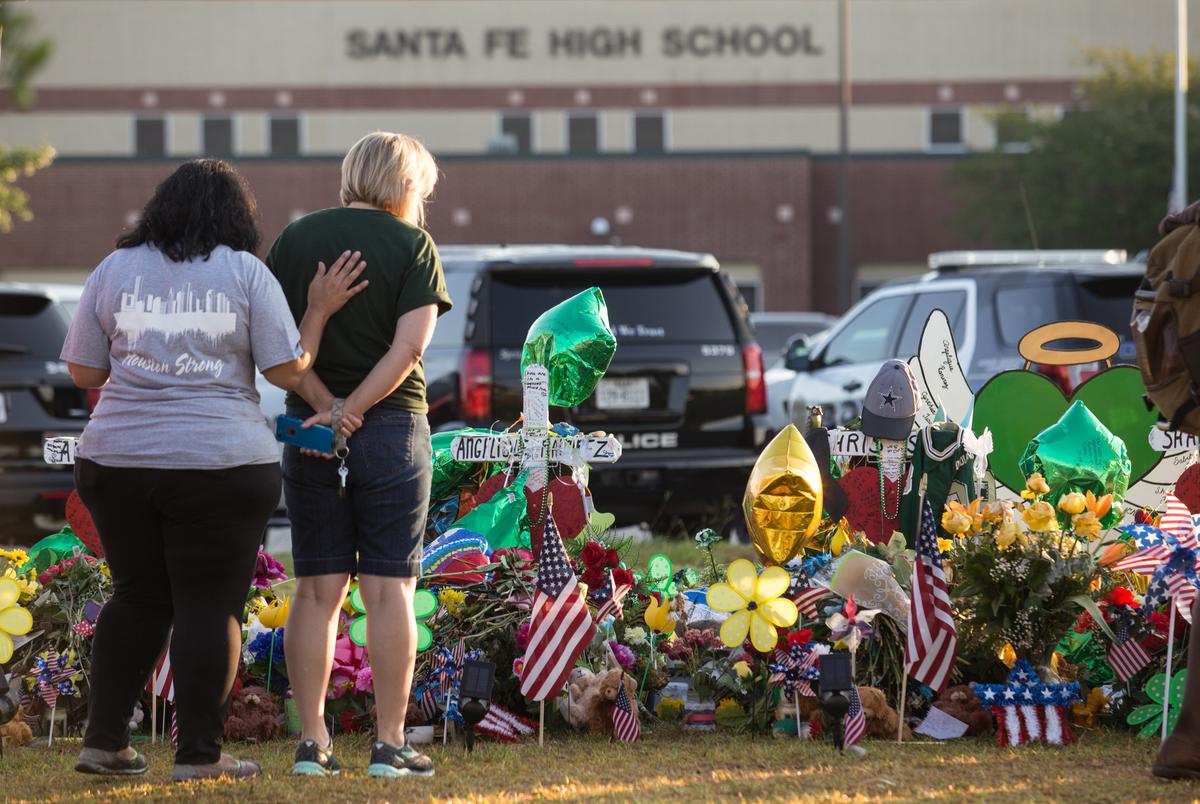 People pay their respects to a makeshift memorial in front of Santa Fe High School on May 29, 2018, eleven days after 10 people were killed in a mass shooting. Credit: MICHAEL STRAVATO
Ad 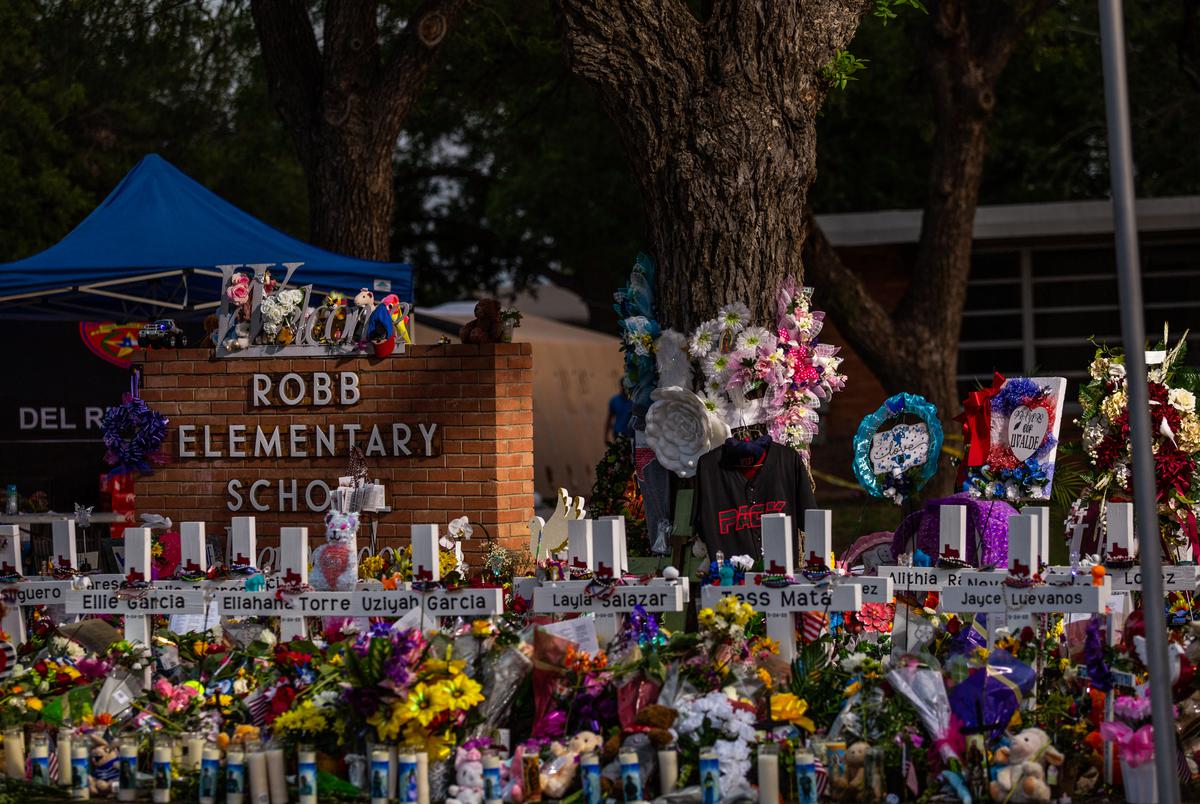 Hundreds of people wait in line holding flowers and each other to pay their respects at a memorial in front of the Robb Elementary School on Saturday, May 28, 2022. Credit: Kaylee Greenlee Beal for The Texas Tribune

First: People paid their respects at a makeshift memorial in front of Santa Fe High School on May 29, 2018, eleven days after 10 people were killed in a mass shooting. Last: Hundreds of people waited in line to pay their respects at a memorial in front of the Robb Elementary School in Uvalde on May 28, 2022. 21 people were killed in that shooting. Credit: First: Michael Stravato for The Texas Tribune|Last: Kaylee Greenlee Beal for The Texas Tribune

Rice knows what comes next. Uvalde residents demand answers, and they get a confusing, shifting account from authorities of what happened at the school. Some will join the chorus of people — including Rice — from communities that have suffered mass shootings, demanding that governments improve security at schools, reform gun laws or fund more mental health resources for children.

After Rice survived the rampage by a 17-year-old student that left eight students and two of her fellow teachers dead, Gov. Greg Abbott and other Texas leaders visited her hospital bed. Rice was surprised by the visit — she said she was so oblivious to politics that she didn’t realize Abbott used a wheelchair.

Abbott promised her he would work to address mass shootings. She said Abbott invited her to the governor’s mansion that December, where he reassured her that the state would make progress to prevent future mass shootings.

“We had a private meeting at the Governor’s Mansion. He assured me that having a commission was going to be a priority for him,” Rice said, referencing what Florida leaders did after a 19-year-old murdered 17 people at a high school in Parkland just months earlier. “But then, nothing. Just crickets. We haven’t heard a thing. And every time we kept trying to follow up, we just didn’t get a response.”

A formal government review like the one Florida leaders conducted after Parkland would help survivors, the community and the rest of the public heal, Rice said. Instead, she said, there are still unanswered questions about what happened at Santa Fe High School in May 2018.

After the Santa Fe massacre, Abbott invited the heads of the Department of Public Safety and Texas Education Agency — both of whom are still in those jobs — as well as local school officials, law enforcement agencies, experts on school design and students from the school to a series of roundtable conversations that ended with the participants giving Abbott and Texas lawmakers suggestions about how to prevent school shootings.

The following year, Abbott signed into law bills passed by state lawmakers aimed at strengthening mental health care for children and allocating state money to school districts that could be used to “harden” their campuses with things like physical barriers and security cameras.

The legislation addresses “not only the tragedy that took place at Santa Fe,” Abbott said at the bill signing in 2019, “but will do more than Texas has ever done to make schools safer places for our students, for our educators, for our parents and families.”

Rice is still critical of the state’s follow-through on what leaders promised. Schools didn’t receive enough money to make the types of physical improvements Abbott and lawmakers have touted publicly, according to a Texas Tribune review. And while the legislation required school districts to develop active-shooter plans, many school districts also either don’t have an active-shooter plan or produced insufficient ones.

Abbott’s office did not reply to a request for comment for this story.

Since the Santa Fe shooting, Rice has met other shooting survivors from across the country, and many have been disappointed by government response so they have turned to each other for support.

Rice has already seen Uvalde survivors joining the online community of mass shooting survivors who have rallied to help each other in a Facebook group that grows by the day.

Rice said she didn’t know the group existed until she qualified for membership.

“That has been a lifesaver for me,” she said. “It doesn't get political — they're just totally there to support people. Because I thought I was losing my mind, all the things I was going through, the way I felt with my PTSD.”

Rice said the group’s support — they tell each other about their nightmares, they warn each other when news breaks about new mass shootings — and the friends she has made across the country have helped her maintain a sense of community, even as the community where she lives has tried to move on from the tragedy.

Battling bad information after a shooting

The Rices watched U.S. Sen. Ted Cruz speaking in Uvalde, and he mentioned Santa Fe. He said the gunman in Santa Fe entered the school through a back door, making the argument that schools should have one door as an entry point as a way to prevent more mass shootings.

Rice said she and others who were in the building that day know the gunman entered through the front door before making his way to the art rooms and opening fire. Rice said Cruz’s comments are another example of bad information about a mass shooting lingering for years.

Already in Uvalde, officials’ story about what happened has changed. Early on, the state police said a Uvalde school police officer had “engaged” with the shooter outside of Robb Elementary and that a teacher had propped open a door that the shooter used to enter the school. Days later, the agency backtracked and said the officer never encountered the shooter and that a door lock had failed.

Understanding the facts of a mass shooting is essential to helping survivors and the community move forward, Rice said. Unanswered questions allow disinformation and rumors to flourish — such as the belief that the Santa Fe shooter entered the school through a back door.

“He came in the front door just like everyone else, with his trench coat on, with all of his evil swastikas and ‘born to kill’ shirt,” Scot Rice said. The accused shooter was recommitted to a mental health facility earlier this year and no trial date has been set.

“The problem is the wrong information gets out there and it sticks in people’s heads,” Flo Rice said. “Cruz didn’t even have the right information but he didn’t realize it had been corrected. It’s misinformation that perpetuates.” 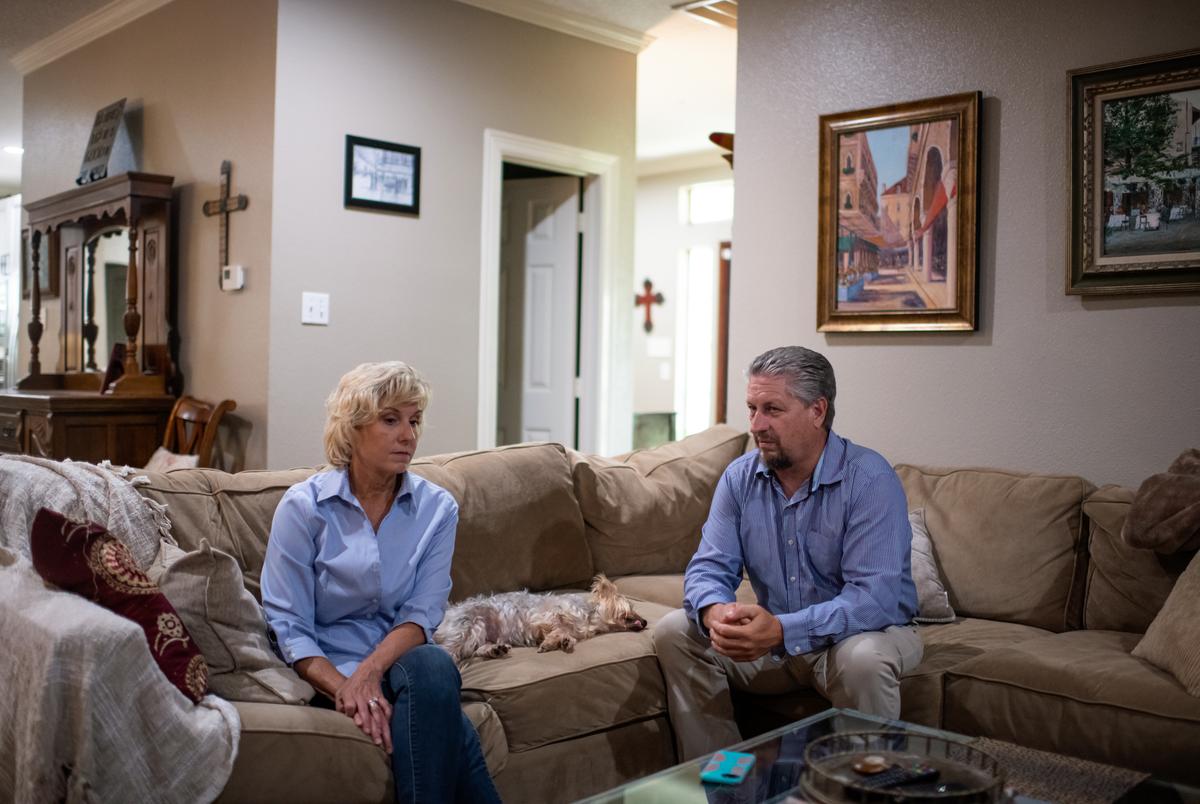 Flo Rice and her husband Scot Rice at their home in Santa Fe on June 2, 2022. Credit: Mark Felix for The Texas Tribune
Ad

Uvalde was not the first time the Rices have visited a mass shooting site.

They flew to Parkland in March 2020 and saw the school fenced off in preparation for eventual demolition.

In Uvalde, some students, parents and staff said they don’t want to return to the elementary school. The federal government might even demolish the school.

“They said they’re going to tear it down,” Flo Rice said, “and I think that is great.”

Four years later, just the sight of Santa Fe High School haunts Rice and some other survivors she knows. She said many teachers and some students have left town since the shooting.

They’re inspired by John Barnes, one of two police officers inside Santa Fe High School that day and the only other adult who was shot and survived. Barnes, who was forced to retire because his shooting arm was permanently damaged by the gunman, said he can’t lift anything over 20 pounds.

He still gets choked up at times discussing the Santa Fe killings, but he says he’s not leaving the area.

Barnes said the Uvalde tragedy should be yet another warning for schools to be better protected, either with police officers in the building or arming teachers who are willing to serve as school marshals.

“Why do you think it is that the White House is supposed to be impenetrable, but there’s a shit-ton of Secret Service guys there with handguns?” Barnes said. “Just in case somebody gets inside with a weapon. Why in the world do we think that's OK, but we look at schools differently?”

But now that’s someone else’s fight. Barnes has a new career as a long-haul trucker.

“I am so blessed,” Barnes said in a telephone interview. “I’m in a national forest right now. Pulled over to take a beautiful picture here in Arizona. I was about to post the view of my office today. It’s been a hoot being in this truck, man. This country is just gorgeous.”

When the Rices pack up their RV for their anniversary trips every May, they say they also are looking for a new place to live. Now that their five children are out of the house, the Rices say they’re ready to leave Santa Fe. They’re just not sure where they’ll go.