Uvalde buries 10-year-old Amerie Jo Garza, the first of many funerals to come

UVALDE — She had three names joined like charms on a bracelet.

Amerie Jo Garza was laid to rest Tuesday before the eyes of God, her broken family, a shattered town and a shamed nation. It was three weeks to the day after her 10th birthday.

On a sunny Tuesday afternoon, her funeral Mass at this small town’s Catholic church began a procession of grief that will stretch across two weeks as services are held for 18 of her classmates and two of their teachers killed at Robb Elementary a week ago.

The mourning will include at least two joint funerals and services for two sets of cousins because the slain children were often family as well as classmates.

Amerie’s body arrived Tuesday afternoon at Sacred Heart Catholic Church, a 114-year-old parish in a quiet neighborhood about a mile from the elementary school. Its sanctuary backs into a broad canopy of old oak trees offering shade to a statue of the Virgin Mary. She stares out at just one of the many memorials around town for those lost at Robb — 21 framed pictures hanging from a metal barricade with stuffed animals and flowers for all the children.

Mourners began arriving as early as an hour-and-a-half before the start of Mass, some wearing black but many dressed in shades of lilac and lavender — Amerie’s favorite color. Media were kept across the street.

A silver hearse pulled up to the church shortly before 2 p.m., and Amerie’s family followed in a matching car. Six pallbearers wearing white gloves with pink flowers pinned to their white button-up shirts carried the casket — gray with a hint of lilac — through the church’s wooden doors, past two flower pots in which stems of lavender echoed the tribute of purple.

Some of her family walked ahead, donning delicate corsages. Dozens of others followed, spilling out of the church as officials worked to make space among wooden pews for all who had gathered.

After the Mass, Amerie’s procession made the short drive to Hillcrest Memorial Cemetery, where mourners stepped through gaps in the hedge of sage bushes that line the grounds toward the spot that would become her gravesite. A few hundred had gathered, enveloping her family around the casket for a short burial ceremony. Then her body was lowered into the ground.

When most of the mourners had dispersed, her family released a bouquet of white dove-shaped balloons to the wind.

In the days since the shooting, Amerie’s loved ones — like families of the other children — remembered her not for the last day of her life, but for everything that came before.

Amerie had been kind but sassy, her family describing her as a little diva with a heart of gold. She had loved and been loved, smiling slyly in photos embracing her parents and doting on her little brother Zayne from the start.

She dreamed of channeling her creative energy into becoming an art teacher. The day after her death, her mother, Kimberly Garcia, posted a picture of Amerie holding up a certificate in recognition of joining the A-B honor roll. “You did not deserve this my sweet baby girl,” her mother wrote. “Mommy needs you, Amerie I can’t do this life without you.”

Amerie was also brave and stood up for others. 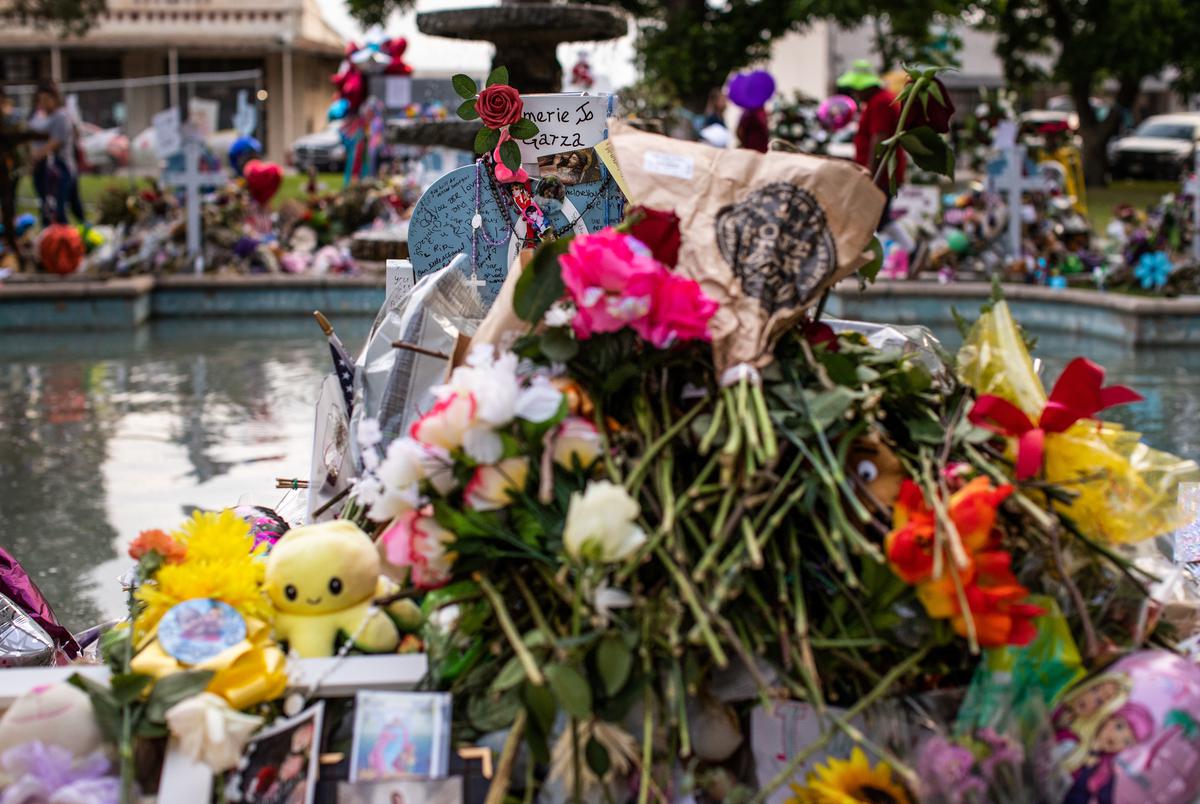 As her family received mourners at a funeral home Monday, the Treviño family visited the town square where white crosses around a fountain have become a memorial visited daily by anguished locals and out-of-towners who make the solemn trek to pay their respects.

The assortment of daisies, mums and roses left in front of the cross bearing Amerie’s name was stacked so high that the pyramid threatened to topple over the border of white prayer candles enclosing the tribute.

David Treviño, his wife and 11-year-old daughter held vigil Monday before Amerie's memorial, the young girl's body shaking with sobs as she rested her head on her mother’s shoulder.

Standing tall for her age, the 11-year-old had faced severe bullying from some of the other children at Robb Elementary, Treviño said. Where the family had struggled to find help to shield her, Amerie stepped in to wrap her in her protection.

“She would stick up for her for the bullies to stop picking on her,” said Treviño who was also Amerie’s cousin. “[My daughter] is taking it really hard. She would protect her from the bullies.”

The day before Amerie's funeral, a visitation including an evening rosary was held at the funeral home across the street from Robb Elementary. Some mourners wore purple there, too. Others carried bunches of purple hydrangeas.

Some were strangers who stopped by simply to say a prayer for her. Others wore shirts with photos of Amerie smiling at all who passed them on their way in.

Even in death, Amerie continued giving to others. The children who attended early in the day appeared to each walk out clutching brown teddy bears.

The Hillcrest Memorial Funeral Home, which neighbors Robb Elementary and had in the past had brought stacks of pizza for students to celebrate the last day of school, last Tuesday sheltered children who fled for their lives across Geraldine Street to reach the building’s doors amid the shooting.

At the end of this school year, the funeral home’s staff is helping prepare the bodies of the slain children. They helped families choose coffins that seemed unfathomably small. They printed out prayer cards with dates that barely spanned a decade of life. They set up recitations of the rosary so parents could offer their children’s souls as they prayed for their eternal rest alongside God. 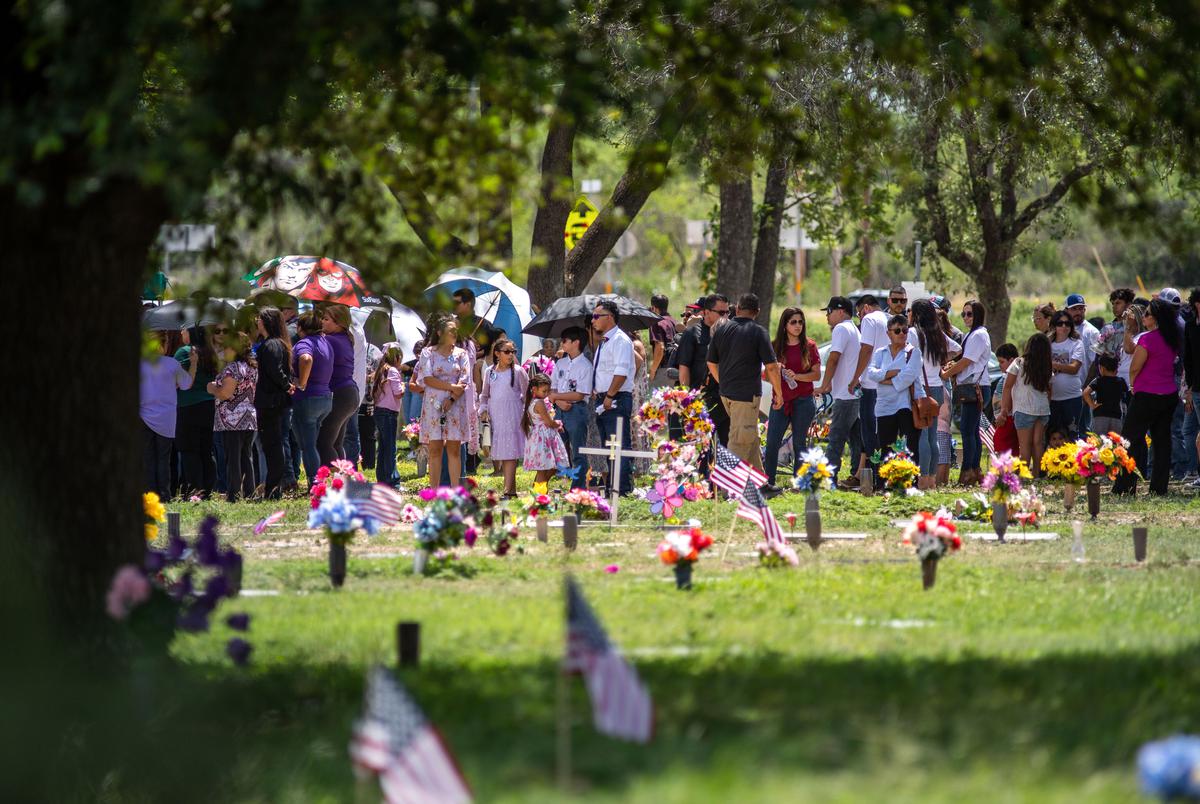 Hundreds of people laid Amerie Jo Garza to rest at the Hillcrest Memorial Cemetery in Uvalde on Tuesday. Credit: Kaylee Greenlee Beal for The Texas Tribune

From the funeral home, families and mourners can see the back door the shooter used to slip inside the school. A row of open windows through which children escaped also faces the funeral home, the printed curtains that adorned one classroom window fluttering with the breeze.

To begin washing away the horror, there have been countless gestures of sweetness over the past days.

Clinging to her cross at a memorial, balloons marked the 10th birthday Ellie Garcia would’ve reached on Saturday. A purple softball mitt with pink stitches was left atop a stack of flowers for Eliahna Torres, who wore the number four on the softball field.

At Uvalde's second funeral home, loved ones Monday remembered 10-year-old Maite Yuleana Rodriguez on the first of two days of visitation. Maite had long ago set out to become a marine biologist, and her preference for the color green was apparent in her affinity for lime-green Converse shoes.

As the sun finally dipped enough to offer them some shade, a pair of boys took turns juggling a soccer ball outside the funeral home. They sported lime-green shoes.

The overlap of visitations for Amerie and Maite captured the relentless march of grief that will follow — one child being buried while another family holds visitation while another prays the rosary and on and on.

As Amerie’s body was being lowered into the ground, the Garcia family was beginning to receive mourners at a visitation for Irma Garcia, one of the teachers who died in the shooting, and her husband Joe who suddenly died just days after losing his high school sweetheart.

This week alone there will be 11 funerals. Maite’s funeral service will take place Tuesday night.

All the while, a shiny purple bow will adorn the mailbox outside a home just down the street from the Hillcrest funeral home.

The house belongs to another devastated Robb family, waiting its turn to bury the child who never came home.