The impact of technology on small businesses

Nutrition tips: What should you pack in your child’s lunch box?

‘We will be reunited with them one day’: Uvalde worshippers pray for peace, healing and the souls of 21 lives lost

UVALDE — On Sunday morning, Cleo and Zeke Hernandez, 75 and 80, celebrated Mass at Sacred Heart Roman Catholic Church for the first time in two and a half years. They had stopped attending after Zeke had surgery.

But this Sunday, Uvalde was different — and so were they. The couple came to church to begin to heal. Faith might offer peace or rebuilding, they thought.

“We just lean on God,” Cleo Hernandez said as she walked into the church with her husband. “He will take care of us.”

It was the first Sunday worship in Uvalde since a gunman took the lives of 21 people — two educators and 19 children — at Robb Elementary School on Tuesday in the deadliest school shooting in Texas history, and the second deadliest in the nation’s history.

Churches throughout this mostly Latino city of 15,000 opened their doors to a steady stream of worshippers, whether regulars, newcomers or lapsed congregants and parishioners. Some, like the Hernandezes, had not been to church in years. Others said they come every week but that this week especially they needed to pray for the families of the victims. 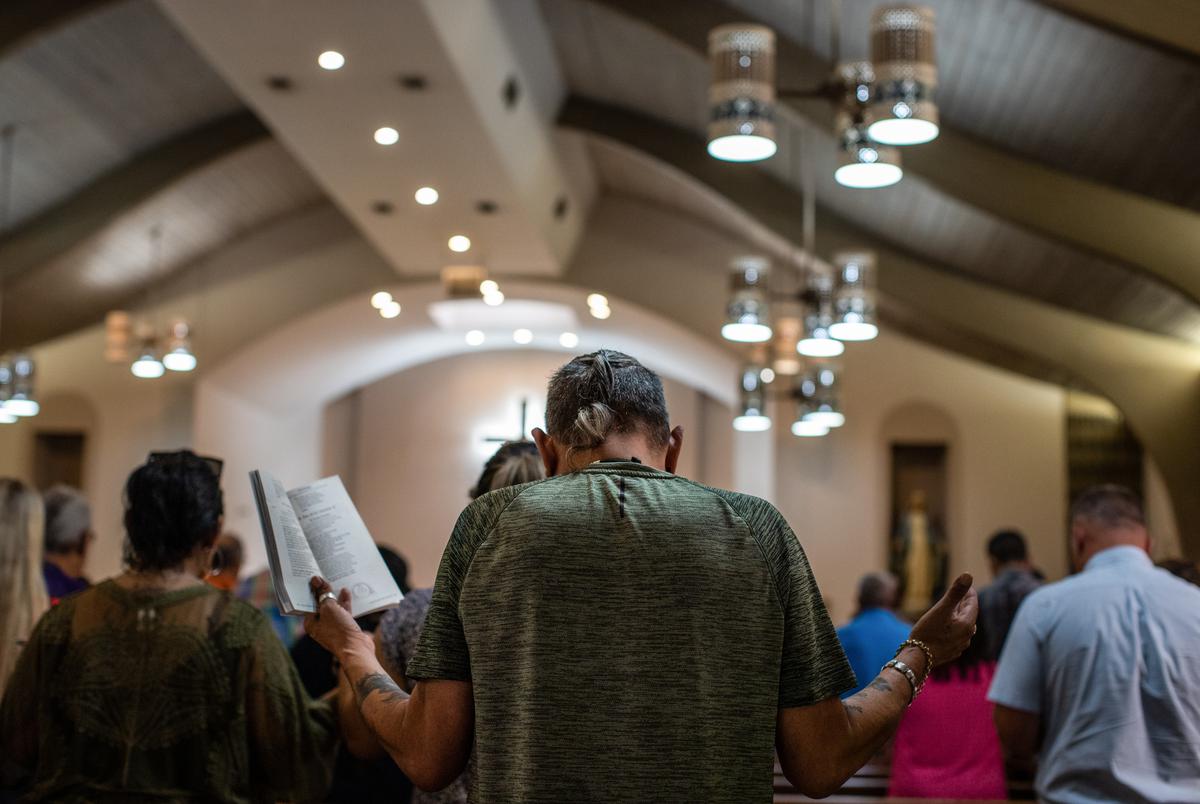 Sacred Heart, a 114-year-old parish, was a somber scene as parishioners entered. Many entered to pray for the victims of the shooting. They said they were searching for the peace that perhaps only God can give. They knelt, they cried, they embraced.

“[People] are suffering right now after that tragedy, but I will keep on praying for them,” said Minerva Gonzalez, 77, of Uvalde.

President Joe Biden, who is Catholic, attended Sacred Heart’s noon Mass Sunday with his wife, Jill. The president and first lady came from the memorial site at Robb Elementary School. After Mass, they left to meet with the families of victims and survivors of the massacre.

It was the second time this month that Biden had had to lead the nation in bereavement; 12 days earlier, he had traveled to Buffalo, N.Y., where a racist gunman killed 10 people at a supermarket. 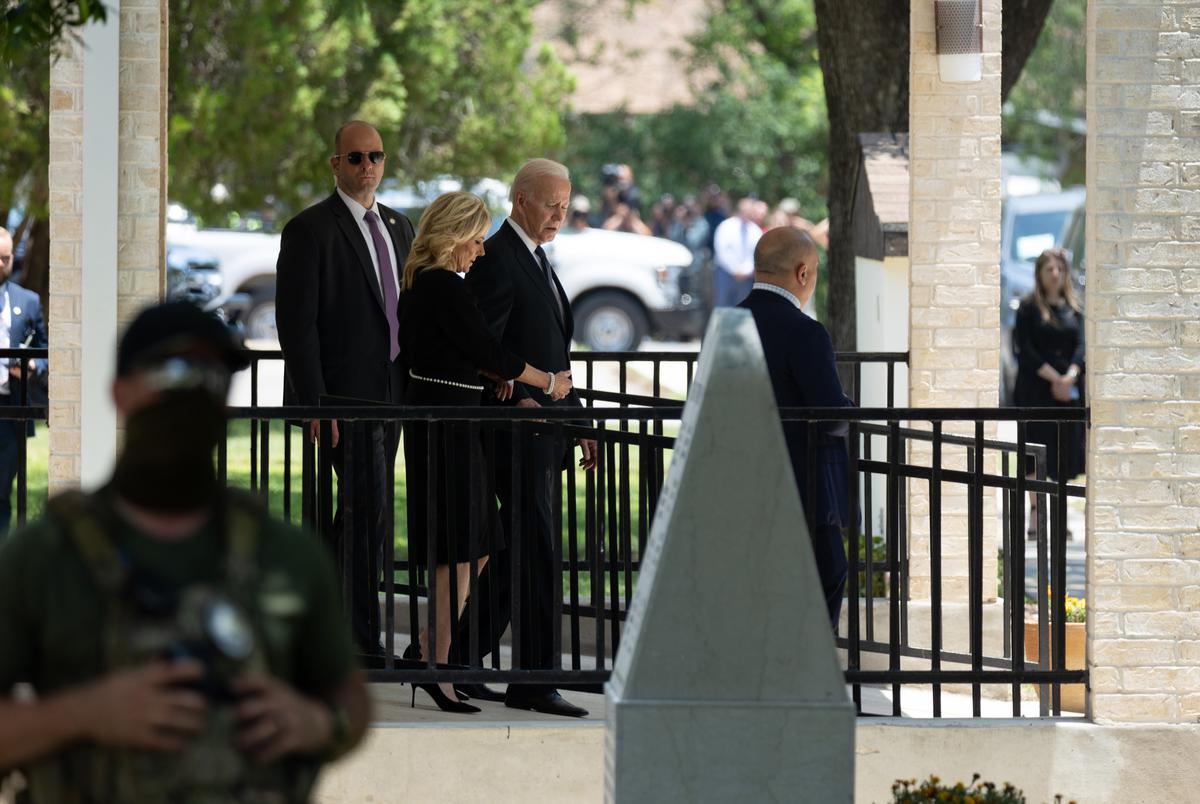 President Joe Biden and first lady Jill Biden leave noon Mass at Sacred Heart Church in Uvalde on Sunday. Afterward, they met with the families of victims and survivors of Tuesday’s massacre. Credit: Evan L'Roy for The Texas Tribune

Uvalde, a town a little more than an hour’s drive from the U.S.-Mexico border, is home to at least a dozen houses of worship. Some of the churches in Uvalde — a town with a documented history that goes back at least to the mid-1800s — are more than a century old. Sacred Heart Roman Catholic Church was founded in 1908. One Baptist congregation, Primera Iglesia Bautista, was founded in 1909, a retired minister of the church told NPR.

​​San Antonio Archbishop Gustavo García-Siller presided over the noon Mass of more than 600 parishioners, including the president and his wife. The service focused on the children in attendance. In both English and Spanish, García-Siller told Uvalde children they would help their community heal.

And a few hours earlier, at the 9 a.m Mass at Sacred Heart, the Reverend Eddy Morales centered his sermon on celebrating the lives of the ones lost and in that way, keeping their spirits alive.

“Do not allow yourself to let death take you into darkness,” Morales said. “Let's celebrate love, joy, peace and be there for one another just as Jesus continues to be with us.”

Juan Antonio Santos, 64, who has lived in Uvalde for almost his entire life, said he, like other worshippers, believed that only God could comfort a community in collective grief. Still, he also wants accountability; there needs to be a full investigation into the shooting, he said.

Faith leaders were frank about the community’s trauma. Gary Janak, an auxiliary bishop of San Antonio, said there were no words that could ease the pain. Instead, he called on the community to support one another with actions.

“We always have a lot of words, but I just think a hug or holding their hand or saying a prayer with them is more effective than anything else,” Janak said. 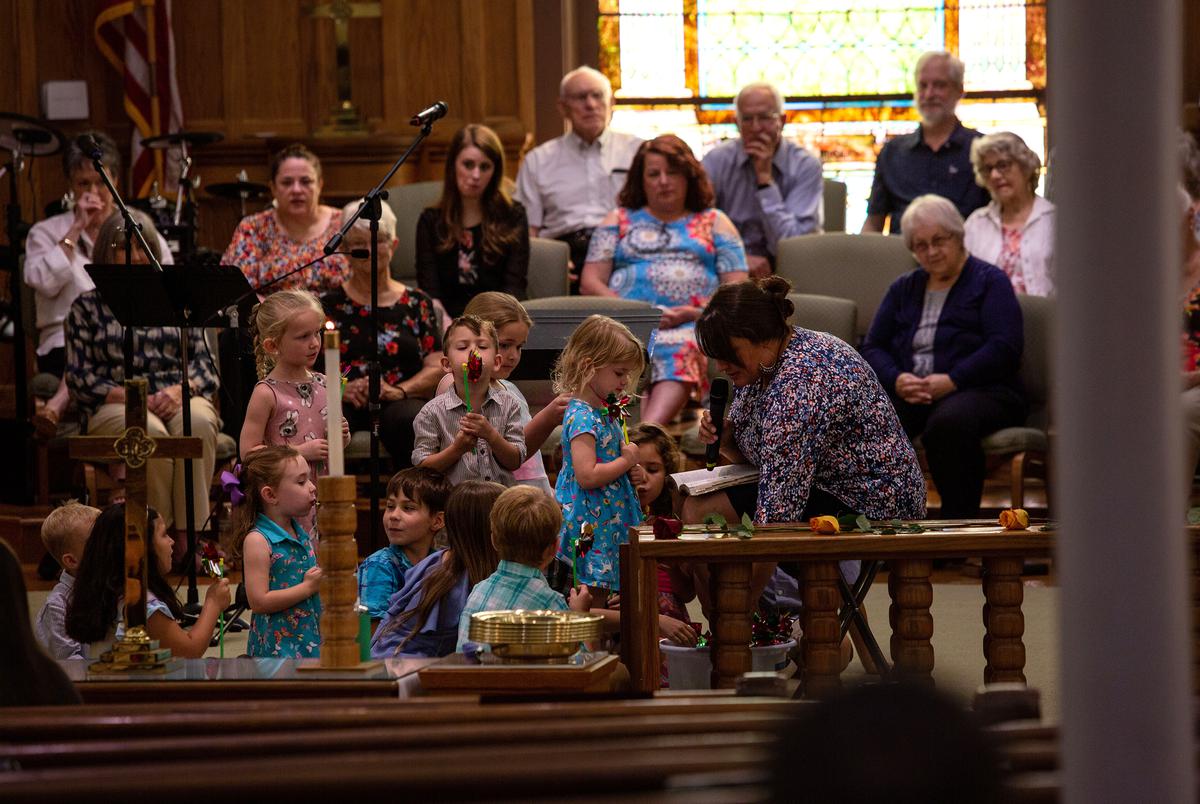 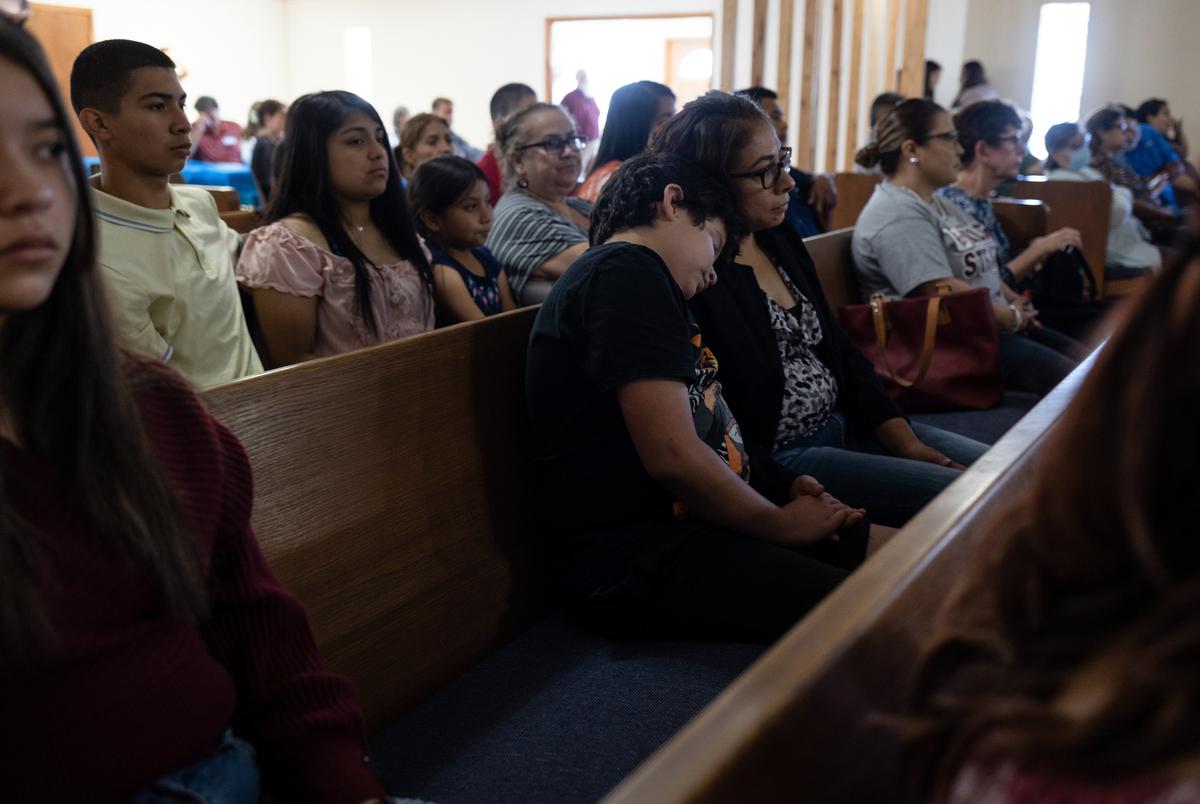 Zeke Rendon rests his head against a family member during mass at Primera Iglesia Bautista Church in Uvalde on May 29, 2022. Credit: Evan L'Roy for The Texas Tribune

First: People attend a mid-morning service at First United Methodist Church on Sunday in Uvalde. Last: Zeke Rendon rests his head against a family member during a service at Primera Iglesia Bautista in Uvalde. Credit: Kaylee C. Greenlee Beal and Evan L'Roy for The Texas Tribune

Just a few blocks away, people gathered at Primera Iglesia Bautista, a Baptist congregation that resembles a ranch style home, for an 11 a.m. service.

Elias Barboza, a longtime member of the church, said he feels angry. He’s only human, after all, he said. That’s why he came to church.

“Maybe some people don’t understand, but God gives us peace,” Barboza said in Spanish. “[That] peace is not like anything this world can offer.”

Barboza pleaded with God to bring grace and healing to the victims' families. He also expressed gratitude: His grandson was at Robb Elementary when the shooter opened fire but survived.

Barboza’s nephew, Gama Barboza, 47, an associate pastor, was busy running logistics in the church that Sunday. He made sure there was enough food for everyone. He set up equipment for the music. He’s worked with the church for a combined 25 years, he said.

“The healing process starts when we seek God and his word,” Barboza said, adding that God “offers a peace we are able to rely on.”

In the soft and dim light that morning, the congregants sang in unison, stretching their voices above. They prayed individually and then, after the service ended, embraced each other loudly.

“We will be reunited with them one day,” Gama Barboza said.

Well before Sunday, the city’s religious communities had opened their doors to people reeling from shock and grief. Late Tuesday night, Joe Perez, 66, who leads Spanish services at Getty Street Church of Christ, sat in a large empty room and logged in to Zoom with his phone with other church leaders to discuss what their church could do. For several hours prior, he’d been counseling distraught church members.

“That’s what we’re trying to do,” Perez went on. “We’re trying to help each other out, hold their hands. Whatever we need to do to ease their pain.”

In the town square that week, 21 crosses stood where community members, loved ones and families could mourn, laying flowers, notes and stuffed animals. On an ichthys symbol fixed to each of the short white crosses, a Bible verse was written. Xavier Lopez’s cross had Matthew 5:4.

Next to dozens of notes of grieving family members, it read, in cursive, “Blessed are those who mourn, for they shall be comforted.”