Each day, Ashley Beattie and her fiancé spend hours driving around Bell County looking for baby formula to feed her eight-month-old son. First H-E-B, then Walmart, then Target. She searches until she can find something.

On Tuesday, a friend alerted her that there were eight cans of Enfamil Gentlease at a nearby Sam’s Club. The brand meant Beattie, one of nearly 200,000 Texas moms whose lower income qualifies her to have her formula purchases paid for through the Texas Women, Infant and Children, or WIC, program, had to quickly calculate how much that would put her budget behind yet again.

“I feel stressed,” Beattie said. “It's hard, it's a lot of money being taken out of pocket.”

Since February, parents across the country have been dealing with scarce supplies of baby formula after Abbott Nutrition, one of the four major manufacturers of U.S. baby formula, issued a February recall due to bacterial contamination resulting in a shutdown of its plant in Sturgis, Michigan. The shutdown and recall has hit retailers’ formula inventories hard. Many families have taken to their social media feeds to help locate stores with formula.

Texas is being hit particularly hard with 52% of baby formula out of stock as of May 1 — the third worst in the nation according to the retail software company Datasembly. Both Houston and San Antonio are among the U.S. metro areas hit hardest by the shortage, with Houston the second worst in the U.S. at a 52.5% out of stock rate, the data firm said. 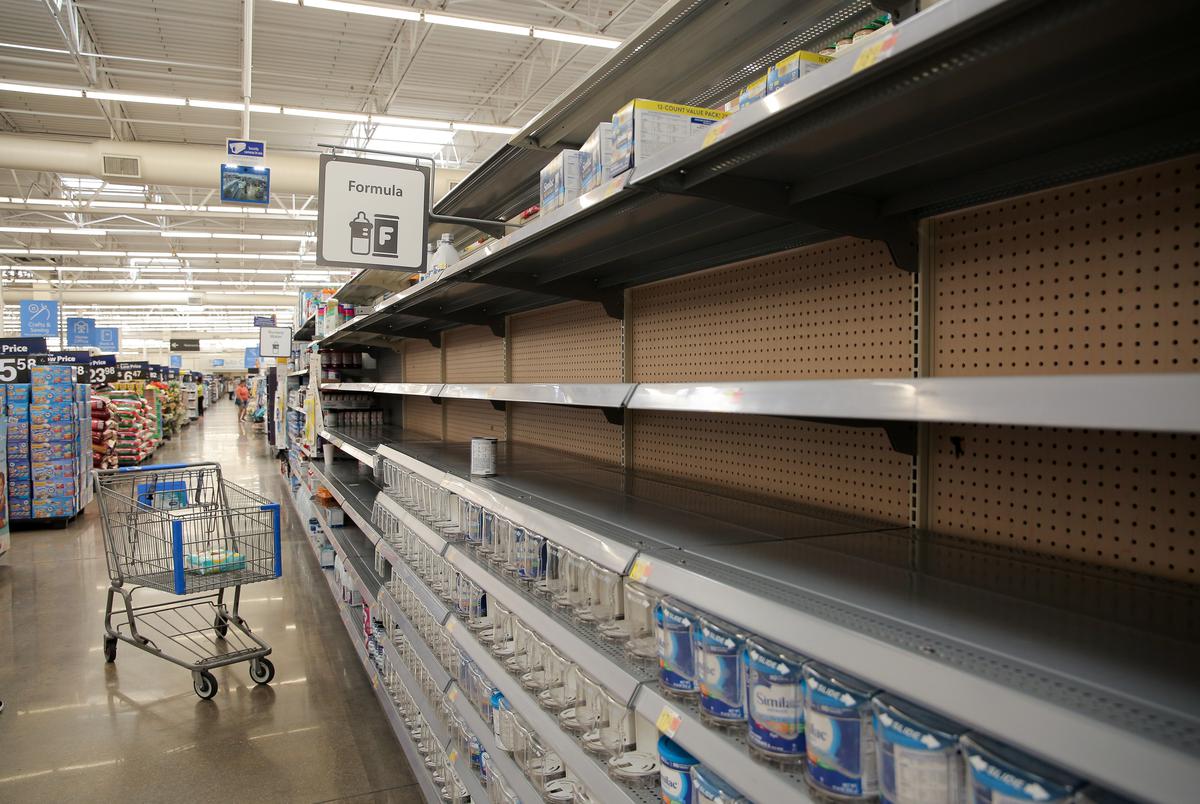 The Walmart Supercenter baby formula aisle in Baytown on May 12, 2022. Credit: Briana Vargas for The Texas Tribune 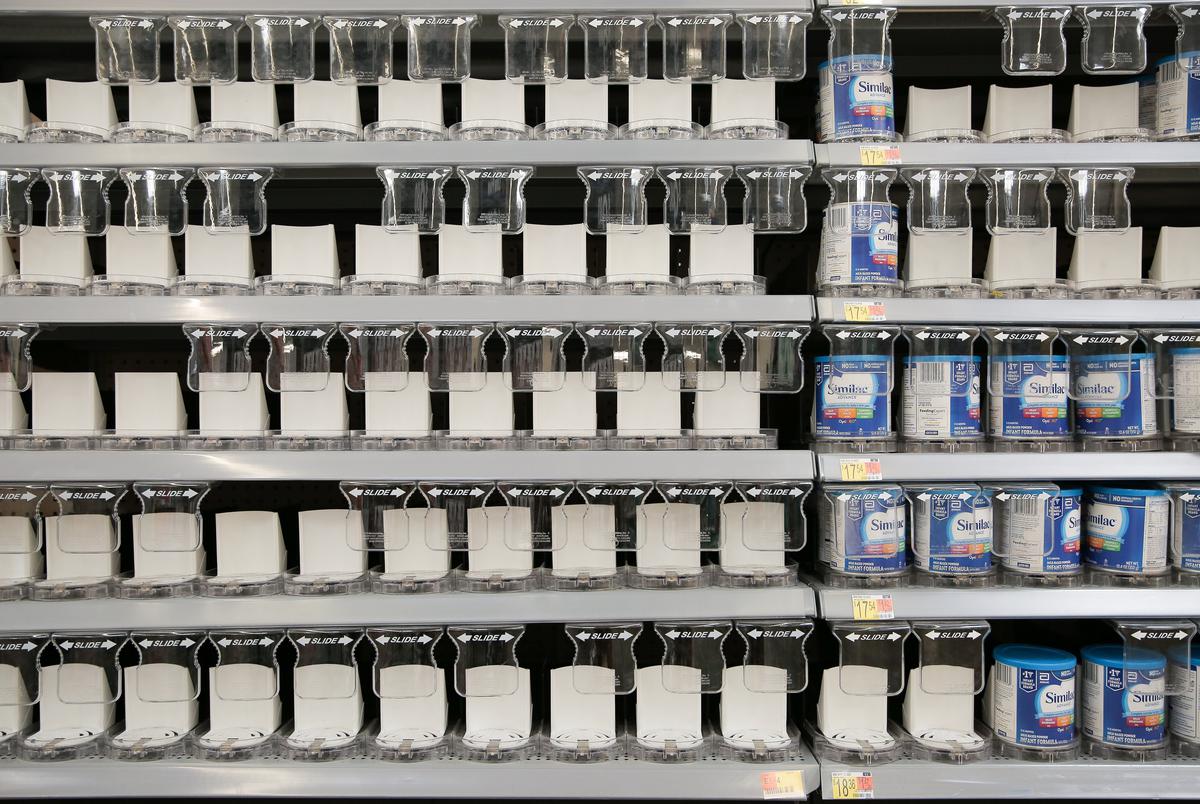 The Walmart Supercenter baby formula aisle in Baytown, Texas on May 12, 2022. Credit: Briana Vargas for The Texas Tribune

But for WIC moms like Beattie, the problem is even worse. Similac, made by Abbott, was the brand she was initially told to buy with her Texas WIC card. Although Texas Health and Human Services added 75 alternative standard formula options within the first week after the Abbott recall announcement in February, word has not trickled down to WIC users contacted by The Texas Tribune.

Adding to the confusion is the fact that moms in different counties are being offered different guidance on what they can purchase with their state-issued WIC cards. That’s because, according to HHSC, local WIC offices are telling their clients what to buy based on local supply levels.

And even though the state has relaxed what WIC moms can buy through the program, expanding the formula list to 90 brands, that’s not the message some moms are getting from their local offices. So they’re taking what they can find and paying for it themselves.

For Beattie, that meant that on Tuesday, she grabbed the available cans of Enfamil Gentlease she found at Sam’s Club. She calculates that she has been spending almost $500 a month for formula and has had to cut back on her family’s other groceries. Sometimes, she says she finds one of the brands covered by WIC, but it’s always in a size larger than the 20 ounce she has been told by the state to buy.

“I wish there was any cheaper way for this, but there’s not,” Beattie said.

For low-income mothers across Texas, the new expense is coming at a time of surging inflation, when family budgets are already strained by rising food costs and soaring gas prices.

“This is the worst timing for this situation,” said Rachel Cooper, a senior policy analyst at Every Texan, the left-leaning policy group. “This would be complicated and confusing no matter what, but when food prices in general are through the roof, WIC’s ability to cover formula becomes even more important.”

Started as a pilot in 1972 and made permanent two years later, the Special Supplemental Nutrition Program for Women, Infants, and Children was designed to offer nutrition assistance to moms with children under the age of five. Today, WIC, funded by the U.S. Department of Agriculture, serves about half of all infants born in the United States, according to a 2018 report. Nationwide, about half of all infant formula is purchased by WIC participants, the Biden administration said on Thursday.

Households must meet certain salary thresholds to qualify for Texas WIC. For example, a Texas household of three with a gross annual income of $40,626 qualifies for the program.

Texas Health and Human Services Commission spokesperson Tiffany Young told the Tribune that Texas WIC employees have been in constant communication with both the families they serve and local WIC clinics about the changing formula purchase rules. The agency relies on a text-messaging system to push out the latest information to their clients.

“At this time, the Texas WIC program and the contract formula company is covering the cost of almost any brand or size of standard milk or soy based infant formula that families can find,” Young told the Tribune in an email.

She said that if WIC clients had any questions about whether formula purchases they should go to the Texas WIC website or check with the local clinics in their area. Texans can use this link to check if their baby formula was included in the recall.

Young also said the agency has encouraged grocers to “use maximum flexibility possible to ensure WIC participants received safe formula,” including allowing redemption of one of the 90 additional formulas. H-E-B confirmed to the Tribune the state had informed them they could relax restrictions.

“We have been actively coordinating with grocers in response to any reports from WIC families who are having difficulty redeeming newly authorized products,” Young said.

Nataly Romero, 20, is a new mother of a 1-year-old boy who lives in Baytown and they’re both enrolled in the Texas WIC program. At her doctor’s direction, she had recently begun the transition from formula by adding milk to her baby’s diet. She said she spends hours each afternoon after work going from store to store with her husband looking for formula that she still needs to feed him at this time.

“There is a WIC app that tells you your benefits,” explained Romero. “But on the app it did not show that I could expand to the different brands.”

Romero says she now spends $100-$150 each month. Switching formulas is complicated by the fact that her son rejects many of the brands new to him, and has reacted negatively to them.

After she contacted her WIC office by phone, Romero was informed she could use two other brands, she said.

“Due to the shortage, if those two brands weren’t in stock, I would have to buy a different one out of pocket,” she said.

Romero says she heard about the opportunity to switch brands after her friend sent her an article detailing how Texas WIC would now be covering different formulas after the recall. Although Texas HHSC has said the agency has sent texts to WIC mothers about the relaxing of what brands can be purchased, Romero says she never got one.

“They should have been like, ‘Just whatever you find,’” will be covered, Romero said of Texas WIC.

Romero’s aunt, Veronica Valencia of Port Arthur, is also in the Texas WIC program and also struggling to find formula for her 10-month old twin girls. Valencia, 35, has had to pay an extra $200 a month since the shortage started.

She was initially buying Similac through WIC, but after the recall they switched her to Gerber brands size 19 ounces, Valencia said. She could never find the brand and size combination. 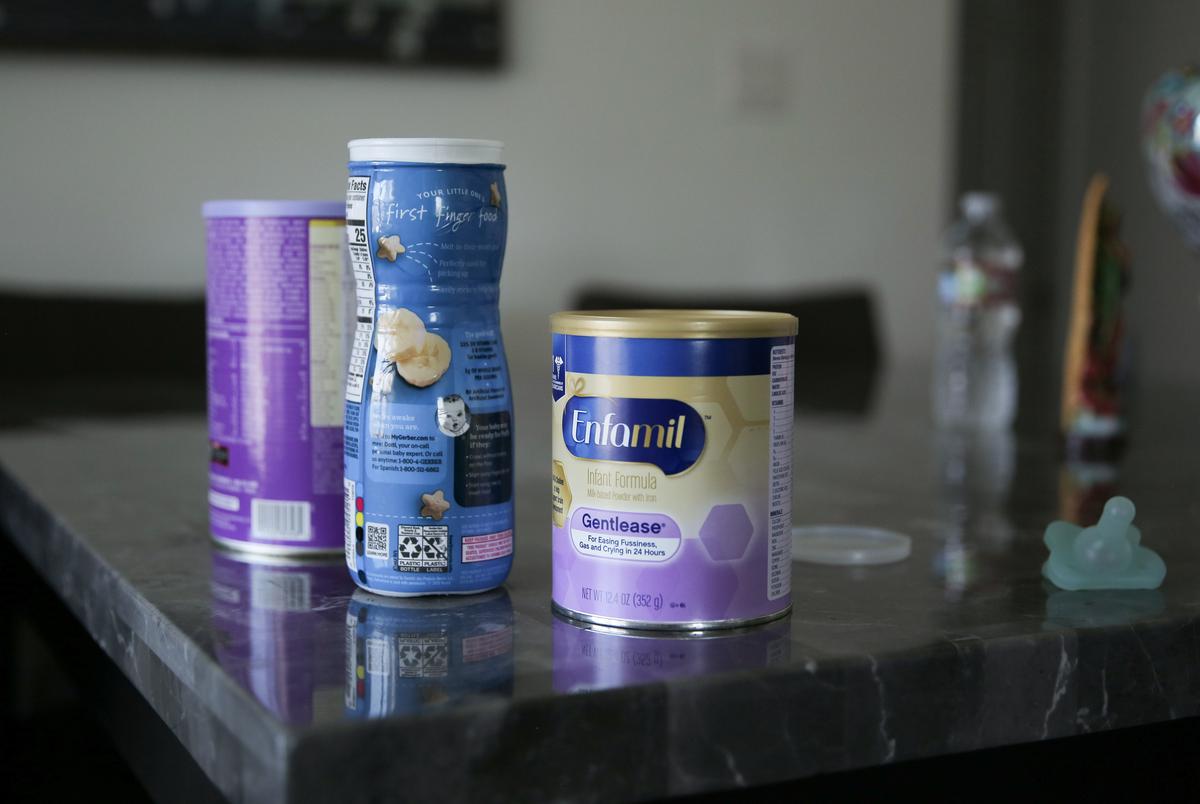 Baby formula on a counter in Nataly Romero's home. Credit: Briana Vargas for The Texas Tribune

“Everything was fine until the news came out that the formula was recalled, and I stopped giving it to them,” Valencia said in Spanish. “I talked to WIC, they changed it for me, but there wasn't any of what they gave me and I went to the stores on my own to look for the formula … And all of the cans that I bought were out of pocket. You had to buy them.”

Before the shortage, Texas WIC normally covered the cost of one specific brand and size can of formula for mothers unless parents can provide a reason, like an allergy, why their child cannot use the state-assigned brand.

Most infants rely at least partially on formula. About one in five breastfed infants in Texas received formula in their first two days of life.

Baby formula is critical to the neurological and nutritional development of children, and is often the only option mothers have when lactating isn’t possible for them. Also, babies often grow dependent on one type of formula, and switching formulas abruptly can cause the baby to throw it up or suffer a severe stomach ache.

“Infants have sensitivity to different foods, and if they're introduced to something new at a young age, then they're hypersensitive to it,” said Rola El-Serag, director of the Baker Institute's Center for Health and Biosciences at Rice University.

Although Texas mothers have been dealing with the formula shortages since February, it was not until this week that Gov. Greg Abbott made his first public statement about it, and only to condemn the Biden administration for allowing the babies of undocumented families held in detention centers to receive formula.

“President Biden has turned a blind eye to parents across America who are facing the nightmare of a nationwide baby formula shortage,” the joint statement read. “While mothers and fathers stare at empty grocery store shelves in a panic, the Biden Administration is happy to provide baby formula to illegal immigrants coming across our southern border."

In a statement to the Tribune, the USDA acknowledged the ongoing shortages and said the agency “takes seriously its role in safeguarding the health of families served by our WIC Program.”

“We know that this situation is causing stress and anxiety for many families,” the statement read. “USDA is committed to providing technical assistance and maximum flexibility, including regulatory waivers, for State [WIC] agencies as they work with their infant formula rebate contractors and other stakeholders to respond to the recent recall.”

Beattie, Romero and Valencia all said beyond being costly, the shortage — and the relentless search for formula — has caused them so much stress.

“Moms panic,” Romero said. “You want to have food for your baby.”

Alexa Ura contributed to this report.

Disclosure: Every Texan, H-E-B and Rice University have been financial supporters of The Texas Tribune, a nonprofit, nonpartisan news organization that is funded in part by donations from members, foundations and corporate sponsors. Financial supporters play no role in the Tribune's journalism. Find a complete list of them here.

Tickets are on sale now for the 2022 Texas Tribune Festival, happening in downtown Austin on Sept. 22-24. Get your TribFest tickets by May 31 and save big!