Meet the Texas teens taking on the state’s ‘tampon tax’

On a Friday afternoon last March, Sahar Punjwani ran a familiar errand — buying tampons, pads and panty liners. But this time, she was joined by lawyers from a prestigious Houston law firm.

“It was weird because we were all crowded into the aisle together, and they were just watching me, waiting for me to hand them my receipt,” Punjwani recalls.

That receipt showed that Punjwani had spent $21.56 on menstrual products — and $1.78 on sales tax.

Texas is one of 26 states that charges sales tax on menstrual products, something Punjwani and her organization, the Texas Menstrual Equity Coalition, have been fighting for years to change. That visit to the pharmacy, and the $1.78 in sales tax it generated, was the first step in a new challenge that the group says they’re prepared to take all the way to the state Supreme Court.

Though the whole group is behind this new effort, it was Punjwani’s receipt that had to be submitted as evidence, and her name that had to lead the legal filings, because she was the only member of the group’s leadership that was legally an adult at the time.

Punjwani, now 20, said it’s not surprising to her that this effort to repeal the sales tax for menstrual products is being led by a group of teenagers. In her experience, there’s still a lot of stigma around discussing periods among older generations.

“I think that’s translated into a lot of frustration with my peers over not being able to talk about something that is so natural,” she said. “We’ve learned, from social media and other things, to translate that frustration into activism and actual results.”

Punjwani grew up in Houston in an immigrant family in which menstruation and periods were seen as a taboo subject. When she was a junior in high school, she saw an Instagram post from a national period equity advocacy organization advertising a policy boot camp for young people.

During the training, she learned about how sales tax contributes to “period poverty,” a lack of affordable, accessible menstrual products for low-income people. Period poverty is widespread in the United States: 1 in 5 teens cannot afford menstrual products, according to a study from the national advocacy group Period, and 84% have either missed class or know someone who has missed class due to insufficient menstrual supplies.

People who use alternative menstrual supplies, like rags and paper towels, are at heightened risk for infection, and there are negative mental health impacts of not being able to afford proper sanitary supplies.

Several states have repealed their sales tax on menstrual products in recent years, but as Punjwani learned in the training, Texas has not. In this training, Punjwani met other Texas teens who were as outraged by this as she was — like Zoe Kass. 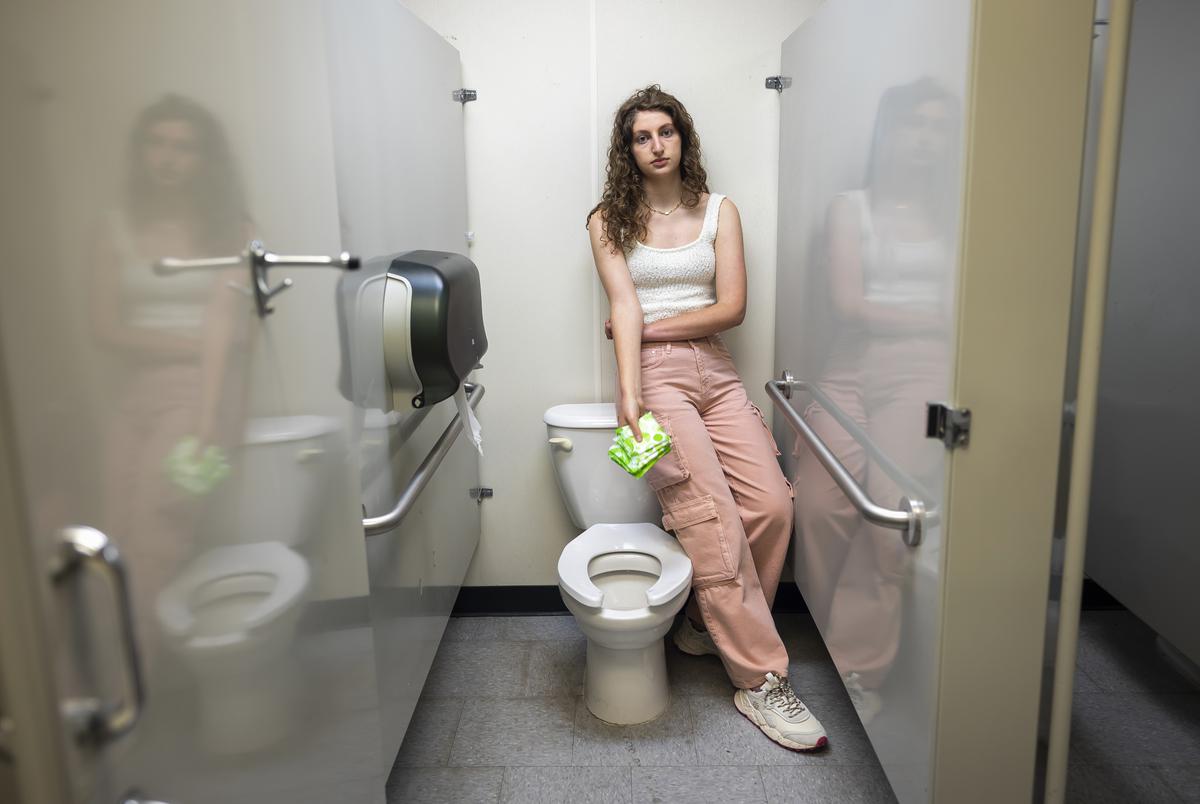 Eighteen-year-old Zoe Kass holds a handful of pads in her high school bathroom in Houston on Thursday. Kass is a menstrual equity advocate and has raised hundreds of dollars to purchase menstrual products for students at her school. Credit: Annie Mulligan for The Texas Tribune

Kass, now 18, first got involved with this issue while volunteering in the obstetrics clinic at Ben Taub Hospital in Houston. Some of the patients she interacted with couldn’t afford menstrual products or were forced to sacrifice other necessities to pay for pads and tampons.

Kass co-founded The Period Pact Houston, which raises money to donate menstrual supplies to school nurses in the Houston area. She’s also known for filling the women’s restroom at her school with pads and tampons, earning her the nickname “the period girl.”

“There was one day that I dropped a box of tampons down the stairs and this boy caught them and his eyes went really wide,” she said. “I was like, well, we’re fighting stigma one scared teenage boy at a time.”

Many of the young Texans who met during the policy boot camp were already doing these donation drives and fundraisers in their own communities. But they wanted to think bigger. They started meeting regularly in summer 2020, eventually titling their group the Texas Menstrual Equity Coalition.

And their first target? The sales tax on menstrual products.

“A lot of people go their whole lives buying menstrual products and never realize they’re paying taxes,” said Punjwani. “And then there are people who are very conscious of that, and that’s who is going to benefit the most from this.”

The coalition started working with state legislators, including Rep. Donna Howard, D-Austin, who has filed a bill to make menstrual supplies tax-exempt every session since 2017.

None of those bills ever made it out of committee. But in early 2021, Kass got the call: Howard’s bill was going before the state House Ways and Means Committee, and she was being asked to testify.

Kass and another member of the coalition skipped virtual school for the day, drove to Austin, sat in front of a panel of state legislators and talked about their periods. She said it was empowering to get a chance to speak to elected officials, “especially because I can’t even vote for them yet.”

But she also knew there was very little chance the bill would pass, a sentiment she said some of the legislators conveyed very clearly.

“Not all of them, but some of them definitely saw us and treated us as little girls,” she said. “We’re basically their kids’ ages in a lot of cases, and what right do we have to tell them how it is?”

She said she left the hearing “proud but annoyed.”

The Legislative Budget Board estimated the sales tax reduction would cost Texas roughly $42 million over the two-year budget cycle. The bill didn’t advance to the House floor.

But the coalition was already working on another angle to repeal the tax, starting with Punjwani’s receipt for $1.78.

As part of their legislative advocacy work, the coalition met with the Women’s Health Caucus, where they first discussed the idea of bringing a legal challenge to the tax on menstrual supplies. Kass asked her dad if he knew any lawyers who could help them explore this avenue, and he connected them with prestigious Houston law firm Baker Botts.

“When we started digging into sales tax … regulations promulgated by the comptroller, we saw that there was really this inequity going on in the tax treatment of menstrual products,” said Baker Botts associate Laura Shoemaker McGonagill.

Baker Botts agreed to take the case pro bono, which is how they all ended up in the tampon aisle at a store in Houston, watching Punjwani buy menstrual products. They then submitted that receipt to the Texas comptroller’s office, requesting a refund on the sales tax she’d paid — and a determination that all menstrual products should be similarly tax-exempt.

Their argument is that menstrual products qualify as “wound care dressings,” which the tax exemption regulation defines as a product that “absorbs wound drainage, protects healing tissue, maintains a moist or dry wound environment (as appropriate), or prevents bacterial contamination.”

“We view this inequitable application of wound care dressings as discrimination on the basis of sex,” said Shoemaker McGonagill. “For example, gender-neutral products, like Band-Aids, are tax-exempt and feminine hygiene products are not.”

She also pointed out that over-the-counter male libido enhancers are tax-exempt under a separate regulation.

“Just as a basic layperson looking at this, I think most people would say managing a monthly menstrual flow is much more important and medically necessary to yourself and to others, compared to libido enhancers,” Shoemaker McGonagill said.

In February, the comptroller’s office rejected Punjwani’s request for a refund; she filed an appeal and requested a hearing. If that appeal is denied, they plan to take the case to the courts.

Shoemaker McGonagill said working with the young women behind this movement has been one of the more inspiring experiences of her career.

“When I think back to what I was doing when I was 17 or 18, I was not advocating for change at a legislative level,” she said. “We’ve just been blown away by them from the very beginning. They’re very thoughtful. They have good insight. And I think they’re working really hard to remedy the situation through every avenue available to them.” 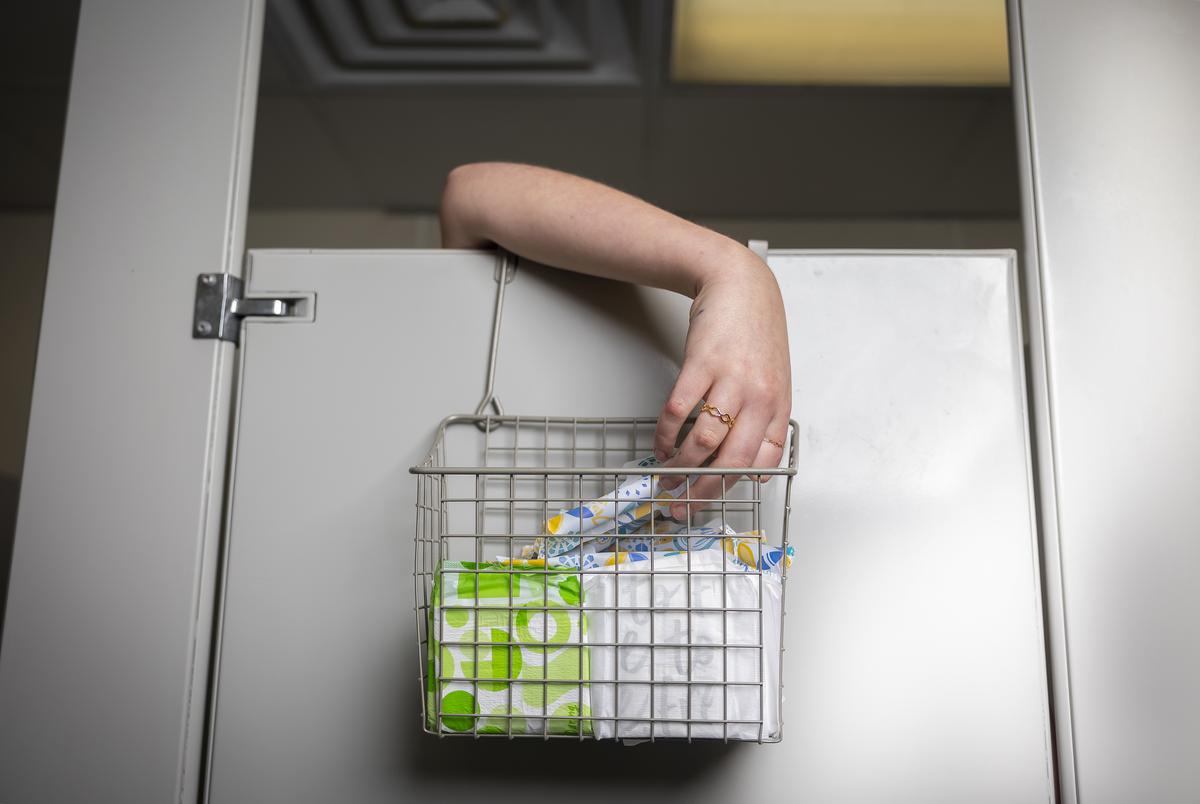 The fight goes on

While this case wends its way through the administrative system, Kass, Punjwani and their peers are still working to advance understanding about period inequities in their community.

Punjwani is now a sophomore at the University of Chicago, where she has run menstrual supply donation drives alongside other advocacy work. In her own family, she has seen firsthand the power of talking openly about these issues.

“I have two younger sisters and they know now that this isn’t something you have to be quiet about or use code words for,” she said. Her sister has started running similar donation drives at her high school, too.

Kass is finishing up her senior year of high school, still stocking the bathrooms and, through her AP government class, learning a lot more about the process she has been participating in.

“It’s just been funny, we’ve been talking about lobbyists and Supreme Court cases and the Ways and Means Committee, and it’s like, oh, I testified to them,” she said. “And now working with the lawyers to try to understand the tax code and all that.”

When she joined that policy training a few years ago, she said she never would have imagined she’d be taking on the state’s tax code on behalf of all menstruating people.

“This is the result of a lot of people trusting us and having confidence in us and taking us seriously,” she said. “And if we’re successful, I think it really sets a precedent for other states. Because if Texas can do it, so can everywhere else.”

Disclosure: The Texas Comptroller of Public Accounts has been a financial supporter of The Texas Tribune, a nonprofit, nonpartisan news organization that is funded in part by donations from members, foundations and corporate sponsors. Financial supporters play no role in the Tribune's journalism. Find a complete list of them here.