MCALLEN — Eladio Cordero, a produce worker at Trinidad Fresh Produce in the McAllen Produce Terminal Market, sorted through jalapeños Thursday — about one in three had orange spots. A few feet away from him, dozens of flies buzzed around a pile of browning onions.

Every day at the terminal, where hundreds of trucks pass through to drop off tons of Mexican-grown goods, the fruits and vegetables that have gone bad are picked out and thrown away.

“The merchandise comes from Mexico and by the time it crosses it can go bad, and those are losses,” said Gustavo Garcia, a floor manager for Trinidad Fresh Produce, a distributor at the terminal.

After Gov. Greg Abbott ordered state inspections on commercial vehicles entering from Mexico last week, the stack of garbage-bound onions grew taller. The jalapeños that didn’t survive the long journey into the U.S. were discarded. Garcia said he doesn’t know if retailers will still want to buy the aging produce he keeps, but if they do, the price will be marked down at least 30%.

The state’s inspections, which were conducted on every northbound commercial vehicle entering through Texas’ biggest ports of entry, were in addition to those already performed by federal customs authorities. The governor effectively ended the policy Friday after reaching deals with his counterparts in the four Mexican states that share a border with Texas, but the disruption caused by the inspections will likely have lingering impacts.

In McAllen, one of the Rio Grande Valley’s busiest trade posts with Mexico, Abbott’s directive caused ripples across the supply chain. Long lines at the Pharr-Reynosa International Bridge left truckers waiting to cross for days, big-name grocers shifted their import routes to other ports of entry outside Texas, produce spoiled en route and warehouses sat empty. All the while, workers who depend on the commerce between the two countries lost hours and pay — and consumers will likely pay a price, too. 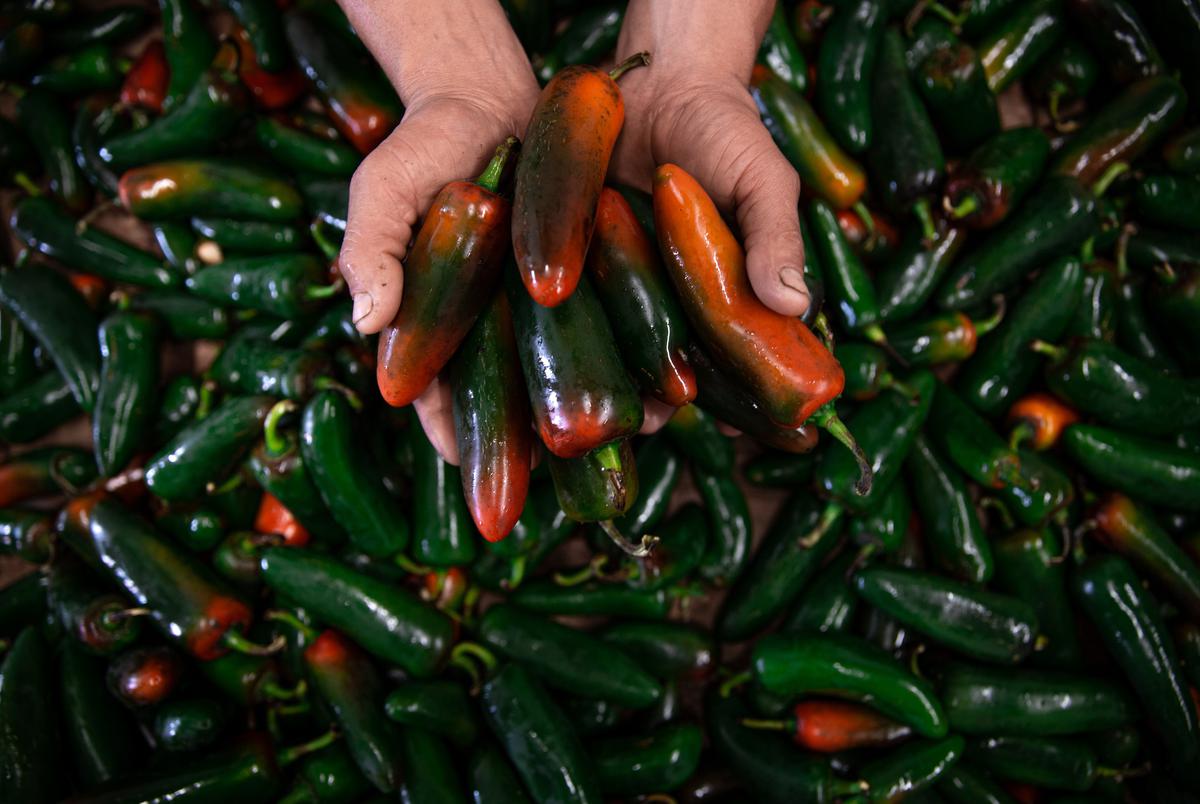 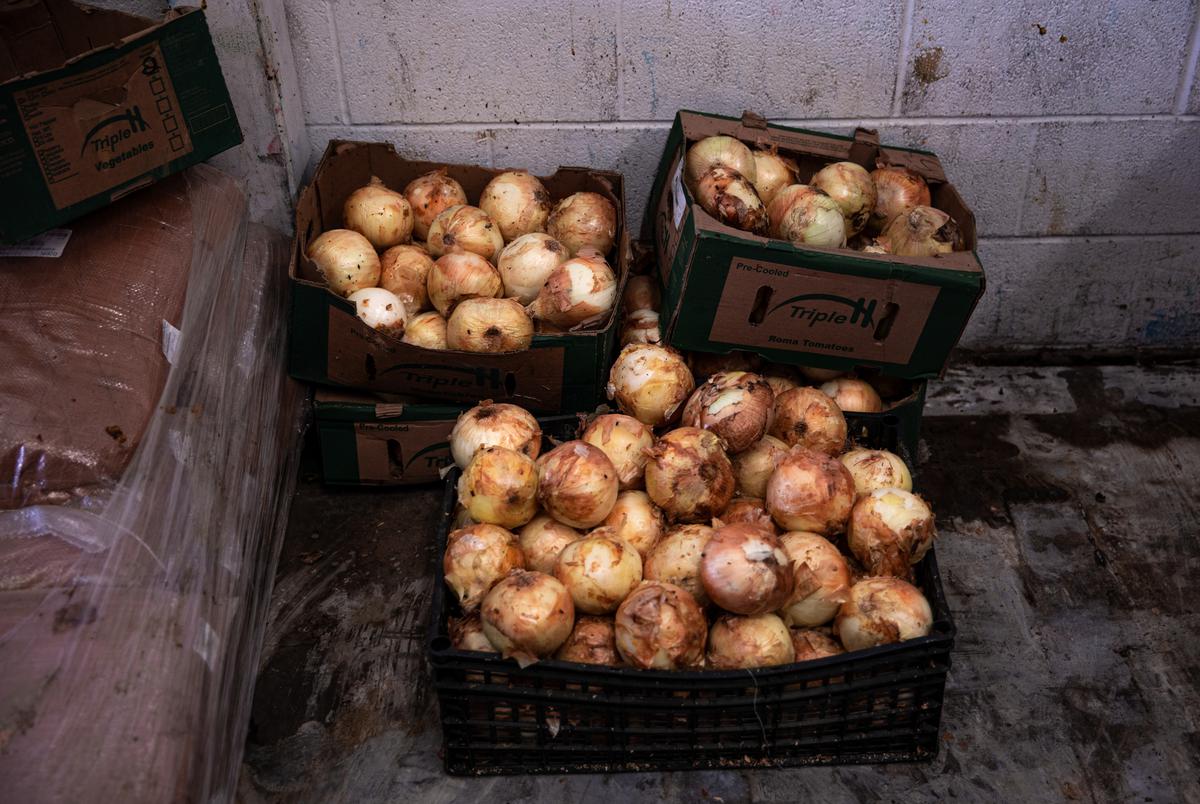 First: About one in three jalapeños had orange spots at Trinidad Fresh Produce at the McAllen Produce Terminal Market. Last: Onions were spoiling after commercial delivery trucks were delayed by the additional inspections that Gov. Greg Abbott ordered last week. Credit: Jason Garza for The Texas Tribune

On Friday, Abbott said he recognized that the increased inspections caused economic hardship on both sides of the border, but that securing the border is more important.

“There is the expectation that the Mexican states that I've negotiated deals with will do what is necessary to reduce illegal immigration, and there's the consequence that if not, the 100% inspections will be reinstated and they may have knock-on economic effects,” Abbott said. “We are going to do what is necessary to make sure that we have safe and secure borders.”

Long waits at the bridge

Trucks entering Texas already were subject to multiple inspections prior to Abbott's move last week. At federally controlled ports of entry, U.S. Customs and Border Protection agents use equipment such as portable X-ray machines to look for drugs and smuggled migrants. At larger commercial ports, federal agencies like the U.S. Department of Transportation and the U.S. Food and Drug Administration also conduct specialized inspections to ensure vehicles and products alike meet federal standards.

The measure was part of Abbott’s response to the Biden administration’s decision to end Title 42, an emergency health order meant to halt the spread of the coronavirus that allowed immigration authorities to turn away migrants at the border, even those seeking asylum. Abbott has made border security his top priority issue as he seeks reelection in November. 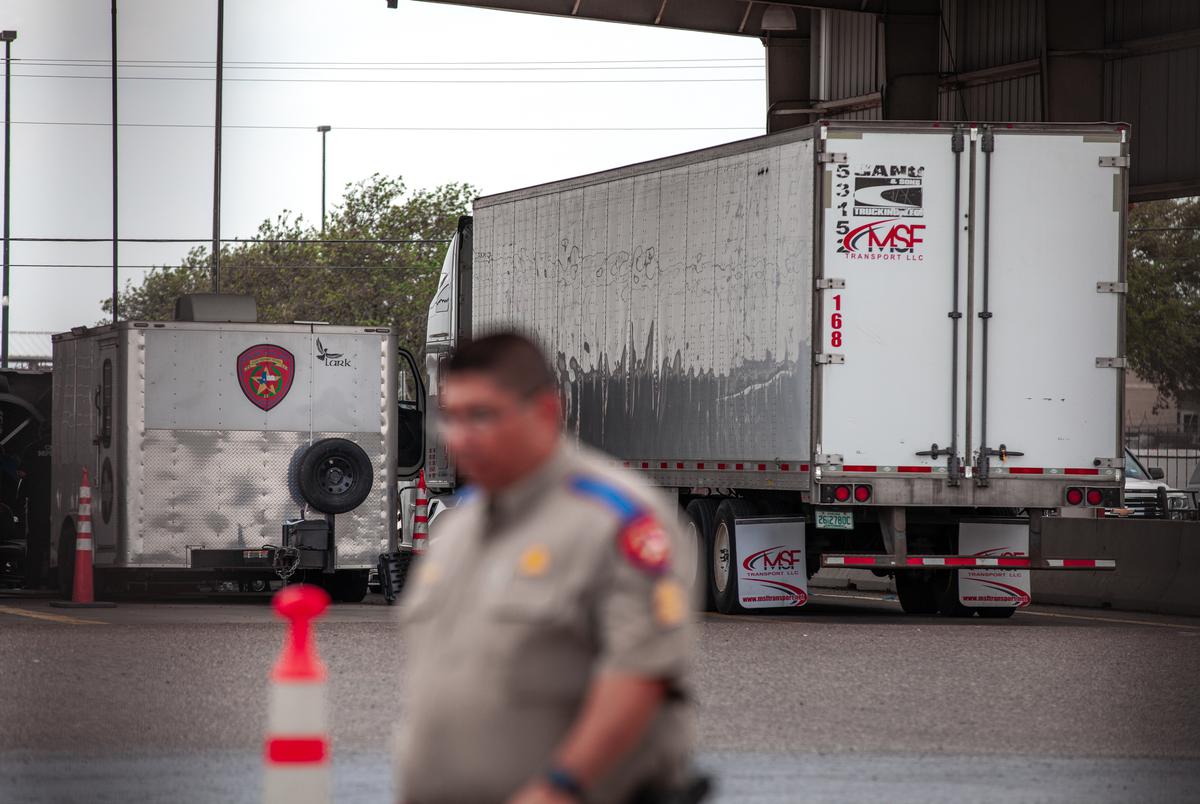 DPS troopers inspect trucks in front of the Pharr-Reynosa International Bridge in Pharr on Thursday. Credit: Jason Garza for The Texas Tribune
Ad

Normally, about 3,000 commercial trucks cross the Pharr bridge each day, bringing about $60 million to $70 million worth of goods into the U.S. from Mexico. But Abbott’s policy slowed transit to a crawl this week, turning a journey that typically takes a couple of hours into days for some. Mexican truckers protested the measure with a blockade, shuttering all commercial traffic for three days.

The blockade ended Wednesday, but on Thursday, hundreds of trucks were still stuck at the bridge.

Felix, a 60-year-old Mexican trucker who was transporting tomatoes, onions and avocados, waited about 13 hours in line at the bridge. He asked to be identified only by his first name for fear of retribution and targeted inspections from CBP officials.

Hearing of the delays at the border, he packed water and food for a few days. But other truckers didn’t come as prepared and were sitting in standstill traffic without anything to eat or drink. Felix said he was told by a CBP official that the agency would put portable bathrooms along the bridge for the gridlocked truckers, but he never saw them.

Once Felix made it to the state troopers’ inspection point around 9 p.m., he said they didn’t even peer into his truck, which had been sealed since Mexican authorities inspected it about 600 miles away in the state of Sinaloa.

“There’s no possibility of bringing illegal immigrants in the merchandise or in the cabin,” he said, referencing one of Abbott’s explanations for the inspections. “I can’t bring an illegal immigrant here for money because I know [inspectors] are going to discover them. It’s not a thing here. I don’t know what the politicians’ ideas are. I don’t know what they’re talking about.” 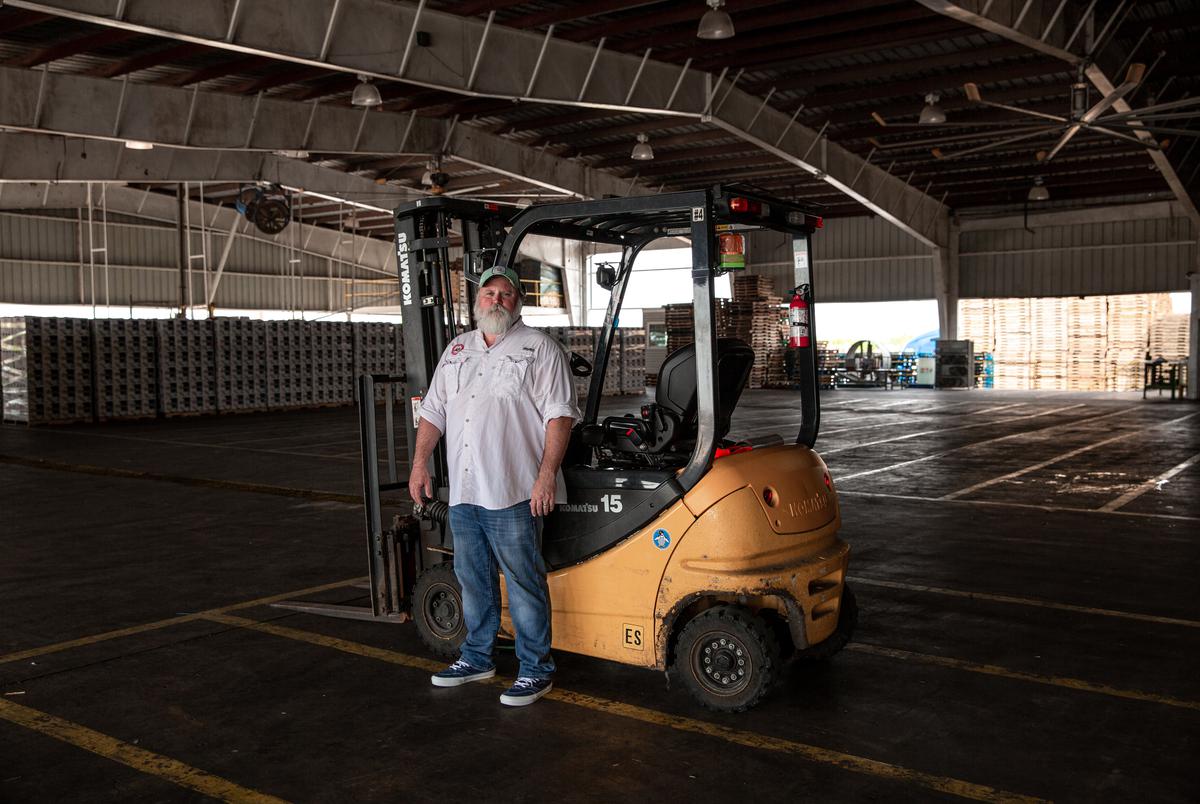 Bret Erickson, vice president of business affairs at Little Bear Produce in Edinburg, stands Thursday in front of an unusually empty warehouse floor where large shipments of watermelon typically would be. Credit: Jason Garza for The Texas Tribune

Another blow to the local economy

The delays caused by the state’s inspections are the latest blow to farmers and produce businesses in the Rio Grande Valley since 2020. Last year's winter freeze damaged millions of pounds of product. The pandemic forced companies to size down their workforce and implement virus mitigation strategies. And inflation is sending costs for business needs like fertilizer, diesel and packaging materials soaring.

But Bret Erickson, former president and CEO of the Texas International Produce Association and a current executive with Little Bear Produce, a Texas produce grower and distributor, said this latest setback is different.

“There's nothing you can do about Mother Nature; that's just part of the farming business,” Erickson said. “But when you've got a politician go out and make a decision like Gov. Abbott did, it's like a slap in the face.”

“Anytime that we are losing a day of business, there's always a lasting impact,” he added. “Every day that goes by that we haven't been able to receive these loads, those are sales dollars that we will not get back. Those are dollars that are not going to be returned to our employees' paychecks, because they didn't work.”

Most of the produce that crosses into the U.S. from Mexico comes through the Pharr-Reynosa International Bridge. It’s also where many car parts, electronics, types of medical equipment and other goods make their way across the border.

In this video, see the impact of Abbott’s increased border inspections on produce importers, fruit stand vendors and truck drivers.

Little Bear Produce usually receives about a dozen truckloads of produce a day. In the week that followed Abbott’s announcement, they received four in total. Erickson said the company has lost hundreds of thousands of dollars since last week, and workers who make their living packaging and sorting the products have seen their hours cut amid a lack of goods.

Restaurants, truck stops and bodegas that cater to truckers who move goods over the border have also been affected by the delays. 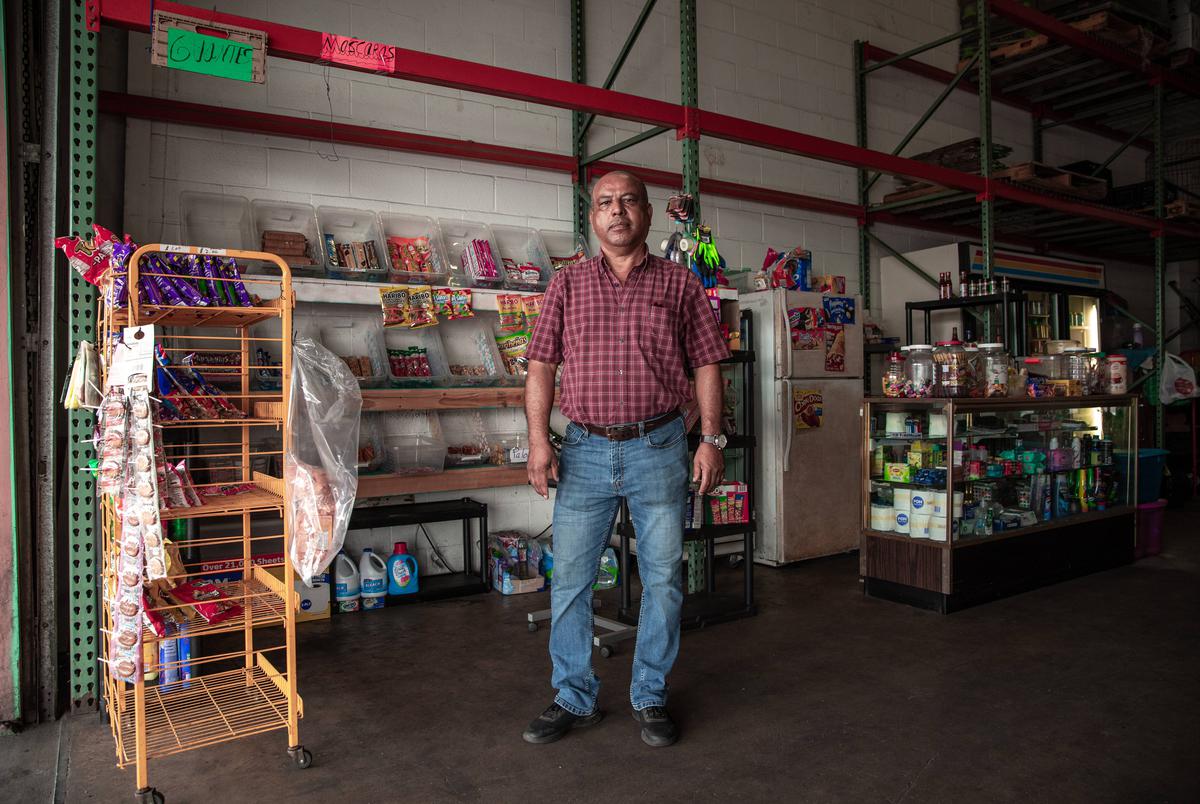 Lucio Mouret stands in front of his bodega at the McAllen Produce Terminal Market in McAllen on Thursday. He said fewer truckers able to cross the border this week has meant a drop in business for him. Credit: Jason Garza for The Texas Tribune
Ad

On Thursday, McAllen’s usually bustling produce terminal was quiet with fewer trucks arriving. Lucio Mouret, 63, makes his living operating a bodega at the terminal, selling sodas, pastries and chips. But the drop in truckers has meant a drop in business.

“It affects us because we struggle to pay rent,” said Mouret, who pays $1,800 a month for the bodega at the terminal. His sales are down about 30% this week, he said, and it’s now going to be more difficult to afford car payments, personal rent and insurance.

Campos Bros Produce, another tenant at the terminal, was waiting on two truckloads of key limes that had been stuck at the international bridge for two days. Workers who sort the fruit have had their hours slashed because of the lack of product. The company pays about $50,000 per truckload of limes, and workers said they hoped the fragile produce arrives in good condition.

In the meantime, they relied on Mexican truckers like Felix to check the temperatures of their refrigerated cargo and continuously replenish diesel in standstill traffic.

Campos Bros will have to pay thousands of dollars in fees to supermarkets if they don’t make their delivery deadline.

Erickson said Little Bear’s business partners — grocers like H-E-B, Walmart and Kroger — are either facing delays or redirecting their shipments through other ports of entry outside of Texas, like Nogales, Arizona, to fill shelves.

“The Texas fruit and vegetable industry is struggling to get back, and then a decision like this gets made by a politician who is trying to score political points,” he said. “It's at the expense of businesses like ours and our employees and consumers' pocketbooks.”

The inspections also affected southbound exports. Auguste Browne, a 65-year old Canadian trucker, was transporting a truckload of frozen beef from Calgary to Pharr so he could hand off the goods to a Mexican trucker who would then distribute them to Mexican consumers.

Browne was meant to deliver the meat on Monday, but on Thursday morning, he was still in Pharr waiting for his Mexican partner to arrive. 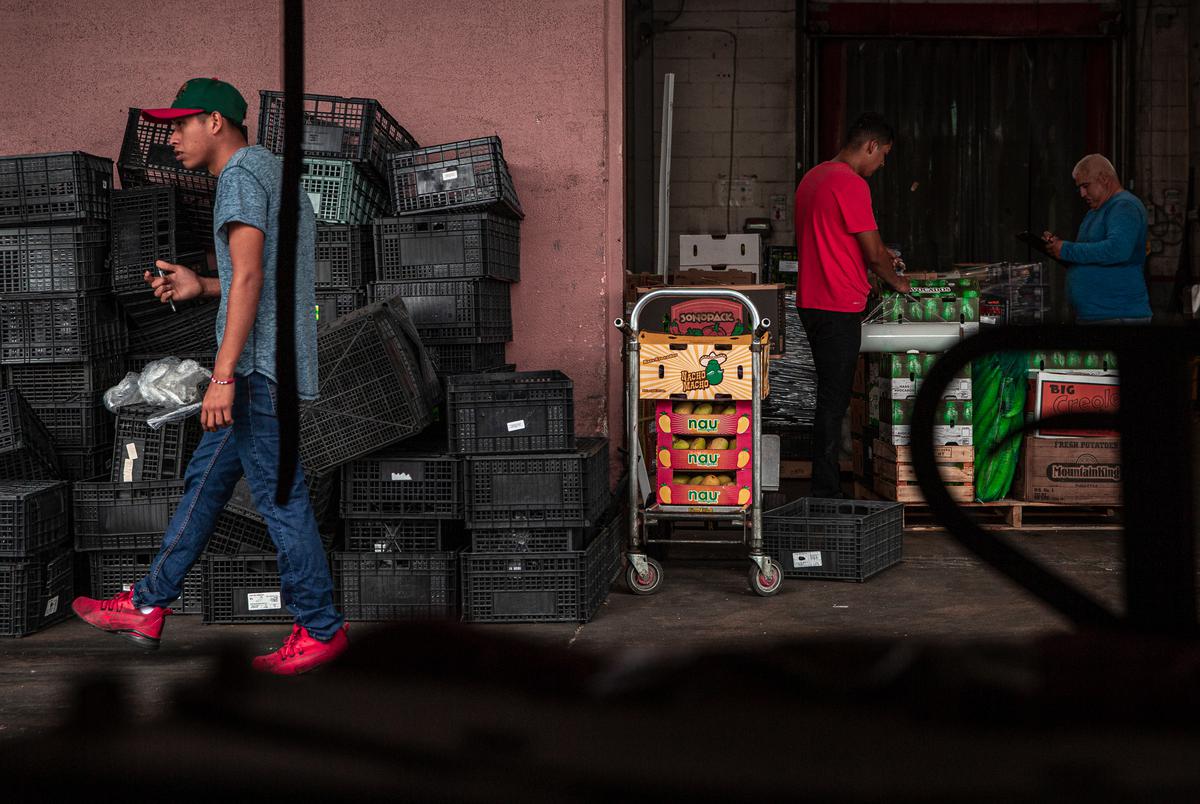 Employees at the McAllen Produce Terminal Market in McAllen on Thursday. Credit: Jason Garza for The Texas Tribune

Posted up at a gas station steps away from the border, Browne said delays and holdups are common in the business, but the cause of this one wasn’t normal.

“As a long-haul trucker, you get used to that sort of thing. But this was unique,” he said. “I've never had this happen before, and it caught us off guard.”

For now, Browne said, his cargo is safe.

“She’s been frozen at minus 10 Fahrenheit this whole time,” he said. “And luckily I had access to a fuel pump, and I've been stranded here, so there’s food. I've actually been one of the fortunate ones.”

Sneha Dey and Verónica G. Cárdenas contributed to this report.

Disclosure: H-E-B has been a financial supporter of The Texas Tribune, a nonprofit, nonpartisan news organization that is funded in part by donations from members, foundations and corporate sponsors. Financial supporters play no role in the Tribune's journalism. Find a complete list of them here.