Celebratory Gunfire: How a neighborhood has been forever changed after Fourth of July tragedy

SAN MARCOS — Ever since Juan Escalante was let go from his job at a distribution center, he and his wife, Emily, have done everything they can think of to provide for their family of five. They cobble together what they can from odd jobs and construction work while she drives for Uber when time allows.

To keep meals on the table, they’ve turned to food stamps and a government assistance program for women, infants and young children. But as inflation continues pushing up the cost of food, they’ve found themselves trying to shore up an ever-growing budgetary gap.

“What would be $100 in groceries is not roughly what was $100 maybe a few months ago,” Juan Escalante said.

To round out what’s in the pantry, the Escalantes also rely on their local food bank, where Juan Escalante heads twice a week. But as food prices rise for consumers, food banks are also dealing with their own financial squeeze caused by inflation and a decline in donations as they wait for the disbursement of already approved federal aid. That’s often leaving food banks with whatever food they can get their hands on to assist a growing number of people who need their help.

“There’s some items that are kind of odd,” Juan Escalante said. “Sometimes we’re like, ‘Well, we have never used this, maybe we can look up some recipes and stuff like that.” 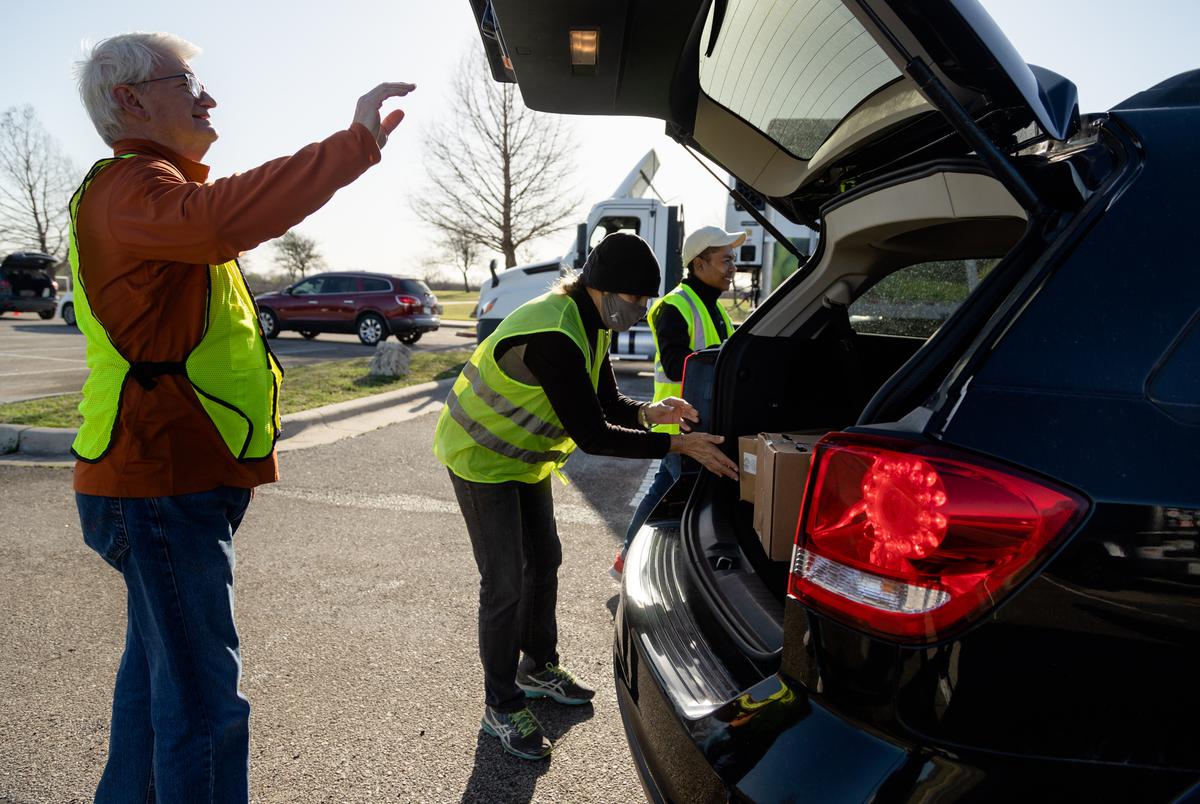 The Central Texas Food Bank served an average of 60,000 people across 21 counties each week before the pandemic, said Vindhya Ganhewa, volunteer ambassador and warehouse leader for the group. The number of people seeking help each week has since gone up by about 25%.

“We’re now serving an average of 75,000 people a week. So it’s definitely increased because of the pandemic and because of food scarcity issues in general,” Ganhewa said.

The share of Texas households experiencing food insecurity — homes with limited access to consistent meals and groceries — increased from 13% in December 2018 to 22% in June 2021, according to the Texas Research-to-Policy Collaboration Project.

Overall inflation has recently risen at the fastest rate in decades. The consumer price index in March was up 8.5% compared with the year prior, according to the U.S. Bureau of Labor Statistics. That has ripple effects throughout the food supply chain. The cost of food consumed at home rose even faster — 10% — over the past 12 months. That’s the largest one-year increase since March 1981, according to the BLS.

“Consumers are seeing inflation but also producers as well with all the input prices that they’re having to pay for, whether it be fertilizer, fuel or just parts for their equipment, to make sure they can get the crop to harvest and get it to market,” said Brant Wilbourn, Texas Farm Bureau associate director of commodity and regulatory activities.

Texas Agriculture Commissioner Sid Miller asked Monday for a halt to the inspections, which were slowing traffic before protests made matters worse.

Higher prices in production, labor and gas work their way to the shelves of grocery stores, increasing the cost of staples like eggs and peanut butter.

“It finally gets to the store, and in that case, the jar of peanut butter may cost 6% or 7% more than it did last year,” said Gary Huddleston, the Texas Retailers Association grocery industry consultant.

From left: Ross Fields, Susan Morgan and Baron Reedy work to load boxes into the trunk of a vehicle at the Onion Creek Soccer Complex in Austin. The Central Texas Food Bank operated 56 drive-thru events across the state in March. Credit: Evan L'Roy/The Texas Tribune
Ad

The Bureau of Labor Statistics reported that Texas cities such as Houston, Dallas and Fort Worth saw grocery prices increase between 5% and 6% last year. The U.S. Department of Agriculture predicts more increases this year.

Feeding Texas is a statewide nonprofit and the largest anti-hunger organization in Texas. Its 21 food bank partners receive most of their food and money to operate from two sources: the USDA and donations. Feeding Texas CEO Celia Cole said USDA assistance doesn’t always provide enough money to cover the cost of getting food to people.

Texas lawmakers allocated $95 million last year from Texas’ $16 billion share of the federal American Rescue Plan Act to food banks. But food banks have waited months for the money to arrive. On March 31, Texas Agriculture Commissioner Sid Miller said in a press release that the grants were being awarded and acknowledged the need for help since the start of the pandemic.

“Multiple crises continue to strain the ability of food banks to meet increased demand, particularly in rural and other underserved communities,” Miller said in a statement. “This investment in our food bank infrastructure and distribution networks will ensure our ability to continue responding to the needs of Texans.”

The federal grant will give food banks the financial ability to store and transport food they receive — or help renovate their facilities if needed. Cole said the funding will largely go to five primary causes: facility expansion, equipment, transportation, technology for tracking inventory and giving grants to partner agencies.

To combat financial shortfalls in the meantime, food banks have tried to increase donations. But Feeding Texas saw a drop in donations at the beginning of the pandemic and is now expecting to see another decrease.

“I definitely think inflation and kind of general economic concerns and what’s going on in Ukraine, you know, it has people worried,” Cole said. “So people tend to … be more cautious about how much they donate when they’re concerned about sort of what the future holds for them economically.”

Making do with what they can

Not all Texans who seek help at food drives or food banks are homeless or living in food deserts. According to Ganhewa, about two-thirds of the households using the Central Texas Food Bank’s services have at least one working adult at home and have turned to grocery assistance due to grocery affordability or lacking funds to buy other necessities. 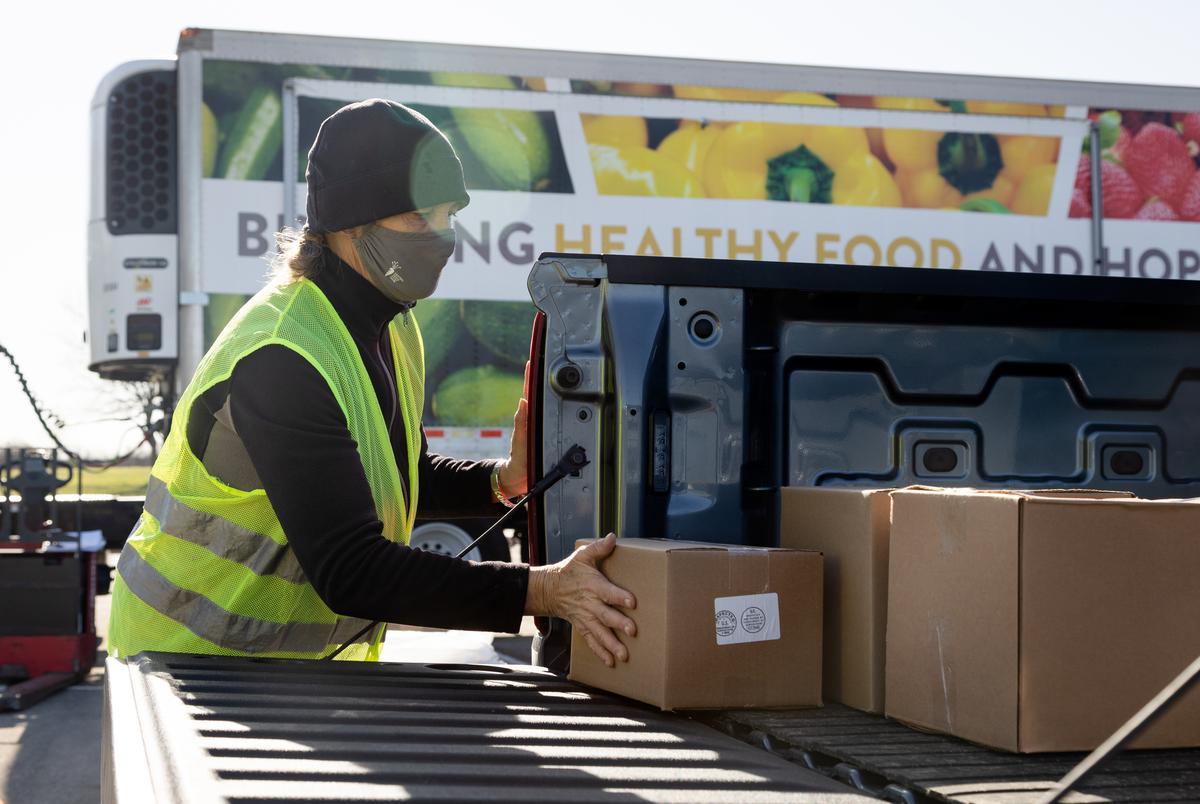 Christine Fingarson loads a box of food supplies provided by the Central Texas Food Bank into a vehicle during a drive-thru distribution event at the Onion Creek Soccer Complex in Austin on March 22, 2022. Credit: Evan L'Roy/The Texas Tribune 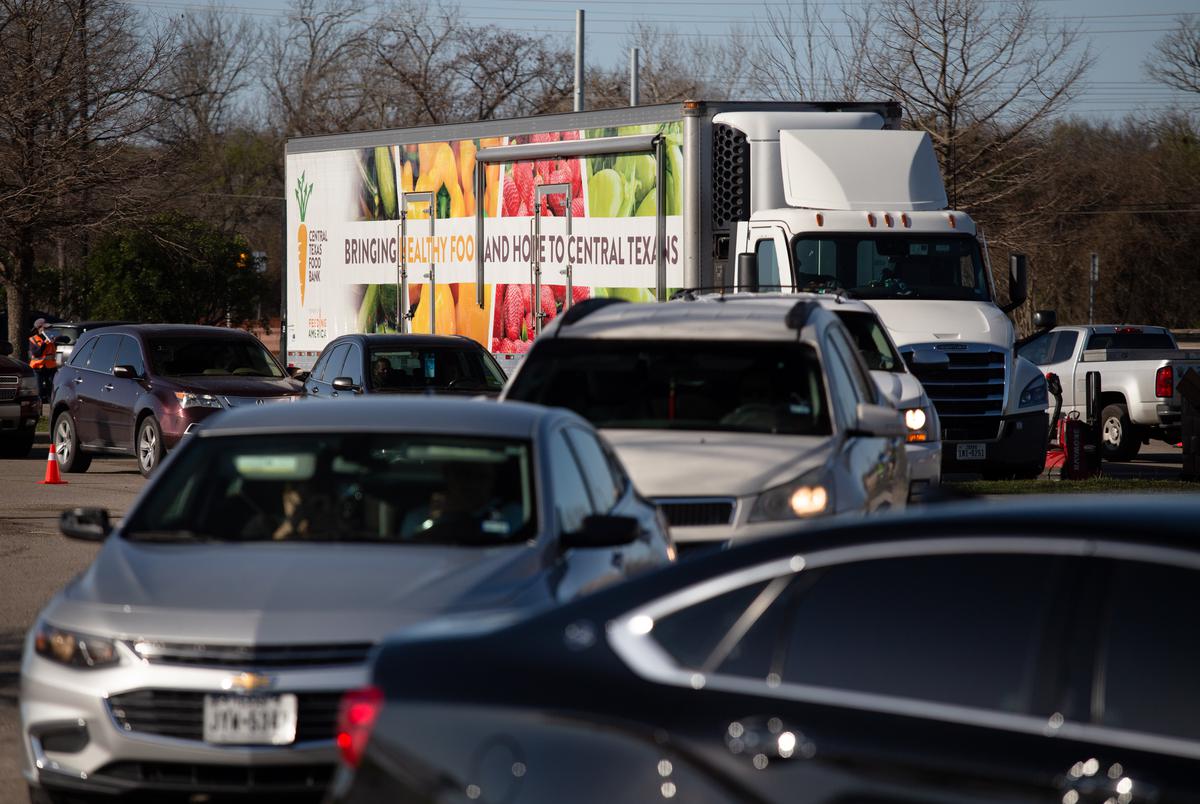 “About 80% of our clients have reported having to choose between paying for food or paying for medicine or medical care,” Ganhewa said. “About two-thirds of our clients have to choose between food and housing. So definitely when the prices are inflated when inflation in general rises, that definitely exacerbates the need that they experienced in terms of just not being able to feed themselves and their family.”

Juan Escalante lost his job after he didn’t renew his residency card on time. He’s still considered a permanent resident, but letting a residency card lapse can complicate — or prevent — someone’s ability to work until it is renewed. As he works to get the card renewed, he’s been able to find some construction work to help pay the bills. Emily Escalante works her ride-share job when she’s not caring for their three children.

The family’s income fluctuates related to the jobs they can take and the amount of time she can dedicate to driving for Uber each week. They estimate they currently bring in about $1,300 a month. Government-funded food programs help, but not completely.

“That only covers a certain amount, and with three growing little girls they, you know, they have a growing appetite with their growing body, and the money we get is not cutting enough to kind of feed all five of us at the moment,” Juan Escalante said.

He says his food bank helps round things out.

“We’re just pretty thankful for that, that they have that type of distribution going on throughout the week,” he said.

Meanwhile, food banks say they’re trying to provide as much as they can without knowing how long demand will remain elevated as their operating costs also rise and donations dip.

“It’s unclear how long the gas prices will be this high and how long we’ll be seeing inflation,” said Cole, the Feeding Texas CEO. “Obviously, you have different opinions from different economists, but I think [food banks] are all concerned because it’s caused a significant increase in their transportation costs, and that’s affecting their overall sort of operating budget. So they’re all sort of on the lookout for what this is going to mean in the long run.”

Disclosure: Feeding Texas, the Texas Farm Bureau and the Texas Retailers Association have been financial supporters of The Texas Tribune, a nonprofit, nonpartisan news organization that is funded in part by donations from members, foundations and corporate sponsors. Financial supporters play no role in the Tribune’s journalism. Find a complete list of them here.

Correction, April 13, 2022: A previous version of this story misidentified the organization that has seen a 25% increase in clients since the beginning of the pandemic and for which Vindhya Ganhewa is a volunteer ambassador. It is the Central Texas Food Bank, not Feeding Texas.