All lanes blocked on I-45 North Freeway at Airline due to multi-vehicle crash, HPD says

Major traffic delays on I-10 East Freeway at N. Main due to crash, Baytown PD says

On Saturday morning, the courtyard at Eastside Early College High School in Austin looks like a “rainbow threw up,” according to Melissa Kender.

“It’s just really important to us that kids know that we will protect them and celebrate them, no matter how they identify,” Melissa Kender said. 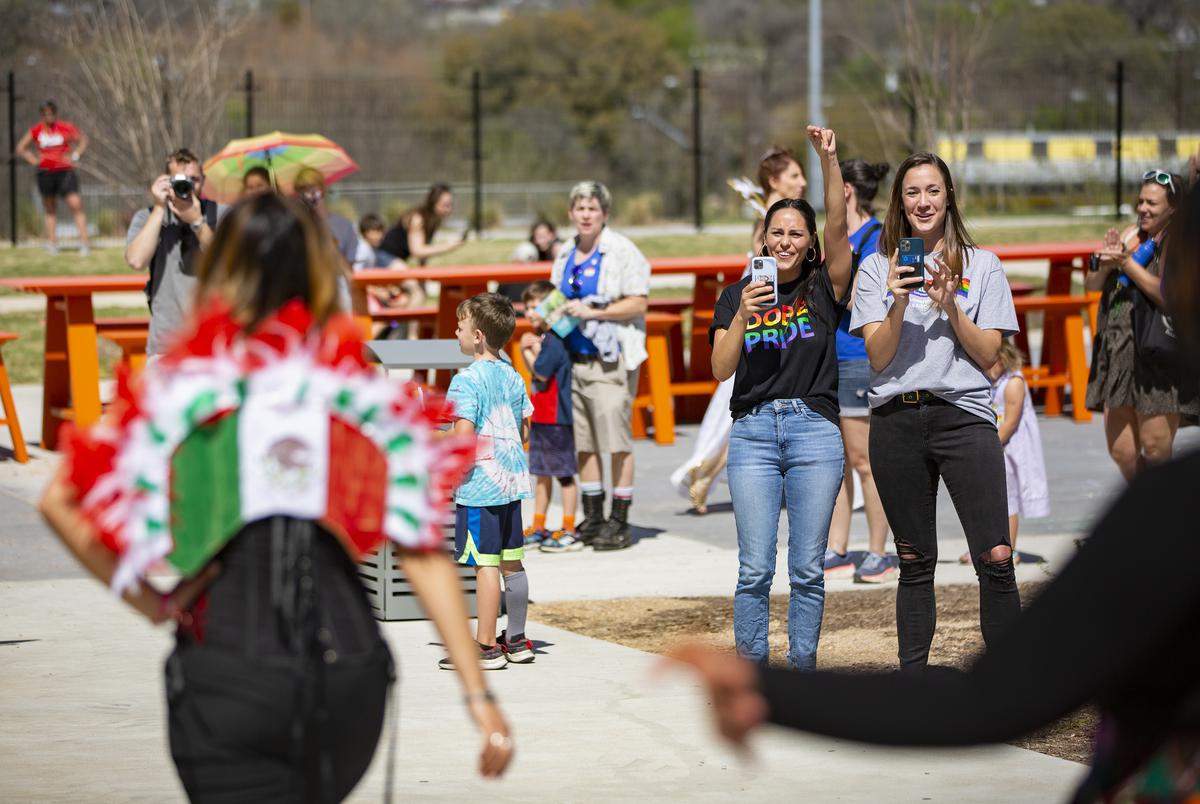 Austin ISD employees Melissa and Caitlin Kender cheer on models as they walk past during a fashion show at the district’s “Pride Out!” event at Eastside Early College High School in Austin. The Kenders have been married for a week. “When we want to establish a family, this is somewhere we want our kids to be a part of,” Melissa Kender said. They said they moved from Dallas to be a part of Austin ISD. Credit: Lauren Witte/The Texas Tribune

The kids were focused on the fun — and free Popsicles. But for many parents, teachers and administrators, attending Saturday’s event was a small act of defiance.

Austin ISD has been hosting Pride Week since 2014, largely without much attention. But earlier this week, Texas Attorney General Ken Paxton ignited a political firestorm by sending the district a letter equating Pride Week festivities with “human sexuality instruction.”

“The Texas Legislature has made it clear that when it comes to sex education, parents — not school districts — are in charge,” Paxton wrote.

In Texas, parents are required to opt their children in to sex education after being properly notified about the content of the material that’s going to be taught. But the district rejects Paxton’s suggestion that Pride Week needs to go through the same channels.

“This is not about sex education,” district spokesperson Cristina Nguyen said. “This is really a week about inclusion … acceptance and celebrating everyone for who they are and being their authentic self.”

Every school did different kinds of events for Pride Week, Nguyen said. Some elementary schools had students bring in family photos to highlight different family structures. Some older students watched a recent episode of the Netflix show Queer Eye that featured the school district.

Third grader Juniper Dreyer said Pride Week was “pretty casual” at her school this year. The school had tables where students could get rainbow flags or buttons, and teachers talked to them about accepting everyone, even if they are different from you.

She said the main message was that it’s good to be inclusive.

“Put yourself in other people’s shoes,” Dreyer said. “If you were that person, you wouldn’t feel very good to be insulted.”

Paxton’s letter focused on “community circles,” discussions some schools hosted on sensitive topics. One school said in the event description that students should keep the conversations confidential, “presumably from parents,” Paxton added.

Nguyen acknowledged that the wording was “a little opaque,” and they meant that students shouldn’t gossip among themselves about what was discussed in the circles, not that they should keep it from their parents.

Emily Habermehl’s kids were running around Saturday’s event, faces painted and Popsicle-stained. She said she had complete faith in the district to teach these subjects in age-appropriate ways. 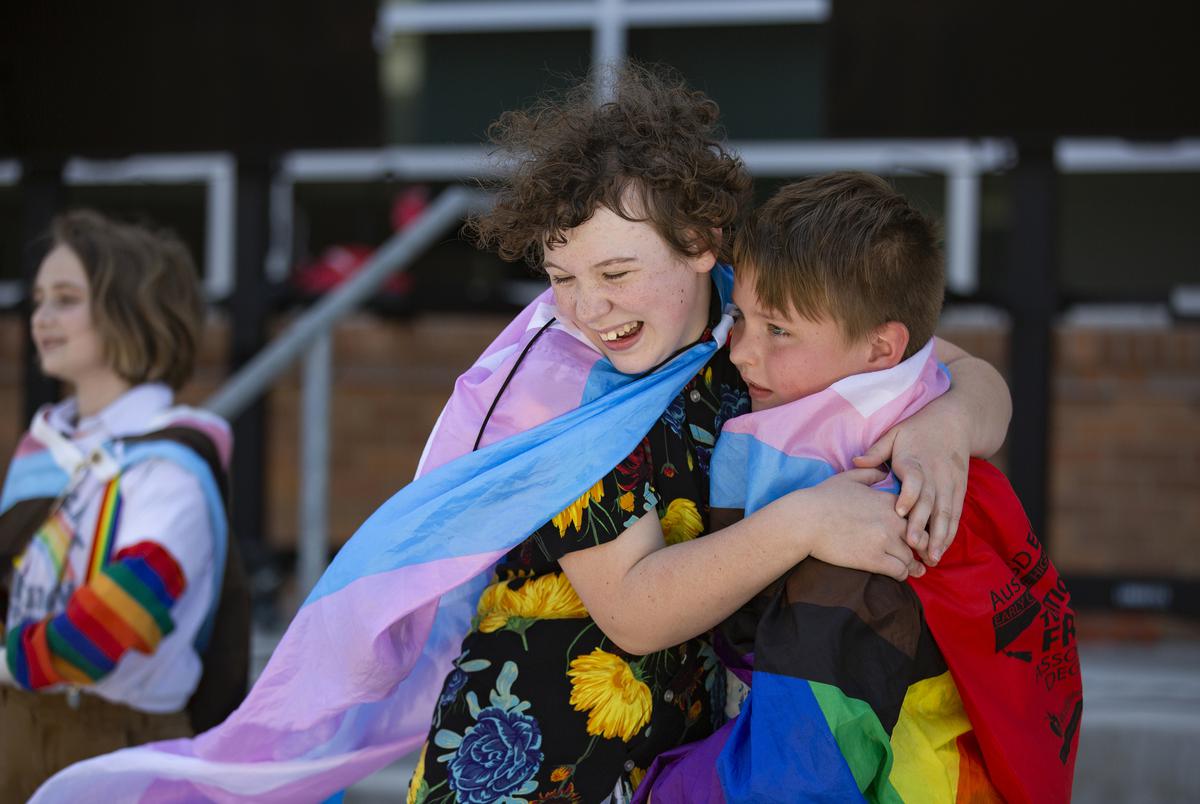 Rae Fenton, 12, hugs brother Eli, 7, as he joins him on the stage during Diamond Dior Davenport's performance. "I love drag queens," Rae said. "They're the biggest idols of my life." Credit: Lauren Witte/The Texas Tribune 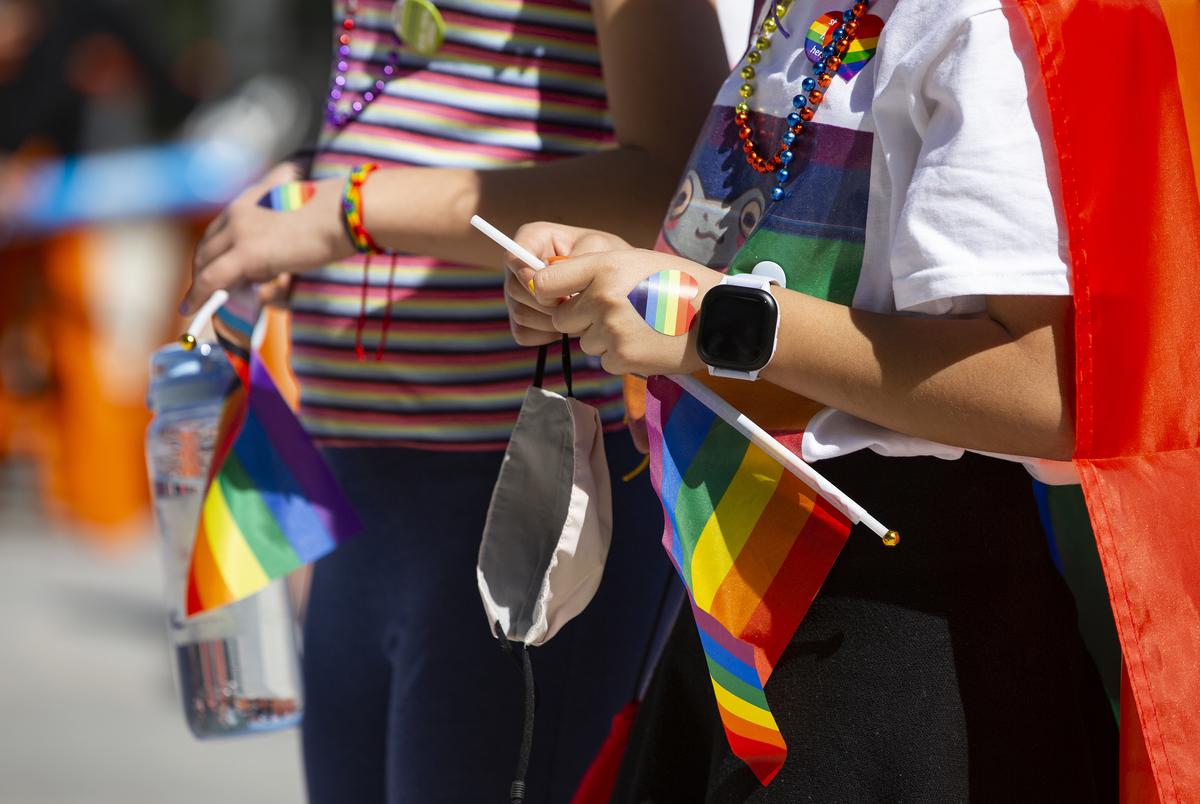 “AISD has earned our trust, because they’ve shown us the right way to go about teaching this stuff,” she said. The teachers, she said, are “the expert on this stuff. Do your thing.”

Nguyen said the district has’t received any complaints from Austin ISD parents, but it has gotten a deluge of hate from around the country. It’s gotten voicemails from people as far away as Kentucky, and Twitter has flagged its account because of the volume and nature of responses it’s receiving.

Teachers from Doss Elementary School, which was at the center of the “community circles” controversy, have been doxxed and received death threats on social media, where they’ve been called groomers, pedophiles and child abusers, Nguyen said.

The school moved its Pride Parade inside and brought on additional police presence as a result.

But the political pushback has not discouraged Austin ISD, Nguyen said.

“If we have learned anything from all this, it’s that we need to double down even more to support our students that are facing all of this … politicization and hate speech.”

Paxton’s letter comes amid a surge of anti-LGBTQ activity from Texas elected officials. Last month, Paxton issued a nonbinding legal opinion that it could be considered child abuse to provide gender-affirming care to transgender children.

Gov. Greg Abbott, citing that opinion, directed the state’s child welfare agency to open investigations into parents who help their children access puberty blockers, which are reversible; hormone therapy; or gender-affirming surgeries, which are rarely used on children.

A state court has blocked the agency from investigating these parents, a decision that an appeals court upheld. Paxton has asked the Texas Supreme Court to overturn the injunction.

Gin Pham, community engagement specialist for the Transgender Education Network of Texas, was at Saturday’s event, distributing literature about the ongoing fight to protect transgender rights.

“So many of our events lately, so much of our work has been about the trauma that these kids are facing right now,” Pham said.

But they said “it feels really, really good” to get out on a sunny Saturday morning and see all of these young people and their families just having fun in a safe, inclusive community. 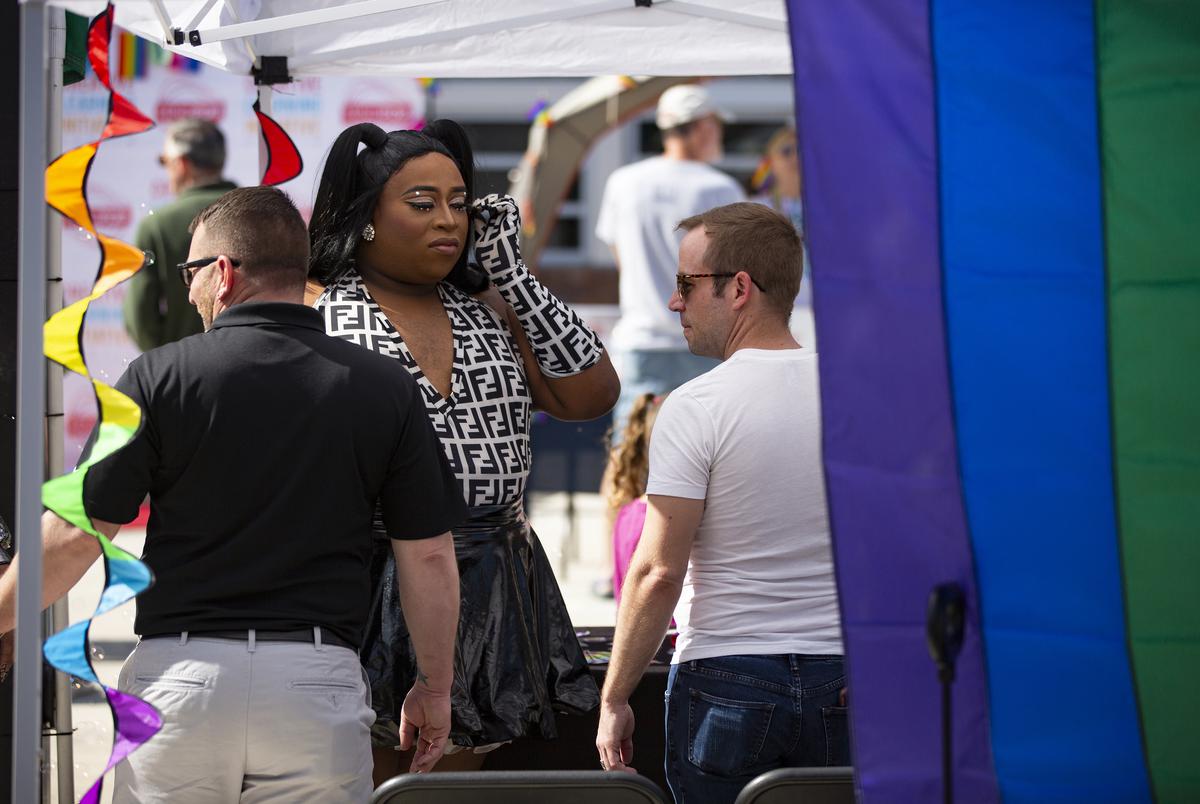 The event concluded with a performance by some of Austin’s most popular drag queens, hosted by Diamond Dior Davenport. It’s the second Pride Week performance for Davenport and her fellow Austin ISD grad, Marilyn Williams, at the invitation of their former teacher, Medina Willis.

Willis, who still teaches in the district and helped organize some of the “Pride Out!” events, said Davenport and Williams were sometimes seen as troublemakers back in the day.

“But I just knew, they were going to be awesome one day, when all their talent gets a chance to come out and be recognized,” she said. “It’s so awesome to see that energy be directed to something positive, once they’re given a chance.”

Davenport said it’s hard to put into words what it would have meant to have an event like this when she was in school.

“It makes me so happy to see these kids living like this and their parents showing them the LGBTQ lifestyle at a young age,” she said. “It’s such a beautiful thing because it allows them to see that we’re all humans.”

And to Paxton and other elected officials who want to shield kids from this information?

“They can kiss my ass,” Davenport said.