10 warnings in effect for 10 counties in the area

10 warnings in effect for 10 counties in the area

MIDLAND — After Russia invaded Ukraine last month and the U.S. and major energy companies boycotted Russian oil and gas, some politicians quickly called for cranking up American energy production to fill the void.

And U.S. Rep. August Pfluger, R-San Angelo, who represents the heart of Texas’ oil patch, has printed red, white and blue baseball caps with an oil pump jack next to the words “Midland over Moscow.”

“The energy producers of [West Texas] and America are READY to produce the energy our nation and allies need!” Pfluger wrote on Twitter. 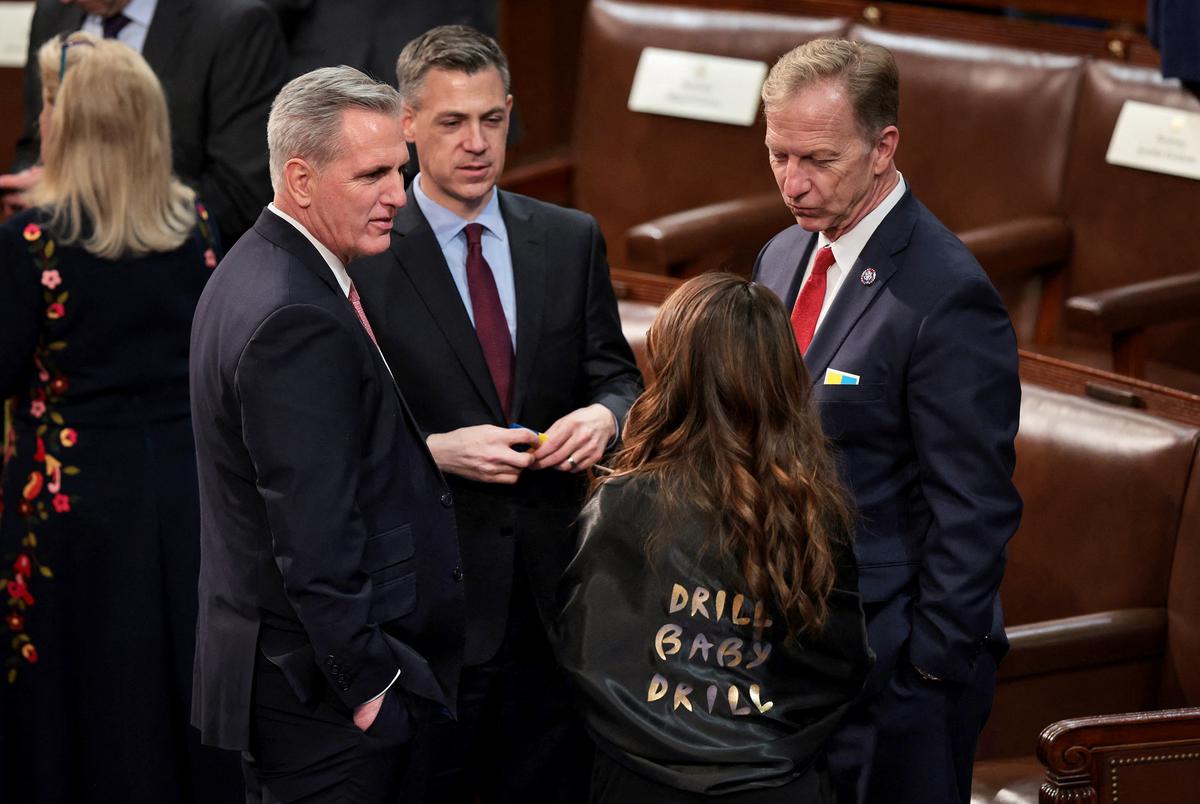 But in Texas’ Permian Basin — the nation’s most productive oil region and the place that would have to lead any jump in U.S. production — people in the industry, energy analysts and local leaders say there’s no quick or easy way to make that happen.

Cranking up production requires more workers, materials and money, and people in the industry say they’re facing the same labor shortages and supply chain issues that have plagued countless businesses throughout the COVID-19 pandemic. On top of that, they say Wall Street investors have become more hesitant about pouring money into fossil fuels, and the Biden administration’s policies are hampering the oil and gas industry.

“It’s hard to get pipe, sand, crews for drilling rigs, truck drivers,” said Mike Oestmann, CEO of Tall City Exploration, a company that drills oil wells in West Texas and has two active rigs that drill 32 wells per year combined. He said the scarcity of supplies, equipment and people “is unlike anything I’ve ever seen.”

He said frac sand — a key ingredient in the hydraulic fracturing process — has been particularly hard to find due in part to labor shortages, even though much of the supply comes from Texas. The price of steel has increased so much that supply shortages make it hard to get pipe for drilling wells, he added. Oestmann said his company has no plans to add more drilling rigs, but even if it did, he said it probably wouldn’t be able to find the supplies to do so.

“And I talked to a guy yesterday — a bigger company than us — trying to ramp up his operation to six rigs, and he goes, ‘I don’t know if I can get all the things I need to do that,’” Oestmann said.

John Volke, CEO of Crew Support Services — a company that houses oil field workers in temporary quarters known as “man camps” — says his company has filled every one of its 1,500 beds in the Permian.

“Every one of our clients are trying to hire 20 to 40 people — field hands, labor for rigging pipe,” Volke said. “I don’t know where these people went to work, Amazon?” 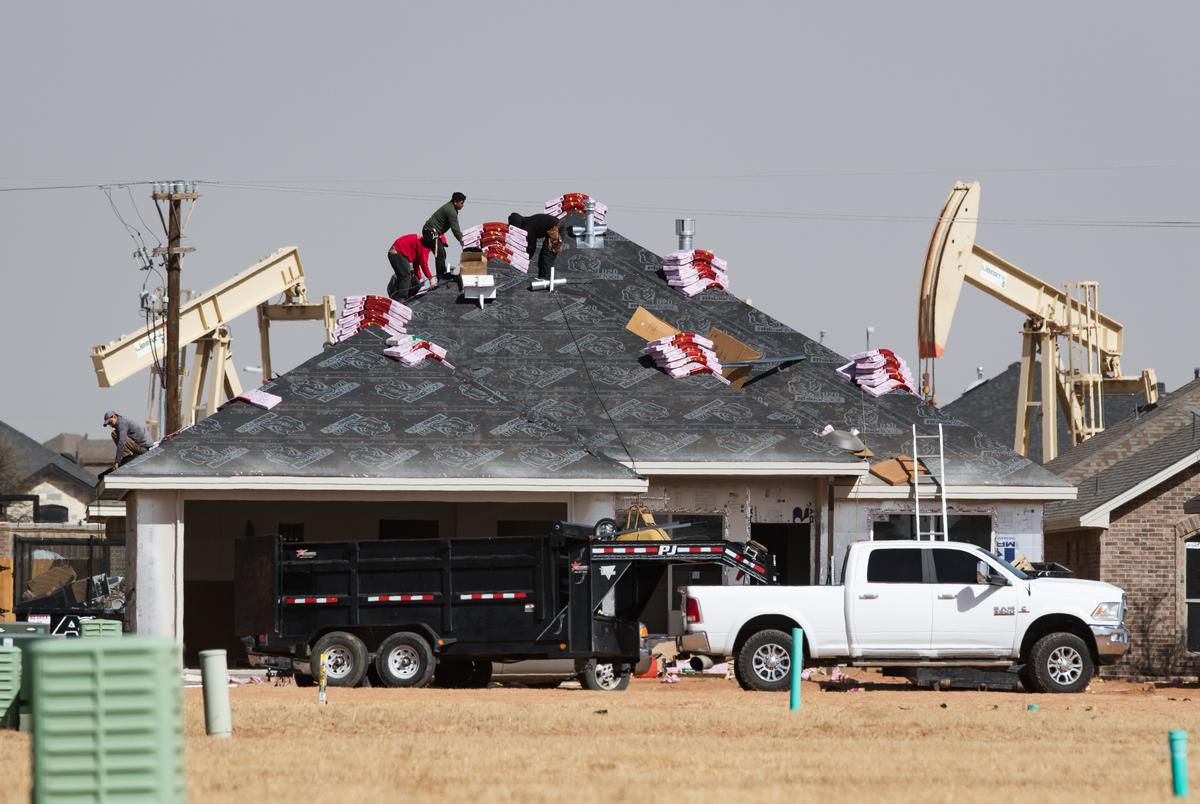 A roofing crew begins to shingle a home under construction in the new Pavilion Park housing development on March 14, 2022 in north Midland. Credit: Eli Hartman for The Texas Tribune 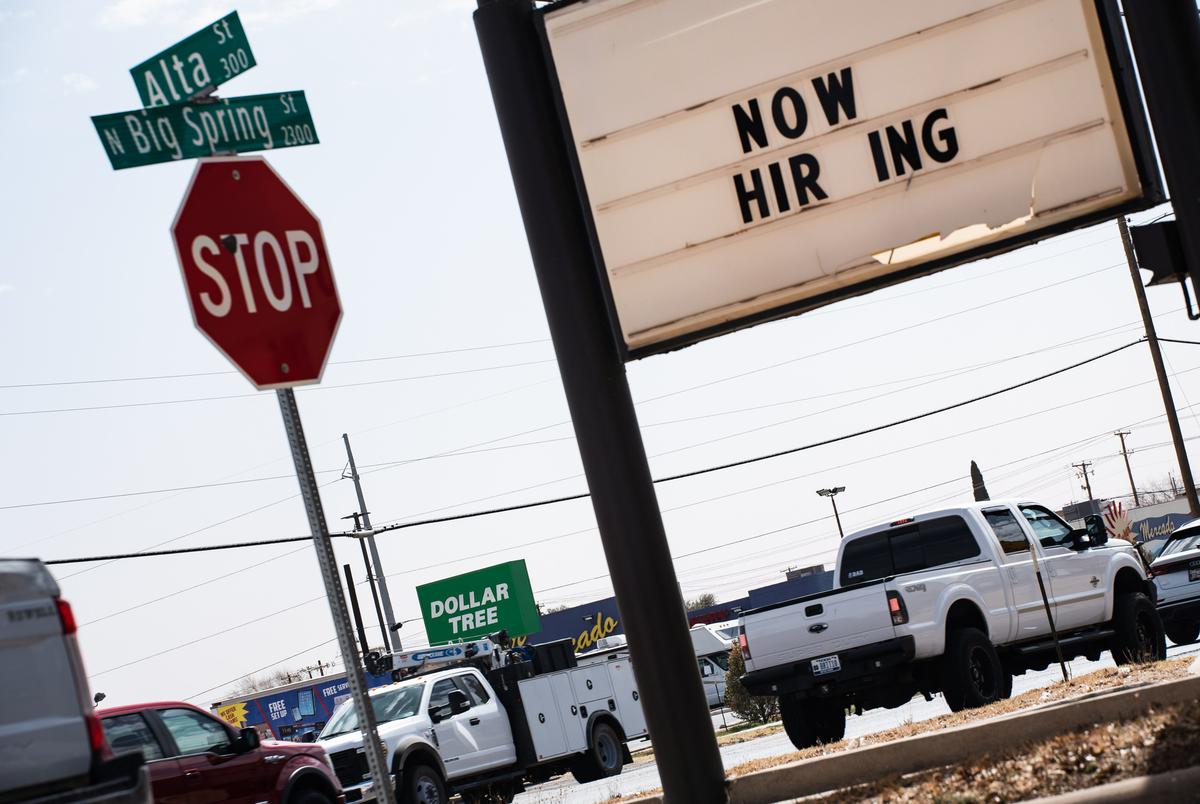 First: A roofing crew begins to shingle a home under construction in a new Midland housing development as a pumpjack operates nearby. Last: Motorists drive past a sign hiring workers in Midland. Credit: Eli Hartman for The Texas Tribune

Oestmann said when the demand for oil and gas plummeted at the start of the pandemic, many oil field workers got out of the industry for good.

“We quit drilling for a year, a lot of people slowed down,” Oestmann said. “All those people that were working in the field, a lot of them just said, enough’s enough. I’m out.”

Juan Cano left the industry in 2019 and isn’t returning.

The 57-year-old has worked many jobs over the years — driving trucks, laying asphalt and now fixing vehicles at a Midland auto shop. Like many people living in the Permian Basin, he’s been lured into oil field jobs during previous booms. But even with oil-related businesses desperate for workers and the price of oil topping $100 a barrel following Russia’s invasion of Ukraine, Cano said the appeal of more money isn’t strong enough this time.

“I don’t want to go back into that up and down swing,” Cano said last week outside the auto shop. “It’s not stable, especially now with everything going on in the world.” 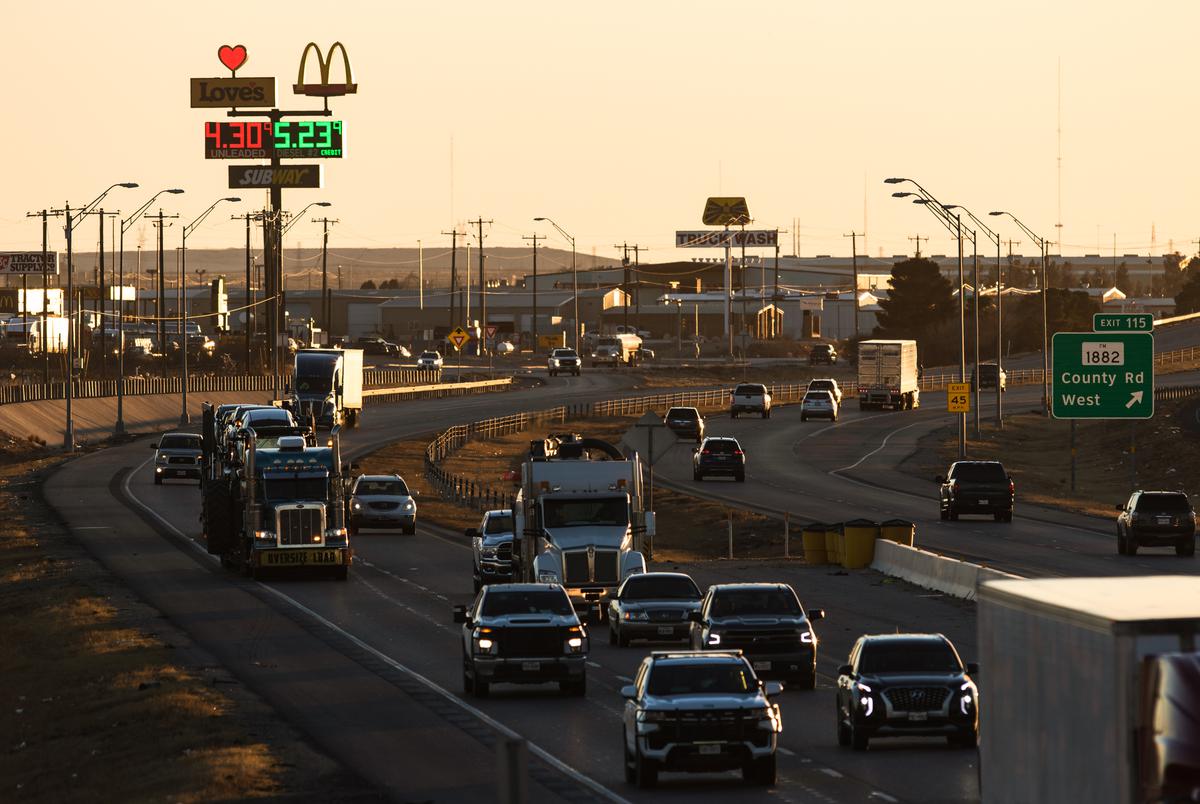 Motorists drive along Interstate 20 past a gas station in Odessa. Credit: Eli Hartman for The Texas Tribune

The Biden administration announced a U.S. boycott of Russian oil on March 8, but only about 7% of U.S. oil imports come from Russia. A handful of other countries like Britain and Canada, plus some major energy companies like ExxonMobil and Shell, have also stopped buying Russian oil. The International Energy Agency estimates that by April, 3 million barrels per day of Russian oil production could be off the global market “as sanctions take hold and buyers shun exports.”

But nearly all European countries that rely heavily on Russian oil haven’t followed the U.S. lead, and Biden hasn’t pushed other countries much on the issue for fear that such a boycott could hurt the world economy more than it hurts Russia.

The world consumes around 100 million barrels of oil per day, and Russia produces about 11.2 million barrels per day, making it the third-largest producer behind the U.S. and Saudi Arabia. The IEA, which was formed after the 1973 oil crisis to ensure a steady worldwide energy market, said the repercussions of Russia’s invasion are likely to grow over the next several months as summer driving season begins. 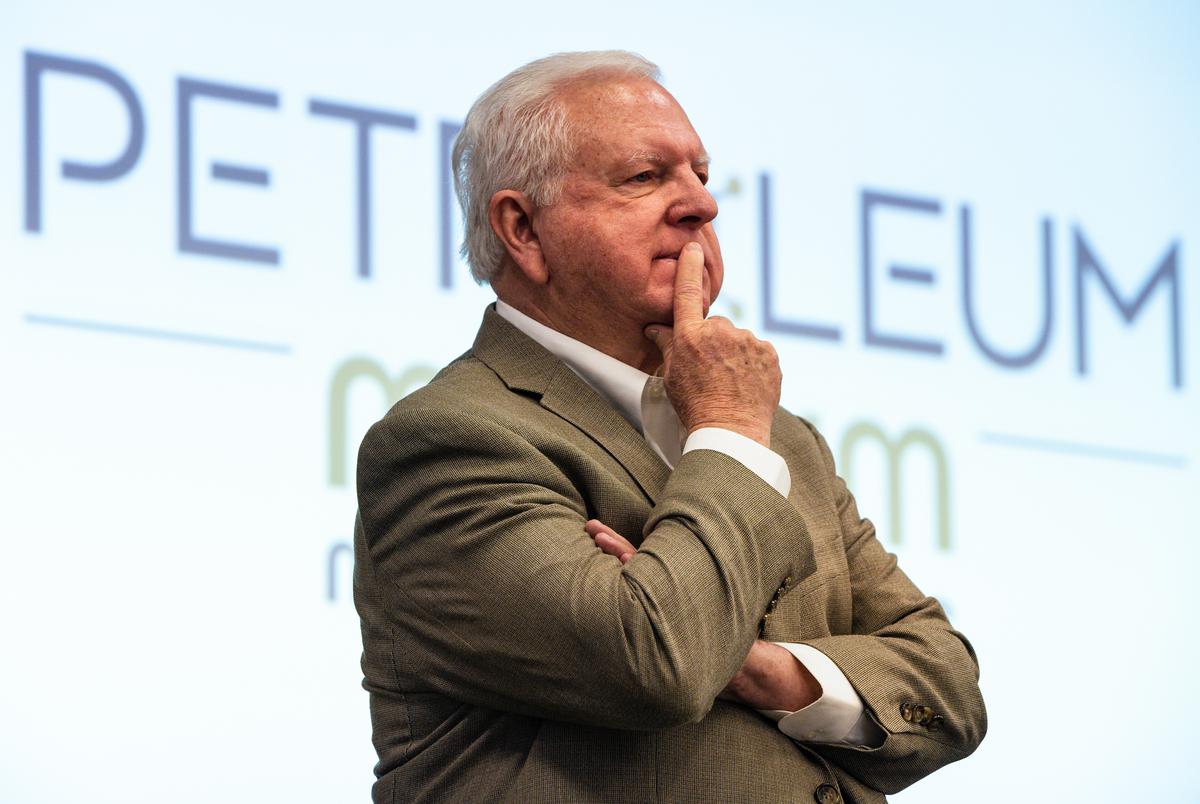 “The world may well be facing its biggest oil supply shock in decades, with huge implications for our economies and societies,” said IEA Executive Director Fatih Birol, citing the uncertain future of Russian supplies on the global market as the war continues and sanctions against the nation mount.

In the U.S., no place drills for oil as much as the Permian Basin. As of March 11, the region had 316 oil rigs in the ground — the number continually flashes on a large screen in downtown Midland along with the current temperature. The rest of the U.S. had 212 rigs, according to the Federal Reserve Bank of Dallas. (Each rig can have dozens of individual wells.) The Permian produces more than 5 million of the nation’s daily output of 11.6 million barrels of oil per day.

Local officials say the war in Ukraine, which has pushed the price of oil up 58% from the start of the year, will boost profits for the oil and gas already being produced in the Permian Basin.

“When the world’s supply is interrupted, which it is, it just makes our product that much more important,” Bobby Burns, president of the Midland Chamber of Commerce and the city’s former mayor, said last week at the Permian Basin Petroleum Museum.

“We’re of mixed minds” about the Russia-Ukraine conflict, Burns added. “We know it’s strengthening our bottom line, but it’s bad for the world.” 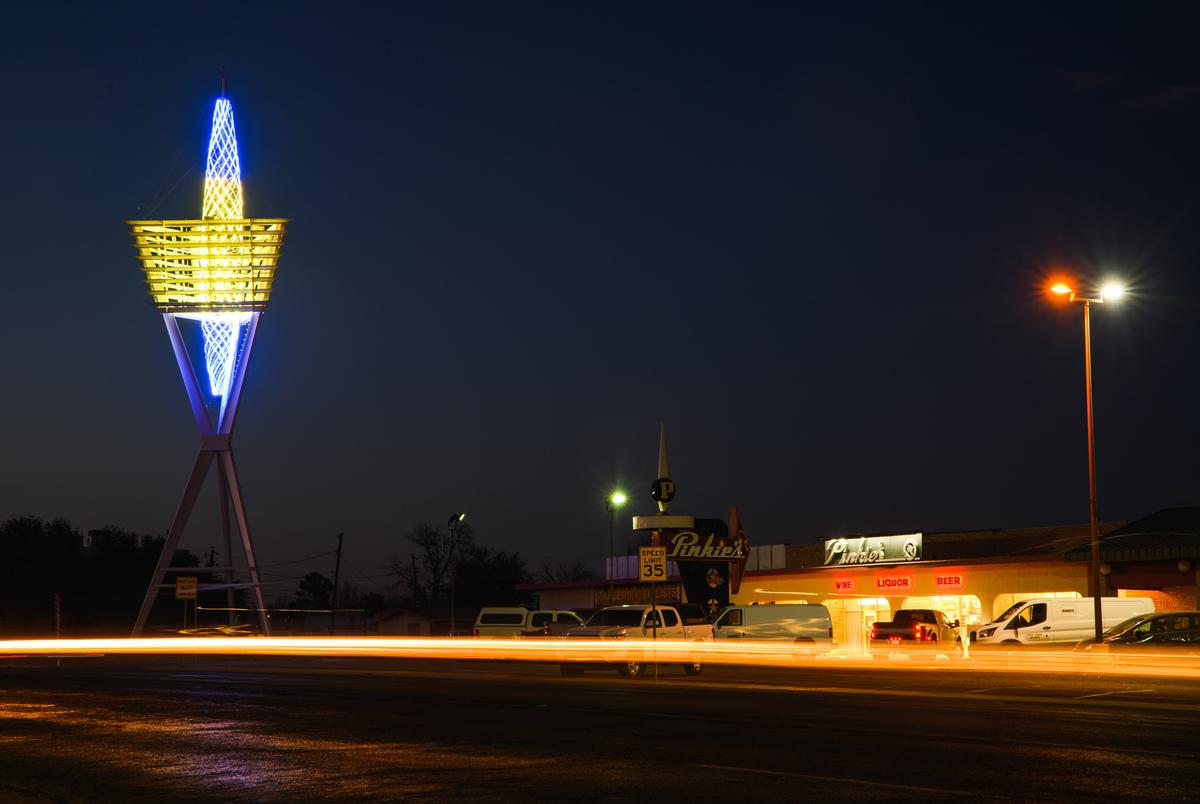 The Odessa Spire is lit in the colors of the Ukrainian flag in support of Odessa’s sister city in Ukraine after Russia’s invasion of that country. Credit: Eli Hartman for The Texas Tribune

Some investors are less bullish on oil investments

To significantly boost production in the Permian, companies have to secure major financial backing.

Historically, that backing has come from Wall Street, which “has dictated tremendously what goes on in the industry out here,” said Stephen Robertson, executive vice president of the Permian Basin Petroleum Association, adding that drillers decide how much oil to produce “one way or another based on signals [they] are getting from Wall Street.”

Prior to the pandemic, Wall Street was already starting to see oil and gas as a riskier investment because of environmental concerns, said Steven Beach, dean of the business school at the University of Texas Permian Basin.

For example, the Rockefeller family — which became wealthy and famous in the late 1800s from founding the Standard Oil empire, whose successors include Chevron and ExxonMobil — sold off all its fossil fuel investments in 2015 because of concerns about climate change.

Other investors have cooled on the energy sector for purely bottom-line reasons. More than half of 132 oil and gas executives surveyed by the Dallas Fed said this week that pressure by investors to provide a better return on investments is the main reason energy companies are “restraining growth despite high oil prices.”

Beach said energy company shareholders “were wondering why their companies produced so much oil and gas from 2017-19 and it was so dirt cheap, and at the end of the day, they didn’t really make much money out of it.”

Matt Coday, president and founder of the Oil & Gas Workers Association based in Odessa, blamed the Biden administration’s decisions on energy policy for some of investors’ hesitancy to put money into the industry. He said Biden signaled to the industry on his first day in office that he does not support oil and gas by suspending the Keystone XL pipeline.

Still, the world relies heavily on oil and gas, and Beach said the ongoing labor shortages, supply chain problems, and financial and political uncertainty are creating major headwinds for energy companies trying to meet the demand.

“The confluence of these issues are making it more challenging for companies to decide whether they’re going to start ramping up production again,” Beach said.

Disclosure: The University of Texas Permian Basin, Exxon Mobil Corporation and the Permian Basin Petroleum Association have been financial supporters of The Texas Tribune, a nonprofit, nonpartisan news organization that is funded in part by donations from members, foundations and corporate sponsors. Financial supporters play no role in the Tribune’s journalism. Find a complete list of them here.