Body of 7-year-old missing from north Texas found; Officials arrest delivery driver who was dropping package off at her home when she disappeared

62-year-old fugitive wanted for Aggravated Sexual Assault of a child under 14, officials say

The construction of border barriers in the Rio Grande Valley could jeopardize a rare Texas plant’s survival, according to U.S. Fish and Wildlife Service scientists.

The federal agency on Monday proposed an endangered species designation for the prostrate milkweed, a native South Texas plant that has lost habitat to the invasive species buffelgrass, which quickly colonizes patches of land cleared for development — including for the construction of border barriers.

“Depending on the alignment, construction [of border barriers] would obliterate prostrate milkweed plants” in one area of the plant’s habitat, a U.S. Fish and Wildlife Service’s species status assessment report said.

All known U.S. populations of prostrate milkweed are found within 8 miles of the Rio Grande, scientific studies show.

“We’ve always known it’s quite a rare species,” said Chris Best, the state botanist for the U.S. Fish and Wildlife Service in Texas who worked on the agency’s proposal.

The Fish and Wildlife Service will make a final decision on the endangered species designation in a year. If approved, the designation would set aside 691 acres of habitat in Starr and Zapata counties deemed critical to the plant’s survival — including land in a national wildlife refuge in Starr County where U.S. Customs and Border Protection had scheduled road improvements and planned border barrier construction. President Joe Biden paused most border barrier construction when he took office.

In Starr and Zapata counties, 24 communities of prostrate milkweed remain, according to an analysis by the U.S. Fish and Wildlife Service. Almost 80% of those communities have very low numbers.

Eight more communities are known to be scattered throughout Mexico. More plants might exist in Texas, but since much of the land is held by private landowners, and because the plant can survive dormant underground for months to years at a time, it’s excessively difficult to survey.

Best worked at the Lower Rio Grande Valley National Wildlife Refuge for 16 years and said whenever staffers found the plant in the field, “everybody would be like, ‘God, look at that, prostrate milkweed! That’s incredible.”

Construction that clears land — whether for border security activities, oil and gas wells, wind turbines, or county roads — destabilizes and destroys the soil that the prostrate milkweed needs to thrive, while giving an advantage to its aggressive buffelgrass competitor. Buffelgrass was intentionally introduced to South Texas from Africa by the federal and state government in the 1950s to help ranchers stabilize overgrazed and parched soil.

In one survey of a community of prostrate milkweed plants in Zapata County, 200 plants were identified between 1988 and 1993. After a fiber optic cable was installed in the highway right-of-way location, by 2017, only one plant was found.

Endangered species designations generally slow land development by requiring the federal government to take additional protective measures for the plant or animal at risk before issuing the permits necessary for construction.

But environmental lawyers said it’s unclear whether a border wall would be blocked or even slowed by an endangered species designation for the prostrate milkweed. The federal Department of Homeland Security has routinely waived environmental laws to allow border wall construction on federal land, and endangered plants on state and private lands have fewer protections under the Endangered Species Act.

“[The waivers] basically create a law-free zone,” said Brian Segee, a senior attorney with the Center for Biological Diversity, which sued the Fish and Wildlife Service to move faster to list the prostrate milkweed, along with dozens of other potentially endangered species.

The Trump administration ultimately built only about 21 miles of new border barrier along the 1,200-mile Texas-Mexico border before Biden paused most of that work upon taking office. But Gov. Greg Abbott has since pursued a state-funded border barrier and began construction in Starr County — one of the only known places in Texas where the prostrate milkweed still grows.

Nan Tolson, a spokesperson for Abbott, wrote in a statement that Abbott believes the endangered species proposal shows the Biden administration’s priorities are wrong.

“Instead of stepping up to protect innocent lives from human traffickers and stopping the influx of deadly drugs like fentanyl from coming across our border, President Biden has instead chosen to focus on protecting plants,” Tolson wrote. 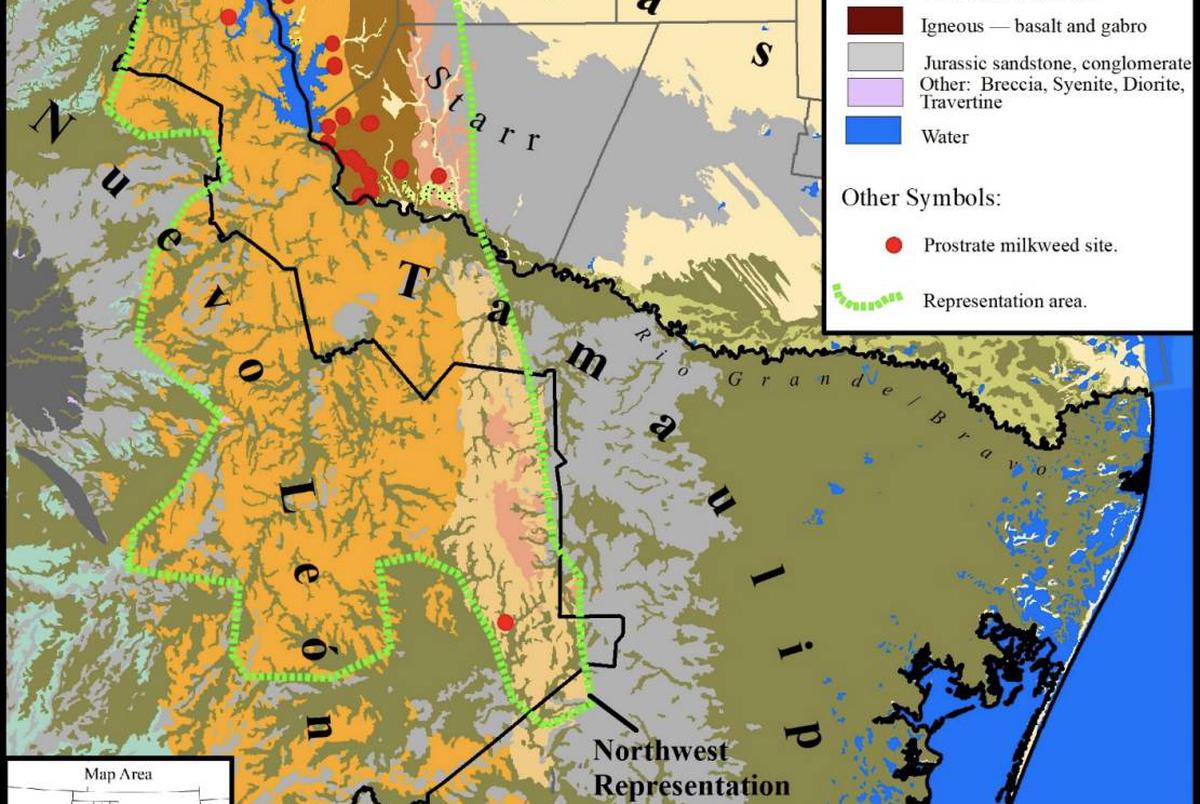 Lawyers at the Center for Biological Diversity said that the designation would not prevent border barrier construction by the federal government because the law only requires federal agencies to take additional steps for protection, such as setting aside other habitat for the species at risk.

And it wouldn’t do much to slow construction of a state wall. The law does not require private landowners or state agencies to take precautions to protect endangered species’ habitat on their land unless the construction requires a federal permit.

Because most of Texas’ land is privately owned, the future of the prostrate milkweed will largely depend on the actions of landowners along the border. Best, the Fish and Wildlife botanist, said some landowners have already agreed to conservation easements, cooperated with scientists to conduct studies and partnered with nonprofit organizations to protect the plant’s habitat.

“It’s part of the natural heritage of the region,” Best said. “When rare species like this start to disappear, it’s a warning that things are out of kilter, and if we don’t fix it, we’re going to lose more species.”