When Pam Kutner heard the gunshot, she froze.

Kutner, the executive director of Congregation Beth Israel in Houston, participated two years ago in an active shooter training where trainees were instructed to run, hide or fight when a simulated gunshot went off. But she said she couldn’t move once it did.

“I’ve never heard that sound before,” she said.

After last weekend’s hostage situation in Colleyville, she said she aimed to practice and commit the lessons from that training to muscle memory.

On Jan. 15, a gunman held four hostages in a standoff that lasted around 11 hours at Colleyville’s Congregation Beth Israel, a synagogue northeast of Fort Worth not affiliated with Kutner’s. The FBI said Friday it is considering the incident a terrorist act and hate crime.

All four hostages escaped before FBI agents shot and killed the suspect, authorities said. A rabbi who was among the hostages said undergoing training scenarios for how to deal with active threats prepared him for that day.

Those types of trainings are now common. Religious leaders in Texas, concerned about the violence and threats against places of worship in recent years, have spent hundreds of thousands of dollars and countless hours on training, security and preventive measures in case of an attack. 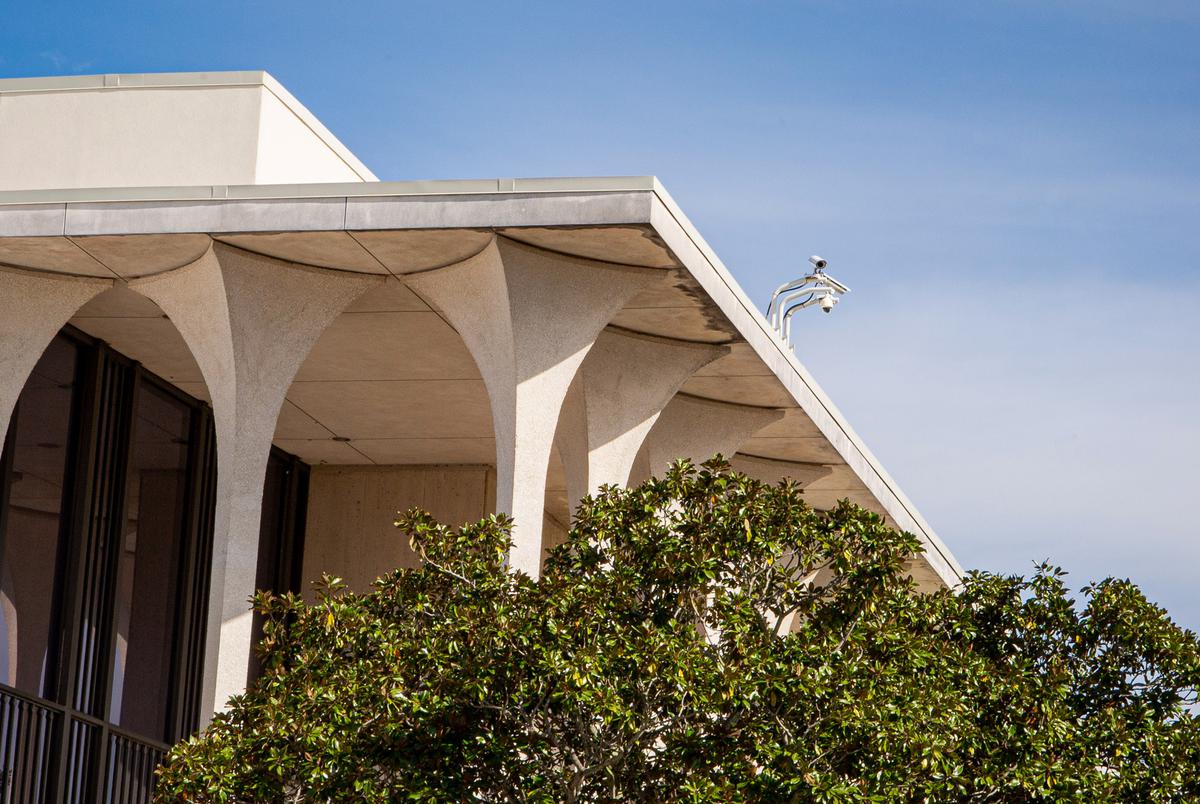 A history of violence

Religious communities in Texas have been the target of several deadly attacks in recent years. In 2017, a gunman opened fire inside First Baptist Church of Sutherland Springs, killing 26 people and injuring 20 more — the deadliest shooting in an American place of worship in modern history.

In 2019, days after Christmas, a shooter attacked the West Freeway Church of Christ in White Settlement, killing two people and injuring one.

Hate crimes committed against people because of their religion made up 20% of all hate crimes reported in the U.S. to the FBI from 2015-20. In 2020 the percentage was lower than average at 15%. However, the FBI’s reporting of hate crimes is thought to be a vast undercount because it relies on local police to voluntarily submit data, according to a 2019 report by the U.S. Commission on Civil Rights.

In addition, attacks and hate acts against Jewish people are on the rise. Over the past five years, antisemitic incidents have increased by 60%, according to the Anti-Defamation League, an anti-hate organization. Advocates fear last weekend’s hostage situation could spur further violence and threats.

Kutner said preparing for potential attacks is just part of the reality of being Jewish.

Congregation Beth Israel of Houston typically spends about $175,000 a year on hiring Houston law enforcement officers to patrol its campus, she said. The synagogue is large — with an annual budget of $5 million — so while its budget for security personnel is significant, Kutner said it’s manageable.

On a normal day, there are at least two guards present at all times, carrying guns and wearing full police gear. That number increases depending on how many congregants are expected to visit the synagogue.

Kutner said her synagogue has always poured a lot of time, energy and funds into security. The building has bulletproof windows, a check-in system to track who is on the campus at all times and cameras that cover “every square inch” of the property. Whenever the building is being used, at least one security guard is required to be present. 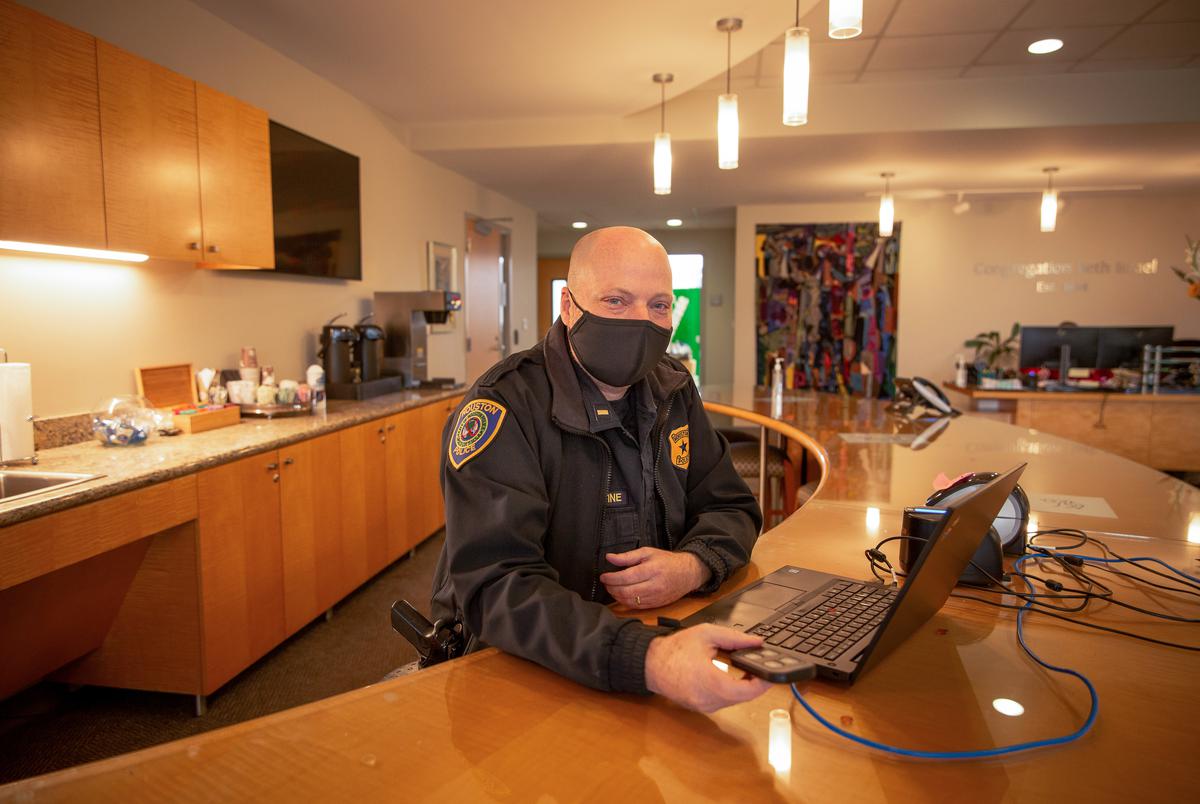 Houston Police Department Lieutenant Ed Valentine registers visitors to the Congregation Beth Israel premises on Jan. 21, 2022. He is in his third year assisting synagogue security and considers himself a part of the community. Credit: Briana Vargas for The Texas Tribune

On Jewish high holidays, the precautions are even greater. Over 1,500 congregants could be in the building, she said, so the synagogue employs as many as 15 security guards, along with bomb-sniffing dogs.

At the Islamic Center of San Antonio, Fridays are the busiest days of worship. But joining visitors are up to half a dozen armed off-duty law enforcement officers on patrol. Security cameras protrude from the building, keeping a record just in case.

Just like the Houston synagogue, the San Antonio mosque is on constant guard against attacks.

Religious groups have always been the target of hatred, said Michael Martin, a spokesperson for the center. While the mosque has never faced an attack, he said it could be next at any time.

But not every religious organization pays for security guards each week.

In 2019, Texas made it legal for visitors to carry guns inside places of worship, unless congregation leaders prohibited them. And in 2017, Texas passed a law that made it legal for churches to have armed volunteer guards. Many congregations enlist their own members to keep careful watch — and use deadly force if necessary.

In the 2019 church shooting in White Settlement, the carnage stopped when the gunman was shot and killed by the head of the church’s volunteer security team.

“It is our duty to preserve life,” said Eric Ogea, who runs Protex and has trained churches on what to do during attacks. “And sometimes preserving life is defending life.”

Ogea teaches people to have an exit strategy first before confronting an intruder. The congregation should know where the exits are, who is going to call 911 and if there is a medical expert in the group.

But Ogea also teaches his clients a last recourse — using deadly force. Ogea trains religious leaders and churchgoers on firearm safety and how to use guns if necessary.

The Department of Homeland Security provides money to houses of worship and other organizations at high risk of becoming targets of terrorism to help them bolster security against attacks and hate crimes.

Kutner said synagogues rely on those funds to help pay for security efforts. However, that money doesn’t help pay for permanent security personnel, she said. If those funds were freed up to do so, she said it could be a game-changer, especially at smaller houses of worship that cannot afford security otherwise.

Many anti-hate advocates have called for those funds to be increased as well, and those calls became louder after last weekend’s attack.

Being welcoming vs. being ready

Ellen Smith, 20, has attended Congregation Beth Israel of Colleyville since she was a kid. And when the gunman held her rabbi hostage, she listened in horror to a livestream as the events unfolded until it cut out.

Smith said she thinks she’ll continue to carry that anxiety with her in religious spaces. On Monday, she attended a healing service at a church near her synagogue meant to bring the community together after the attack.

“Every time the back door opened in the middle of the service, I tensed up,” she said. “And I think that that’s just how it’s going to be in the future — it will always be in the back of my mind no matter where I go, if it’s a Jewish space.”

Smith drew comparisons to the school shooting drills she went through in high school. She said she always kept an eye on exits and had an escape plan in case of an active shooter.

“I think now that that’s going to be the same sort of thought process I’ll have walking into a synagogue,” she said.

Still, Smith said she does not support having armed police officers present in religious spaces.

“My understanding of Judaism specifically [is that] it should be a welcoming space where everyone feels welcome and safe,” she said. “And I think that while it might make some people feel safe, it also might stop other folks from entering, like Jews of color or Jews with a criminal record or even homeless people who are looking for a safe place to come in.”

She feels the same way about congregants carrying guns.

“I think that if someone had a gun on Saturday, that situation might not have ended with every hostage getting out safely,” she said. “I personally would not feel safe if people had guns in services.”

Kutner, with the Houston synagogue, said she thinks the benefits of having police officers present outweigh potential costs.

“I believe safety is much more important than being welcoming,” Kutner said.

She noted that the officers know the congregants by name and are a familiar and friendly presence. And although her synagogue doesn’t allow congregants to carry firearms inside, she said she would consider employing volunteer security guards if a lack of funds made hiring police impossible.

Kutner said members of religious organizations must be prepared to put safety first. She thinks that the Colleyville situation could have been avoided by simply not opening the door.

The gunman from last weekend reportedly entered the synagogue after knocking on the glass door. The rabbi, Charlie Cytron-Walker, let him in and made him a cup of tea.

“Would you open your door to your house for a homeless person? I mean, I wouldn’t,” Kutner said. “So that’s something that we talked to the staff about as well. … We also are relying on the staff to be alert to notice things and to determine if they should or shouldn’t open the door.”

But Cytron-Walker said he’d offer a stranger a cup of tea again.

“This was one individual,” he told NPR. “Even if they do not look like the stereotypical person who’s going to come into a Jewish synagogue, I want them there. … I want them to know that they are going to belong. Hospitality means the world.”

That’s the struggle, Kutner said: In the end, religious leaders must balance their desire to foster welcoming and friendly places with practices that could potentially save lives.

“It’s just the world we live in,” Kutner said.