Harris County Precinct 5 Deputy Charles Galloway: This is what we know so far about fallen deputy

A Twitter meme posted on Friday by the Republican Party of Texas that compared waiting in line for COVID-19 tests to waiting in line to vote quickly provoked anger from the left, giddiness from the right, and rose to one of the top trending posts on the platform that day.

In other words, experts on propaganda and internet misinformation said, the meme did exactly what it was intended to do.

“The goal is to further divide people, but divide them by making them feel they’re part of a group,” said Sam Woolley, an assistant professor at the University of Texas at Austin who also serves as the project director for propaganda research at the Center for Media Engagement.

He added that such an approach is “driven by a perspective that other people who don’t believe what you believe are the enemy, rather than fellow Americans.”

The meme, which came from the official account for the Texas GOP, used a photo of a COVID-19 test site line in New York and included the text, “If you can wait in line for hours for testing … You can vote in person.” It was a message that some critics said suggested that excessive waiting times are acceptable and that made light of issues that disproportionately affect communities of color.

Such memes, according to experts, are part of a growing political social media strategy that has become successful in recent years: Package complicated information into short, simplified bites, and use it to divide people into distinct groups that are opposed to one another.

“You are being rage farmed,” John Scott-Railton, a senior researcher of disinformation and cyberattacks at the University of Toronto’s Citizen Lab, wrote in a tweet to people who were reacting angrily to the meme. He said that responding to the tweet was providing the GOP with a bigger megaphone: “Your angry quote tweet = the goal.”

Polarizing memes have become more prominent in American politics since the election of former President Donald Trump, said Woolley, adding that social media accounts for Republicans and Democrats have used them as tools. On the left, Occupy Democrats, a group that publishes wide-reaching political posts on its website and social media accounts, has utilized such polarized memes to build a social media following on Facebook. Far-right Republican groups have used politically divisive memes to attack supporters of expanded voting measures, Black Lives Matters protestors and to push against masks and vaccines.

But Woolley said the Texas GOP’s meme is distinct because it was released from the official social media account of a political party. The meme marks a departure from the account’s typical photo posts, which tend to focus on legislation, events, and announcements.

“It's uncommon, and especially concerning, that this comes from the official Texas GOP account,” Woolley said.

A spokesperson for the Republican Party of Texas said in a statement to the Tribune that it’s hypocritical for the Biden Administration to allow people to stand in line to get a COVID-19 test, but endorse voting-by-mail as a means to reduce the spread of COVID-19 from standing in line and in-person interactions. 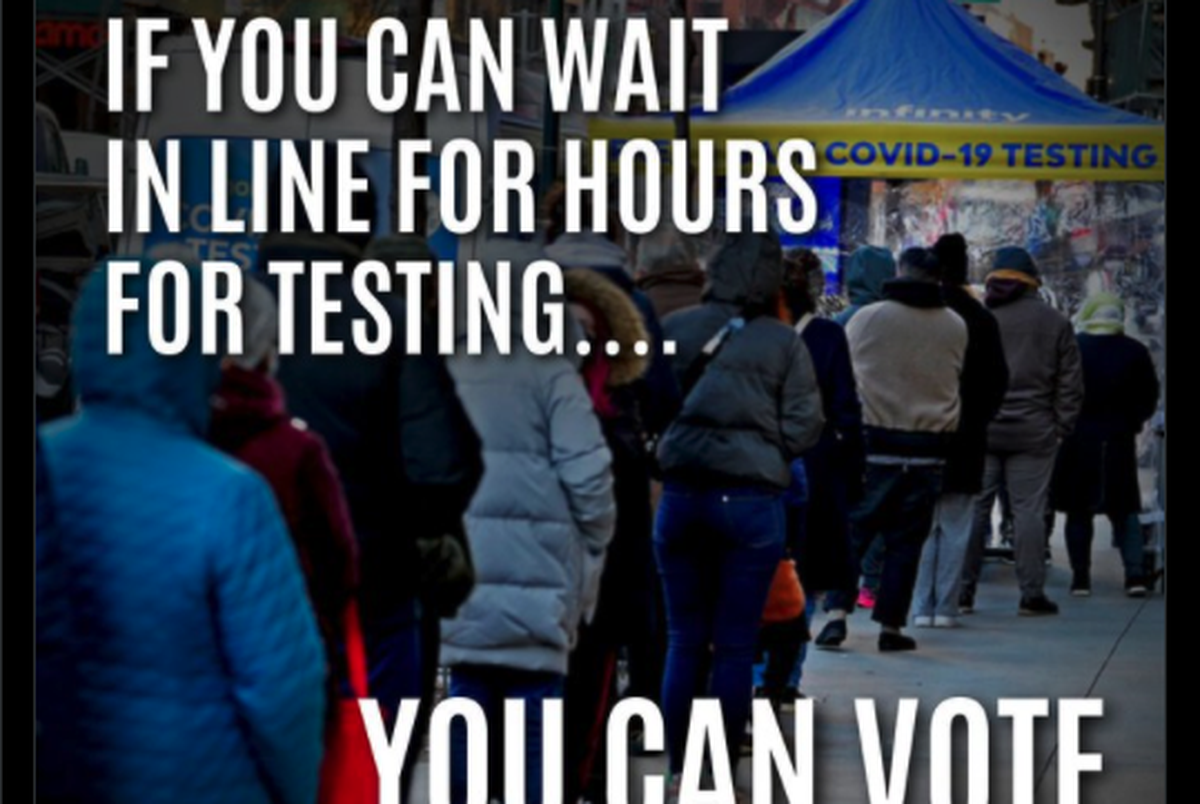 “If one is safe, so is the other,” James Wesolek, spokesperson for the Republican Party of Texas, wrote in a statement. “We enjoyed watching liberals lose their minds when confronted with the truth yesterday.”

Similar rhetoric to the one used in the Texas GOP meme on Friday emerged in far-right social media posts as early as spring 2020. Public health experts and election security experts had recommended that states use mail-in ballots as an alternative to in-person voting to avoid spreading the coronavirus to vulnerable populations. In response, far-right groups began sharing memes that compared waiting in line to vote to other common activities for which people have to wait in line.

The formula evolved in the summer of 2020 when Black Lives Matter protests swept the nation in response to the police killing of George Floyd. Former President Donald Trump tweeted on Aug. 19, 2020: “IF YOU CAN PROTEST IN PERSON, YOU CAN VOTE IN PERSON!”

The Friday meme, which followed the same formula, drew criticism from several Democrat politicians, policy experts and other Twitter users who said COVID-19 testing and voting should be made more accessible by the government, and that lines create delays and challenges that disproportionately disenfranchise voters of color.

The tweet garnered more than 12,000 retweets and more than 52,000 likes by 9 p.m. Saturday on Twitter. The angry reactions increased attention on the meme, something the Republican Party recognized in a later tweet, pointing out that “Texas GOP” was Twitter’s No. 4 trending topic in the U.S. on Friday.

“Cry more,” another post by the Texas GOP stated, after saying that the meme made “pronouns in bio people” mad.

The anger tends to overly simplify what may otherwise be a complex bipartisan issue, said James Slattery, a senior staff attorney at Texas Civil Rights Project, which advocates for equal access to voting in elections.

The longer voters must wait to cast their ballots, the less likely they are to vote, Slattery said. He said the leading causes of long voter lines in Texas in recent elections stemmed from staffing shortages during a surge of voter turnout, lack of resources or training for poll workers that causes machine malfunctions and logistical problems, and polling place closures in the state. Texas counties have closed more polling places than any other state, according to a 2016 analysis by the Leadership Conference on Civil and Human Rights.

“State and local governments should make it easier for people to vote because at the end of the day it’s about holding those governments accountable,” Slattery said. “Voting is not like almost any other activity in our society. You have a fundamental right to vote that is critical to the survival of our democracy.”

Correction, Jan. 10, 2022: An earlier version of this story incorrectly stated that the Texas Legislature passed new voting restrictions this year. It was during last year’s legislative session.