‘I don’t want to think the worst’: 63-year-old grandfather missing, family fears his disappearance could be related to his son’s murder case

Bells for Abigail: 10-year-old Devarjaye Daniel narrows in on his goal of being sworn-in by 100 law enforcement agencies

Oscar Rosales: What we know about the man wanted in shooting death of Pct. 5 Cpl. Charles Galloway

“Out of sight, out of mind”: Omicron and Christmas collide in Texas

SAN ANTONIO — Just two days before Christmas, 70-year-old Jeanone LaMoy had to do some last-minute shopping Thursday and waited nearly an hour to get inside the jewelry store Pandora at the North Star Mall in San Antonio.

LaMoy was looking for some jewelry that wouldn’t arrive before Christmas if she ordered it online. She didn’t hesitate to make her way to the packed mall where hundreds of people were also finishing up their shopping.

LaMoy, who is fully vaccinated against the coronavirus and has her booster, was shopping without a mask and wasn’t worried about the new omicron variant. She believes she has enough protection to get through the rise of the new variant without any issues. She is more worried about those who refuse to get vaccinated.

“The people that don't get vaccinated need to worry,” she said. “They think they're invincible, but they're not.”

The omicron variant of COVID-19 seemingly hasn’t brought major disruption to the holiday shopping or Christmas worship season even as it spreads rapidly across the state and country with some second-guessing plans with loved ones — and others canceling them altogether. After nearly two years of navigating the pandemic, many Texans see the latest increase in infections with a different mental outlook than they had when the pandemic first arrived in 2020 — and are approaching it with varying degrees of precaution.

Early data shows omicron may be milder but spreads faster than the delta variant. Medical experts expect that people who have been fully vaccinated and recently gotten a booster shot will still be much better protected from serious illness or death. There is still little known about how severe omicron will be for those who are unvaccinated or have been recently fully vaccinated.

For LaMoy, Christmas will not be interrupted by the new COVID variant. She will have a small get-together with some family just as planned. With vaccines available and having learned how to live with the virus, she thinks last year's pandemic is different from what we’re seeing now. 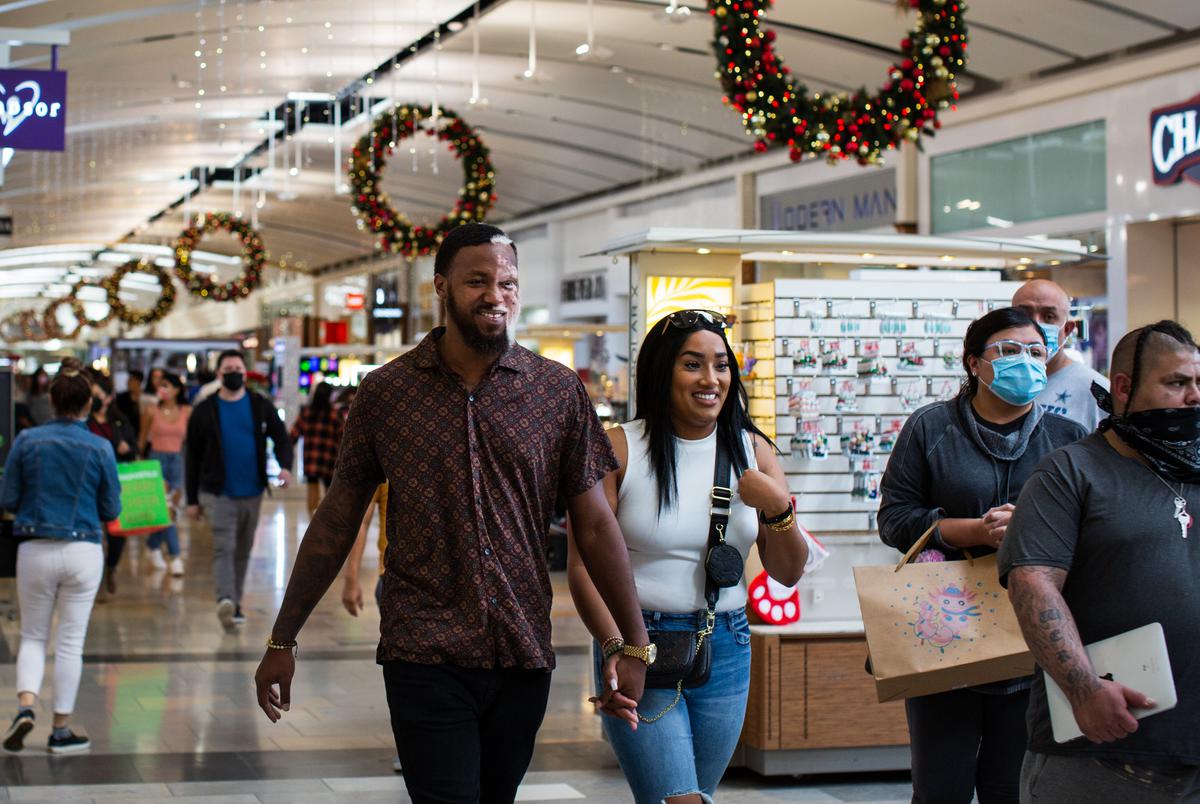 Thousands of people filtered through dozens of stores while hundreds waited in lines to comply with social distancing inside some shops at the North Star Mall in San Antonio on Thursday, Dec. 23. Credit: Kaylee Greenlee for The Texas Tribune 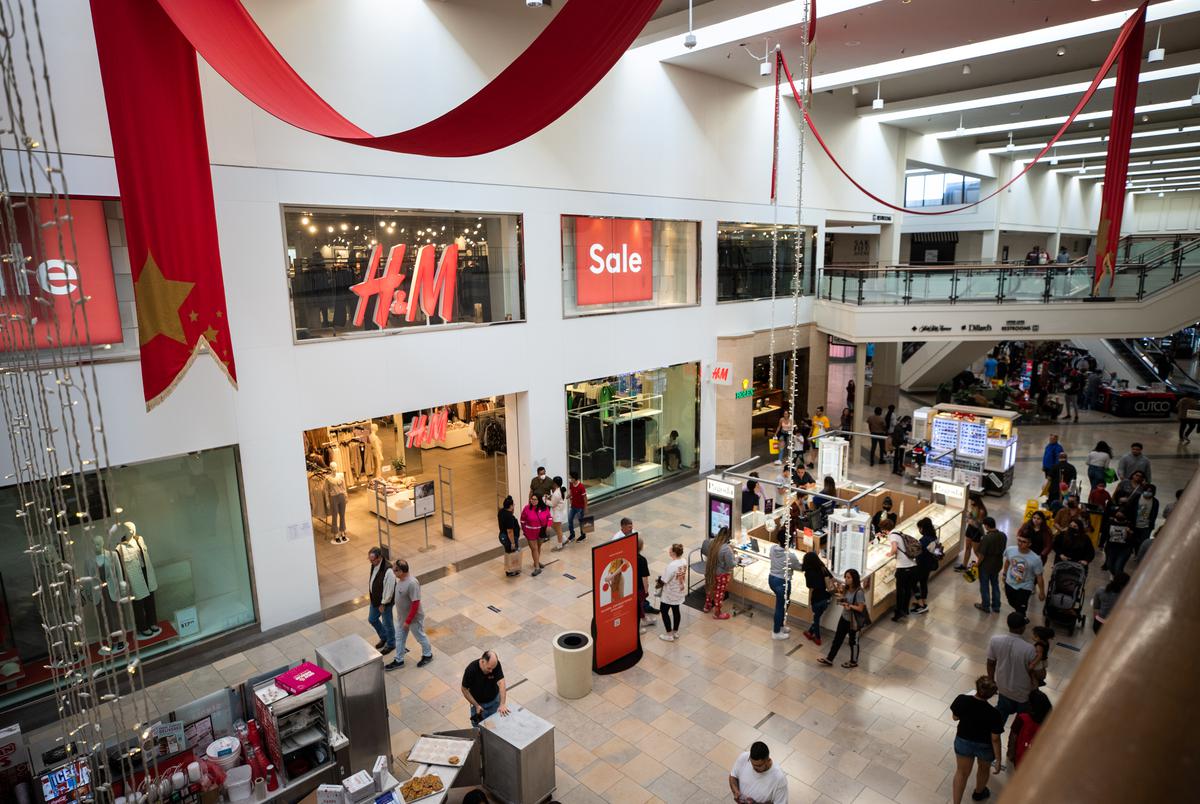 A family waited to enter the Lego store in compliance with social distancing recommendations at the North Star Mall in San Antonio on Thursday, Dec. 23. Credit: Kaylee Greenlee for The Texas Tribune

Thousands of people filtered through dozens of stores while hundreds waited in lines to comply with social distancing inside some shops at the North Star Mall in San Antonio on Thursday. Credit: Kaylee Greenlee for The Texas Tribune

Genevieve Ramirez, a shopper at the mall, said when COVID first hit almost two years ago, she went out only when it was necessary. But with the vaccine available and her family being fully vaccinated, they’ve been living life normally and she says the omicron variant won’t threaten that.

Dr. Peter Hotez, dean of the National School of Tropical Medicine at Baylor College of Medicine and co-director of the Texas Children’s Hospital Center for Vaccine Development, said that the culture in Texas compared to other states that have higher vaccination rates may translate to more people catching the virus here.

“The huge number of unvaccinated, the lack of mask-wearing culture, the lack of access to testing and then now this omicron variant — I think this could be a part of the country that’s hit very hard in the coming weeks,” he said.

Hotez also called it “profoundly disappointing” that omicron spreading so rapidly was happening during the holiday season.

“This is tough, right?” he said. “The more we can encourage the use of masks and booster doses, which are so essential, and keeping gatherings modest in size, I think that could save a lot of lives.”

At this point in the pandemic, Ramirez believes it has to come down to people making choices for their own health and, for the most part, people have learned to live with the virus.

For the faithful, in-person worship carries on

“Most folks are at a place and point in life where there's an increased recognition that COVID is going to be a reality that we are living with for the indefinite foreseeable future,” Barnett said. “For the church, for Christians in particular, we are relational. … Those needs are best met for them in person.”

Churches across Texas are moving ahead with their scheduled Christmas Eve and Christmas Day services, though many are also providing livestreamed services for people to view at home.

At First Methodist Church, Barnett said they will host their six Christmas services across three campuses, which include a children’s Christmas Eve service with a live Nativity scene and music, plus a more traditional service with an orchestra of around two dozen musicians.

While Barnett said he’s seen a few more people in masks at church over the past few weeks, he hasn’t seen a huge change in behavior. The church doesn’t require masks.

This year, the Texas Legislature passed a law that doesn’t allow a government to shut down a church, even during a pandemic.

In a letter to parishioners, Bishop Mark Seitz of the Catholic Diocese of El Paso said that while he had no intention of limiting capacity within the churches for the Christmas season, all parishioners who attend in-person must wear a mask indoors, regardless of their vaccine status.

He also said that parishioners who are not yet vaccinated should get the vaccine and a booster shot.

“Not one more person should be lost because they failed to use this simple measure,” Seitz wrote. 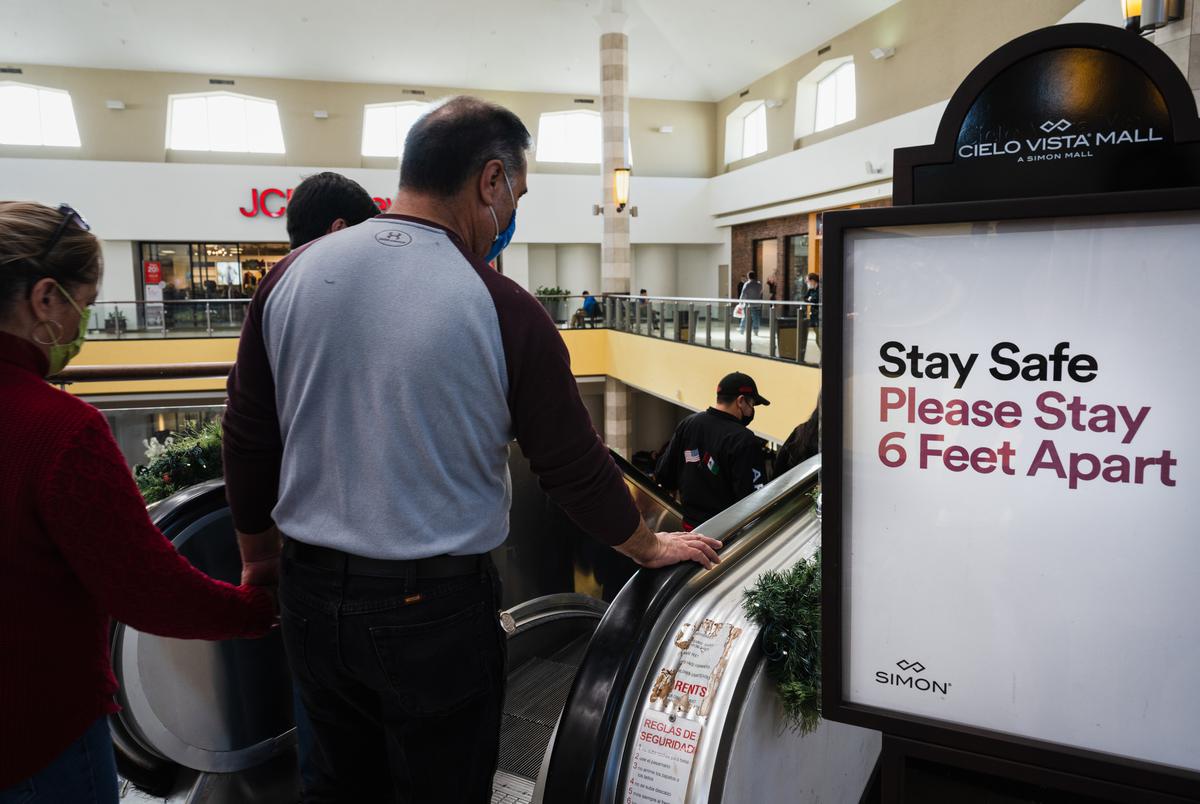 Christmas shoppers descend an escalator, as a sign urges shoppers to maintain social distancing at the Cielo Vista Mall in El Paso on Thursday. Credit: Justin Hamel for The Texas Tribune

“Out of sight, out of mind”

In El Paso, Interstate 110 going south to Ciudad Juárez was congested with bumper-to-bumper traffic Thursday, as people headed to Mexico for Christmas Eve, the day many Mexicans celebrate the holiday. Cielo Vista Mall, the biggest one in El Paso, was filled with hundreds of people, some of whom wore masks while many others didn’t.

Just northeast of downtown, nearly a hundred people lined up outside La Rotativa, a food supply store that sells corn-based products to make tortillas, menudo or tamales, on a warm and bright Thursday morning.

The store’s front door had a sign that said it required customers to wear a mask and only four people at a time could be inside to shop. 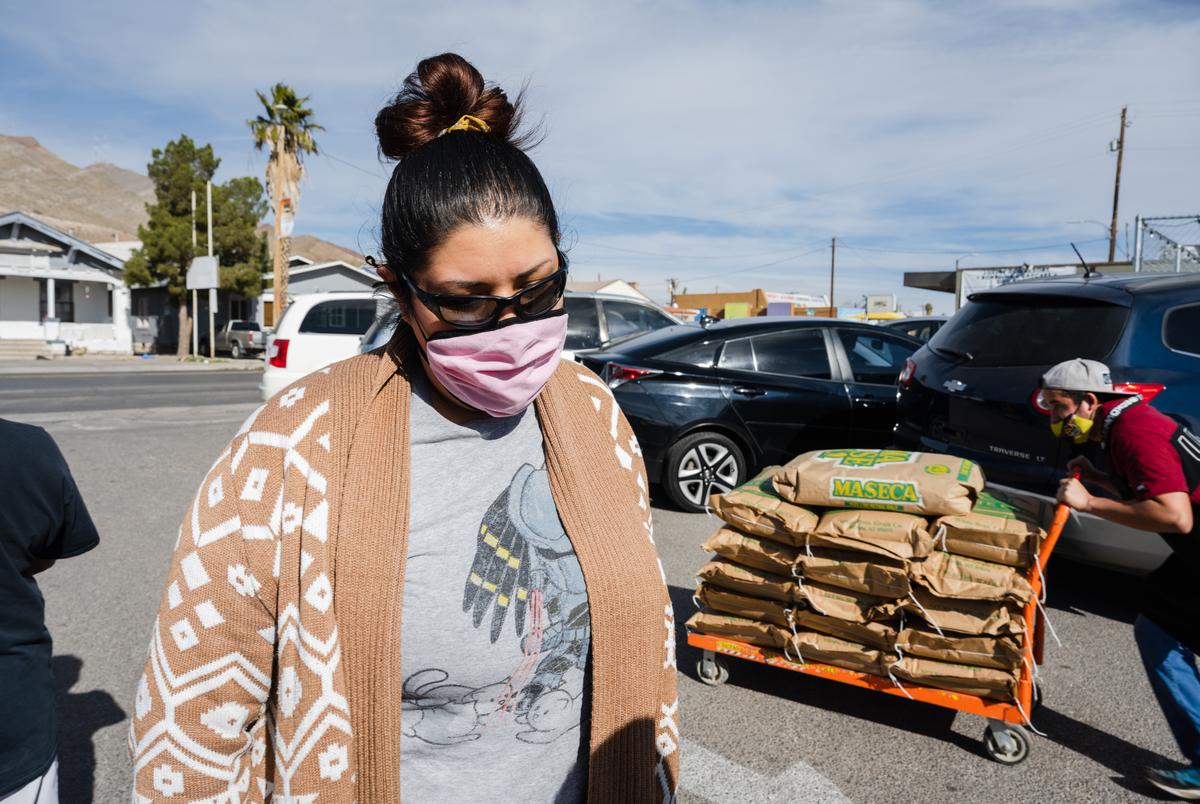 Monica Ponce, 35, waits in line at La Rotativa for nixtamal for her family’s Christmas menudo in El Paso on Thursday. Credit: Justin Hamel for The Texas Tribune

Among those in line was 35-year-old Monica Ponce, a retail employee who was on vacation from work. She expected to wait at least half an hour before she could enter. She was in line to buy corn hominy to make menudo for Christmas Day dinner, she said. Ponce, who was wearing a pink mask and sunglasses, said that while she is concerned about the pandemic, she avoids reading the news about it because it gives her anxiety and affects her mental health.

“I honestly try to put that out of sight, out of mind,” Ponce said of COVID-19.

She said she is aware that it is affecting people’s daily lives and it’s changing holiday plans for many. She said her friend’s mother and father recently died from complications with the virus. She is trying to do her part to stay safe by getting vaccinated, wearing a mask and avoiding holiday shopping.

She said her family agreed to not buy anyone Christmas gifts so they could avoid going out to crowded stores.

“It’s our little way of keeping ourselves safe,” she said. “Our gift this year to each other is still getting to sit around the table and share a meal together.”

Meanwhile, Lizette Chavez, a 36-year-old woman who works as a dispatcher for a trucking company, was at a park watching her 13-year-old son and other boys practice shooting a soccer ball into a goal as the boys’ coach instructed the players on their technique.

In previous years, during Christmas, the Chavez family was on their way to Anaheim, California, to spend Christmas Day at Disneyland Park. But with the new variant and with no end in sight for the pandemic, the family decided to stay put in El Paso and have a family cookout on Christmas Day, she said.

“It’s not worth the risk,” said Chavez, as she moved out of the way of a ball shot wide by one of the players.