A flood advisory in effect for Galveston County

A flood advisory in effect for Galveston County

A series of antisemitic incidents around Central Texas — including a potential arson outside an Austin synagogue this weekend — drew condemnation from a coalition of interfaith leaders and local politicians Monday.

“Hateful acts of intimidation to incite violence is unacceptable, and we will not be silent,” Simone Talma Flowers, the executive director of Interfaith Action of Central Texas, said at a press conference Monday. “We stand united with our Jewish community as they are targeted and victimized by acts of antisemitism.”

Flowers read from a statement signed by more than 500 people, including Austin Mayor Steve Adler and all 10 of his City Council colleagues. The incidents come as nearly 1 out of every 4 Jews in the U.S. indicate experiencing antisemitism over the past year, according to a recently released report by the American Jewish Committee.

On Sunday night, the Austin Fire Department received reports of a “small exterior fire” outside Congregation Beth Israel, a reform Jewish temple in Central Austin. While no injuries occurred, Capt. Brandon James said Monday that the fire caused about $25,000 in damages. A flammable liquid appeared to have been used to accelerate the fire, James said, and the event is under investigation as a potential arson.

The temple is continuing normal operations, Harold Wilensky, the director of community engagement at Congregation Beth Israel, told The Texas Tribune on Monday morning. It added additional security Monday, he said, because many doors were opened to air out smoke.

“We feel fortunate no one was really hurt,” Wilensky said. 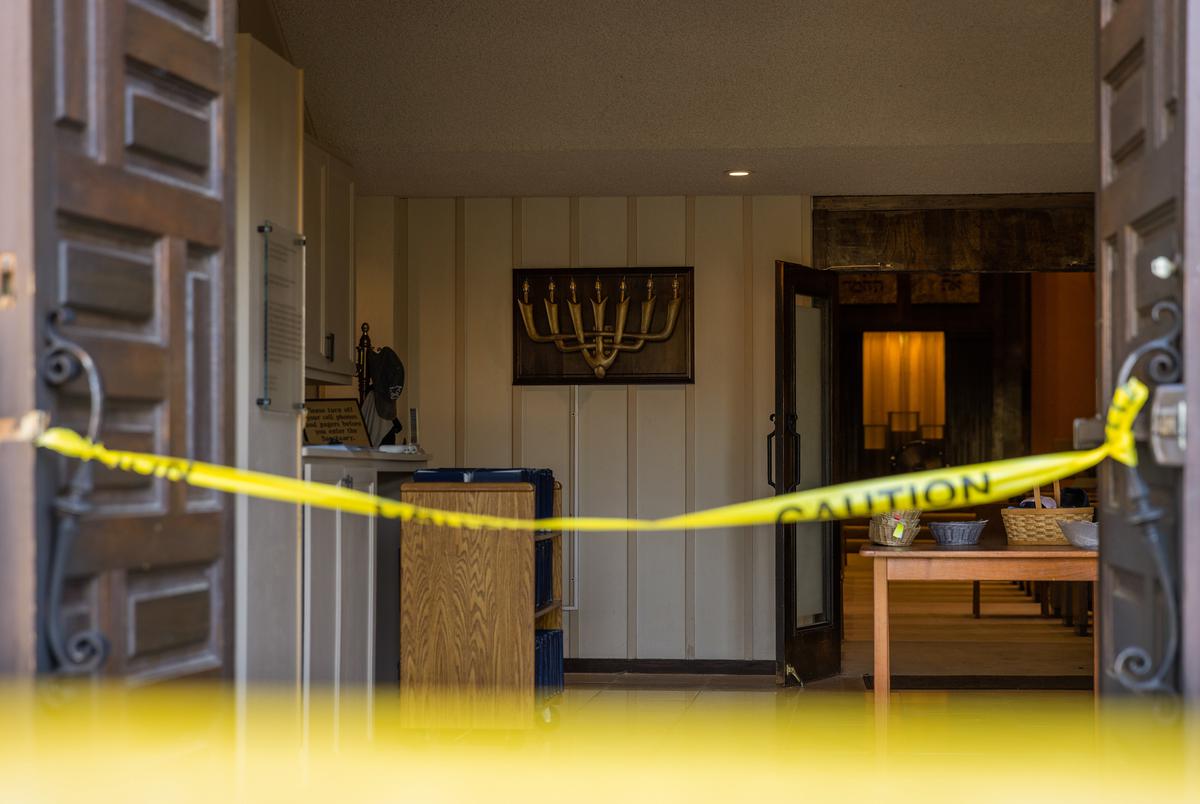 Outside of the sanctuary at Congregation Beth Israel on Nov. 1, 2021. Credit: Michael Gonzalez/The Texas Tribune
Ad 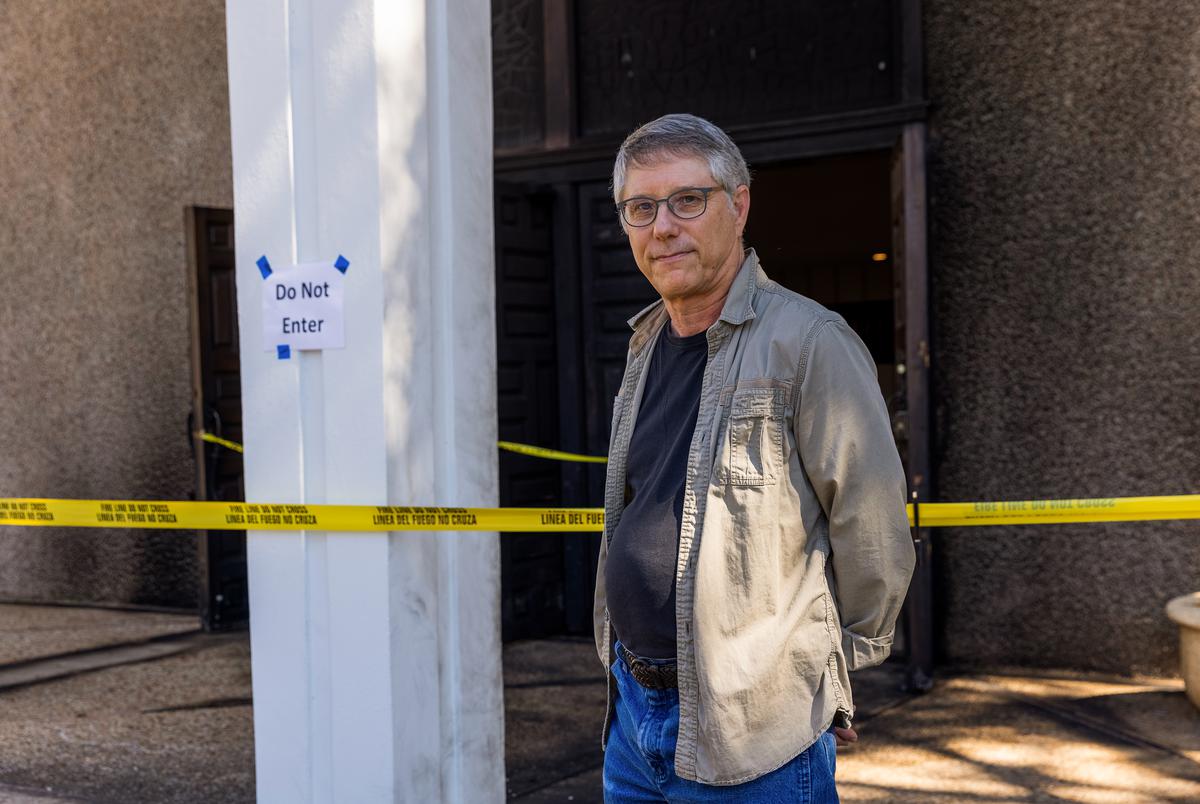 Steve Vladeck, a University of Texas at Austin law professor who belongs to the temple, wrote on Twitter that he is “horrified” such acts are happening in 2021.

The fire came after several recent instances of antisemitism in the Austin and San Antonio areas. On Oct. 22, students vandalized Austin’s Anderson High School with swastikas, homophobic language and anti-Black racist slurs. On Oct. 23, about a dozen people displayed a banner targeting Jewish people at an overpass on North MoPac Expressway. The banner included a link to a website for an antisemitic group that the Anti-Defamation League says includes neo-Nazis.

The same group’s name was printed this weekend on flyers scattered across the Willow Creek neighborhood in San Marcos. On Saturday, Melanie Liddle discovered a flyer espousing antisemitic tropes about media ownership in her driveway. Every driveway on her street had at least one. A police officer told Liddle that more than 200 flyers had been collected.

Liddle said she felt “disgusted and a little alarmed” upon finding the messages.

“I call this hate speech,” Liddle added. “To me, this is threatening our Jewish neighbors.”

A neo-Nazi group also reportedly protested outside a fundraiser for Israel in San Antonio, and two neighborhoods in that city saw antisemitic flyers left on lawns last month, according to Texas Public Radio.

At Monday’s press conference outside the Dell Jewish Community Center, Adler said it is important for leaders to disavow such acts because such hate could spread beyond the fringe. As a member of the Jewish community himself, Adler also thanked those who showed up. 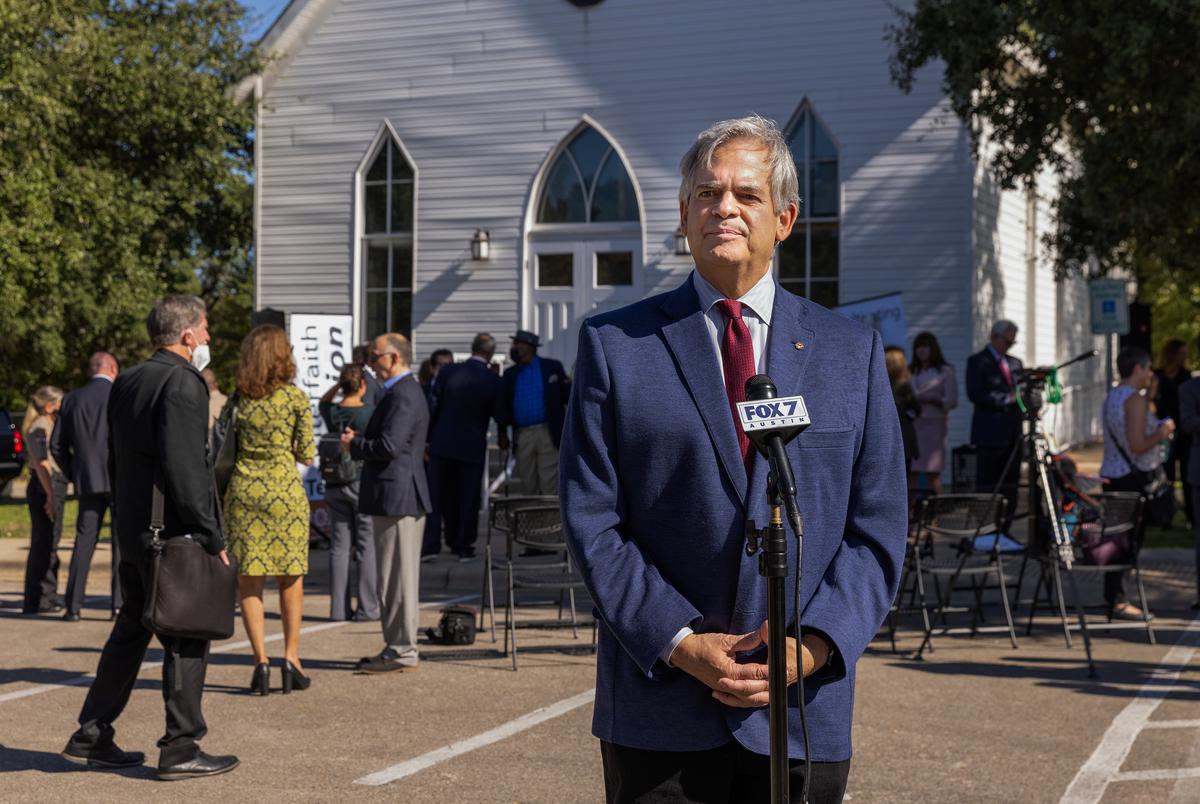 “As a community, we have everyone’s back,” Adler said Monday, flanked by leaders including state Reps. Donna Howard and Celia Israel. “That’s what this is today. That’s the message that we need to send.”

Given the recent events, Renee Lafair, regional director of the Anti-Defamation League in Austin, assured people at the press conference that her organization is working to ensure the safety of the Jewish community.

Kelly Levy, associate rabbi at Congregation Beth Israel, thanked the Austin Fire Department, which she said “greatly minimized the damage.” Levy called on public officials to condemn religious hatred and distance themselves from supporters who fuel it.

“The Jewish community stands with every marginalized community, with our interfaith siblings, with all of humanity,” Levy said. “We are asking you to continue standing with us now.”

Disclosure: Steve Adler, a former Texas Tribune board chair, and the University of Texas at Austin have been financial supporters of the Tribune, a nonprofit, nonpartisan news organization that is funded in part by donations from members, foundations and corporate sponsors. Financial supporters play no role in the Tribune's journalism. Find a complete list of them here.