By the time city crews demolished Austin’s most prominent homeless encampment, Dominek Palmer and her husband, Charles Taylor, had already tried to leave.

Two weeks ago, police cited Palmer and Taylor for violating the city’s voter-approved ban on homeless encampments — for sleeping in their car under Interstate 35 at the intersection of Seventh Street downtown.

When they tried to drive somewhere else, Palmer said, their car ran out of gas on a nearby hill.

The morning of Sept. 29, the camp’s remaining residents were told to leave under threat of arrest as crews with the Austin Public Works Department removed at least two dozen tents. Austin police parked a paddy wagon at the encampment — which was right across the street from police headquarters.

“That’s our housing?” Palmer said. “If we don’t leave or we can't get put up … y'all are offering us jail.”

Facing pressure from Gov. Greg Abbott, who championed a new statewide law banning camping in public places, Austin officials in recent weeks have cleared out the city’s most visible camps and sent a clear message to Austin’s homeless population: They are no longer welcome to live in plain view.

But Austin doesn’t have enough housing or shelter space for the estimated 3,000 residents experiencing homelessness.

With few choices, many Austinites experiencing homelessness have been forced to retreat out of sight for fear of getting ticketed or arrested. 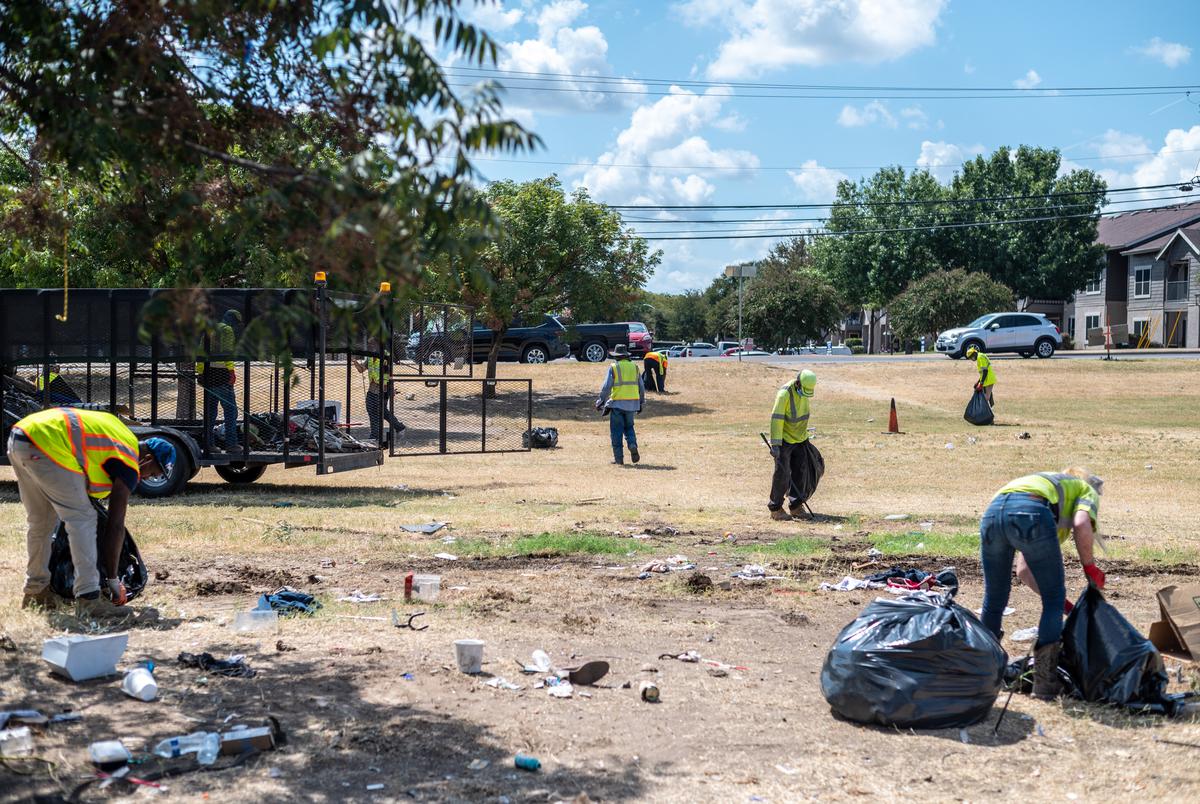 City workers clear out a former homeless encampment off Riverside Drive on Sept. 28, 2021 in Austin. Credit: Sergio Flores for The Texas Tribune 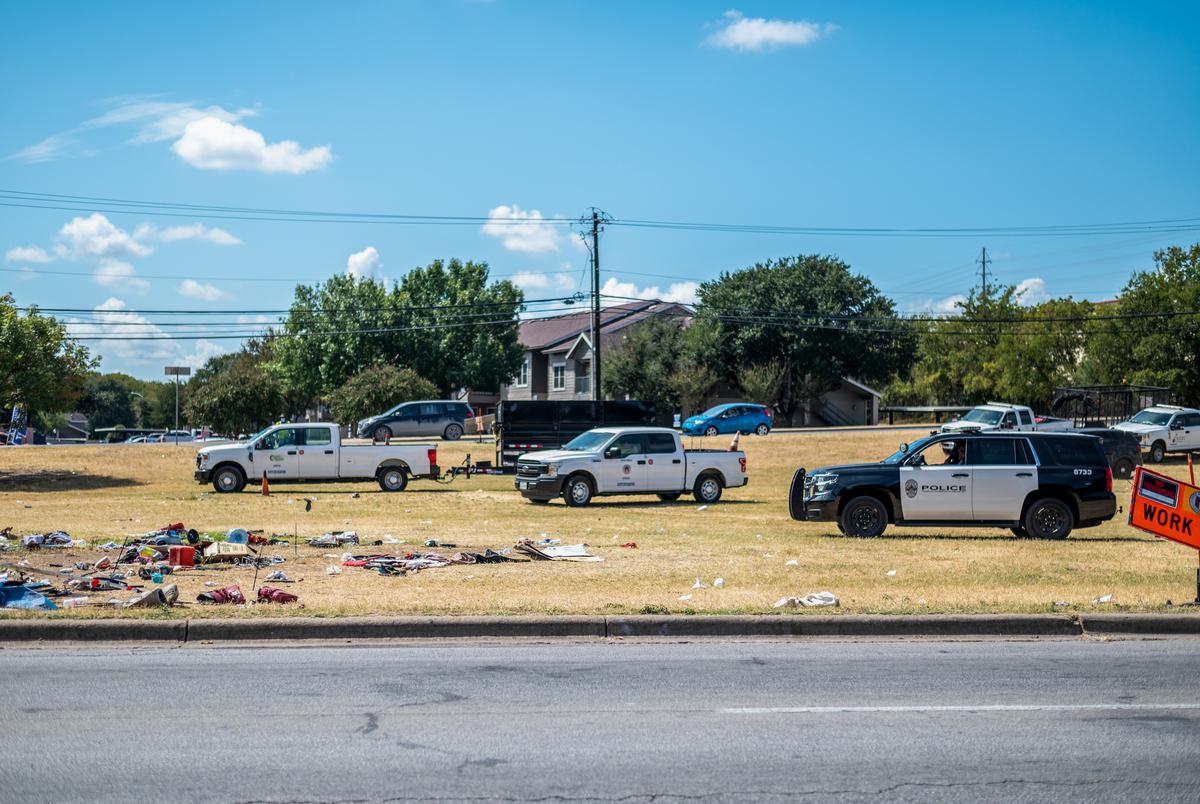 Many of the people who had been living in the camp said they weren't given enough notice and were not offered any place to stay. Credit: Sergio Flores for The Texas Tribune

City workers clear out a homeless encampment off Riverside Drive in Austin. Many of the people who had been living there said they weren’t given enough notice and were not offered any place to stay, although city officials maintain that police have been warning residents for months that the ordinance would require them to vacate the area. Credit: Sergio Flores for The Texas Tribune

For some, that means taking to the woods and pitching tents.

Sitting outside of a CVS pharmacy, John Nuñez watched city crews stuff tents, tarps and bedding into dump trucks as they cleared an encampment on the median at Pleasant Valley and Riverside Drive on Sept. 28.

Nuñez, 60, managed to convince employees of a nearby apartment complex to watch over some of his belongings — but still hauled a sizable amount, including a water jug, ice chest and outdoor grill.

Nuñez, who said he has been homeless for about two years, trekked to Austin from Big Spring last October when he learned that camping in public was allowed. Now, he’s adjusting to the new reality and said he planned to spend the night at a spot by a nearby creek.

“When the police see the camps ... they’re gonna come in now,” Nuñez said. “It used to be that they never came in there. Never.”

Austin has faced increasing pressure to crack down on homeless encampments after voters approved a May ballot measure reinstating a camping ban that the City Council had nixed two years ago. 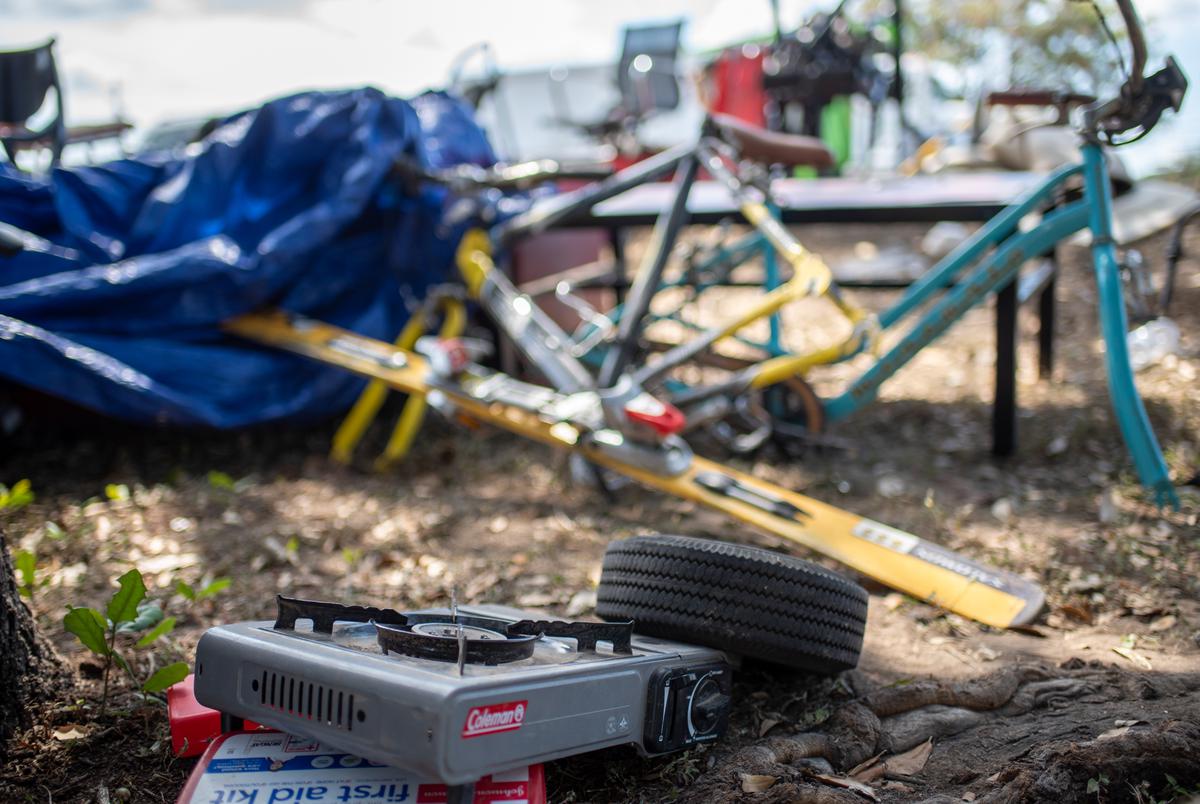 A propane burner and bike parts lay on the ground at the homeless encampment on Riverside Drive before it was cleared by city workers. Credit: Sergio Flores for The Texas Tribune

As of Monday, Austin officials had issued 506 warnings and 130 citations under the ban. One person has been arrested, but was put through the city’s diversion community court rather than being booked into jail.

But some have grown impatient with what they see as the city’s lax and gradual approach to enforcing the ban. A group of business owners along with Save Austin Now, the political action committee that pushed the measure, sued city leaders in August in a bid to force stricter enforcement.

Last month, Abbott and Attorney General Ken Paxton threatened to sue officials in Texas’ major cities if they flouted the state law — and pointed to more than $410 million in federal and state money available to help people experiencing homelessness.

“Local entities like yours should uphold the rule of law by enforcing this public camping ban,” Abbott and Paxton wrote in a Sept. 9 letter.

Austin spokesperson Yasmeen Hassan said the city worked to “close encampment sites with compassion,” sending police to encampments around the city in recent months to educate people about the camping ordinance and provide them with a list of resources. She added that police closed the I-35 camp "with no citations or arrests."

“APD and City partners are focused on taking a responsible and humane approach to enforcing laws against camping, and are working with the people who are impacted," she said, adding that while resources to address homelessness are increasing, overall community crisis shelter capacity remains limited. 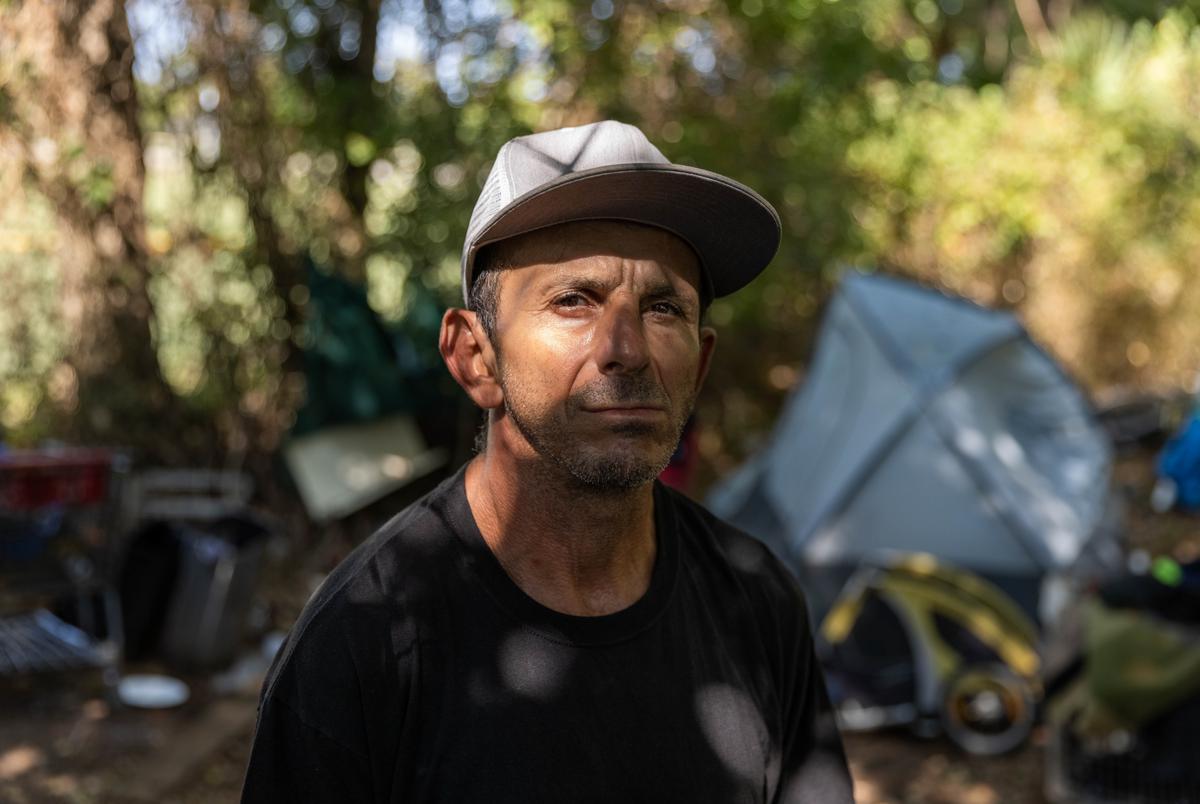 According to Austin’s Ending Community Homelessness Coalition, the city currently has just over 1,800 shelter beds and housing units for people experiencing homelessness, and space in Austin’s shelters has been tight since the start of the COVID-19 pandemic — the result of protocols limiting the number of people in shelters in order to slow the virus’ spread.

Local officials have embarked on a $306 million goal to build 3,000 dwelling units for people experiencing homelessness — with Austin and Travis County together pitching in $216 million, with plans to raise the remaining $90 million from the private sector. But those units wouldn’t be finished until 2024.

In the meantime, the camping ban has made it “incredibly more difficult and much less efficient” to find people experiencing homelessness and connect them with the help they need, said Mark Hilbelink, director of Austin’s Sunrise Homeless Navigation Center. The large-scale encampments made that task easier, he said. 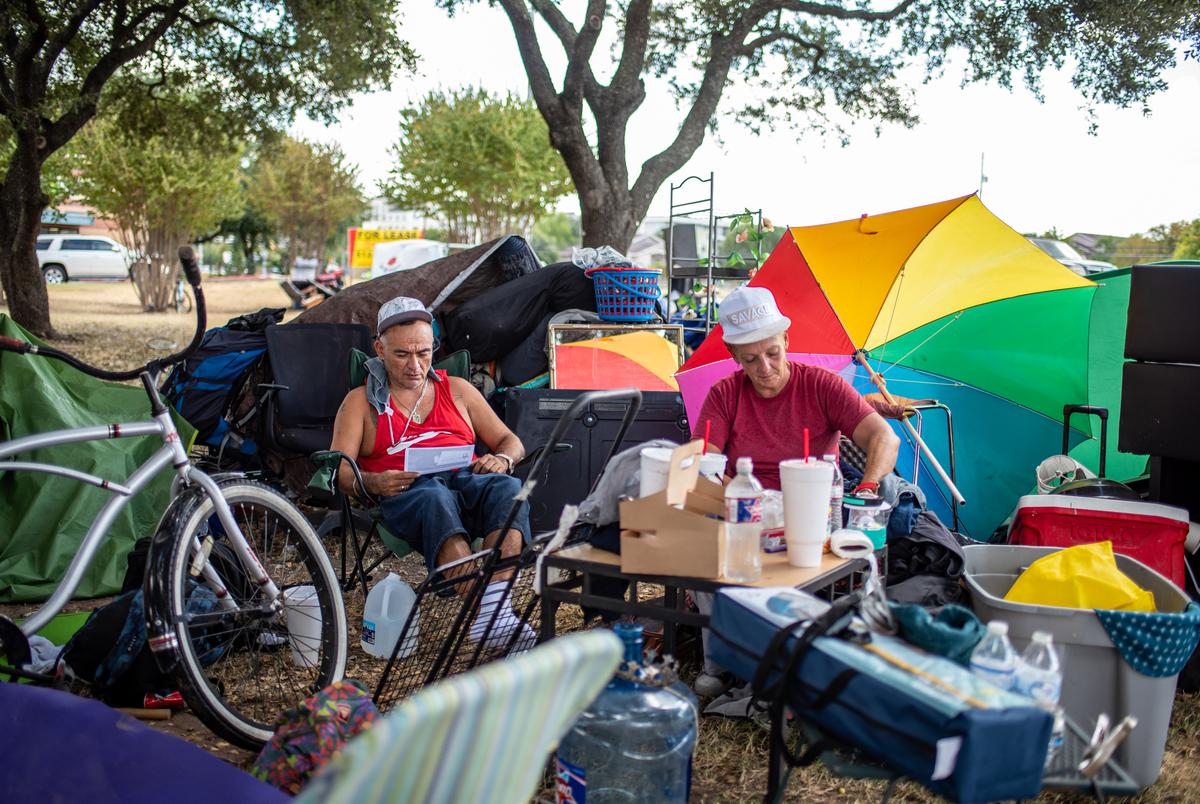 Adrian Elliot and Shirley Crawford were at the encampment on Riverside Drive before it was cleared. Credit: Sergio Flores for The Texas Tribune

“Where are we going?”

Shirley Crawford, a 54-year-old resident of the Riverside encampment, spent a week packing up her belongings ahead of the camp’s clearing.

As Crawford sorted through furniture and appliances near a shopping center parking lot just off the median late Tuesday morning, heading into the woods of a nearby park — where the number of people camping has grown as police and city crews clear out encampments in Southeast Austin — seemed like the only option.

Crawford’s sister resides in Austin but lives in Section 8 housing, which carries strict rules on how long visitors can stay — so staying with her isn’t a long-term option.

Some of the people from the encampment discussed just moving back onto the median after the police and city crews left, but to Crawford, that was off the table. She had been cited once for trespassing — and didn’t want to risk a ticket or arrest for another offense for fear it could harm her chances of securing permanent housing.

“I don't have time to go to jail,” Crawford said. “And I don't want that on my record.”

For Felix Gonzales and his dog, Pablo, there’s nowhere to go but the woods.

For a year and a half, Gonzales made his home an encampment under a bridge along Seventh Street near Pleasant Valley Road on Austin’s East Side. There, he had access to food, water and electricity. The homeless camp even had regular trash pickup, he said.

But authorities came in and cleared out the encampment in early August. Police officers told residents that the two hotels the city owns specifically to house the homeless didn’t have room for them, Gonzales said.

“All these people are looking for a place to go now,” Gonzales said. “Here comes quite a big question: Where are we going? Shoot, anywhere it’s safe and out of sight, out of mind.”

Over the years, Juan Gomez has all but built a house in the woods, assembled from plywood, glass and other materials salvaged from trash bins.

Gomez allowed Gonzales to set up his tent there — and to bring Pablo. The two said they knew each other from a stint in Mexican prison, though they wouldn’t say why they were convicted. But Gonzales said his time in the prison gave him post-traumatic stress disorder — which he said keeps him from holding a regular job.

“We have a plight, man,” Gonzales said. “We're not ... just people that want to be homeless and go in your fucking trash, or pick up cans. People are homeless because we have problems.”

Nonprofits have helped some folks from the encampments rent motel rooms temporarily. But that has only put off an uncertain fate.

Billy Smith, who had lived at the I-35 encampment for a year, moved to a motel room paid for by a friend.

Jennifer Wyder, 37, said she didn’t know where she would go after the I-35 camp was cleared.

The South Carolina native said her immediate family members are either dead or in prison, and her two daughters are in the foster care system.

As the sun set behind the downtown Austin skyline the evening before the clearing, Wyder sat outside of her tent in tears.

The next morning, she was gone.